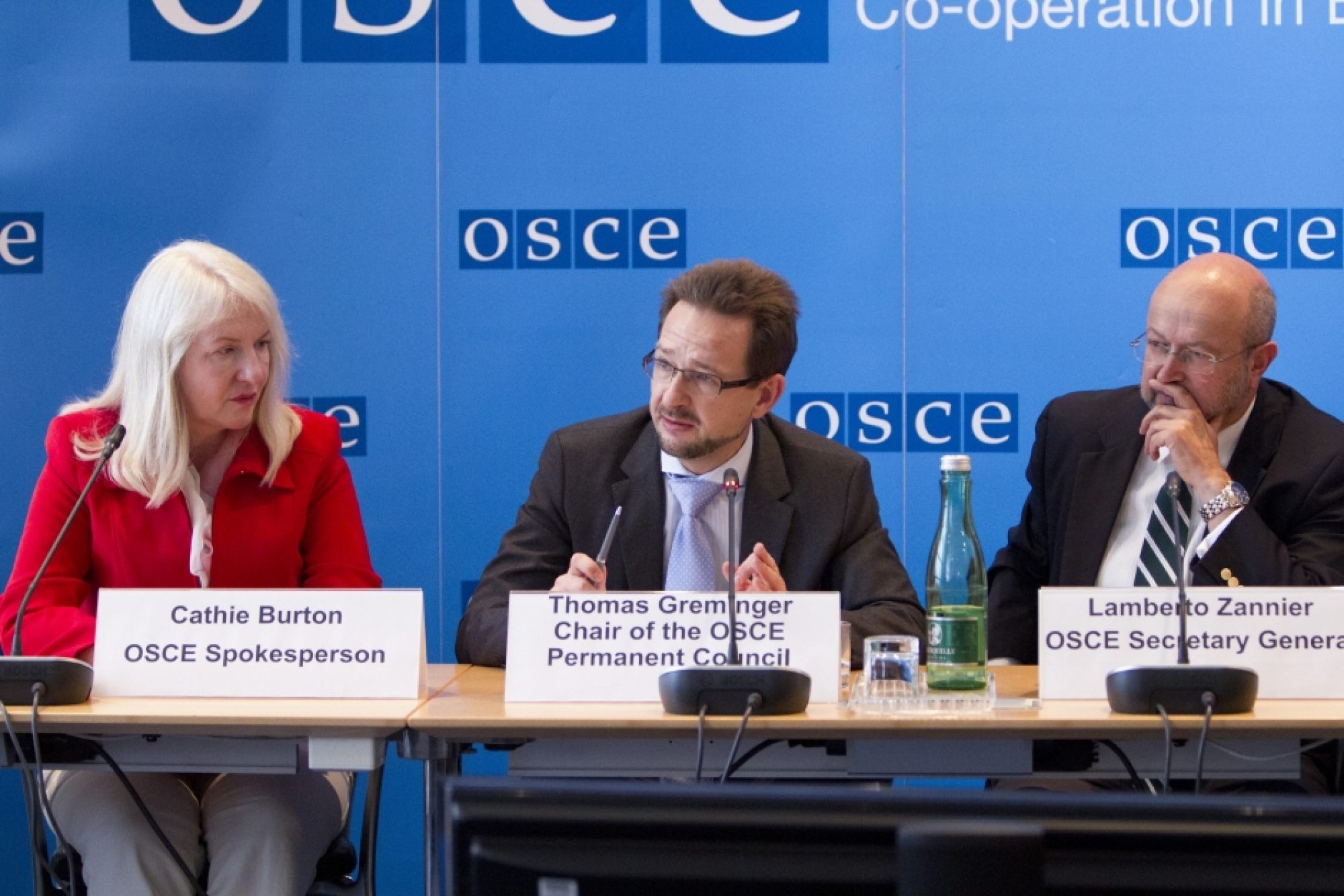 The OSCE has a “dual leadership“: a Chairmanship that rotates on a yearly basis and a Secretary General (SG) who is appointed for three years with the possibility of extension for a second term. Which state will chair the Organization is usually decided two years in advance by a consensus decision of the OSCE Ministerial Council (MC). (There are some exceptions to this, as in the past decisions on the next Chairmanship have been taken more than two years or less than two years in advance.) The mandates and roles of the Chairmanship and the SG are defined in respective MC decisions. In general, the Chair’s role is political, whereas the SG is mainly concerned with executing the consensus decisions of the participating States in his role as “chief administrative officer”. This system has its upsides as it ensures some power-sharing and a division of responsibilities between the SG and the Chairmanship; yet it also has its downsides and therefore is in need of some improvement. A discussion on how to improve the system has been launched in a guest blog entry by the Swiss think tank ‘foraus’, in which the idea of a permanent Swiss Chairmanship was floated as a solution to some of the problems inherent in the current OSCE Chairmanship model. As this suggestion was considered “illogical, unrealistic and undesirable” in my blog entry of 28 July, this present blog entry will provide some alternative suggestions that could help strengthen the OSCE leadership, especially in crisis situations.

At the beginning of each year, the Chairperson-in-Office – usually the foreign minister of the country assuming the OSCE Chairmanship – will present the political priorities of the Chairmanship to the OSCE Permanent Council (PC). These priorities vary considerably from year to year. A brief look at the priorities of the last three Chairmanships will illustrate this point. For example, Ireland in 2012 focused on improving protection of freedom of expression in the digital age, improving good governance and promoting settlement of the protracted conflicts. When Ukraine assumed the OSCE Chairmanship in 2013, then foreign minister Leonid Kozhara presented the issues of energy security, countering transnational threats, improving arms control and reinvigorating negotiations on the protracted conflicts as priorities. This year, Switzerland presented a comprehensive set of priorities, including reconciliation in the Western Balkans, confidence-building in the southern Caucasus, modernizing the Vienna Document, improving management of natural disasters and strengthening mediation capacities. Hence, the yearly changing priorities and the resulting lack of continuity and systematic follow-up lead to an unfocused OSCE agenda. It would therefore make more sense to focus on a more limited number of topics and to ensure continuity so that the momentum does not get lost. This could be achieved by agreeing more often on ‘consecutive Chairmanships’ – a model introduced for the first time for the consecutive Chairs of Switzerland and Serbia in 2014 and 2015, respectively. Switzerland and Serbia presented a joint work-plan that provides for some more continuity in priorities. For example, the focus on achieving reconciliation in the Western Balkans will be kept for two consecutive years and for this purpose a Special OSCE Representative for the Western Balkans from Switzerland was appointed for the duration of two years between 2014 and 2015.

Another solution to improve continuity would be the introduction of a rotating Chairmanship system similar to that of the Council of Europe (CoE). In the CoE, ‘presidencies’ rotate in alphabetical order. This system ensures that the future chairing countries are known many years in advance, unlike in the OSCE where it is still unclear which state will chair the Organization after Serbia in 2016. Having an automatic rotation system would enable better planning and provide the opportunity to states to coordinate their priorities and thus ensure continuity and follow-up.

Chairmanship as “first among equals”

Yet, the best of planning and coordination may sometimes be torpedoed by political realities. The eruption of an acute crisis in the OSCE area (such as the one in Ukraine) will require the full attention of the Chairmanship and at that moment individual priorities may recede into the background. The concern expressed in the ‘foraus’ guest blog entry that states holding the Chairmanship may have a biased view on a conflict or an acute crisis and may therefore not be in a position to lead the Organization or help with brokering settlement and consensus is however only partially valid. In effect, the powers of the Chairmanship are defined by its mandate and limited by the fact that decisions in the OSCE have to be taken by consensus. According to decision No. 8 of the 2002 Porto OSCE MC, the Chair must ensure that “its actions are not inconsistent with positions agreed by all the participating States and that the whole spectrum of opinions of participating States is taken into account.” Furthermore, as laid down in PC decision No. 485, the foreign minister of the country holding the OSCE Chairmanship is not allowed to express national positions in his or her capacity as OSCE Chairperson-in-Office. Hence, as analyzed by Walter Kemp in a previous article for ‘Security and Human Rights’, the state holding the OSCE Chairmanship “is merely the first among equals for a year” and its “political power is largely a myth.”

Chairmanship as party to a conflict

Yet, there may well be a situation when a chairing country may not be in an ideal position to lead the Organization or to help settle an acute crisis. This may be the case when the Chairmanship is a party to the conflict in question. For example, what would have happened if Ukraine had held the OSCE Chairmanship this year instead of last year? Such a scenario may well have paralyzed the Organization. How can a state that has to deal with a separatist movement and a claim on part of its territory by another OSCE participating State lead the Organization and help with negotiating an end to this very conflict? In this sense, colleagues from ‘foraus’ are right when they say that Switzerland’s Chairmanship of the OSCE in 2014 was due to “fortunate circumstances” and Switzerland now “finds itself in an excellent position to play the role of an honest broker.”

Strengthening crisis management capabilities and the role of the Secretary General

Therefore, additional solutions are necessary to improve OSCE leadership especially during acute crisis situations. One possibility would be to enhance the role of the OSCE SG. According to decision No. 15 of the 2004 Sofia OSCE Ministerial Council, the SG “derives his/her authority from the collective decisions of the participating States”. The SG “ensures implementation of the decisions of the OSCE” and “acts as the representative of the Chairman-in-Office”. His main task is that of a “chief administrative officer”. Several attempts have been made to enhance the role of the SG. (For example by the 2005 Panel of Eminent Persons or within the Helsinki+40 process). However, so far the 2004 mandate of the SG has not been changed but the role of the SG and the OSCE Secretariat have been strengthened in specific programmatic areas. For example, the 2011 Ministerial decision on “elements of the conflict cycle” contains a number of passages that deal with the role of the SG in conflict situations. The decision tasks the SG with providing early warning to participating States by drawing attention to emerging tensions or conflicts in the OSCE area and to suggest possible options for timely responses to conflicts. This decision has increased the SG’s involvement in the political dialogue. In addition, as a result of the decision, the OSCE Secretariat’s Conflict Prevention Center has developed an early warning methodology as well as internal guidelines, has appointed focal points and has created a roster of OSCE staff that can be deployed to crisis situations on the ground within 24 hours (as was demonstrated with the advance team of the Special Monitoring Mission to Ukraine).

Yet, the SG’s request for a modest ‘conflict management and crisis fund’ that would help to fully implement this 2011 Ministerial decision was rejected by OSCE participating States. Such a fund with increased resources could further strengthen the role of the SG and the Secretariat in responding to a crisis at an early stage and could provide additional support to the Chairmanship in acute crisis situations.

In conclusion, a model similar to that of the CoE where the future chairing countries are known well in advance could be introduced in the OSCE as this would give participating States the opportunity to coordinate priorities and ensure follow-up of priorities. Alternatively, participating States could try to agree more often on ‘consecutive Chairmanships’, who in turn could present joint work-plans as done by Switzerland and Serbia for 2014 and 2015. In addition, strengthening the SG and the OSCE Secretariat in specific programmatic areas such as in the areas of early warning or conflict management could provide additional support to the Chairmanship and could thus lead to better crisis management but also to improved continuity, follow-up, institutional knowledge and planning.