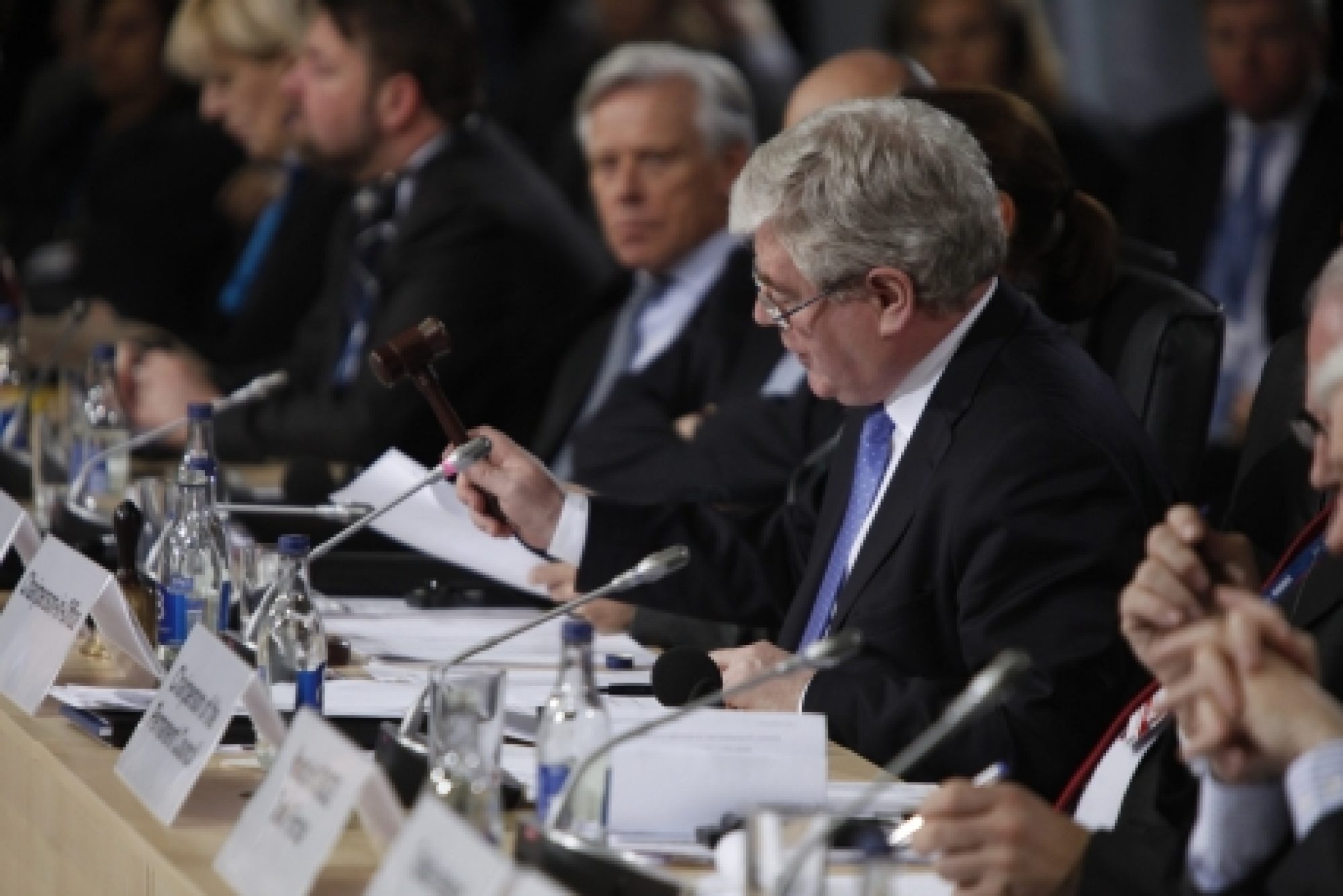 The Helsinki+40 Process: Determining the Future of the OSCE

Many times, reference has been made in this blog to the so-called Helsinki+40 process. What are the origins of this multilateral discussion process and what does it stand for? Has any progress been made so far and how likely are any concrete, landmark achievements by 2015? The Helsinki+40 process was decided upon at the 2012 Dublin OSCE Ministerial Council meeting “as an inclusive effort by all participating States to provide strong and continuous political impetus to advancing work towards a security community, and further strengthening co-operation in the OSCE on the way towards 2015, a year that marks four decades since the signing of the Helsinki Final Act.” In other words, the Ministerial decision on the Helsinki+40 process provided a roadmap for a multilateral discussion process on the future of the OSCE with the ultimate aim of setting up a “genuine security community.” (See previous blog on this topic).

Discussions on a new and improved European security architecture were sparked in 2008 when the then Russian President Dimitry Medvedev proposed a new European Security Treaty in a speech at a meeting with German political, parliamentary and civic leaders in Berlin.[1] This proposal shook up European leaders and certainly did not go unnoticed in the OSCE. Hence, in 2009 the Greek OSCE Chairmanship initiated a series of political consultations with the aim of restoring confidence and carrying forward dialogue on wider European security. This consultation process came to be known as the “Corfu process” after an informal ministerial conference on that Greek island. As a follow-up, under the 2010 Kazakh OSCE Chairmanship, the Astana Commemorative Declaration Towards a Security Community was adopted, in which participating States recommitted themselves to the vision of a “free, democratic, common and indivisible Euro-Atlantic and Eurasian security community stretching from Vancouver to Vladivostok, rooted in agreed principles, shared commitments and common goals.” However, while the Summit participants were able to agree on a common vision in the Astana Declaration, they could not reach consensus on a Plan of Action that would move them closer to that goal. As a result, the task fell to future Chairmanships, starting with Lithuania.

Under the 2011 Lithuanian and the 2012 Irish OSCE Chairmanships, the dialogue was continued and eventually led to the adoption of the Helsinki+40 decision at the Dublin OSCE Ministerial Council meeting. The decision was viewed by many as a disappointment, as it failed to address substantive topics that needed to be reconciled among participating States. Due to the failure to agree on the substance, the decision provided participating States with a timeframe of another three years until 2015 to find solutions to their differences and to determine the future role of the OSCE in the changing security environment. The task of determining the topics to be discussed was given to the subsequent Ukrainian, Swiss and Serbian Chairmanships that were asked to “pursue the Helsinki+40 process on the basis of a co-ordinated strategic approach, adding a multi-year perspective and continuity to participating States’ work towards a security community.” While a number of meetings have been held on the Helsinki+40 process under Ukraine’s Chairmanship, expectations are low as to what can actually be achieved before the Ministerial meeting in Kyiv.

That said, basic parameters seem to be emerging. There are hopes that in 2015 there will be a “landmark document” that will “consolidate the common acquis achieved during the last 40 years and provide strategic guidance for the Organization’s future work.” It is also hoped that a roadmap will soon emerge that will sketch out possible “deliverables” across seven thematic areas, including: (i) OSCE conflict cycle; (ii) protracted conflicts; (iii) conventional arms control and confidence- and security-building measures; (iv) transnational threats; (v) economic and environmental issues; (vi) implementation of OSCE commitments, in particular those belonging to the human dimension; and (vii) effectiveness and efficiency of the OSCE (including OSCE working methods and practices, discussions on the legal personality of the OSCE as well as improving the work of OSCE field operations).

If handled badly, the process could actually reinforce the OSCE’s image as an introspective talking shop. If given some political impetus and fresh energy, the process could make the OSCE better equipped and positioned to deal with contemporary threats and challenges. The clock is ticking.