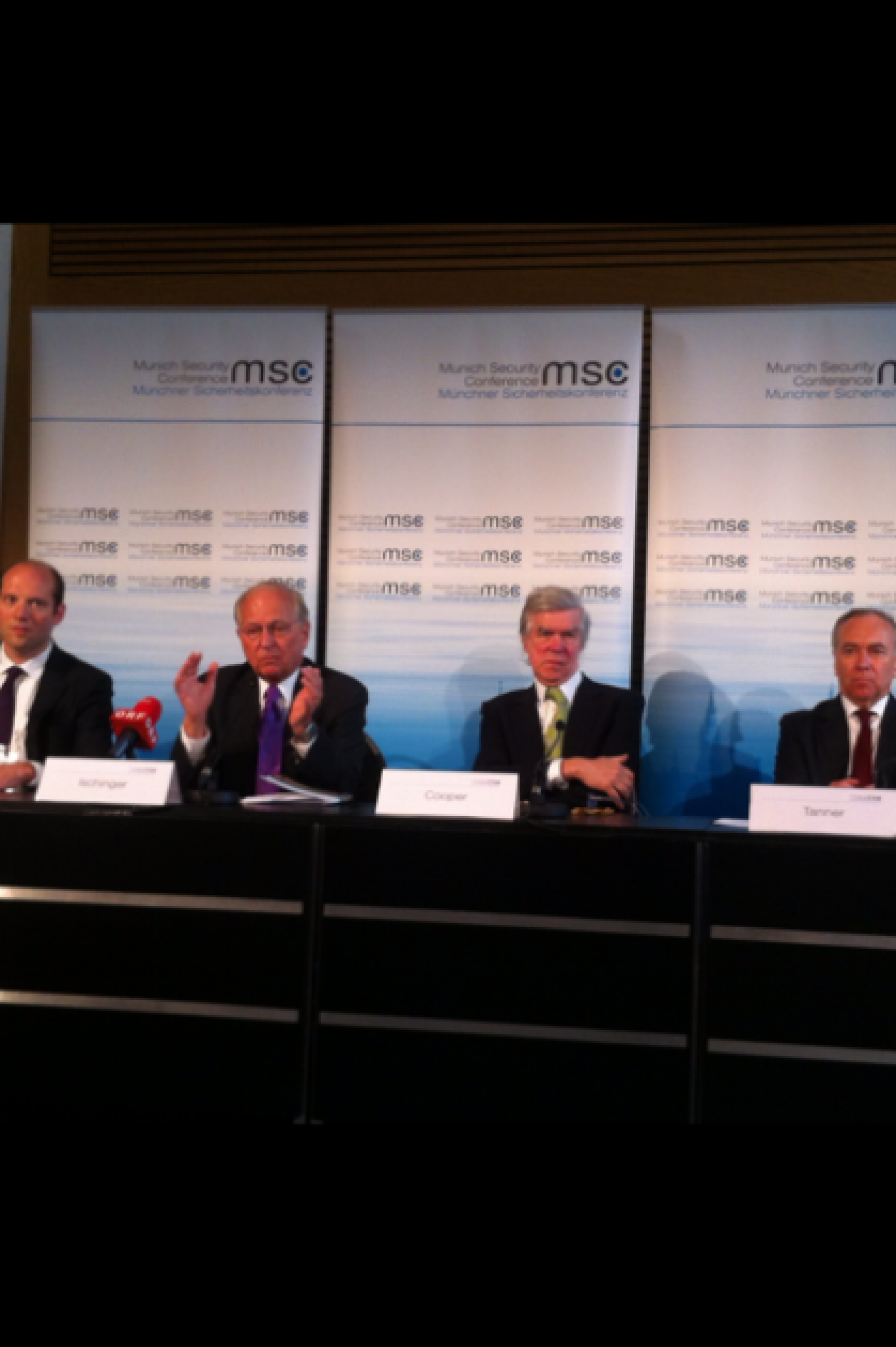 Panel of Eminent Persons Report on Ukraine: A Lot of Validity but no Real Novelty

On 16 and 17 June, the Core Group Meeting of the Munich Security Conference (MSC) took place in Vienna, Austria. The meeting brought together an impressive amount of high-ranking participants from governments, the private sector, media and academia, who discussed in an off-the-record setting a number of pressing, international issues.

On the margins of that conference, Ambassador Wolfgang Ischinger presented to the media the OSCE Panel of Eminent Persons interim report on ‘lessons learned for the OSCE from its engagement in Ukraine’. After it was not possible to reach consensus on establishing a Panel of Eminent Persons at the OSCE Ministerial Council in Basel last December, the Panel of fifteen experts was nevertheless formed and was tasked by the 2015 Troika (Switzerland, Serbia and Germany) to develop ideas on how to reconsolidate European security as a common project. The Panel’s interim report provides recommendations on the following five topics: (i) conflict prevention; (ii) leadership; (iii) need for a legal personality; (iv) primacy of politics; (v) capacity and cooperation.

Many of the recommendations made by the Panel of Eminent Persons in this interim report have been made before, notably by the 2005 Panel of Eminent Persons in its report entitled ‘common purpose’ as well as in the course of more recent discussions within the Helsinki+40 process. What is new is how to apply these often-discussed views in the context of a very real crisis in Ukraine, and how to help the OSCE enhance its effectiveness in dealing with one of the most serious tests that it has ever faced.

The report’s first recommendation suggests that “[t]he OSCE should give priority to conflict prevention and should empower the Secretary General to act on its behalf in pursuit of this objective.” This issue became particularly acute since it seemed that the OSCE could not predict events in Ukraine and was thus not able to engage in effective conflict prevention. This recommendation is not very innovative. Indeed, it should be noted, that the Secretary General (SG) already has a mandate for early warning and conflict prevention. The 2011 Vilnius Ministerial Council decision (No. 3/11) tasks the SG to “provide early warning to the participating States by bringing to the attention of the Permanent Council any situation of emerging tensions or conflicts in the OSCE area.” The SG can also suggest to participating States “possible options for timely and effective response”. The SG has stated on numerous occasions that he would need adequate human and financial resources to implement this mandate effectively. He suggested the creation of a moderate ‘conflict management and crisis fund’. Hence, it seems that the problem is not the lack of a mandate but rather the lack of financial resources that would enable the SG to carry out his mandate effectively, as well as a hesitancy by the SG to be too outspoken. In addition, for early warning and conflict prevention to work effectively, not only the SG but also field operations should be mandated to contribute to this effort. Yet, in a number of cases, OSCE field operations do not have the mandate for political reporting and early warning. This issue should not be overlooked.

The report’s second recommendation relates to the importance of leadership. This is particularly important and many of the suggestions made by the Panel in its report have in fact been discussed on this blog in July 2014. The OSCE has a “dual leadership“: a Chairmanship that rotates on a yearly basis and a Secretary General who is appointed for three years with the possibility of extension for a second term. In general, the Chair’s role is political, whereas the SG is mainly concerned with executing the consensus decisions of the participating States in his role as “chief administrative officer”. The Ukraine crisis exposed the importance of having a capable Chairmanship at the helm of the Organization that is in a position – politically and practically – to respond to a rapidly escalating crisis. Switzerland was in an ideal position to respond to the unfolding crisis in Ukraine as it was accepted as neutral broker by all sides and had sufficient financial and human resources at its disposal. Furthermore, the Swiss Foreign Minister also had the unique advantage of also being the President giving him valuable access to his peers at the highest level.

The Panel suggests that the OSCE should “[d]evelop the Troika as a system for continuity and mutual support” and adds that the OSCE should “[e]nsure (multi-year) continuity of joint work programmes […]”. This suggestion is very valid. Indeed, the joint Swiss-Serbian work-plan ensured that certain priorities were kept on the OSCE’s agenda for at least two years. In addition, making better use of the Troika system may help weaker Chairmanships during crisis situations.

Yet, the fact that Chairmanships rotate every year still leads to a lack of continuity in leadership which is why strengthening the role of the SG is equally important. This can be done by providing the SG with a crisis and conflict prevention fund as stressed above and also by giving him the possibility to appoint and dismiss Heads of Field Operations, as the report rightly suggests. Already in 2005, the Panel of Eminent Persons suggested that the SG should “[p]lay a more active role in the operational management of field operations.” For this to work, it would make sense to go one step further and professionalize Heads of Mission posts so that they are paid for by the OSCE rather than seconded.

The third recommendation suggests that the OSCE should resolve the question of its legal personality. As the report starkly points out, this issue has been exposed in a dramatic way by the crisis in Ukraine, when OSCE personnel had to work without privileges and immunities in a volatile conflict situation for several weeks, before the Memorandum of Understanding between Ukraine and the OSCE was signed and ratified. Yet, the discussions on a legal personality for the OSCE have been going on for over 20 years, starting with the decision of the 1993 CSCE Rome Council on Legal Capacity of CSCE Institutions and Privileges and Immunities. The issue was given new impetus when the 2005 Panel of Eminent Persons recommended to “agree on a convention recognizing the OSCE’s legal capacity and granting privileges and immunities to the OSCE and its officials.” While in 2007 a Convention was finally agreed upon, a group of states want to make the adoption of a Convention depended on the adoption of a Charter. This led to deadlock and has not been resolved until today. Thus, what is really needed is a breakthrough in negotiations as there is already agreement among participating States that the issue of lack of legal personality has to be resolved. In that respect, the report states an obvious problem without bringing participating States any close to a solution.

The Panel’s fourth recommendation on “the primacy of politics” stresses the link between the political and operational arms of the OSCE. The Panel suggests that OSCE field operations should “support an active political strategy to end conflict” and that the OSCE Special Monitoring Mission should “move in the direction of de-escalation and reconciliation”. In this context, the Panel rightly stresses that the OSCE has a comparative advantage by being able to “engage with people and bodies whose status is disputed […]”, for example through the Trilateral Contact Group. Yet, the Panel also concedes that the SMM has been facing major problems while trying to support political strategies to end conflict. The SMM has had difficulties to fully implement the tasks that it was given under the Minsk Agreements because high-level politics seemed disconnected from the reality of events on the ground. In that regard, it seems odd that the OSCE is not part of the Normandy Group since it is often tasked by the latter to do things. For example, the SMM has been instructed to monitor the withdrawal of heavy weapons but has not been given security and access to do so. If indeed the SMM should focus on helping to implement agreements that have been struck on high-level (such as the Minsk Agreements) and help to deescalate the situation on the ground, it might need additional expertise from military peacekeepers. This is an issue that OSCE participating States will have to face sooner or later since the situation on the ground in Ukraine has rapidly developed from a crisis/pre-conflict situation into an active conflict with people shooting at each other. Hence, more thought should now be going into how to bridge the gap between civilian observer and military peacekeeping missions. Unfortunately, the Panel does not seem to have given this issue much thought.

The Panel report also stresses the need for more effective border control between Ukraine and Russia. It also calls for more effective reporting, including through the use of technology like satellite images. These are good ideas, but they do not seem likely to be implemented under current conditions.

In its fifth section called “Capacity and Cooperation”, the Panel suggests strengthening the capacity of the OSCE Secretariat in order for it to be in a better position to respond to an erupting crisis. The Panel suggests, inter alia, that the OSCE should allow the SG to “retain a limited number of key staff beyond the normal duration, or to allow staff to return to the Organization.” This issue of keeping staff beyond the 10-year rule has been discussed in the past with the 2005 Panel suggesting that “ways should be considered to enable the Organization to retain staff […] for a sufficiently long period in order to preserve continuity.” Hence, again this recommendation is not new but it continues to be valid. The interim report furthermore suggests that the SG should be given the authority to redeploy funds in emergency situations, to improve military skills and planning, and to look into future areas where technical means (UAVs, satellites, mobile cameras etc.) can support the OSCE’s work. All of these recommendations are certainly valid and should be looked into.

In conclusion, the interim report of the Panel of Eminent Persons contains a number of important “lessons learned” and related recommendations that participating States should look into. Yet, many of these recommendations are not new and have been discussed in the past without participating States being able to agree on them. Indeed, the Panel itself was not always in agreement about several of the recommendations. The report contains several footnotes that reflect dissenting views expressed by the Russian member of the Panel, Sergey Karaganov. Therefore, it will be difficult for states to agree on implementing the recommendations from a Panel that seemed in disagreement on a number of important issues, such as strengthening the role of the SG or the OSCE’s legal personality.

While this first report was very much focused on the OSCE’s response to the crisis in Ukraine, the second report (due in late November) will look at the bigger picture of how to restore trust and cooperation in Europe. If reaching consensus on the first report was difficult, finding common ground for the second will be almost impossible. But fresh ideas for restoring order in Europe are badly needed, so let’s see what they come up with.