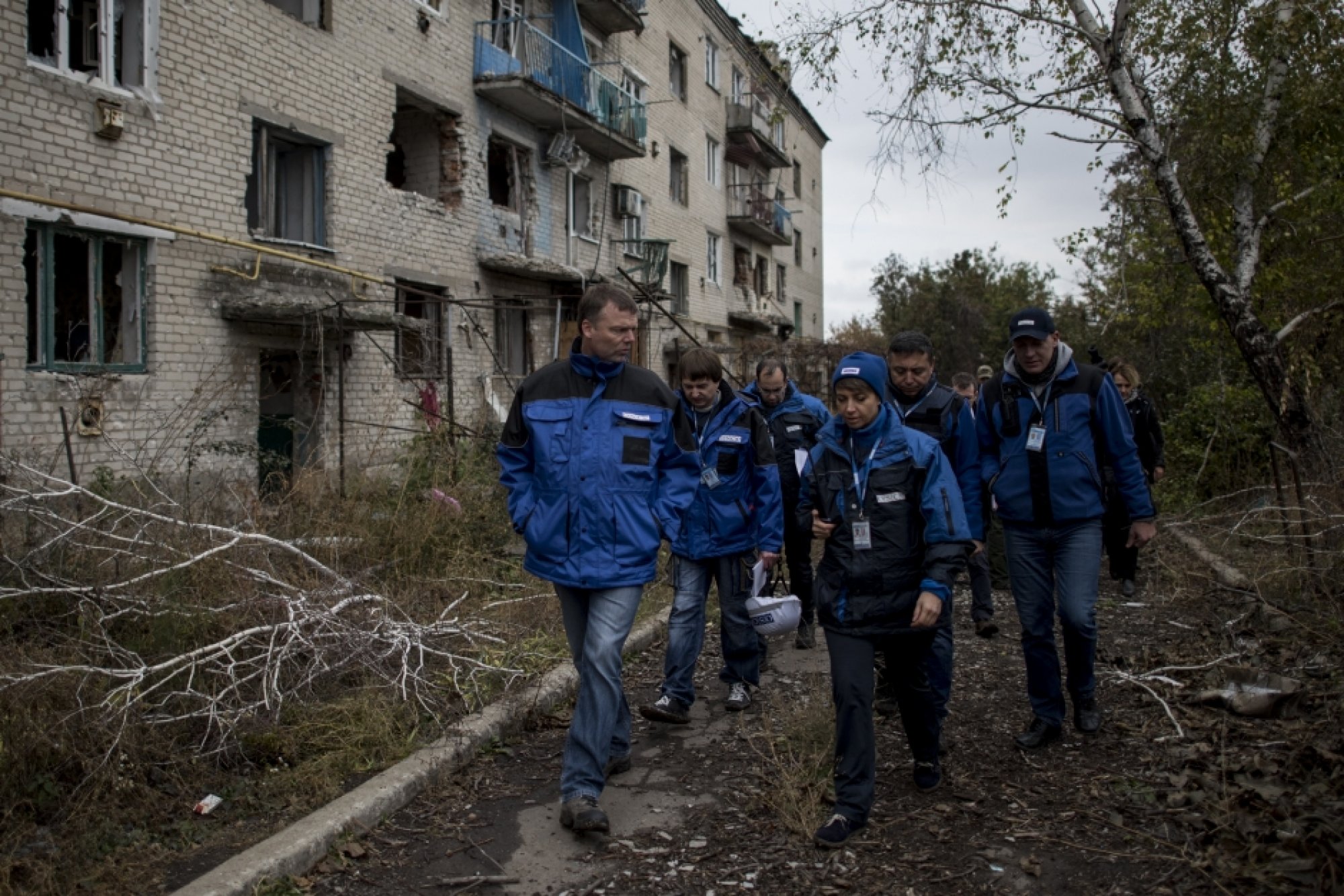 “Communication channels should be kept open at all times”

Stephanie Liechtenstein, Web Editor-in-Chief of the SHR Monitor, sat down with Alexander Hug, Principal Deputy Chief Monitor of the OSCE Special Monitoring Mission to Ukraine, to discuss the current security situation in eastern Ukraine, the impact of the Russian withdrawal from the Joint Center for Control and Coordination (JCCC) on the Mission’s work, as well as the proposal for a possible UN Peacekeeping Mission.

What is the current security situation on the ground?

The situation continues to be volatile and unpredictable. We have been registering high daily numbers of ceasefire violations. They vary from hundreds to over a thousand. Also, we have been reporting on the presence of heavy weapons – tanks, mortars, artillery systems including multiple launch rocket systems (MLRS), which must be withdrawn under the Minsk Agreements – in areas where they should not be on both sides of the contact line. In 2017, the OSCE Special Monitoring Mission (SMM) to Ukraine reported on such violations more than 4,000 times along with over 400,000 ceasefire violations.

Civilians continue to bear the burden of the conflict. They get killed and injured, their property gets damaged or destroyed, and their lives are disrupted. The Mission has corroborated 479 civilian casualties, including 86 fatalities in 2017. These are the cases which the Mission verified; there are still cases pending corroboration. Seventeen civilian casualties, including four fatalities, have already been confirmed this year.

To stop the suffering of the civilian population, the sides must find the will to implement their commitments which would stabilize the security situation: withdraw heavy weapons, disengage forces and hardware where the positions of the sides are too close to each other, remove mines, unexploded ordnance and other explosive devices. Instead, in 2017, the SMM saw that the armed forces and formations were building new trenches and sometimes moving their positions forward, placing heavy weapons in violation of withdrawal lines and laying new mines.

What impact does the Russian withdrawal from the Joint Center for Control and Coordination (JCCC) have on the work of the Special Monitoring Mission?

Russian Federation Armed Forces officers of the JCCC departed from Ukraine on 18 December 2017. The JCCC has played an important role in the implementation of the Minsk Agreements as its task is to assist in ensuring a comprehensive ceasefire and carrying out the overall coordination of de-mining work. The JCCC also has key functions regarding the safety and security of the SMM and should assist in ensuring rapid response to possible cases of impediments to monitoring and verification by the SMM.

Despite the disruption to the work of the JCCC, the responsibilities of the sides remain the same and SMM engages with the sides directly to ensure the continuation of its operations, including those operations that the JCCC has been involved in. For instance, the Mission continues its essential work on facilitating and monitoring the repairs to civilian infrastructure on both sides of the contact line. In the past two weeks, the SMM facilitated 34 ‘windows of silence’ to enable critical repairs to 12 infrastructure sites.

What is your view on the proposal for a UN Peacekeeping Mission to be deployed in eastern Ukraine?

A few facts first. For a Peacekeeping Force to be deployed there must be a peace to be kept. For this to happen, at least the basic military provisions contained in the Minsk Agreements would have to be implemented. Furthermore, one proposal refers to a protection force for the SMM to Ukraine.

On this issue, I would like to say the following. The biggest threat that the civilian monitors of the OSCE SMM are facing is that of mines and unexploded ordnance. The second biggest threat for the SMM is to be caught in cross-fire. In order to contain those two main threats, you would need mitigation measures other than a protection force. You would need mine action and a stop in violence against the SMM. The actors to deal with those threats are those on the ground. They know where the mine-affected areas are, and they have the ability to stop the fighting. In any case, it may be worth adding that any mission that deploys alongside the SMM will most likely face the same threats as the SMM does.

What are the main advantages of the OSCE SMM?

The OSCE SMM is the one international organization that has the largest footprint on the ground in eastern Ukraine. That enables it to provide the 57 OSCE participating States and the public with objective information on what is going on. We are aware that we may be reporting only about the tip of the iceberg as we are prevented from accessing certain areas, but we are still able to identify trends and main threats.

The SMM’s information is also being used to help deliver humanitarian assistance. We can identify areas where help is needed most and are making humanitarian organizations aware of this. With our dialogue mandate, we are then also able to facilitate the delivery of aid by helping to facilitate access to certain affected areas for humanitarian organizations. We closely cooperate with non-government organisations and other International Organisations, including with the agencies of the United Nations present in Ukraine.

The Mission also seeks to lessen the impact of the conflict on the civilian population by facilitating and monitoring ‘windows of silence’ – localized adherence to the ceasefire – that allow for essential repairs to civilian infrastructure, such as water and gas pipelines, wells and pumping stations, as well as electrical lines. In 2017, the SMM conducted 715 mirror patrols to facilitate repairs to key infrastructure sites, including the Horlivka-Toretsk water pipeline, estimated to provide potable water to approximately 70,000 people on both sides of the contact line, as well as a power line, estimated to supply electricity to 23,000 residents in Avdiivka.

In addition, the presence that we have in the area has an effect of deterrence, at least to a certain degree. We have seen that if the SMM is deployed in certain locations, the tensions are going down there.

We also support the international community, for example the Trilateral Contact Group and the Normandy Format, in their decision-making efforts. By using our reports as a basis, states can discuss possible solutions. Having the facts on the table is an important contribution for finding solutions on a multilateral level, for example within the UN or the OSCE.

Italy has taken over the Chairmanship of the OSCE on 1 January 2018. What should be on Italy’s priority list with regard to Ukraine?

The focus that the 2017 Austrian OSCE Chairmanship has placed on improving the humanitarian situation on the ground is something that should be continued. It should be made clear to all sides that the humanitarian prerogative should have absolute priority. It is not enough to just identify the humanitarian crisis. We now have to ensure that this becomes the main agenda item. I would argue that if the humanitarian questions are resolved, this would lead to a more conducive environment where other, more complex measures can be discussed and implemented. To achieve this, the underlying causes of the continued fighting need to be addressed immediately – in other words: comprehensive remedial action on root causes and not only symptom treatment, namely the withdrawal of heavy weapons, disengagement of positions and demining.