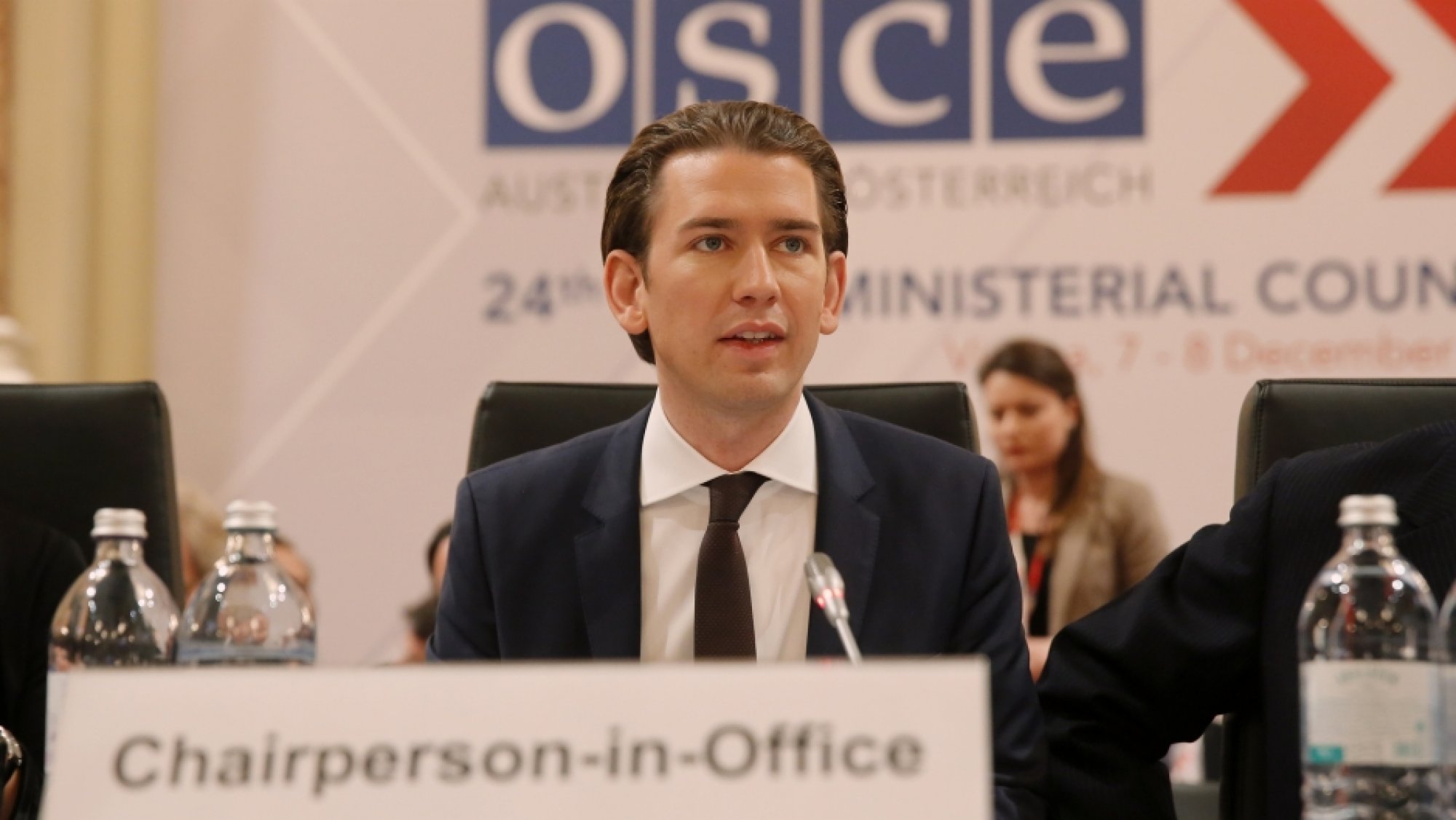 During his inaugural statement delivered at the OSCE Permanent Council in January 2017, OSCE Chairperson-in-Office (CiO), Austrian Foreign Minister Sebastian Kurz emphasised that “Austria traditionally sees its role as a bridge-builder and a place of dialogue. We seek transparency as an honest broker.”

Indeed, throughout the year, Austria had to prove, time and again, its ability to act as an honest broker and bridge-builder on several occasions.

The overall security situation in the OSCE area continued to be tense, with the Ukraine conflict remaining unresolved in its third year, and an increased amount of military activities carried out by both Russian and the West.

In this tense environment, Foreign Minister Kurz undertook several trips in his capacity as OSCE CiO. He travelled to Ukraine three times, as well as to Russia, Macedonia, Serbia, Georgia, and Moldova. He also addressed the UN Security Council in New York and held several meetings on the margins of the UN General Assembly.

When Austria assumed its OSCE Chairmanship in January 2017, it inherited a number of unresolved issues. Four top leadership positions, including the OSCE Secretary General, were vacant, the budget was not adopted on time, and several mission mandates needed to be prolonged.

Therefore, the first six months of the Austrian Chairmanship were dominated by intense efforts to resolve these organizational matters in order to ensure the continuous functioning of the Organization.

Extensive additional efforts to build consensus also paid off as Austria succeeded in prolonging the mandates of the OSCE field operations in Kyrgyzstan, Tajikistan and Uzbekistan.

Closure of OSCE Office in Yerevan

It was, however, not possible to prolong the mandate of the OSCE Office in Yerevan, Armenia, despite months of negotiations by the 2016 German OSCE Chairmanship as well as the Austrian Chairmanship.

Upon request from the Austrian OSCE Chairmanship, former Austrian President Heinz Fischer travelled to Armenia and Azerbaijan in April and met with President Ilham Aliyev in Baku as well as with President Serzh Sargsyan in Yerevan.

Yet, all attempts to find a consensus ended in failure and the office had to be closed on 31 August 2017. The main reason for the closure had to do with a disagreement about the office’s humanitarian demining-related activities.

Another success for the Austrian OSCE Chairmanship was the prolongation of the mandate of the OSCE Special Monitoring Mission (SMM) to Ukraine and the seven percent increase in the Mission’s budget. The budget increase provided the OSCE SMM with a good foundation to continue its important work on the ground in eastern Ukraine.

It is important to note that during the Austrian Chairmanship the first OSCE monitor died in the line of duty. US paramedic Joseph Stone died when his armoured vehicle hit a landmine on 23 April in the separatist-controlled village of Pryshyb in the Luhansk region. An Independent Forensic Investigation found that it is unlikely that the OSCE SMM was the intended target of the explosion.

Successful launch of the Structured Dialogue

Early in 2017, OSCE CiO Sebastian Kurz established the Structured Dialogue chaired by the German OSCE Ambassador Eberhard Pohl, to implemented the mandate approved in the Declaration on the Twentieth Anniversary of the OSCE Framework for Arms Control adopted at the 2016 Hamburg OSCE Ministerial Council. The Structured Dialogue is currently the only international forum for regular and inclusive dialogue on military security issues. This is especially important given the paralysis of the NATO-Russia Council.

While the process is still in its early stages some contours are taking shape. The new dialogue format helps to enhance military-to-military contacts, which are essential for building confidence and increasing transparency.

The OSCE Structured Dialogue also aims at developing a systematic analysis of trends in military force postures and exercises. This will help states better understand each other’s intentions, increase transparency and help to prevent military confrontation caused by misinterpretation and misperceptions.

Significant progress was also made with regard to the conflict between Moldova and its breakaway region of Transdniestria, a protracted conflict that remains unresolved since 1992.

On 27-28 November, a so-called 5+2 meeting was held in Vienna, which resulted in significant progress on a number of important socio-economic issues.

This progress was made possible by a ground-breaking decision taken on 3 November, when chief negotiators from Chisinau and Tiraspol agreed to reopen the Gura Bicului-Bychok bridge, which serves as a key transportation corridor between Moldova and Transdniestria.

Negotiators signed agreements on four additional important areas, including on the apostilization of Tiraspol University diplomas, the reconnection of the telecommunication space between Moldova and Transdniestria, the functioning of the Moldova-administered Latin Script Schools in Transdniestria, and the access to farmlands in the Dubasari region.

The topic of fighting radicalization and violent extremism was one of the top priorities of the Austrian OSCE Chairmanship. OSCE CiO Kurz appointed Professor Peter Neumann from King’s College London as his Special Representative on this topic. Professor Neumann completed a comprehensive report on the issue of countering radicalization in the OSCE area, which contains a number of practical recommendations.

It was, however, not possible to adopt a declaration on countering radicalisation and violent extremism at the Ministerial Council in Vienna. The Austrian Chairmanship undertook great efforts to forge consensus on this document that also included some of the recommendations of Professor Neumann’s report.

In order to make an impact, even without the declaration, Austria decided to provide the OSCE Secretariat’s Action Against Terrorism Unit with 250.000 Euros. A manual will be put together with the funds from the Austrian contribution that aims to provide OSCE participating States with expertise on how to counter radicalization in their countries.

The Austrian OSCE Chairmanship culminated in the OSCE Ministerial Council meeting, which took place in Vienna on 7 and 8 December. The meeting was attended by 40 Foreign Ministers, including US Secretary of State Rex Tillerson and Russian Foreign Minister Sergey Lavrov. It provided the space for numerous side-events and bilateral meetings.

Also, despite great difficulties during the negotiation process, Austria managed to broker consensus on six substantive ministerial decisions and declarations, among them on cyber security and on countering the illicit trafficking in small arms and light weapons.

There was significant domestic political upheaval in Austria in 2017. In May, Foreign Minister Kurz became the new party chief of the Austrian conservative people’s party, and in October early parliamentary elections took place in Austria.

As of early September, Foreign Minister Sebastian Kurz was involved in a time-consuming election campaign. This meant that he could spend less time on OSCE-related issues, such as travels or attendance at OSCE conferences.

In order to minimize impact of domestic politics on the work of future OSCE Chairmanships (there will also be elections during the Italian OSCE Chairmanship in 2018), participating States should rethink the role and mandate of the OSCE Secretary General (SG). Providing the SG with additional political functions could help reduce the pressure on the CiO.