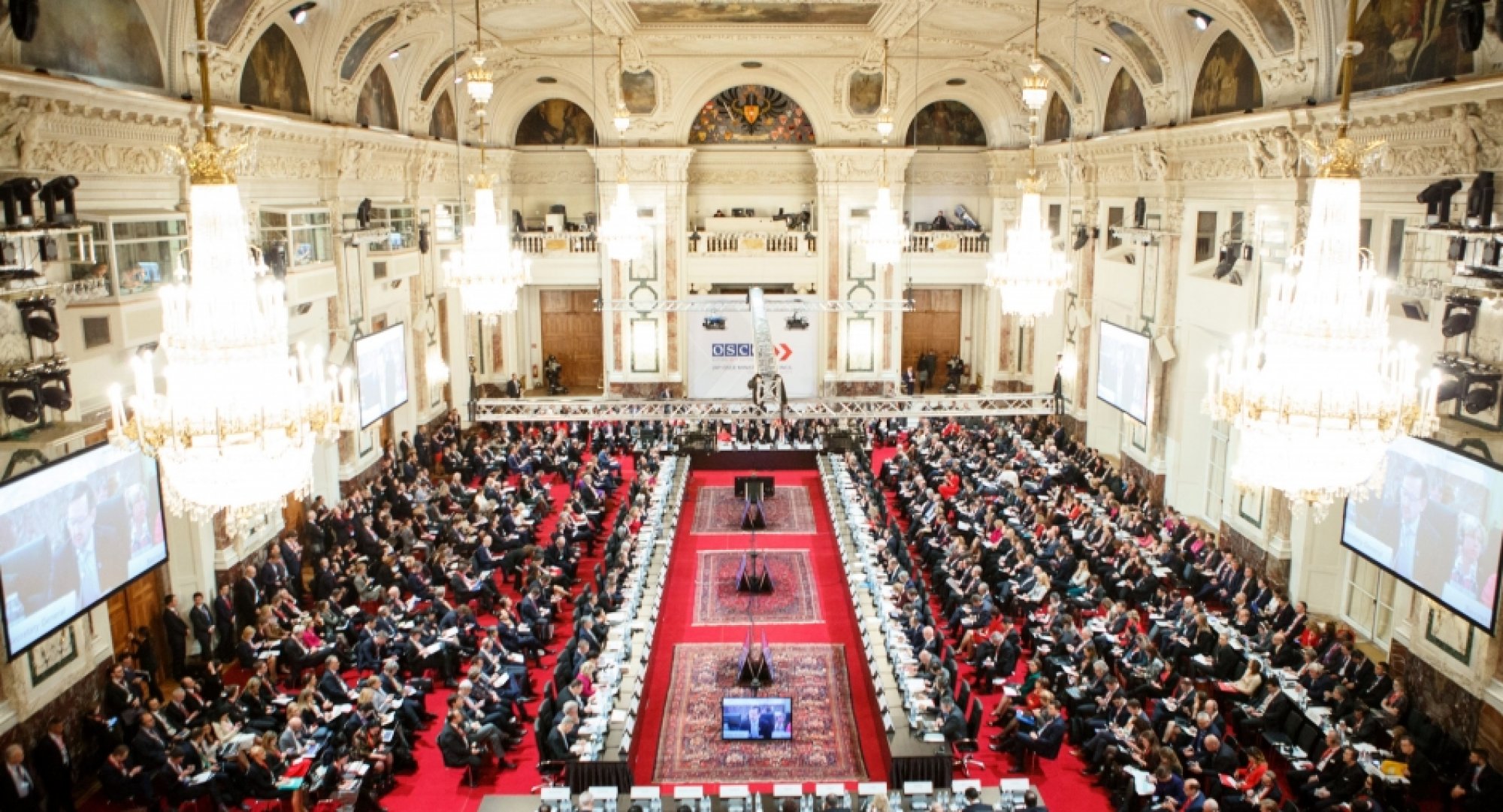 On 7 and 8 December, the 24th OSCE Ministerial Council (MC) meeting took place in in Vienna. The MC meeting, which is attended by foreign ministers or their representatives of the 57 OSCE participating States, provides an opportunity for high-level dialogue and gives overall guidance for the future work of the Organization. It is mandated to take decisions on any topic relevant to the work of the OSCE.

The MC meeting was preceded by a Parallel Civil Society Conference, organized by the Civic Solidarity Platform. Conference participants handed over human rights recommendations to the OSCE Chairperson-in-Office, Austrian Foreign Minister Sebastian Kurz on 6 December for consideration at the MC meeting.

The MC meeting was opened by OSCE Chairperson-in-Office (CiO), Austrian Foreign Minister Sebastian Kurz, who welcomed delegates to Vienna. He reminded everyone of the three special priorities that Austria had set itself for its Chairmanship, including improving the situation of the local population in conflicts, countering radicalization, and rebuilding trust among OSCE participating States.

The OSCE Secretary General Thomas Greminger emphasised that “security begins with trust—and trust begins with dialogue. This is the impulse that drove the Helsinki process. It is high time that we revive it today.”

He also referred to the importance of the Structured Dialogue as an example of “constructive engagement” in times of an “increasingly unpredictable security environment”. He hoped that the process would produce results, including “military risk reduction and confidence- and security-building measures”. “Further down the road, it should lead to renewed focus on conventional arms control,” Greminger added.

Greminger also placed emphasis on the financial situation of the OSCE and called on OSCE participating States to provide the Organization with the resources it needs to close the gap between what states expect the Organization to do and what it is currently able to do. In this context, he urged states to adopt a “sensible budget for 2018 by year-end”.

The MC meeting also saw the usual repetition of mutual accusations in the statements delivered during the plenary session. As in previous years, the meeting was characterized by entrenched positions and it illustrated the deep divide among participating States.

US Secretary of State Rex Tillerson announced that the United States “will never accept Russia’s occupation and attempted annexation of Crimea”. He also said that US sanctions that were imposed after Moscow’s illegal annexation of Crimea “will remain in place until Russia returns full control of the peninsula to Ukraine”. “In eastern Ukraine, we join our European partners in maintaining sanctions until Russia withdraws its forces and meets its Minsk commitments,” Tillerson added.

Russian Foreign Minister Sergey Lavrov complained about “building up NATO’s potential on the eastern flank, the policies seeking to recklessly expand the alliance, and deploying US missile defence in Europe”. He also lamented that “in France journalists of the Sputnik news agency are not allowed to attend news conferences” and that “US authorities are imposing considerable restrictions on the activities of the Russia Today television channel by designating it a foreign agent”. Lavrov also told the OSCE meeting that “so far the efforts within the Contact Group and the Normandy format have been artificially hindered by Kiev”.

Ukrainian Foreign Minister Pavlo Klimkin accused Russia of “aggression in Donbas”, adding that this has led to the killing of “over ten thousand people”. “This cannot be a new normality for Europe,” he stressed. Referring to the Minsk Agreements, he said that “there is no sign that Russia ever intended to abide by its commitment”.

Turkish Vice-Foreign Minister Achmet Yildiz complained in his speech during the plenary session that affiliates of the terror network that perpetrated the coup in Turkey last year “were allowed a presence in these rooms as recently as this month”. He called on the OSCE to develop clear modalities for attendance at OSCE human dimension meetings. In this context, the Austrian OSCE Chairmanship recently initiated a reflection group to look for solutions.

The OSCE MC meeting also offered an opportunity to discuss a possible UN Peacekeeping Mission for eastern Ukraine. Russia and Ukraine both seem to be in favour of such a UN Mission, however their respective proposals differ greatly.

Russia’s initial proposal suggested the deployment of a UN Peacekeeping Mission along the line of contact in eastern Ukraine for a duration of six months. President Putin emphasised that the UN mission should mainly provide security to OSCE civilian monitors. The Russian proposal was officially submitted to the UN Security Council.

Ukraine has mentioned on several occasions in the past few months that it was in favour of a full-fledged Chapter VII UN Peacekeeping Mission. Kiev, however, has yet to submit its proposal to the UN Security Council.

Most international experts are of the opinion that in order for such a UN Peacekeeping Mission to be viable it would have to be deployed throughout the entire area of Donbas, not just along the line of contact, as well as along the Russian-Ukrainian border. Second, its main aim should be to advance the implementation of the Minsk Agreements. One of the key principles of the UN Peacekeeping Mission should be a clear link to the political solution, as outlined by the Minsk Agreements.

The meeting on the margins of the MC offered an opportunity to discuss these various viewpoints. The meeting was also aimed at discussing UN-OSCE cooperation and an eventual division of tasks.

As in previous years, the Vienna MC did not adopt a political declaration. Last time such a declaration was adopted was at the OSCE Summit in Astana in 2010. This is due to the fact that participating States have fundamentally divergent views on the protracted conflicts in the OSCE region as well as on the Ukraine conflict.

Participating States were also not able to adopt a decision on the country holding the OSCE Chairmanship in 2020 because Norway withdrew its candidacy at the last moment.

The OSCE MC also failed to adopt decisions in the human dimension, a negative trend that has been going on for several years. During the closing session, many participating States held mainly Russia accountable for the lack of progress in this area.

It was not possible to adopt a declaration on preventing and countering terrorism and violent extremism and radicalization that lead to terrorism (VERLT). The topic had been a top priority for the Austrian Chairmanship throughout the year. The draft declaration was a substantive document in which participating States acknowledged that the OSCE is well-suited to provide a platform for the exchange of good practices and lessons learned on preventing and countering terrorism and VERLT. The draft declaration also emphasised that the role of the OSCE could be strengthened further in this field.

The decision reaffirms previous decisions taken by the Permanent Council on this topic in 2013 and 2016. They are significant because they provide States with the necessary tools to deescalate the situation in the event of a cyber-attack and brings more certainty into an environment that is dominated by uncertainty. The OSCE is to date the only regional security organization that has succeeded in adopting such a comprehensive set of confidence-building measures for the cyber domain.

Participating States also adopted a decision No. 10/17 on “Small Arms and Light Weapons and Stockpiles of Conventional Ammunition”. The decision reinforces the commitments of participating States in combatting illicit trafficking in small arms and light weapons (SALW), which fuels organized crime, terrorism, violence and armed conflict. A new aspect in the decision is the inclusion of the threat posed by the illicit conversion, transformation and reactivation of SALW.

The Vienna MC also adopted a decision No. 6/17 on “Strengthening Efforts to Prevent Trafficking in Human Beings” as well as a decision No. No. 7/17 on “Strengthening Efforts to Combat all Forms of Child Trafficking, Including for Sexual Exploitation, as well as other Forms of Sexual Exploitation of Children”. Both decisions build on previous commitments in this area, especially those contained in the 2003 OSCE Action Plan to Combat Trafficking in Human Beings and its Addenda.

Furthermore, OSCE participating States adopted decision No. 8/17 on “Promoting Economic Participation in the OSCE Area”. The decision recognizes that economic participation, social inclusion and sustainable growth are interdependent and contribute to prosperity and security that can help prevent terrorism. In this context, the decision calls upon OSCE participating States to continue efforts in promoting economic participation, especially among the youth and women, and encourages them to make use of the OSCE to foster the exchange of best practices in this area.

Given the significant progress that was made regarding Transdniestria this year, participating states also adopted a “Ministerial Statement on the Negotiations on the Transdniestrian Settlement Proces in the 5+2 Format”. In the statement, participating States commend Moldova and Transdniestria for reaching an agreement on five substantive issues, including on apostilization of educational documents issued in Transdniestria, interaction in the field of telecommunications, functioning of the Latin Script Schools, use of farmlands in Dubasari region, as well as the opening of the bridge across the Dniester river between villages Gura Bicului and Bychok. The statement also calls upon Transdniestria and Moldova to continue to engage, under the Italian Chairmanship, in the negotiation process.

OSCE as a forum for dialogue in challenging times

In conclusion, the Vienna MC showed that- despite vast differences – all participating States recognise the important role of the OSCE as a forum for dialogue, especially during difficult times. All participating States agree that the OSCE is the right place for addressing the Ukraine conflict and to find solutions to other pressing issues of common concern. The high-level attendance was proof of this, as were the six adopted decisions and declarations. The Austrian Chairmanship succeeded in facilitating these discussions and assisted in brokering the six decisions.