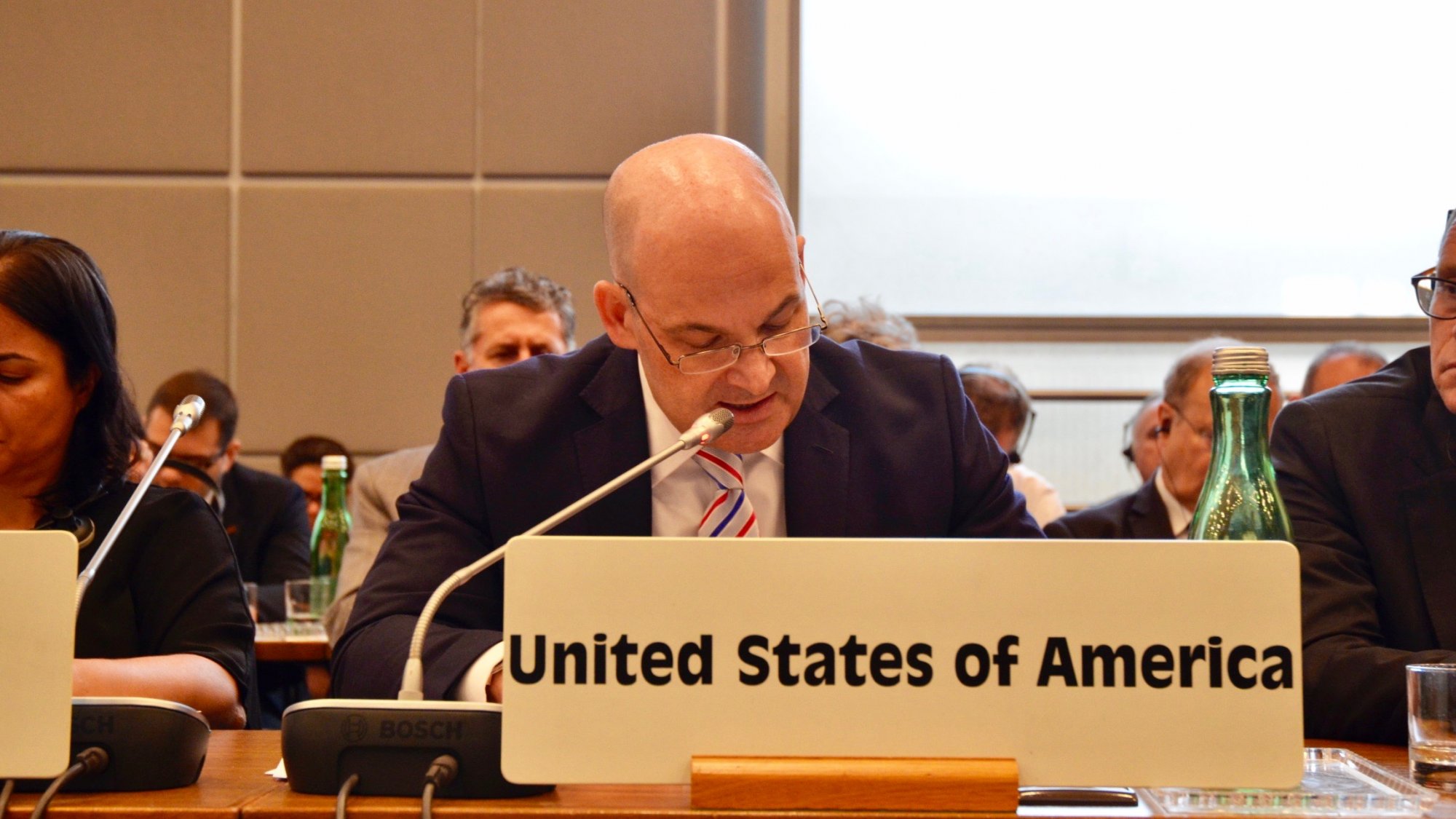 “Russia should honour its commitments”

On the margins of the Annual Security Review Conference, the SHR Monitor spoke to Christopher Robinson, Deputy Assistant Secretary in the Bureau of European and Eurasian Affairs at the U.S. State Department.

In this interview, Mr. Robinson speaks about the current risks of unintended escalation and accidental war between Russia and the West, and the need for Russia to implement key OSCE documents and to honour its commitments. He also explains the U.S. government’s position on the OSCE Structured Dialogue and highlights where he sees the main added value of the OSCE.

Russia was suspended from the Council of Europe in 2014 due to the illegal annexation of the Crimean Peninsula and readmitted recently. In the OSCE, by contrast, Russia always remained a full participating State, it has an equal seat at the table, and is prominently represented at many conferences, for example at this year’s Annual Security Review Conference (ASRC). Many diplomats and experts say that this is one of the added values of the OSCE. Do you agree?

One of the biggest values of the OSCE is the fact that all of the commitments that we have undertaken since the 1975 Helsinki Final Act have been agreed by all of us collectively. They have not been imposed by one side on the other. We have all freely undertaken and acknowledged these commitments by consensus.

Frankly, given where we are today, I believe that we would struggle to come up with a similar set of commitments. I am not sure that today Russia would commit again to the 1975 Helsinki Final Act because Russia does not honour its commitments under this document.

Where else does the United States (U.S.) government see the main added value of the OSCE?

When the Balkans went through a very difficult transition period in the 1990s, the OSCE definitely demonstrated its value repeatedly over time. It helped to build democratic institutions, assisted in the democratisation process, and supported rule of law and human rights. Look were these countries are today.

Furthermore, the Ukraine crisis and the attempted annexation of the Crimean Peninsula showed us why we need the OSCE. The role that the OSCE Special Monitoring Mission (SMM) plays on the ground is essential and no other institution could take on this specific task.

And finally, I think all of the commitments that we have jointly undertaken, from human rights to government accountability and transparency, actually enhance our own national security as well as the security of our European partners.

Many people that I speak to tell me that during the Cold War – although tensions were extremely high – there were more channels of communication between Russia and the West than there are today. A lot of experts say that this lack of communication could become very dangerous as it could lead to unintended escalation and accidental war. Do you agree with this assessment?

I actually don’t agree. Things have profoundly changed since the end of the Cold War. Today, we have much deeper people-to-people contacts between the West and Russia. Contacts are much deeper when it comes to civil society, academia and journalists. We actually want more of these contacts, but it is Russia that has isolated itself from these contacts.

Furthermore, from the U.S. government side, we also have a range of contacts with Russia on various levels.

Our position is the following: There is no return to business as usual with Russia without Moscow addressing the Ukraine conflict. Moscow also needs to return Crimea to Ukraine. Furthermore, Russia needs to end its interference in the internal affairs and democratic processes in the West. Only then will we be ready to elevate our military contacts again.

U.S. President Donald Trump was very clear when he said: It would be better for the world, and as such for the OSCE space, if the U.S. and Russia had a better relationship. It is up to Russia to take some concrete steps here and to stick to its commitments under the Helsinki Final Act and other important documents. Right now, Russia is not meeting its commitments.

Could this be a vicious circle and maybe lead to a dangerous escalation at some point?

It is not like we are not talking. U.S. Secretary of State Mike Pompeo was in Sochi in May to meet with his counterpart Russian Foreign Minister Sergey Lavrov as well as with Russian President Vladimir Putin. Our President also held talks with President Putin on the margins of the G20 Summit in Japan. Under Secretary of State for Arms Control and International Security Andrea Thompson also met with her Russian counterpart. In addition, we have a range of envoys for conflicts around the world that conduct a dialogue with Russia. Finally, I met with my Russian counterpart on the margins of the OSCE ASRC here in Vienna. This shows that we are talking to each other.

We have been very clear with Moscow what our concerns and expectations are. There is no miscommunication here. Russia conducting dangerous manoeuvres against our planes has nothing to do with miscommunication. It is simply an act of Russian aggression.

But don’t you think that a lack of communication could then in precisely such a case lead to a situation that could spiral out of control?

It is true that a lack of military transparency could lead to a dangerous incident. But if Russia did abide by its existing commitments, then we could address some of the transparency issues and reduce the risks associated.

The 2011 Vienna Document is a great example here. We don’t actually need new agreements. We just have to implement and honour what we already have agreed to. In this way, we can reduce tensions, build confidence and reduce the risks of conflict.

Do you feel that the OSCE Structured Dialogue could add any value in this discussion?

The OSCE can make a very strong contribution through the Structured Dialogue in addressing the so-called transnational threats, including terrorism and transnational organised crime. In addition, since 2014 but also before that, we have been facing so-called hybrid threats. The OSCE is very well positioned to address them because these types of threats cut across the three OSCE security dimensions.

Apart from that, the Structured Dialogue can be a platform to discuss the traditional hard security threats.

Do you have specific views on the incident prevention mechanism that is being discussed in the framework of the Structured Dialogue?

I don’t have any specific comments on that. I can only tell you that the U.S. and Russia have a bilateral agreement on incident prevention and it does not stop Russia from violating it and engaging in dangerous activity in the air and at sea. We address the incidents through this bilateral agreement. There were several recent dangerous incidents at sea and in the air. For example, on June 6 a Russian aircraft intercepted a U.S. aircraft flying in international airspace over the Mediterranean Sea.

So, the problem is not an absence of dialogue but rather aggressive actions by Moscow. Honouring existing commitments would therefore be the first step so that we can rebuild a better bilateral relationship.

Russia argues that it feels that its own security interests have not been fully taken into consideration since the end of the Cold War, for example because of NATO enlargement. How do you feel about this argument?

Russia also has to recognise that countries in its neighbourhood, such as Ukraine, Georgia and Moldova, have the right to choose their own future. We have all agreed to those principles. This does not have to be a threat to Moscow. Waging war in those countries only increases tensions and actually undermines Russia’s long-term interests.

If Moscow wants security, economic development and prosperity for its people, fostering aggression in its neighbourhood does not help. It only isolates Russia from the global community.

Do you not understand parts of the Russian argument that their security could also be at stake?

We listen to that argument and we will continue to discuss it. We just fundamentally disagree with something here: We believe that Russia’s neighbours have a right to choose their own future.

Do you see any silver lining?

The current situation is very tough. Government-to-government relations are not good, but we do have a dialogue. But honestly, dialogue has to lead to concrete outcomes at some point.

Otherwise, I think the U.S. and Russia have similar positions on the new government in Moldova. This is a positive sign and shows that we can cooperate on certain issues. Also, interests on Afghanistan and on North Korea are not that far apart, and even overlap.

Finally, I am interested in your opinion about the opening statement at the ASRC of former Austrian President Heinz Fischer. Without mentioning the U.S. directly, he regretted that in recent years, multilateralism had come under pressure and referred in this context to the dissolution of the 2015 Iran Nuclear Deal and an increasing attitude of “my country first”.

We are very committed in the OSCE and we strongly support the OSCE. For example, we launched the so-called Moscow Mechanism together with other states here at the OSCE. We are represented by a huge delegation at the ASRC and we have a new OSCE Ambassador coming in soon. What we want is effective multilateralism which means that we want it to produce results. It has to move somewhere, narrow differences, and come up with practical solutions.