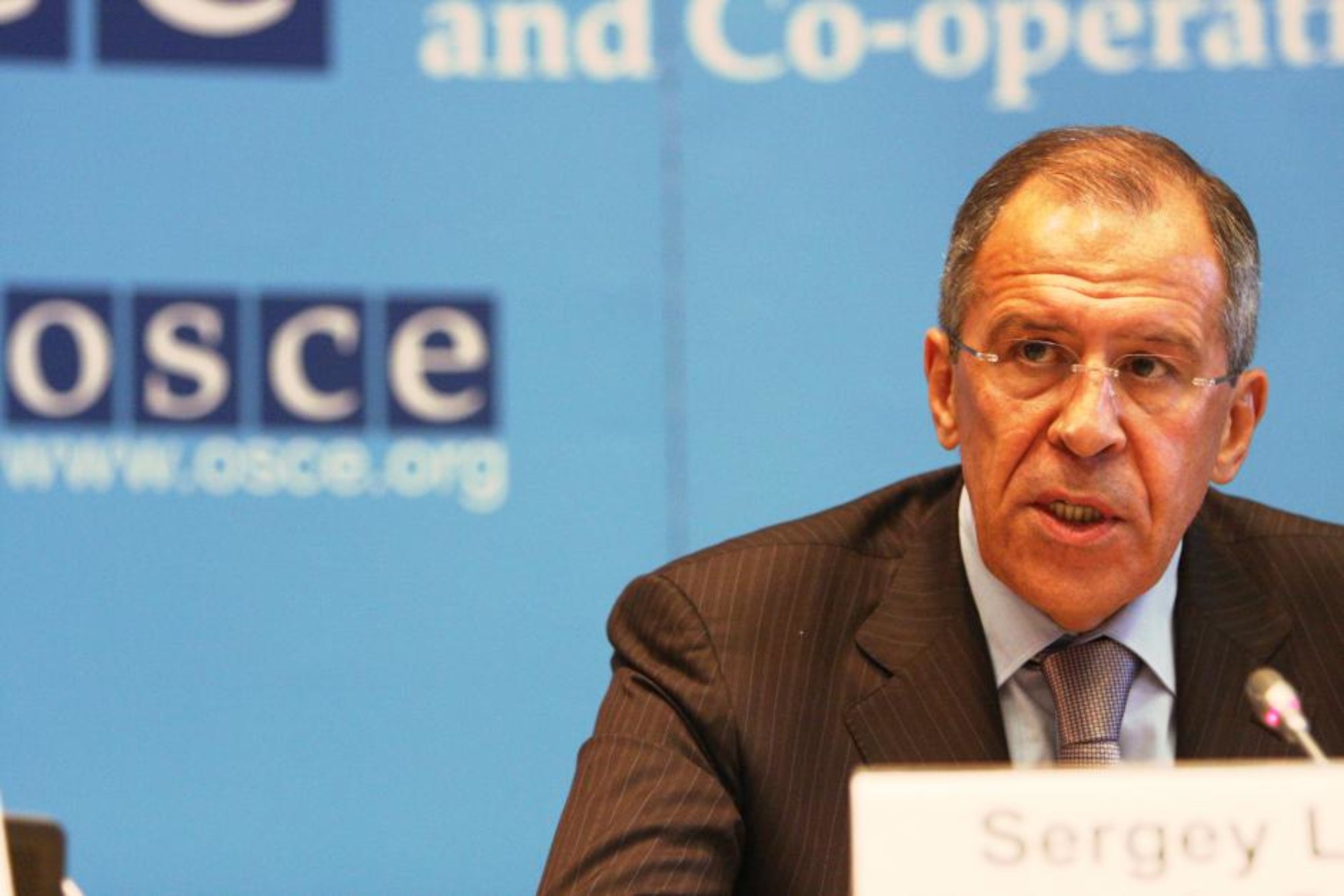 The Polish OSCE Chairmanship has decided to ban Russian Foreign Minister Sergey Lavrov from entering Poland to attend the upcoming OSCE Ministerial Council meeting that will be held in Łódź, Poland, on December 1 and 2.

Poland has notified Russia about this decision in a diplomatic note last week, according to the Polish Foreign Ministry.

“Following Russia’s illegal aggression against Ukraine on February 24th a number of Russian nationals were added to the list of sanctioned individuals, including Minister Lavrov,” the statement continued.“We expect the Russian side to select members of the delegation of the Russian Federation according to the current regulations.”

A closer look at EU sanctions against Russia since 2014 makes clear that the EU’s restrictive measures have been devised with the hope of keeping diplomatic channels open.

The EU has not imposed a travel ban on Russian Foreign Minister Lavrov, although his assets have been frozen. EU Council Decision CFSP 2022/331, amending Council Decision 2014/145/CFSP, is very clear in this regard. It states that Mr. Lavrov is exempt from the travel ban, as is Russian President Vladimir Putin.

Individuals who are subject to an EU travel ban can also benefit from a number of exceptions, according to Council Decision CFSP 2014/145. For example, EU member states hosting international organizations or international conferences may grant exemptions.

In addition, EU Council Decision CFSP 2014/145 allows member states to grant an exemption to the travel ban if they hold the OSCE Chairmanship.

Article 1, paragraph 6, states that member states may grant exemptions, “where travel is justified on the grounds of … attending intergovernmental meetings, or those promoted or hosted by the Union, or hosted by a Member State holding the Chairmanship in office of the OSCE, where a political dialogue is conducted that directly promotes the policy objectives of the restrictive measures, including support for the territorial integrity, sovereignty and independence of Ukraine.”

All of these measures clearly indicate the EU’s deliberate attempts to keep the possibility of talks with Russia open despite the war.

Poland also hosts the OSCE Office for Democratic Institutions and Human Rights (ODIHR) and for that purpose has signed a host country agreement with the OSCE. Article 8 of that agreement states that representatives of OSCE states who take part in OSCE meetings in Poland shall be exempt from travel and immigration restrictions.

But the national decision by Warsaw not to issue a visa to Mr. Lavrov does not come as a big surprise, given the fact that Poland has been disproportionately affected by the Russian war against Ukraine. According to the United Nations, 1.4 million refugees from Ukraine have registered for temporary protection in Poland since the start of the Russian aggression against Ukraine, by far the highest number among EU countries.

Given its border with Ukraine, Poland is also exposed to spillover from the conflict. On November 15, two Poles were killed in the Polish village of Przewodów by what NATO believes to be a missile fired by Ukrainian forces to defend against a brutal barrage of Russian air strikes.

Many OSCE diplomats also argue that Russia has violated the very foundations of the OSCE in an unprecedented manner, including the principles enshrined in the Helsinki Final Act. Those principles have guided the relations among the 57 OSCE participating States since 1975.

They include: respect for territorial integrity of states, peaceful settlement of disputes, inviolability of frontiers, refraining from the threat or use of force, non-intervention in internal affairs, and self-determination of peoples, among others.

The ongoing full-scale war by Russia against Ukraine has resulted in tens of thousands of deaths and the destruction of civilian infrastructure in Ukraine, leading to blackouts across the country. Two OSCE expert reports have also identified potential war crimes committed by Russian forces in Ukraine.

In addition, as a result of Russia’s brutal war against Ukraine, the very concept of cooperative security on which the OSCE is based has all but collapsed, making normal negotiations and dialogue virtually impossible, OSCE diplomats say.

Under normal circumstances, the OSCE Ministerial Council is a high-level gathering of the foreign ministers of the 57 OSCE participating states, aimed at adopting a number of important decisions that guide the future work of the OSCE. It is also an opportunity for dialogue among foreign ministers on the margins of the conference. This usually also includes a bilateral meeting between the U.S. and Russia.

But given the unprecedented circumstances, this year the Polish Chairmanship has not tabled any substantive draft decisions for negotiations. There is only one text that ministers are hoping to adopt at their meeting in Łódź: a decision on the date and place of the next OSCE Ministerial Council meeting, to be held in North Macedonia next December.

The OSCE Ministerial Council meeting in Łódź will be chaired by Polish Foreign Minister Zbigniew Rau.

During the weekly gathering of OSCE Ambassadors in Vienna on November 24, he said that Ukraine was “grateful” to the Polish Chair “for guarding OSCE principles and commitments in times of existential challenges.” He said that the Polish decision contributes to the OSCE’s “credibility in the eyes of those who suffer from Russian attacks.”

“As Russia violates all ten principles of the Helsinki Final Act, continues to ruin security and cooperation in Europe as well as abuses OSCE platform to disseminate propaganda and disinformation – we have to strengthen Moscow’s isolation,” Tsymbaliuk said.

Russia predictably blasted Poland for its move to exclude Lavrov from the Ministerial Council meeting.

“The decision by Poland, as the current chair in the Organisation for Security and Co-operation in Europe (OSCE), to bar Foreign Minister of the Russian Federation Sergey Lavrov from the OSCE Minister Council due to take place in Łódź on December 1-2, 2022, is an unprecedented and inflammatory step. It is incompatible with the status of the chair in the organisation where 57 countries take part as sovereign and independent states under the conditions of full equality,” the Russian Foreign Ministry said in a statement on Saturday, adding that Russia’s Ambassador to the OSCE Alexander Lukashevich will head the Russian delegation at the OSCE Ministerial Council meeting in Poland instead.

In the statement, the Russian Foreign Ministry also accused Poland of having “persistently destroyed” the foundations of the OSCE and of having done “everything in its power to erode the culture of consensus fundamental for the Organisation.”

“With these destructive actions, Poland, with the support of its associates from the Western camp, is pushing the OSCE into the abyss and depriving it of the last chance to demonstrate its relevance in enhancing security and promoting cooperation, the objectives for which it was established,” the Russian Foreign Ministry said.

Yet, prior to the Russian invasion of Ukraine on February 24, Poland, in its capacity as OSCE Chair, worked tirelessly to establish a security dialogue within the context of the OSCE. The Polish initiative, launched just about two weeks prior to the Russian invasion of Ukraine, was intended to ease growing tensions by providing a multilateral forum for Ukraine, European states, Russia and the U.S. to engage in open dialogue amid the massing of Russian troops along Ukraine’s border.

But it was Russia that refused to take up the offer proposed by Poland, calling it “ill-conceived.”