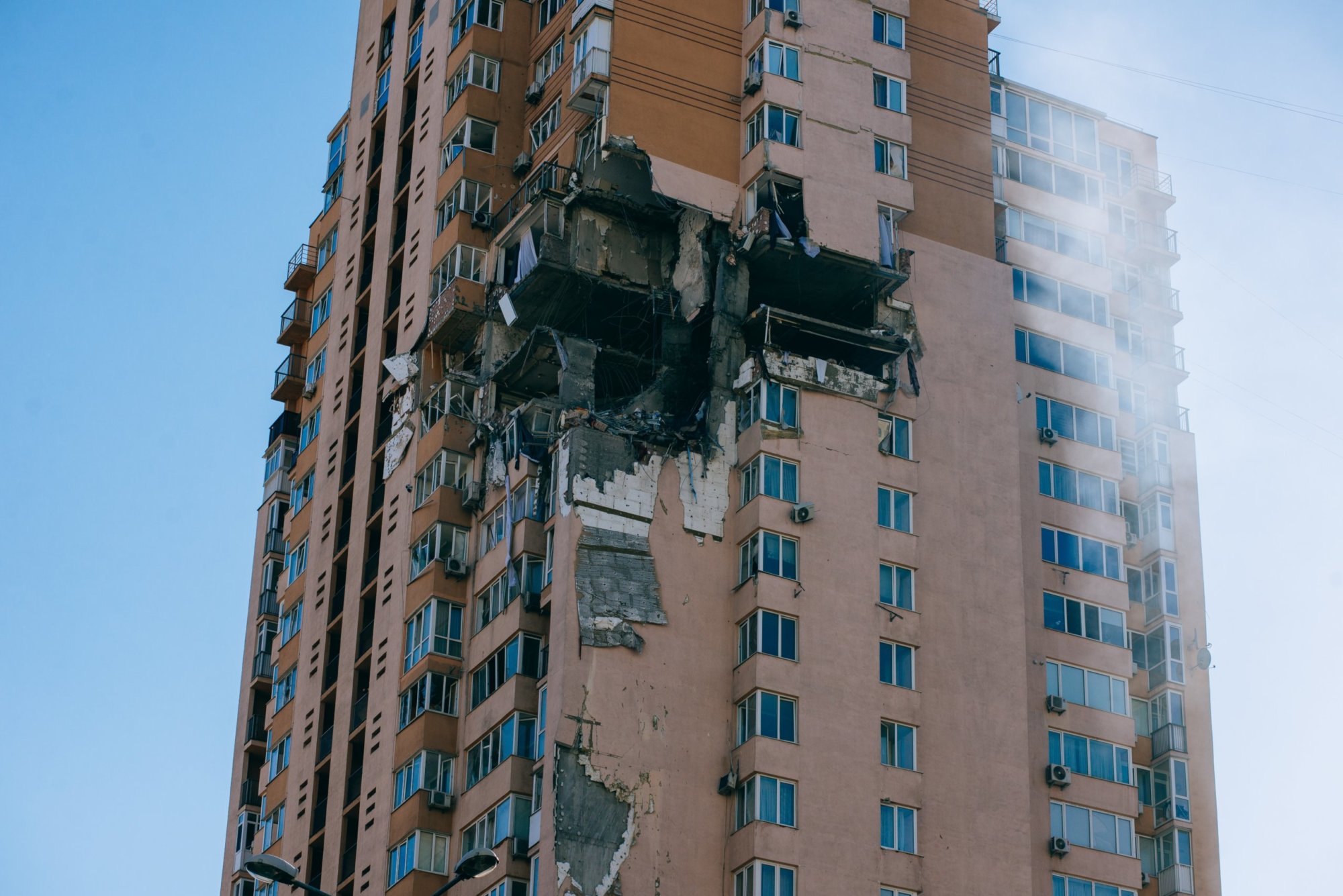 The report also concludes that international human rights law has been “extensively violated” in the war against Ukraine. Those violations are “largely attributable to the Russian Federation” and have occurred mostly “in the territories under the effective control of the Russian Federation, including the territories of the so-called Donetsk and Luhansk People’s Republics.”

The 115-page report will be made public tomorrow, on July 14, and will be discussed among OSCE diplomats in Vienna at their weekly Permanent Council meeting.

Given the evidence collected by experts, the report concludes that there are “reasonable grounds to believe that war crimes and crimes against humanity have been committed in the current conflict in Ukraine, mostly, albeit not exclusively, by members of the armed forces of the Russian Federation.”

This is in line with the findings of the first OSCE expert report, which was published on April 13 and covered the period from February 24—the first day of the Russian invasion—and April 1.

The current OSCE expert report says that the invasion of Ukraine has resulted in “unnecessary and disproportionate harm to civilians due to the Russian military carrying out […] deliberate attacks against civilian targets.” The report also says that Russian forces have deployed cluster munitions and other weapons that have caused severe harm to civilians and have led to the destruction of civilian infrastructure, including houses, hospitals, schools and churches.

These are all considered violations of international humanitarian law, including the four Geneva Conventions as well as the Hague Conventions.

The report states that in light of the high numbers of civilian deaths and the documented destruction of civilian infrastructure, “it is highly unlikely that the military advantage sought [by Russia] was significant enough to justify the negative impact on civilians.”

“This constitutes a violation of the proportionality principle. Furthermore, the anticipated losses are clearly excessive, which may constitute a war crime,” the report concludes.

The experts also say that Russia refused to answer what kind of “military advantages” its forces were seeking.

“The events concerning the towns of Bucha and Irpin, that were visited by the mission, are two emblematic examples of the breaches of International Humanitarian Law under the Geneva Conventions and their Additional Protocols, which constitute war crimes,” the report states.

The report also includes a graphic description of torture chambers found in Bucha and other villages.

“At the front, there was a room that appeared to be used for executions, with bullet holes in the walls,” the report states. “The following room contained two chairs, an empty jug, and a wooden plank. The Russians had brought in two metal bedsprings and leaned them against the wall in another. The tableaus suggested to Ukrainian investigators that prisoners were tortured here: tied to the bedsprings and interrogated; strapped to the plank and waterboarded. In that chamber, five dead men dressed in civilian clothes were discovered. They were covered with burns, bruises, and lacerations.”

In Zabuchchya, another village in the Bucha district, the report says that “18 mutilated bodies of murdered men, women, and children were discovered in a basement: some had their ears cut off, while others had their teeth pulled out.”

Filtration camps and ‘large scale deportations’ of Ukrainians to Russia

The report additionally confirms the findings of the prior expert report which stated that human rights had been “extensively violated” in Ukraine. International human rights law establishes the obligation of states to respect, protect and recognize the human rights of citizens. This also applies during times of war.

The current report says that “some of the most serious violations encompass targeted killing of civilians; […] unlawful detentions, abductions and enforced disappearances; […] large scale deportations of Ukrainian civilians to Russia; various forms of mistreatment, including torture; […] and the imposition of the death penalty.”

The experts conclude that “any single violent act of this type, committed as part of such an attack and with the knowledge of it, constitutes a crime against humanity.” It furthermore notes that such patterns have become “more evident in the period under scrutiny in this report” when compared to the first report issued on April 13.

The report contains harrowing accounts of sexual violence against women and even children. It describes the case of 23-year old Karina Yershova from Bucha. She was “abducted, raped, tortured and finally shot dead.” The report also states that there were “instances of gang rape or rape carried out in front of family members, including children.”

In addition, the experts say that they have identified “two alarming phenomena which were not included or paid sufficient attention in the first report.”

This first is related to the establishment of so-called filtration camps by Russian armed forces where Ukrainians are being held, questioned and searched. The report says that, according to witness testimonies, people are being subjected to “harsh interrogation and humiliating body inspection” in those centers, including in Bezimenne in the Donetsk region. Individuals who pass through these filtration centers are often transferred to Russia “with their consent or without it.”

“Those who do not pass through it, tend to be transferred to the territories of the two so-called People’s Republics and their whereabouts are mostly not known,” the report continues. This handing over of people or detainees to authorities in the so-called People’s Republics often means that they will be subjected to “problematic practices” by separatist authorities, who have also imposed the death penalty.

The report also highlighted violations of international humanitarian law by Ukrainian armed forces, including their treatment of Russian prisoners of war and of the bodies of dead Russian soldiers.

The report also discussed the Ukrainian government practice of detaining Ukrainian citizens who are considered to “sympathize with Russia.” They “can be detained for up to 30 days without a court order, and antiterrorism legislation under martial law allows authorities to withhold information about their clients’ remand.” The authors of the report state that they discussed this issue with Ukrainian authorities during their visit to Ukraine and were “assured” of “full respect for human rights.”

The report also highlights three trials that have been held in Ukraine in which Russian soldiers were accused of crimes under international law. The report states that the trials have “in the majority, produced positive reactions” but that “the respect of the fair trial guarantees during the trials gives rise to doubts.”

Westerns sources told SHR Monitor that “the potential for isolated Ukrainian violations is discussed and has been discussed with senior Ukrainian officials, who have provided assurances that periodic and continuous training with regard to international humanitarian law is undertaken by Ukrainian service people.” Western sources also say that Ukraine has provided “assurances” that any potential violations will be investigated and the perpetrators will be brought to justice.

“The report is a real-life horror story,” Ambassador Neil Bush, the UK Permanent Representative to the OSCE, told reporters in a background briefing on Thursday. “Due to the actions of the Russian government – a government of an OSCE participating State – this horror is an everyday reality for people across Ukraine,” he said.

In a statement at the OSCE Permanent Council on Thursday, US Ambassador Michael Carpenter said that the report “gives us an opportunity to pull back and document the unconscionable atrocity crimes, human rights violations, and abuses members of Russia’s forces have committed since Russia launched its brutal full-scale invasion in February of this year in an attempt to seize additional territory from Ukraine.”

Carpenter said that the documented atrocities are “an affront to this entire organization and every single principle it represents,” adding that “the paid apologists of the regime that commits these horrors would have us believe that the people of Ukraine are doing this to themselves.”

“But we have facts, and not just facts but evidence, on our side.”

This second expert report builds on information gathered in the first OSCE expert report from April. It also relies on data provided by international organizations, NGOs and the media. The OSCE expert mission also reopened a secure online communication channel through which informants were able to submit evidence.

While members of the first expert mission were unable to travel to Ukraine due to the volatility of the situation on the ground in the first few weeks of the war, two members of the second expert mission did visit Ukraine on June 20-23. These members held meetings with Ukrainian government representatives and visited the towns of Irpin, Bucha and Hostomel. They also met with witnesses who are not named in the report due to security concerns.

The mission did not have a mandate to conduct criminal investigations or seek detailed evidence about individual responsibilities for war crimes or crimes against humanity. But the patterns identified in the report will serve as a basis for further investigation and prosecution by national and international courts, such as the UN International Court of Justice (ICJ), the International Criminal Court (ICC), and the European Court of Human Rights (ECHR). These national and international judicial bodies will eventually be in a position to establish individual and state responsibilities.

On June 2, 45 OSCE participating States, with the support of Ukraine, triggered the so-called OSCE Moscow Mechanism and established a mission of experts to “consider, follow up and build upon the findings of the Moscow Mechanism report received by OSCE participating States on 12 April 2022” addressing “the human rights and humanitarian impacts of the Russian Federation’s invasion and acts of war, supported by Belarus, on the people of Ukraine, within Ukraine’s internationally recognized orders and territorial waters.”

This story has been updated with additional details from the report as well as statements from the Permanent Council meeting held on July 14.