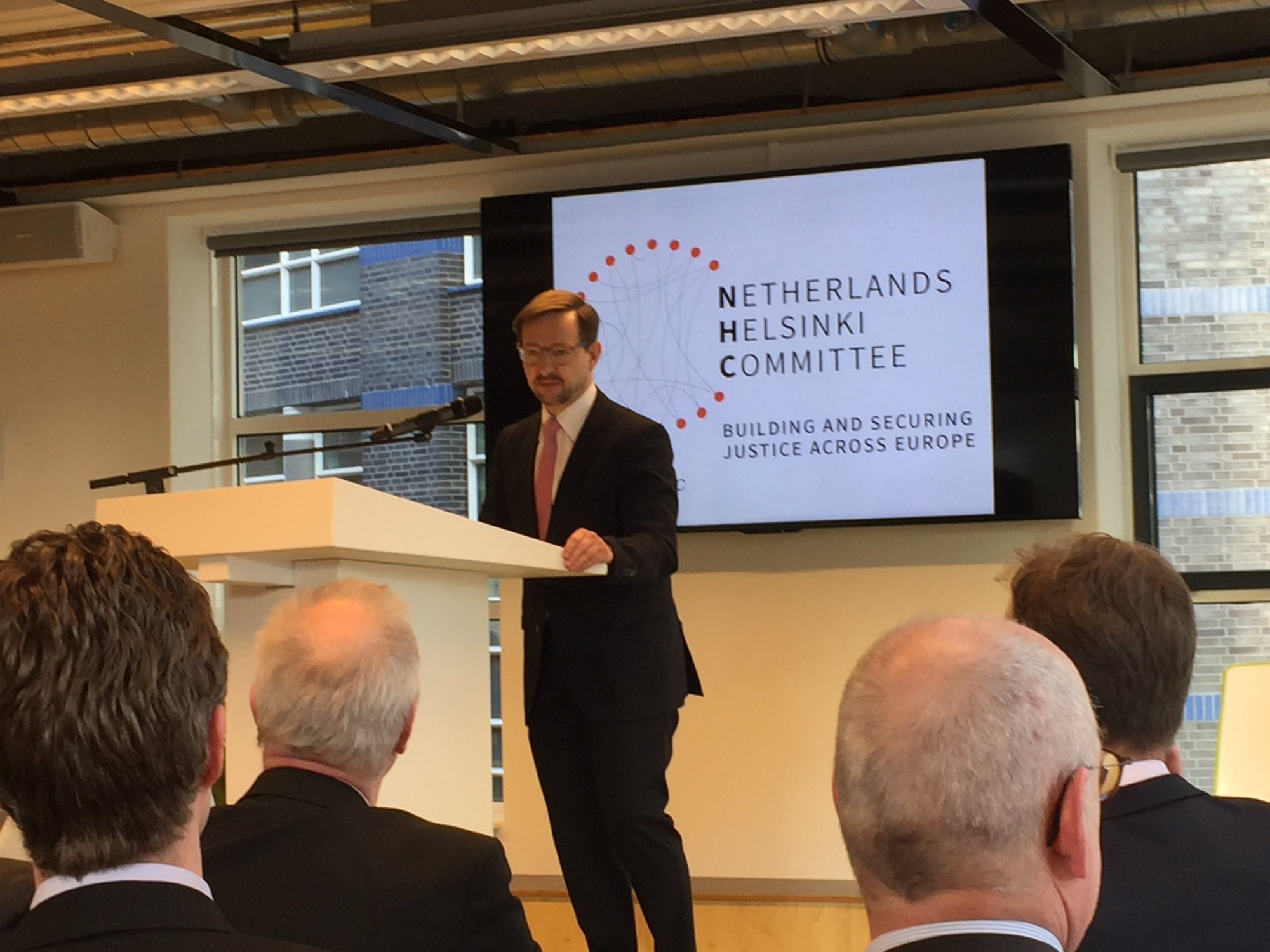 The NHC celebrated its 30th anniversary on the 14th of March with an event which included a keynote speech by the OSCE Secretary General Thomas Greminger and the presentation of the 2018 Helsinki Civil Society Award to Turkish human rights defender Eren Keskin. Arie Bloed, the driving force behind the establishment of the NHC in the 1980s, was presented with the Royal decoration of Officer in the Order of Orange-Nassau.

Ambassador Thomas Greminger, Secretary General of the OSCE, commended the NHC for ‘strengthening the security and stability of Europe’ through its work, highlighting civil society organisations as ‘essential actors’ in the Helsinki process. He praised the work of the NHC in securing the rule of law and strengthening human rights as important reminders that ‘protecting the dignity of the individual always remains an integral part of the OSCE action.

During the event, Mr. Piet de Klerk, the Chair of the NHC Supervisory Board, presented the Helsinki Civil Society Award to Eren Keskin for her persistent and ground-breaking work on human rights in Turkey.

Ms. Caroline de Gruyter, European Affairs correspondent for the NRC Handelsblad, offered her reflection on the key-note speech by Ambassador Greminger. De Gruyter regretted that ‘big power politics often takes precedence over international institutions‘ and highlighted an increasingly restrictive environment for civil society in the OSCE region. ‘The lives of human rights defenders are getting harder, NGOs are getting hampered every day‘, said de Gruyter. Secretary General Greminger agreed, stating that participating states should be held accountable for restricting legitimate activities of NGOs and shrinking space for civil society should not be accepted. ‘We need to work with a comprehensive approach to security and refuse to abandon any principles and commitments, particularly those of the human dimension‘, assured Secretary General Greminger.

In her closing remarks, Ms. Pauline Krikke, Mayor of The Hague, granted Arie Bloed, co-founder of the NHC, the Royal award of Officer in the Order of Orange-Nassau for his longstanding work with the NHC.

The early days of the Netherlands Helsinki Committee: monitoring the ‘Helsinki Process’

The NHC was established in 1987 to provide input on Human Rights, Economics and the Environment, and Security, the three ‘baskets’ of the ‘Helsinki Accords’, the closing document of the Conference on Security and Co-operation in Europe (CSCE) and precursor to the establishment of the OSCE.

The founders were the late Max van der Stoel, former Minister of Foreign Affairs and first OSCE High Commissioner on National Minorities, Arie Bloed, Editor-in-Chief of the Security and Human Rights Monitor, the late Peter Baehr, Professor of Human Rights at Utrecht University, and Pieter van Dijk, member of the Council of State of the Netherlands.

Background of the Helsinki Process

The Helsinki Accords enabled civil society organisations to hold governments accountable for their performance in implementing its principles, known as the ‘Helsinki Process’. The comprehensiveness of the Accords, in particular with regards to its political and military definition on security with respect to human rights and fundamental freedoms created an environment in which for the first time human rights violations happening internally in a country could be held accountable at an international level.

One of the primary goals of the NHC in its formative years was to monitor the Helsinki Process through the establishment of the Helsinki Monitor, a journal reporting on CSCE/OSCE developments. Over the years, the journal has developed into the Security and Human Rights Monitor, an online platform which provides news and analysis on OSCE developments relevant to security and human rights issues.

Capacity building in a post-Cold War landscape: Securing the Rule of Law in new democracies

In the post-Cold War period the NHC also began implementing capacity building projects aimed towards securing human rights and the Rule of Law. The projects encompassed legal trainings and process improvement trainings pertaining to a wide range of subjects, with a particular focus on: (i) working with the European Court of Human Rights; (ii) implementing international standards on victims’ rights; (iii) reforming prison, probation, and rehabilitation systems.

In the immediate post-Cold War period, several new countries in Central and Eastern Europe became eager to develop their implementation and protection of human rights and participated in these early projects. Today, the work continues throughout the entire OSCE region with countries also from the South Caucasus and Central Asia regularly taking part in NHC capacity building programs.

The NHC has, since its establishment, taken an active role in promoting cooperation between civil society organisations working to protect and to expand human rights. Since 2011, it has been an important member in the Civic Solidarity Platform, a network of organisations working to improve human rights across the OSCE region. It cooperates with NGOs and human rights defenders through the provision of practical support, as well as communication and increased public awareness strategies, improving public sentiment and enhancing public demand for human rights.

This article originally appeared on the website of the Netherlands Helsinki Committee.