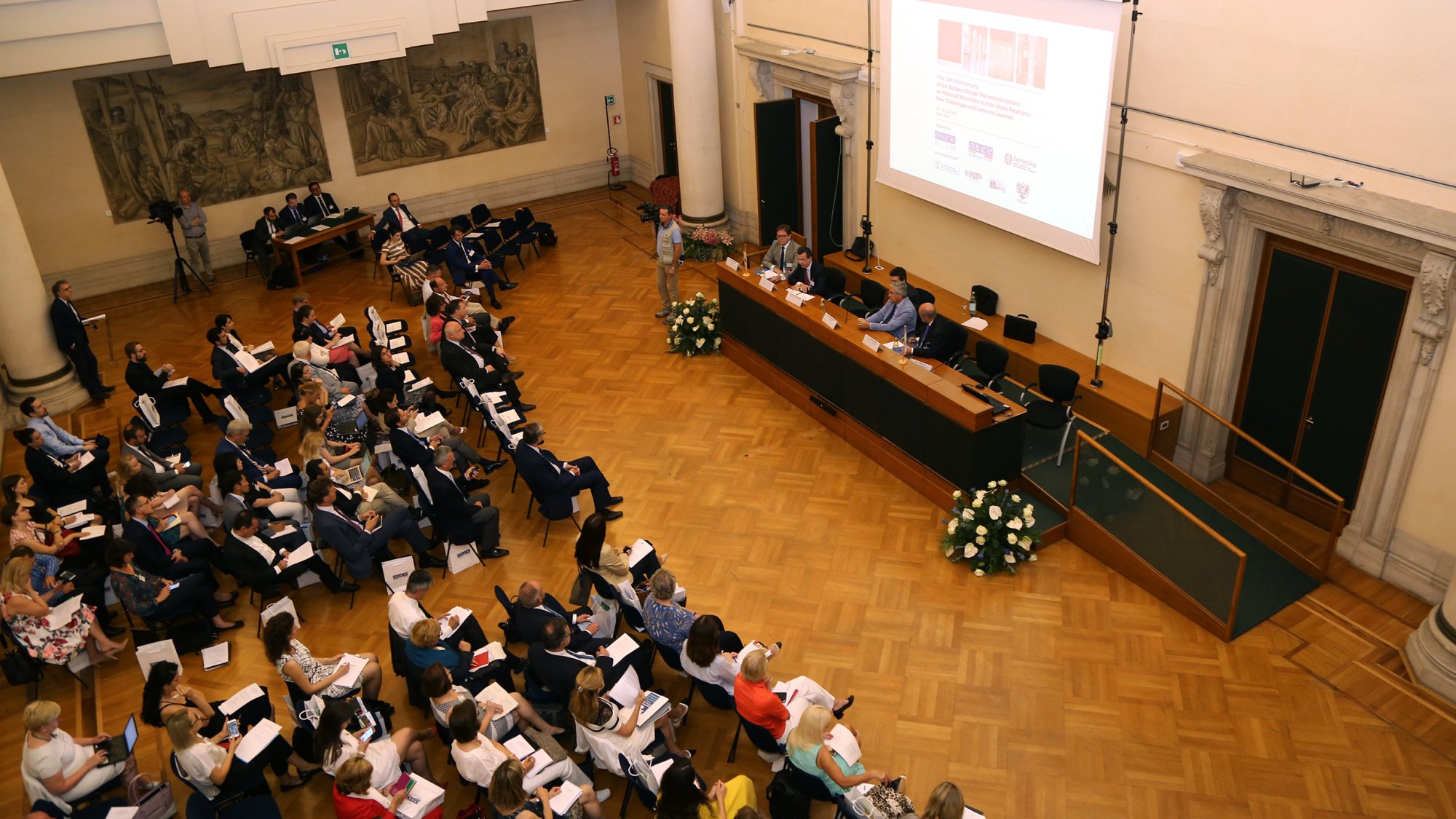 “Finding the Balance between Great Potential and Great Tension”

Preventing conflict through the promotion of sustainable integration of societies was the topic of discussion at the conference on the Bolzano/Bozen Recommendations (Recommendations). Representatives from state governments, experts, international institutions, and civil society attended the event hosted by Lamberto Zannier, the OSCE High Commissioner on National Minorities (HCNM) in Udine on 16 July 2018. The Recommendations are a set of guidelines “to clarify how States can support and extend benefits to people belonging in national minorities residing in other countries in ways that do not strain interethnic or bilateral relations.”

Nearly every state has minority group or groups within their borders (“host states”), often with so-called “kin states,” i.e. states with a, ethnic, cultural, linguistic, or religious ties to the minority group. Throughout the OSCE region, policies by “kin states” directed towards minority groups outside their borders have been and continue to be recognized as a potential for tension and conflict with the minority group’s state of residence. At the same time the benefits of kin communities serving as bridges between states has also been recognized. The Recommendations thus provide guidance based on international law that recognizes the interest of “kin states” to maintain connection with “kin communities” while ensuring good inter-state relations, and protects the sovereignty and territorial integrity of “host states.”

“Bolzano, as a place, gives us a lot to think about. Because the problem of German speaking people in Bolzano and Trento was a subject of dispute between Italy and Austria not dealt with through human rights,” said Danilo Türk, former President of the Republic of Slovenia during his keynote speech opening the conference. He went on to describe some of the lessons learned from the Bolzano dispute; namely, that protection of minority rights have to “go beyond individual human rights” and that these issues require patience, persistence, and permanent attention. This set the tone for the rest of the conference of the complexity and importance of continuous assessment of policies relating to national minorities.

Finding the Balance between Great Potential and Great Tension

Francesco Palermo, Director of the Institute for Comparative Federalism EURAC Research summarized up the complexity of state policies towards national minorities residing in other countries by describing it as, “finding the right balance between great potential and great tension.” The main factors listed by panelists during the discussion on the impact of state policies towards national minorities were political climate in and between states involved, reciprocity, and the specific context of each situation.

Ferenc Kalmár, Ministerial Commissioner for Developing Neighborhood Policy for Hungary, illustrated the importance of political context between states by sharing the experience of his country in which agreements were concluded to cooperate on national minority matters with six of Hungary’s neighboring counties. He stated that, “there are relations where this cooperation works quite well, there are relations where not as well,” noting the current deterioration in cooperation with Ukraine due to the political situation there.

Batir Tursunov, Deputy Director Institute for Strategic and Regional Studies for the Republic of Uzbekistan, described the importance of specific context. He described the Uzbek historical and regional context as a, “crossroads of civilization and cultures” that shares a border with all Central Asian countries, with 130 different ethnic groups within its borders, and a significant Uzbek minority groups in all neighboring countries. This context makes the improvement of inter-ethnic relations a key policy issue for the state.

Trends in bilateral cooperation and multilateral instruments were also covered during the conference. Bob Deen, Senior Advisor HCNM, described two current and contradictory trends, the erosion of multilateralism and increase in nationalization making the Recommendations increasingly difficult to use in multilateral mechanisms. Natalie Sabanadze, Ambassador of Georgia to the EU, noted the risks involved with the bilateralisation of minority protection, which can result in unequal protection of minorities due to differing interests of state and unequal bargaining power between states.

The topic of civil society representation was also brought up during the discussions. It was recognized that while the Recommendations are directed at states themselves, and multilateral instruments like the Venice Commission respond only to state requests, civil society had an important role to play in awareness raising for specific issues.

In general, the Recommendations were commended for providing useful guidelines on policy formation based on international legal standards but implementation and dissemination of best practices fell short and required more work.

The closing remarks of Zannier focused on follow up for the Recommendations. He noted the need to further examine and develop guidance on topics like conferral of citizenship and collective rights. Zannier praised the interesting mix of participants resulting in open discussion and expressed the desire to replicate the format in the future through, inter alia, regional roundtables. The need to increase awareness of the Recommendations was also brought up, in particular through forums with parliamentarians from OSCE countries and at international forums like the UN General Assembly this fall.

Throughout the conference, the sentiment that the Recommendations and topic of state policies towards national minorities are “more relevant today than when they first came out” highlighted the need to continuously assess and improve understanding and implementation of the Recommendations moving forward.

For more SHR coverage on the Bolzano Recommendations and national minority issues in relation to the crisis in Ukraine click here.