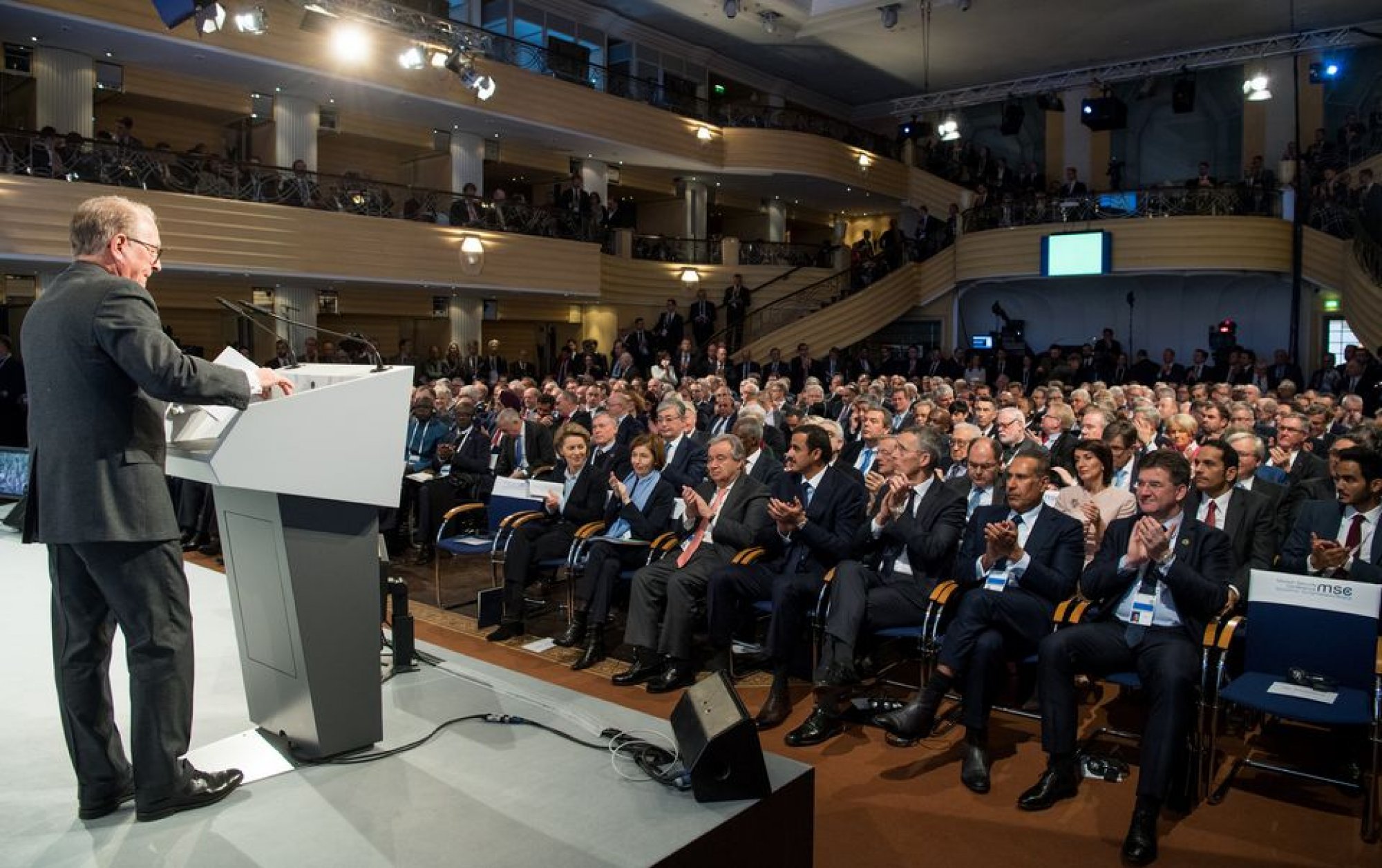 Munich Security Conference: A World Out of Joint

Every year in February, world leaders gather at Munich’s Bayerischer Hof to discuss the state of world affairs. The set-up of the conference makes it possible for ‘friends’ and ‘enemies’ alike to mingle and encounter each other in the overcrowded corridors and bar and coffee areas of the luxury hotel. Minsters and Presidents can be seen crisscrossing at a quick pace in the conference area, followed by large groups of advisors and diplomats carrying documents and briefcases.

The motto of this year’s Munich Security Conference (MSC) “to the brink and back” was reflected in the many speeches delivered at the plenary hall. Ambassador Wolfgang Ischinger, the Chairman of the MSC, warned in his opening statement that the international order was under threat and that the many warning signals from around the world needed to be heard.

Regional instability in the Middle East, the war in Syria, tensions on the Korean Peninsula, the Ukraine conflict, deepening divisions between NATO states and Russia, as well as the increasing nuclear threat were among the main topics raised in most statements. The plenary hall was filled by a predominantly male audience, including 20 heads of state and government, 80 Ministers from around the world, as well as senior policy makers, defence experts and diplomats.

Most statements had a strong focus on increasing military spending, bolstering deterrence, and projecting strength.

For example, NATO Secretary General Jens Stoltenberg noted that allies were in the process of stepping up their military spending. He specified that while in 2014 only 3 allies had met the 2% military spending threshold, today already 8 allies were meeting this target. He also clearly reaffirmed the Alliance’s support of nuclear deterrence. “The goal is a world without nuclear weapons, but as long as they exist, NATO will remain a nuclear alliance,” he stressed.

Many European politicians, including German Minster of Defence Ursula von der Leyen, German Foreign Minister Sigmar Gabriel, French Minister of the Armed Services Florence Parly, as well as French Prime Minister Edouard Philippe stressed the need for the European Union (EU) to improve its cooperation on defence matters. The EU’s Permanent Structured Cooperation on Security and Defence (PESCO) was raised several times as a positive example of how the EU is planning to increase investment in defence, and to cooperate in developing defence capabilities.

Interestingly, this ambitious plan was met with considerable scepticism from NATO Secretary General Stoltenberg, who warned that this could lead to “discrimination of non-EU members within the NATO alliance”. He specified that “the EU cannot protect Europe by itself” as the NATO countries outside the EU played a fundamental role in defending Europe. In Stoltenberg’s view, the EU’s plans on defence needed to be conceived as a complement rather than an alternative to NATO.

The MSC also confirmed the deepening East-West divide, continuing tensions between Russia and NATO states, as well as divisions over Ukraine. Sadly, a planned meeting of the Normandy Format on the margins of the MSC was cancelled at the last moment.

Russian Foreign Minister Sergey Lavrov repeated his usual points. He stressed that Russia wanted to create indivisible security in Europe and strengthen pan-European security institutions such as the OSCE. “Unfortunately, the calls for indivisibility of security were not heard,” he emphasised. He lamented NATO expansion to the east, NATO’s military build-up on Russia’s borders, both of which, in Russia’s view, undermine strategic stability. With regard to the Ukraine conflict (he referred to it as an “intra-Ukrainian conflict”), Lavrov stated that Kiev undermined diplomatic efforts within the Normandy Format as well as the Trilateral Contact Group.

Ukrainian President Petro Poroshenko delivered an emotional statement, appealing to western leaders to continue their support for Ukraine’s sovereignty and territorial integrity. He stepped down from the podium and held up a European flag. Tragically, there were few western leaders in the room when he spoke. He called for keeping up sanctions against Russia and added that “appeasement of the aggressor only brings more aggression”.

H.R. McMaster, Lieutenant General and National Security Advisor to the US President, raised three issues in his speech: (i) the need to ensure the non-proliferation of weapons of mass destruction; (ii) the importance to defeat jihadist organizations; (iii) and the necessity to strengthen the international foundations for peace and security. With regard to that last point, McMaster said that international foundations were “under threat by nations that corrupt their purpose”. He went on to say that the “respect for sovereignty” was under threat as “repressive powers aim to undermine democratic processes”. To make his point even more clear he stated: “With FBI indictment, evidence of Russian interference [in the US election] is incontrovertible”. He stressed that the US would act against all who advanced campaigns of espionage and disinformation. He concluded by saying that all of Russia’s actions have now led to a situation where “we are now all united against Russia”.

Dialogue and détente as a complement to deterrence

Given this confrontational rhetoric, one of the main questions that emerged was how this continuing East-West divide could be bridged. On this point, there was a striking absence of ideas on how to deal with the continuing tensions. The MSC thus also confirmed the urgency to take a fresh approach to this issue.

Thomas Greminger, OSCE Secretary General, who spoke to SHR Monitor on the margins of the MSC, emphasised precisely this point. He said that “with deterrence alone we will not be able to move away from the brink. What is clearly missing is dialogue and détente. They should be a complement to deterrence.” Greminger also said that “my message here in Munich is to offer the OSCE as an inclusive dialogue platform that can bring added value in the form of the Structured Dialogue on military security issues.”

In more general terms, the MSC also confirmed an absence of global leadership. From the many statements, one could gain the impression that the world was out of joint. The absence of a global superpower that would take on the many crises and launch innovative solutions, including through dialogue, was striking. Neither the US nor European leaders created the impression that they were willing to shape world affairs and the future world order. There was an eerie absence of western, liberal unity. Instead, many MSC statements showed that there was a high risk of escalation, be it on the Korean Peninsula, the Middle East or in Europe.