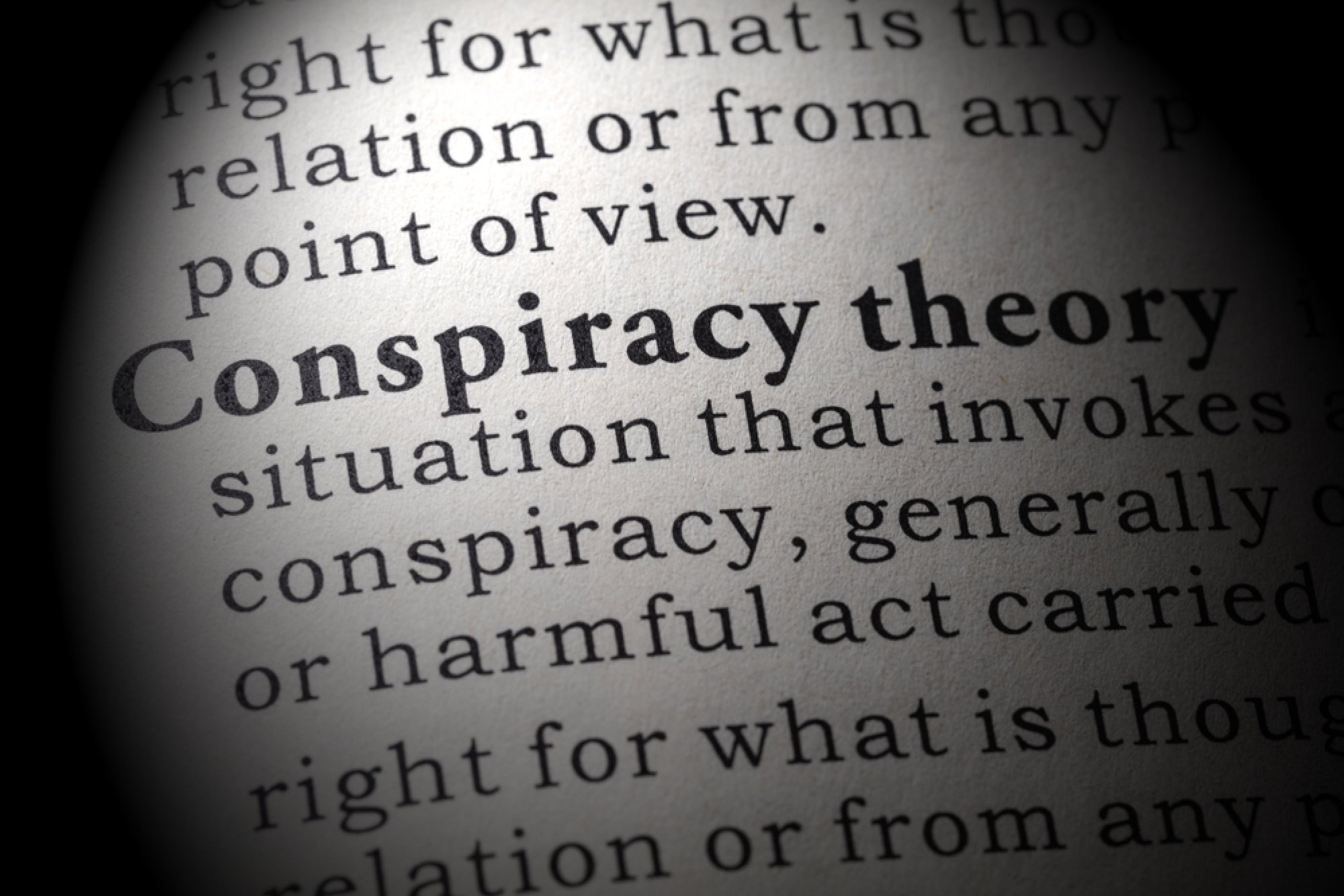 The term misinformation is often used to refer to objectively false information. More specific definitions hold that “misinformation” is a collection of poorly concocted descriptions of reality, ranging from partially to wholly false statements and theories. Such definitions constitute part of the rationale behind several policies and strategies designed to tackle misinformation, including platform-driven techniques to flag, demote, ban and deplatform “fake news”, and the users who disseminate them on Facebook, Twitter and YouTube.

The problem with this conception of misinformation as false information is that it omits the partisan context in which it emerges, and by doing so, aggravates the political divisions at the very origin of the production of misinformation. From an informational standpoint, misinformation can be seen as a product of partisan divisions, potentially leading to further misunderstandings between opposing groups, who rarely communicate with one another or rarely encounter the same information, due to radically different sets of ideas and resulting media diets. In this context, the resulting misinformation is less a collection of false facts used to smear opponents, but rather a poorly constructed understanding of their perspective and intentions.

The “New World Order” conspiracy theory is an example of how misinformation forms and is disseminated amidst homogeneous online political subcultures. Though the term is used in current mainstream debates to refer to powers swaying from the West, libertarian advocacy groups in the United States have used it in a different sense since the nineteen-fifties. At the time, the term was used to refer to a cabal of international organizations (the Trilateral Commission, the Council of Foreign Affairs and the United Nations, amongst others) and worldwide elites conspiring to subvert the sovereignty and liberties of free nations. While today adepts of the conspiracy describe the “New World Order” as an organization for back-door “totalitarian” policies, it was originally perceived as a totalitarian socialist institution, given that socialism was widely considered as the original epitome of totalitarian collectivist governments and globalist policies.

Today, the conspiracy continues to carry this partisan undertone. It is widely used by users from fringe messaging boards such as 4- and 8chan, and mainstream platforms (YouTube, Facebook, Twitter) as the product of an ongoing struggle between “nationalists versus globalists”. It is within this framework that, in the eyes of “New World Order” theorists such as Alex Jones and Luke Rudkowski, the cabal came to include a much larger, post-war “liberal establishment”. According to them, globalist and multicultural projects, financed, among others, by the Hungarian exile and billionaire philanthropist George Soros, continue to threaten the ethnic and economic sovereignty of European and American populations.

This may explain why the conspiracy of the “New World Order” is often voiced online by far-right figures, who often depart from the assumption that post-war institutions are essentially anti-nationalist, collectivist and multiculturalist projects. When mining data from a platform like YouTube, for example, we find that alt or far-right channels (collected in this case by Dutch journalist Dimitri Tokmetsis) have increasingly used the term “New World Order” (or “NWO”) in conjunction with terms such as “liberal”, “media”, and “establishment”. Media outlets often labeled as “mainstream” have instead linked the term to its current meaning in international relations debates or downright conspiracies (with the exception of Russia Times), only to be attacked in comment sections for, amongst other motives, “trying to switch the meaning of NWO” or “pathetic attempts at subversion”. 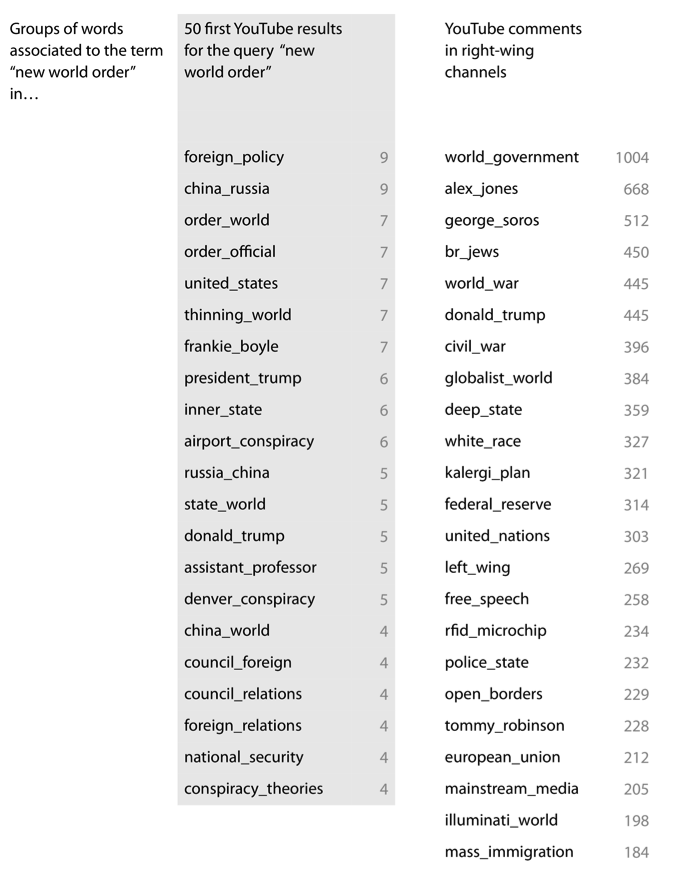 Group of words frequently associated with the term “new world order”. Left hand column shows the first 50 search results on a YouTube query (the majority of results being news media reports). The right hand column shows right-wing comments on YouTube spanning from 2009-2018. Numerical values are frequencies of terms occurring together within a three-word window in each of these corpora.

When fact checked or “debunked” by news media or banned from media platforms (in this case YouTube), channels supporting such conspiracies begin suspecting that they are persecuted and censored for compromising platforms with their independent media and truths. As a result, platforms and media outlets are suspected by them as being part of the New World Order cabal. And, as retaliation, banned channels resort to alternative platforms (often called “alt-tech”), who in turn present themselves as safeguards of “free speech” and “true” or sensitive information.

The danger of applying strategies that ignore the partisan character of misinformation is that it occasionally aggravates the very political divisions that sustain the creation and dissemination of misinformation. Though the ban on false information has at times been effective in blocking deliberate fake news campaigns online, it is met with considerable (political) resistance from affected users. Be these Alex Jones or users engaged in sharing stories linked to wider conspiracy theories, this strategy is taken to be an inconspicuous form of political censorship disguised as objective fact-checking.

Tackling misinformation online is thus less about “flagging” or banning users for their lack of objectivity than attenuating the conflicts from which they first emerged. In practical terms, this may imply designing communication environments that can bridge consensus between citizens with radically different information diets. Adequate means of dialogue can reduce the divisions from which citizens mischaracterize institutions and one another, within hyper-partisan narratives.

The challenge here, is for public institutions to formulate initiatives attuned to current means of communication. While recent initiatives have sought to soothe profound domestic crises by establishing a direct dialogue between divided entities — citizens and state officials — citizens still access these discussions through environments already divided by so-called “filter bubbles”, such as YouTube, Twitter or Facebook. To tackle divisions established there, there is ample opportunity for public institutions to consider what dialogue means in terms of information and information systems. This task could invite professionals in national or international conflict resolution to practice recommending what techniques, skills and values to best implement in platform algorithms.

It would, however, be too easy to focus policy applications on information design alone, since the conflicts that fuel conspiratorial narratives are rooted in more profound historical issues. As conspiratorial narratives gain popularity, so do the intellectual tradition and political culture they are part of. The proliferation of these narratives in the form of conspiracy theories is less indicative of poor education or a popular inaptitude for “media literacy” than of a resurge of radically divergent political worldviews, supported by different interpretations of history and selections of facts. An urge for dialogue is no concession to extremist or absurd ideas, but addresses an urgent need to mediate the unresolved conflicts that keep them alive.

*Emillie de Keulenaar is a junior researcher at the universities of Utrecht and Amsterdam. Her research focuses on the production of disinformation in contentious debates and in the dissemination of far-right political thought across fringe and mainstream platforms.