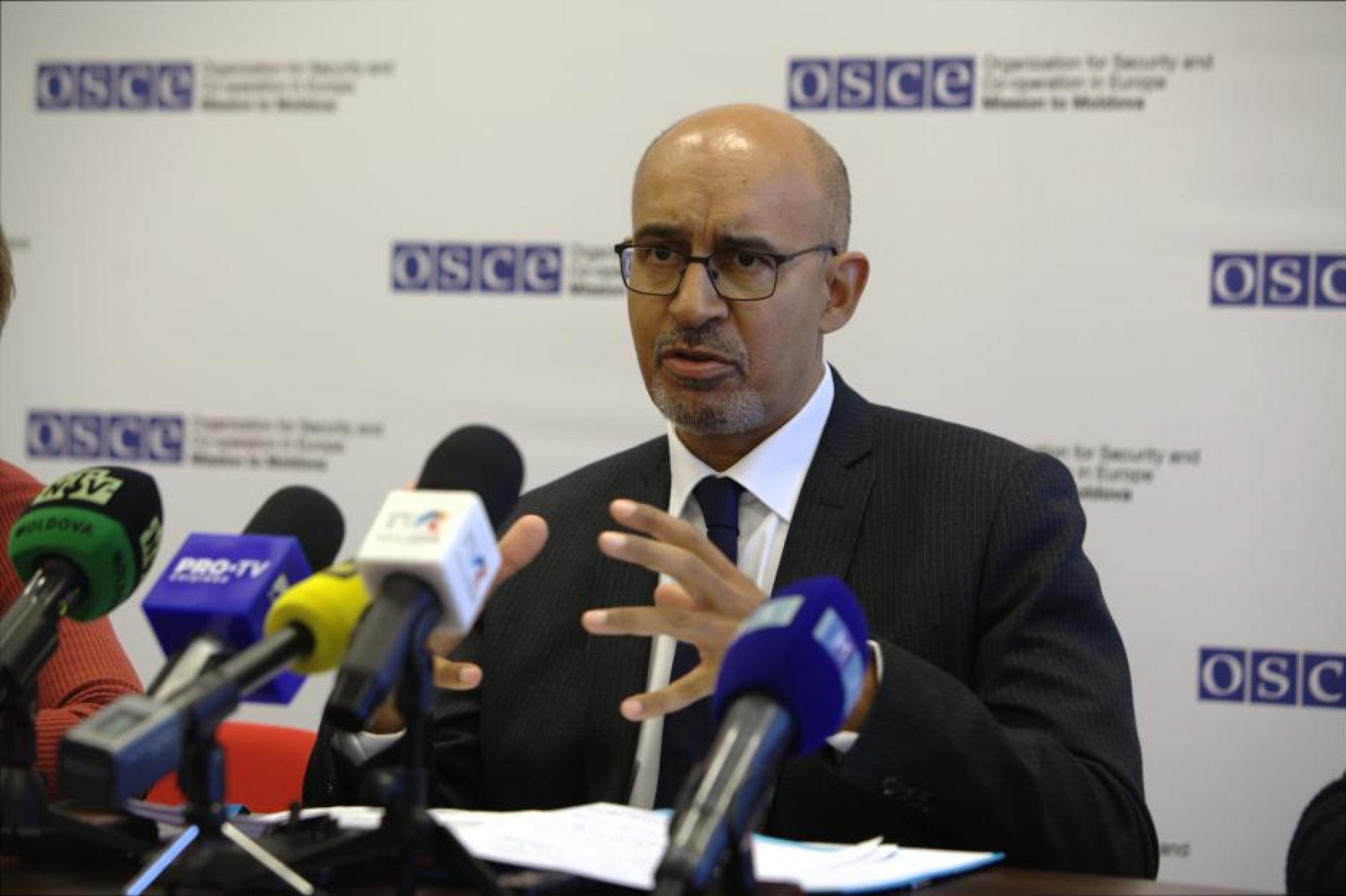 “I observe a banalization and generalization of violence against the press”

In this interview, Harlem Désir, the OSCE Representative on Freedom of the Media, underlines the responsibility of governments and society as a whole to protect the media and journalists.He also outlines a four-level approach to tackle the phenomena of disinformation, “fake news”, and intentional manipulation of information.

SHR Monitor: How do you assess the state of media freedom in the OSCE region? Are there any trends that you can identify? In your report to the OSCE Permanent Council in July, you stated that the safety of journalist remains your biggest concern.

Harlem Désir: In general, I must say that I am quite worried because journalists are increasingly under attack. I observe a banalization and a generalization of violence against the press, as many people seem to think that they have legitimate reasons for attacking the media. This makes the work of journalists very dangerous. The press is an institution of democracy but, unlike other institutions, they do not have an army or a police. They rely on the protection of the state and of society as a whole. It is therefore very important to remind governments that they have a responsibility to protect journalists, even if by nature the media is critical.

For example, journalists who are investigating corruption and economic criminality are often attacked and threatened, and unfortunately even killed. One recent tragic case is Daphne Caruana Galizia in Malta or Ján Kuciak in Slovakia.

There are other examples, that have not attracted as much international attention, like the murder of Vadim Komarov, who died last June after being attacked and left in a coma in May in the city of Cherkasy in Ukraine. He was known for his work on uncovering local corruption.

We should also remind ourselves of Pavel Sheremet in Ukraine, or Anna Politkovskaya in Russia.

Since there is such a high rate of impunity of attacks against journalists, we have to insist that none of these crimes will remain unpunished. Impunity is a second crime against murdered journalists and an encouragement for more attacks in the future. All threats must be investigated and publicly condemned by governments. All the journalists that have been murdered in recent years have actually been threatened before. But the complaints are not taken seriously enough. Unfortunately, no place is immune. The risks exist everywhere for political or economic reasons. The 57 participating States have adopted a landmark Ministerial Decision on Safety of Journalists in December 2018 in Milan. It must be fully implemented.

The second category of threats is linked to the political situation in certain countries and the critical role of the media. There is still a lot of harassment in those countries and journalists are prosecuted under false accusations. This is currently, for example, the case in Turkey, where many journalists are detained and where I have been campaigning for their release. Recently, several journalists of Cumhuriyet, such as Kadri Gürsel, have been released. However, prominent journalist Ahmet Altan has been re-arrested on 12 November, just one week after his initial release. In some other OSCE states there is still a refusal to accept the role of the press in democracy and, as a result, those states are not sticking to their media freedom commitments.

There is also a perception in certain countries, for example in Azerbaijan, that the media must mainly be an instrument for those in power. In many countries, there is an attempt to have as much control over the media as possible.

But when the state does not accept the idea of giving space for strong, independent media, there is a problem not only for the media but for democracy itself. The quality of democracy very much depends on the quality of information that is available to the general public.

Looking at the history of democracies, there have always been two or three strong, independent newspapers that were able to influence the debate among the political actors, based on independent sources of information, diversity in commentary, and high ethical standards.

In addition, the media is increasingly under financial and economic pressure. The digital transformation has created many opportunities, but has also totally changed the business model. People are now used to getting information for free. Hence, only a few, usually bigger, media outlets manage to get enough online subscriptions and succeed in adjusting to digitalization. Smaller ones really struggle.

You organized a high-level conference in Russia on 6 November on the topic of ‘freedom of the media and safety of journalists in the Russian Federation and in the OSCE region: challenges and opportunities in the digital age’. What were the outcomes of this conference?

We wanted to actively engage Russia on media issues. It was the first such conference in Russia. It was organized by my Office, with the support of the Russian Ministry of Foreign Affairs.

We wanted to give the opportunity, for the first time, to independent media and journalists to openly speak with the authorities, and to do this in Moscow. It was important for us, because we have intervened on cases of journalists facing safety or legal situations on several occasions, as well as on multiple legislation that have an impact on freedom of expression and media freedom.

At the conference, not everybody agreed on everything, but there was an open and frank debate with the participation of both independent journalists and media, like Ivan Golunov, Igor Rudnikov, Noveya Gazeta, Bell, and state owned media like Sputnik and RT. We also invited international NGO experts.

The Minister of Foreign Affairs, Sergey Lavrov, agreed to open the conference with me and to take part in a discussion with journalists.

We discussed safety of journalists, the media freedom environment, and legislation, including on the Internet, “fake news” and disinformation. I think it’s important to have these kinds of discussions openly in Russia, like everywhere else in the OSCE region. The authorities accepted it at this conference. It’s a first step. We will continue to monitor the situation, to discuss improvement of media freedom, and to engage with authorities.

How were media representatives who attended the conference chosen?

We invited both journalists from critical and independent media with no links to the government, and journalists from mainstream media. Some were proposed by Russia. But it was clear from the beginning that the conference had to be open to all kinds of media. The participants told us that it was the first time they had such a discussion all together. Of course, there was controversy, polemics, lively discussions, but also some convergences, like the need to protect the safety of journalists.

On another topic: Why is it that when you give your bi-annual report to the OSCE Permanent Council, no media representatives are allowed into the room? I am aware that your report is made public immediately afterwards. However, I worry that closing the meeting to the media could send a wrong signal.

The report is published just after the presentation, as you say. But in fact, I have no reason to object to the idea to open the meeting to the media. But it is up to OSCE participating States to take a decision.

Could you decide to have a press conference after your presentation?

Yes, this could be an option.

Based on your mandate, how concretely can you help to improve the situation of media freedom in the OSCE region? Are you sometimes constrained by politics or diplomacy?

In my mandate, the early warning function is the core element. I actually have the duty to raise any violation of media freedom commitments in OSCE participating States as soon as possible. In this context, I intervened roughly 400 times last year, mostly in a public way. The authorities are sometimes unhappy with this, but I do it on the basis of the mandate that the 57 participating States gave to me.

The second aspect of the mandate is providing assistance to OSCE states to help them improve their legislation and policies. We try to support states so that they can better fulfil their commitments. For example, we are now working with Albania on a new legislation, which will affect online publications. We have also been working on this issue and others with North Macedonia, Montenegro, Slovakia, Kyrgyzstan and Uzbekistan in the last few months.

Yes, in many cases. For example, recently in Montenegro and North Macedonia the essential part of our advice was taken into account. In several countries, journalists who were detained, and on behalf of whom we had intervened, have been released. With some other states, we don’t have that same result, which I regret. But we will continue to intervene on all situations and try to convince the authorities.

Do states ever complain to you about your public statements?

Yes, they do sometimes. But most understand that what we really want is to help them improve their own media freedom situation according to the best international standards. While much depends on their goodwill, I think that we can have an impact, particularly in those countries where the OSCE has field missions and we bring added value and expertise.

How does your office try to tackle the issue of disinformation and fake news?

On 18 November, we will organize a meeting with the ‘transatlantic high level working group on content moderation online and freedom of expression’. The meeting will include experts from the media sector, academics and lawyers.

The new trend of disinformation, “fake news”, and intentional manipulation of information is detrimental to the credibility of the media. The world we are living in today is very different from the past, when we used to buy newspapers at the newsstand.

Today, information appears very quickly online, without any kind of filter or hierarchy. Most people don’t have the time to check the quality and the reliability of the information. In addition, technically it is becoming increasingly easy to publish false content, false photos or videos. In this type of environment, professional journalists are more necessary than ever before.

I believe that we have to address the problem on several levels via a multi-stakeholder approach.

First, we have to increase awareness in societies of the existence of manipulated information. Media literacy is very important. Citizens have to develop critical thinking and have to understand that they will be confronted with a lot of false information.

Second, it is very important to encourage good quality of information, for example by introducing rigorous fact checking. Here the media itself is required to follow a high professional standard. For example, we have been organizing seminars and workshops on this issue with the support of journalists from Norway, Central Asia and the South Caucasus.

As a third point, the state itself has to respect the press and to show openly that it treats the press correctly. Smear campaigns against the press have to be stopped because they result in a situation where the press is put on the same level as silly people who publish “fake news”. And, eventually, there is a high risk that the public does not trust the press anymore. This situation leads to some form of relativism, and to the idea that in any case, everybody is lying to everybody. This has to be avoided at all costs.

As a fourth point, social media platforms such as Twitter or Facebook also have an important role to play. I think that they have a responsibility, for example, to delete false accounts. They can do more to combat bots and troll factories, and thus prevent the spread of false information, for example during election campaigns.