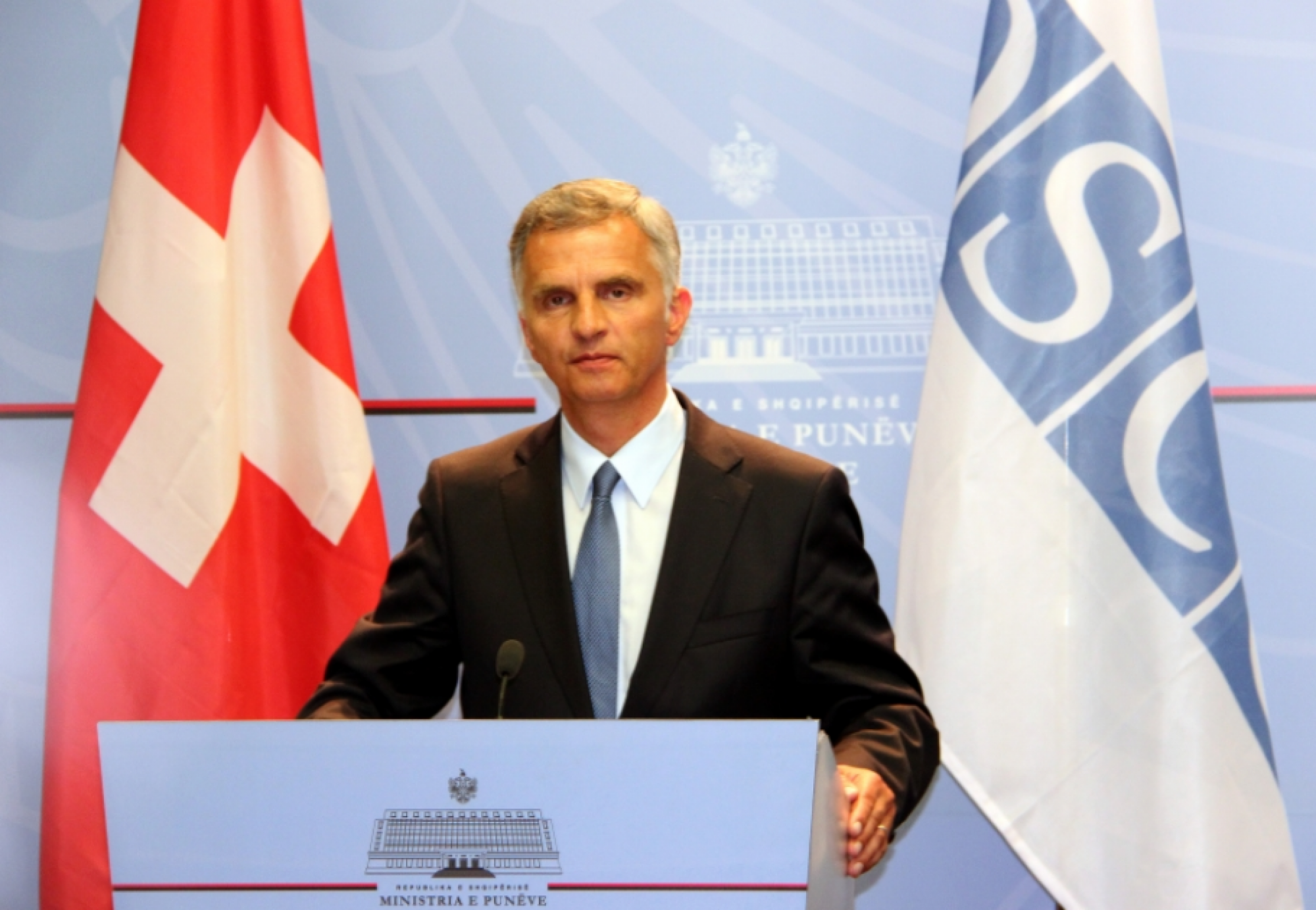 The Ukraine crisis has dominated the Swiss OSCE Chairmanship in 2014. Switzerland had well prepared its second OSCE presidency (after 1996). In cooperation with Belgrade, Switzerland had presented ten priorities in mid-2013. Yet, most of the planned activities suddenly became less relevant with the outbreak of a serious crisis in and around Ukraine. As Chairperson-in-Office, Swiss President Didier Burkhalter at once declared his readiness to assist the conflict parties in finding a solution to the crisis. At their Ministerial Council in 2011, OSCE states had agreed to strengthen OSCE crisis management capabilities. The Ukraine crisis thus was the first real test case for implementation of the Vilnius Decision No. 3 and an opportunity for the OSCE to play a more constructive role than during the Russian-Georgian war (2008) and the crisis in Kyrgyzstan (2010) where political consensus for effective OSCE action had been lacking.

An early success of Swiss OSCE crisis diplomacy in the Ukraine crisis is largely forgotten. On 16 February 2014, pro-Western protesters vacated the Kyiv city hall after an 11-week occupation. Switzerland’s Ambassador to Kyiv, Christian Schönenberger, was praised for his mediation efforts, but only two days later, tension escalated in Kiyv and President Victor Yanukovych fled the country. On 24 February, Didier Burkhalter launched four OSCE initiatives in a speech at the UN Security Council. Firstly, he proposed to set up an international contact group to enable a dialogue between Kyiv and Moscow. Secondly, he appointed Ambassador Tim Guldimann as his special envoy to Ukraine. Guldimann was one of Switzerland’s top diplomats, having successfully mediated between Russia and Chechnya during the Swiss 1996 OSCE presidency. As Swiss Ambassador to Tehran and head of OSCE missions in Croatia and in Kosovo, he also gained experience in dealing with sensitive dossiers. Thirdly, Burkhalter offered the services of the OSCE to monitor the planned presidential election in May 2014. Fourthly, he launched the idea of investigating human rights violations and to publish an OSCE report about it. That all initiatives were implemented in the following weeks was an encouraging sign. Despite unprecedented tension between the West and Russia, the OSCE was still able to play a useful role.

In retrospect, the OSCE under Swiss Chairmanship was instrumental for three breakthroughs in the international management of the Ukraine conflict. Firstly, Didier Burkhalter was able to convince Russian President Vladimir Putin by phone to give his green light to a planned OSCE field mission to Ukraine. In early March, Russia had been against such an OSCE presence in Ukraine, having no confidence at all in the OSCE. The “double impartiality” of the Swiss OSCE presidency convinced Russia to consent to a field mission, in addition to Burkhalter’s argument that such a mission would also protect rights of the Russian minority in Ukraine. Switzerland closely coordinated its shuttle diplomacy with the German government that had pushed for an OSCE role in the Ukraine conflict from the beginning. Tim Guldimann, well connected both in Berlin and Moscow, was particularly helpful in these March negotiations building consensus for the OSCE field mission in Ukraine. In retrospect, the deployment of the Special Monitoring Mission (SMM) on 21 March 2014 was the biggest success of the Swiss Chairmanship. It was one of the largest mandated field missions in the history of the OSCE, and the first mission authorized by the OSCE in over ten years. It provided independent “eyes and ears” on the ground – and it was charged with observing the implementation of the Minsk agreements, including monitoring the ceasefire and controlling the porous Russian-Ukrainian border in a post-conflict phase.

Secondly, Burkhalter also successfully hosted talks in Geneva in April 2014, allowing for the first direct meeting of Russian Foreign Minister Sergey Lavrov and Ukrainian acting Foreign Minister Andrey Deshchytsa. When Moscow and Kyiv struggled over the implementation of the Geneva Agreement of 17 April 2014, Swiss diplomacy came up with an innovative “Road Map” in early May, detailing the sequential steps needed between Geneva and the Ukrainian presidential elections. Burkhalter presented this Road Map to Putin on 7 May in Moscow – being the first Western statesman meeting personally with Putin since the annexation of Crimea.

Thirdly, Swiss diplomat Heidi Tagliavini was appointed to accompany talks between Russia and Ukraine in the context of the Trilateral Contact Group. Switzerland “woman for Russia” was sent to Grosny in 1995 to mediate for the OSCE between conflict parties and to Georgia for the United Nations where she worked for four years. In 2014, her contact group was involved in the ceasefire negotiations between Moscow, Kyiv, and pro-Russian separatists in the East of Ukraine, leading to the Minsk agreements in September 2014. It was also instrumental in helping to secure access to the MH17 crash site.

While the civil war in Eastern Ukraine dragged on, OSCE countries were still able over the summer to build consensus for two decisions. Firstly, the mandate of the SMM was extended to March 2015 on 22 July 2014 – after Western sanctions against Russia and after the downing of MH17. Secondly, on 24 July 2014 the OSCE also unanimously adopted a decision to deploy OSCE observers to two Russian checkpoints at the Russian-Ukrainian border, implementing a Russian idea presented in Berlin in early July.

For the relatively small Swiss Chairmanship, the Ukraine crisis signified a huge challenge. Yet, Swiss diplomacy cleverly used the crisis to make the OSCE and its conflict management tools visible. In 2014, the OSCE returned to playing a relevant and useful role in European security. World leaders like Barack Obama or Angela Merkel were again made aware of the organization and its helpful services to facilitate dialogue and build confidence. Yet, the three-week decision-making process in March 2014 necessary to achieve consensus for the decision to deploy a big field mission to Ukraine also demonstrated the downside of the OSCE way of functioning. At the Basel Ministerial Council on 4-5 December 2014, Switzerland proudly presented the achievements the OSCE was able to realize as a crisis manager in Ukraine and as a mediator between the West and Russia – while acknowledging that the Ukraine crisis at the same time had seen a flagrant violation by Russia of core OSCE principles and norms (and of international law too, of course).

In Basel, no political declaration on the Ukraine crisis was adopted. Innovatively, Burkhalter introduced a “summary of the first day of discussions at the OSCE Ministerial Meeting” to present the viewpoints of the vast majority of OSCE participating states who wished to “deplore the tragedy of lost lives and human suffering” and the “shock” of the downing of flight MH17. The fault lines between the West and Russia thus were made part of the public record even without a formal OSCE declaration on the Ukraine crisis. Burkhalter stressed that despite diverging assessments on the causes of the crisis, “many states held the view that the crisis is the result of the pressure of one participating state against another”, e.g. Russia against Ukraine. Swiss diplomacy also introduced, in close cooperation with Serbia, the idea to launch an independent panel of eminent persons to address the broader crisis of European security resulting from the Ukraine crisis. Again, it was not possible to find consensus among OSCE ministers to launch this panel with a formal OSCE Council decision. Led by Ambassador Wolfgang Ischinger, the high-level panel will make suggestions on how to further strengthen trust throughout the Euro-Atlantic and Eurasian regions and to build a more resilient system of European security. The panel is expected to produce a final report by the end of 2015.

The role the OSCE was able to play in the Ukraine crisis markedly differed from the role it played during the Georgia war in 2008. At the time, the EU under French presidency dominated Western crisis management. Nicolas Sarkozy negotiated a ceasefire between Georgia and Russia. Russian pressure resulted in the closing of an existing OSCE field mission in Georgia in December 2008 and the experience left the OSCE severely damaged. In contrast, the Swiss Chairmanship reacted well to the Russian annexation of Crimea and the escalating civil war in the East of Ukraine. Didier Burkhalter assumed leadership as a crisis manager. Swiss impartiality helped the OSCE at this critical junction and helped the organization to contribute to de-escalation in the conflict at various stages. In retrospect, Finnish diplomats – Finland chaired the OSCE in 2008 – now privately acknowledge that a more active OSCE role might have been possible at the time. In 2014, the OSCE profited from the fact that the EU, in contrast to August 2008, was now perceived as a direct conflict party.

In 2015, Switzerland will remain active in the OSCE management of the Ukraine crisis. Ambassador Tagliavini will continue her work in the Trilateral Contact Group. Lessons learnt in the Ukraine crisis will feed into the Helsinki+40 reform process as well as the review exercise of Wolfgang Ischinger’s high-level panel triggered by the outgoing Swiss OSCE chairperson. Due to the joint candidacy with Serbia in 2011, Switzerland will also remain involved in Serbia’s 2015 Chairmanship of the OSCE, as a more active “troika” member than usually. Even if Swiss diplomats now prefer the wording “consecutive chairmanship” over “double presidency”, OSCE participating States including the United States and Albania will remind Switzerland of its 2011 promise to “mentor” Serbia’s presidency. This relates specifically to the Western Balkans – Swiss diplomat Gérard Stoudmann will remain Special Representative for the Western Balkans in 2015. That Germany and Austria will chair the OSCE in 2016 and 2017 respectively are also good news. These OSCE presidencies promise a certain degree of continuity of the Swiss activities in 2014 and bear well for the future relevancy of the OSCE.

CHRISTIAN NÜNLIST is Senior Researcher at the Center for Security Studies (CSS) at ETH Zurich. He is the author of a recent chapter on the OSCE crisis management in the 2014 Ukraine Crisis (in German, November 2014), on which this blog entry is mostly based, as well as the co-editor of “Perspectives on the Role of the OSCE in the Ukraine Crisis” (December 2014).