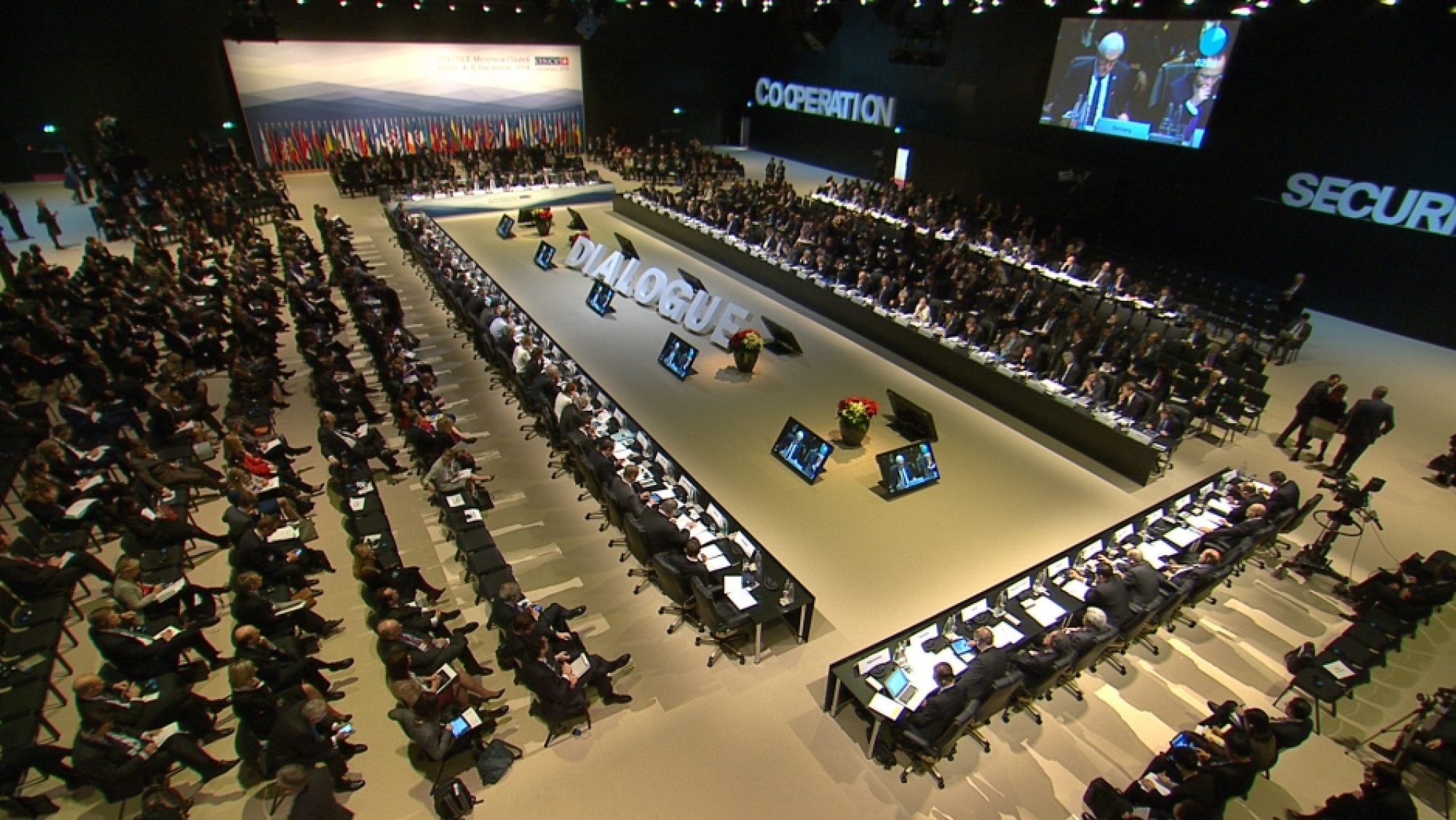 LIVE BLOG: 21st OSCE Ministerial Council meeting consolidates role of the OSCE as a forum for dialogue between East and West

The 21st Ministerial Council (MC) meeting in Basel revealed that eastern and western OSCE states have fundamentally differing views on Euro-Atlantic security in general and on the root causes of the Ukraine crisis in particular (see previous blog). The meeting also showed that both sides are not ready to compromise on their respective views. Western states want to firmly uphold fundamental OSCE principles. They believe that the principles and commitments are not up for renegotiation – instead their implementation should be enhanced. The Russian Federation on the other hand continues to refer to the principle of non-intervention in its internal affairs.

Against this backdrop, achieving consensus among 57 states on a political declaration on the crisis in and around Ukraine was an impossible task – indeed negotiations on a draft declaration broke down at an early stage, as differences were so fundamental.

Panel of Eminent Persons and the Helsinki+40 Process

Nevertheless, the Swiss Chair made efforts to address the issue of “the crisis of European security” in other ways. The Swiss Chairmanship – in close cooperation with the incoming Serbian and German Chairs – took the initiative to launch a Panel of Eminent Persons during a working lunch with foreign ministers on 4 December. The Panel will be tasked with elaborating recommendations on how to reconsolidate European security as a “common project”. Although the Swiss Chair’s initiative of a Panel of Eminent Persons received broad support from participating States, a group of states continued to have reservations and doubts about its usefulness. One of the concerns is that such a Panel of Eminent Persons could distort the role of the OSCE Permanent Council as the main forum for political dialogue on European security.

The original aim of the Swiss Chair was to launch the Panel of Eminent Persons in the context of a consensus decision on the Helsinki+40 process (the OSCE reform discussion process). Instead, the Panel is now commissioned by the Swiss Chair only and the final draft on the Helsinki+40 process merely underlines the need “to continue to use the OSCE as a platform for addressing European security”. In any case, the Panel will start its work in the coming year. Ambassador Wolfgang Ischinger, an experienced German diplomat and Chairman of the Munich Security Conference, was appointed to chair the Panel and to act as “primus inter pares“. Details about the Panel’s composition and working methods will emerge at a later stage and are still under discussion. (Experiences with regard to previous Panels of Eminent Persons, such as the one in 2005, were mixed. Nevertheless, the Panel initiated byt the Swiss Chairmanship can help to intruduce fresh ideas on European security.)

OSCE as the main forum to address the crisis in Ukraine

In addition, the Ministerial Council clearly showed that there is agreement among all 57 participating States that the OSCE is the right forum to address European security in general and the Ukraine crisis in particular. As German Foreign Minister Frank-Walter Steinmeier rightly stated, “we must keep one thing in mind – a monologue plus a monologue does not produce a dialogue. That is why we need forums like this one in which we conduct a dialogue, especially on issues over which the participating states are divided.” At the MC meeting, participating states showed strong political will to strengthen the OSCE, use all its available tools to deal with the dividing lines and the Ukraine crisis, and to consolidate its role as a forum for dialogue between East and West. It should be remembered that this has not always been the case. Indeed, Switzerland at the beginning of its Chairmanship initiated a reflection process on the future role of the OSCE and on how the Organization’s identity crisis could be overcome. Today, only twelve months later, nobody questions the important role of the OSCE anymore and all 57 states are in full agreement that the Organization is much needed to help deescalate the crisis in Ukraine and discuss the future of European security. The fact that the MC meeting attracted a record 53 ministers and 1300 delegates to it proves this point. Most ministers spent little time in the plenary hall and instead used the opportunity for informal bilateral meetings, which took place behind closed doors and thus created a better atmosphere for genuine dialogue.

Participating States also reached consensus on decisions on Germany and Austria assuming the OSCE Chairmanships in 2016 and 2017, respectively. This offers a good opportunity for forward planning, coordination and cooperation among the incoming Chairs. Both states are strong supporters of the OSCE and believe in the Organization’s usefulness.

Decisions in all three dimensions

Furthermore, despite all the differences and the polarized atmosphere, there was enough common ground for participating States to adopt a series of decisions in all three OSCE security dimensions. Decisions on topical such as the return of foreign fighters and kidnapping for ransom were adopted. This showed that participating States are united in the fight against terrorism. In addition, participating States adopted decisions on the issues of fighting corruption and disaster risk reduction. The MC meeting also adopted a statement on the negotiations on the Transdniestrian Settlement Process in the “5+2″format, which adds impetus to the negotiation process during the coming year. Also, the Minsk Group Co-chairs issued a joint statement, committing themselves to a peaceful resolution of the Nagorno-Karabakh conflict.

Furthermore, a signing ceremony was held during the MC meeting as Bosnia and Herzegovina, Croatia, Montenegro and Serbia took ownership of regional arms control, as stipulated in the 1995 Dayton Peace Agreement.

As Didier Burkhalter, Swiss Foreign Minister and OSCE Chairperson-in-Office, recently wrote in an article for the European political newspaper ‘New Europe’, “the European security architecture is cracking.” To address this, he suggests that “[…] we need to talk. And the OSCE, with its inclusive membership, is the place to do so.”

The following is a list of the decisions adopted by the 21st MC meeting. A more thorough analysis of the deliberations, adopted decisions and drafts that failed to reach consensus will be published on this blog in the coming weeks. A detailed article will also appear in one of the upcoming issues of the ‘Security and Human Rights Journal’.