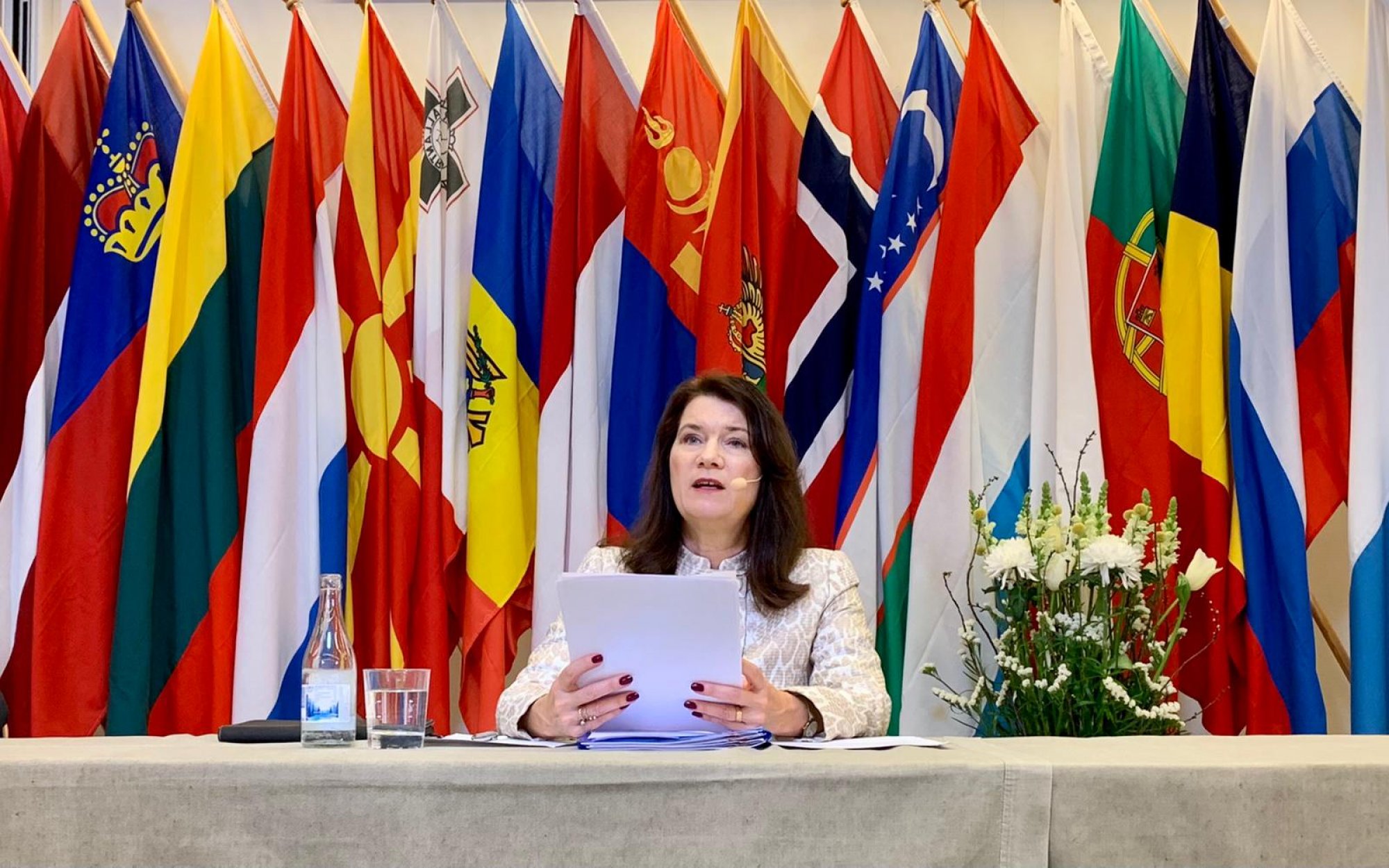 In an annual domestic security and defence policy speech in Sälen on January 11, Swedish Foreign Minister Ann Linde criticised the announcement by Parliament, at the initiative of the opposition, to state that Sweden has a NATO option.

This issue became the focus of domestic media attention during the conference. Sweden shares a tense relationship with Russia, and, as a result, it has moved closer to key NATO allies in defence cooperation programs. It is reestablishing Swedish defence through a 40% budget increase in coming years.

In combination with its strong focus on the UN, OSCE and the EU, this is the posture of the Swedish government. Besides assuming the OSCE Chair in 2021, Sweden was recently a non-permanent member of the UN Security Council and will take over the Presidency of the EU Council during the first half of 2023.

Therefore, it was no surprise that Linde devoted a significant portion of her speech at the Sälen conference to her country’s role as OSCE Chair for 2021, in which she stressed the importance of multilateralism—which obviously would include Russia. She described the OSCE as an organisation of central importance to Sweden, its neighbourhood and to Europe as a whole during a time when the European security order has been fundamentally challenged.

Sweden’s priority as Chair will be to defend the European security system and do everything possible to address both active and frozen conflicts in the region—from the Belarusian government’s crackdown on human rights to conflicts in Nagorno-Karabakh, Ukraine and Georgia—despite the difficult conditions and the requirement for consensus to make decisions.

A feminist-oriented foreign policy and a commitment to democracy will define what Sweden does. There are crises in Sweden’s immediate neighborhood; there are also consequences when States break their commitments. The crisis in Belarus is a clear illustration, as are the conflicts in Nagorno-Karabakh and Ukraine, in addition to the territorial disputes in Georgia.

Limitations to the role of the OSCE Chair

A Social Democrat, Linde is a seasoned former Europe Minister and Minister of Trade with a background in the defence ministry. Beyond clearly expressing the divergence of views with Russia, she has declared that she will speak the language of the OSCE Chair—meaning what she will say on Belarus, for example, may not be the same rhetoric she would use in her capacity as a national leader, or as a member of the EU.

The main thrust of Linde’s work with new Secretary General Helga Schmid will focus on protecting the OSCE’s core principles—and the freedom of action built into the work of the OSCE Institutions. This is not a small endeavour in the current situation, when individual States freely wield their veto power inter alia to curtail the participation of civil society in the work of the Organisation.

It is also significant that Sweden will need to work closely with Poland, the incoming OSCE Chair for 2022, which will similarity need to deemphasize certain national priorities during its tenure, whether in human rights, democracy and the rule of law, or Polish-Russian relations.

Apart from the global pandemic, the outlook for 2021 is also complicated by the fact that several key participating States are in transition—most notably the United States, with the new Biden administration; Germany, which expects a successor to longtime Chancellor Angela Merkel in September; and a post-Brexit U.K.

In all three contexts, we are likely to see new personalities have considerable influence on their countries’ trajectories, though it will take time. This not only limits what the Swedish Chair can hope to achieve ahead of the Stockholm OSCE Ministerial Council meeting in December, but it also requires caution when it comes to defining priorities.

In the Swedish case, this means a defensive posture in terms of safeguarding the OSCE’s overall commitments and the continued functioning of its Institutions, in addition to the right of civil society to continue to playing a role in its operation. It also means a focus on conflicts to better manage and resolve them, not least in South Caucasus, where former Deputy Minister Annika Söder has been appointed special representative.

Difficulties in the politico-military dimension

From a Swedish national perspective, it would be particularly useful if the OSCE’s work led to more stable relations with Russia.

Room for movement, however, is limited within the politico-military domain, where Swedish Ambassador to the OSCE Ulrika Funered has recent experience as Chair of the Forum for Security Cooperation and the Open Skies Consultative Commission. (The Treaty is under pressure since the US withdrew from it in November 2020 and Russia is now considering doing the same). When seeking to reduce the risk of military escalation in the OSCE region, finding a way out of the pattern of action and reaction remains extremely complex. But it is also vital from an international security perspective, which is why a contextual analysis is particularly important when it comes to addressing the politico-military challenges.

During the last OSCE Summit in Astana in 2010, negotiations proceeded in parallel with discussions on the New START treaty between the United States and Russia. This drew attention by the two parties away from the agreement to be reached on the reaffirmation of the OSCE acquis. The fact that participating States succeeded in reaffirming the entire OSCE body of commitments in 2010 was therefore to no small extent the result of a firm and unified EU position.

This year, the already complex U.S.-Russia-China strategic context also includes the historic challenges represented by the New START treaty, the Iran nuclear deal and the Paris agreement. This will colour much of what happens in the OSCE. On the European level, there are significant domestic differences over OSCE principles, while at the same time the importance of a strong EU in support of the OSCE is greater than ever.

This year also marks the 10-year anniversary of the 2011 Vienna Document on Confidence- and Security-Building Measures, as well as the 2011 Ministerial Decision on Elements of the Conflict Cycle, adopted at the OSCE Ministerial Council meeting in Vilnius. There is no lack of proposals how to move forward and build on them.

The European Leadership Network (ELN) recently put forward a long list of recommendations, including Confidence- and Security-Building Mearures (CSBMs) and proposals relevant to the Treaty on Conventional Armed Forces in Europe (CFE), aimed at reducing the risk of war both on the nuclear and conventional levels with prominent participation from the United States, Western Europe and Russia.

Realising even some of these proposals would mean constraints on forward deployments and military activities. That would follow the initial wave of CSCE/OSCE arms control proposals that emerged from the end of the Cold War. But it would also be contrary to calls for more forward deployment both in the East and the West, as well as more freedom of movement in terms of military exercises.

Some believe that such agreements will be necessary for the Biden administration in order to focus more on China and Asia. Others express strong concern that this could mean freezing the issue of Russia’s illegal annexation of Crimea, as well as put limits on NATO’s efforts to strengthen deterrence through modernisation and military forward deployment. A serious concern in this context—also expressed by some in Sweden who favour Swedish NATO membership—is whether risk reduction may mean appeasement by accepting a Russian sphere of influence in the East. Or, for that matter, continued Russian destabilisation of Western domestic politics.

Returning to principles represented by the CFE Treaty, the Open Skies Treaty and the 2011 Vienna Document is not a new discussion, but one which has run parallel to deterrence-focused conferences for a number of years. The proposals are also not new; the question is whether the prospects for progress are greater now.

The challenge is to identify a starting point. At the end of the Cold War, progress initially was nearly invisible and took shape only through procedural agreements and technical discussions. This time, similarly, it may be years before we see any tangible progress.

The general consensus seems to be that the so-called Structured Dialogue initiated by the German OSCE Chair in 2016 has encountered serious difficulties, mainly because of what the Swedish representative to the dialogue, Fredrik Löjdquist, has described as the “overall normative divergence” in the OSCE following the initial convergence in the years following the Cold War. The author has also explored this and related perspectives of Swedish experts in a recent series of podcasts.

Sweden will make efforts to promote high-level military dialogue, at the very least, throughout the year—but will do so from the perspective of cautious optimism.

It is also important to note that ELN signatories include names of people who were young at the end of the Cold War and who were able to find new ways to negotiate CSBMs with the Soviet Union. This required seeing a Western interest in not only the third basket (the human dimension), but also the first basket (focused on politico-military issues) of the CSCE.

Clearly, an engaged younger generation will need to think outside the box once again.

Dr. Lars-Erik Lundin is a SIPRI Distinguished Associate Fellow and a member of the board of the Swedish OSCE NGO Network. He moderates the Friends of the OSCE group on Facebook and has produced a large number of podcasts and articles on the OSCE, which can be found here. He has been active in OSCE negotiations as a diplomat since the early 80’s, including as EU Ambassador to the OSCE. He is Vice Chair of the security policy section of the Royal Swedish Academy of War Sciences.