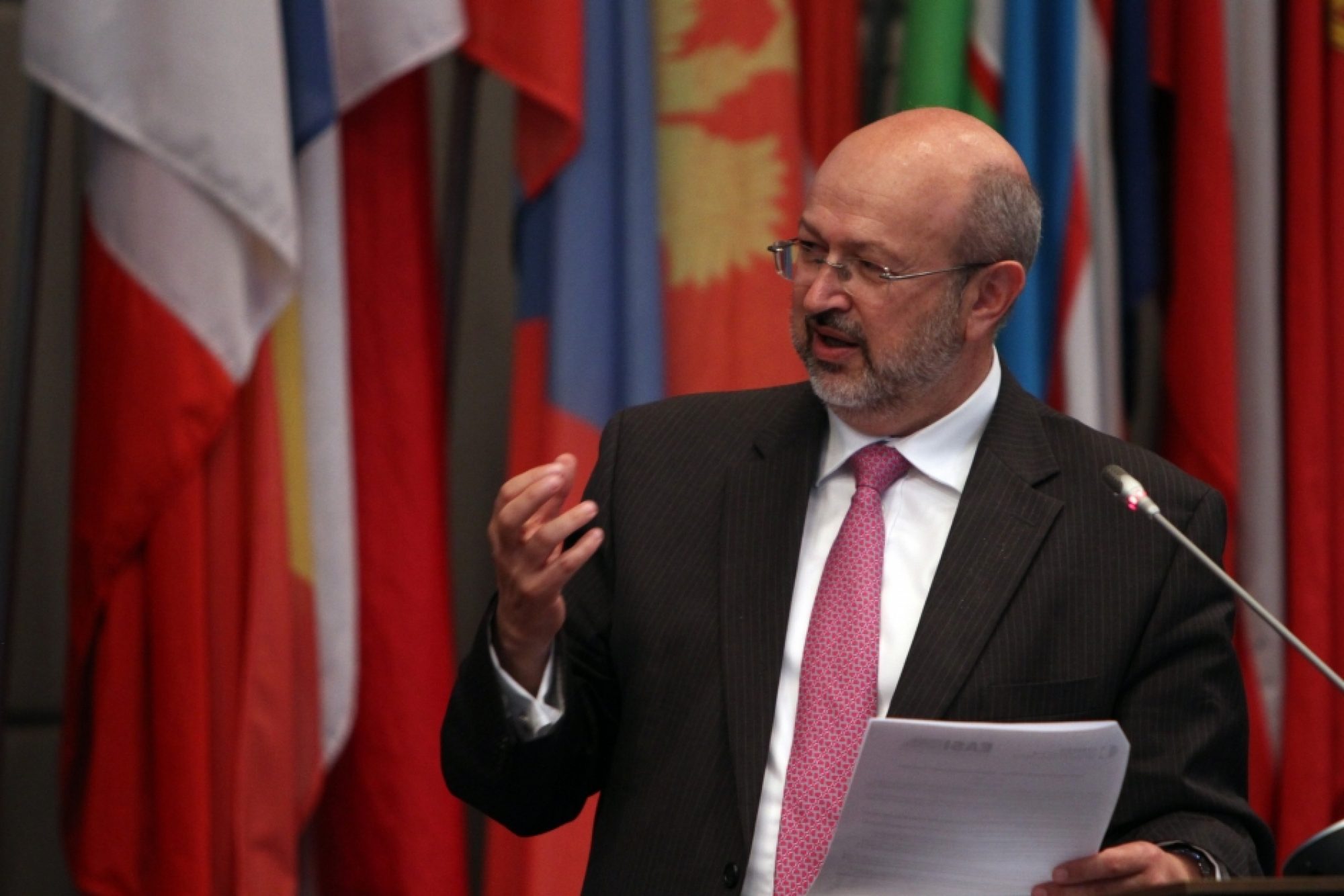 Ukraine a game-changer for the future of European security? The OSCE’s role as a regional arrangement of the United Nations

On 27 May, the OSCE hosted a Security Day Conference on the topic of “the OSCE and Chapter VIII of the United Nations Charter: Confronting Emerging Security Challenges in the Euro-Atlantic and Eurasian Space.” This latest event is part of a series of Security Day Conferences that look at how security can be improved in the OSCE area and beyond from multiple perspectives, involving multiple stakeholders. The events represent a considerable effort by the OSCE to ensure more transparency, to open up to a wider audience and include ideas not only from government representatives but also from researchers, academics and NGO representatives. The aim of the conference was to engage high-level panelists and a wide audience (including people following the conference via the live stream and social media) in a debate on how the OSCE can best support the UN as a regional arrangement in the current security context. The conference focused on the Organization’s role in the areas of conflict prevention (early warning and early action) and conflict resolution (mediation), also taking into account the current crisis in Ukraine.

The following main issues as well as related recommendations emerged from the debate:

Cooperation between the OSCE and the United Nations (UN): Chapter VIII of the UN Charter encourages regional arrangements such as the OSCE to support the UN in the “maintenance of international peace and security.” Article 52 of Chapter VIII calls on “[m]embers of the United Nations entering into such arrangements or constituting such agencies [to] make every effort to achieve pacific settlement of local disputes through such regional arrangements or by such regional agencies before referring them to the Security Council.” Many conference participants stressed that today’s security challenges highlight the need for the OSCE and the UN to cooperate more closely. Competition between the two organizations should be avoided. Instead, each Organization should focus on what it can do best and concentrate on creating synergies. For example, the OSCE and the UN have established regular contacts at headquarter level but also in the field, especially in South Eastern Europe and the Caucasus.

The OSCE and the Ukraine crisis: Many speakers expressed the opinion that the OSCE is the right forum to address the current crisis in Ukraine. They stated that the Ukraine crisis should be seen as a defining moment for the future of the OSCE and European security as a whole. Secretary General (SG) Lamberto Zannier questioned whether the crisis would become a “game-changer for the future of European security.” Another speaker called it the “golden moment and window of opportunity” for the OSCE to prove its role. In this context, Danilo Türk, Former President of the Republic of Slovenia, noted that “even at the height of the Cold War it was possible to build bridges and therefore this should not be impossible today.” Support was expressed for the Swiss OSCE Chairmanship’s roadmap to deescalate the Ukraine crisis. Speakers also took positive note of the close cooperation that has been established between the OSCE Special Monitoring Mission and the UN on the ground in Ukraine.

The OSCE’s role in conflict resolution and mediation: Panelists underlined the need for mediation and peace negotiations to be as inclusive as possible in order to ensure the sustainability of political agreements. This means that not only traditional players should be represented at the negotiation table but also other parts of society such as women and youth. In this context, H.E. Erkki Tuomioja, Minister of Foreign Affairs of Finland, stressed that “mediation will only succeed if women are empowered to participate fully.” One speaker also stressed the fact that mediation should never be imposed. Concerning the Ukraine crisis, the OSCE Special Monitoring Mission was cited as a useful conflict resolution tool, as part of its mandate is to “facilitate the dialogue on the ground in order to reduce tensions and promote normalization of the situation”. In this context, it was suggested that the reports of the mission should receive full attention from capitals.

The OSCE’s role in conflict prevention and early warning/early action: In general, speakers agreed that in order to maintain peace and security it is necessary to move from a “culture of reaction to a culture of prevention.” The OSCE has a number of conflict prevention tools at its disposal, one of them being the OSCE High Commissioner on National Minorities (HCNM). The 1992 mandate of the HCNM stipulates that the HCNM “will provide early warning and, as appropriate, early action at the earliest possible stage in regard to tensions involving national minority issues […]”. In this context, H.E. Ambassador Knut Vollebaek from the International Commission on Missing Persons and former OSCE HCNM underlined that although states had been provided with sufficient information and early warning prior to the escalation of the Ukraine crisis, there was lack of political will to use the OSCE to address the crisis. In addition, the OSCE’s early action capabilities are often hindered by lengthy negotiations due to the consensus rule. For example, the deployment of the Special Monitoring Mission could only take place once agreement had been reached by all 57 OSCE participating States. (Yet, the OSCE was able to deploy an advance team of the mission within 24 hours after agreement). In this context, Ambassador Fred Tanner, Senior Adviser and Liaison to the Swiss Chairmanship underlined the importance of Ministerial Council decision 3/11, which empowers the OSCE SG to take early action without the consensus of all 57 states. However, he added that the implementation of this decision is difficult due to a lack of resources. He called on OSCE participating States to address this issue. The focus on zero nominal growth in the OSCE budget is not useful. If the OSCE wants to have a significant role in early action and conflict prevention as well as other areas of activity, more resources are needed.

Helsinki+40 process: It was stressed that the process urgently needs political impetus as well as the attention of capitals. The process was originally designed with slightly different goals in mind; today the process needs to be adapted to also address the Ukraine crisis and to define the role of the OSCE in this new security environment.

Recommendations by the EASI Next Generation Network: Members of the Next Generation Euro-Atlantic Security Initiative (EASI) – sponsored by the Carnegie Endowment for International Peace – presented recommendations on how the Euro-Atlantic region can be transformed into a more “secure, inclusive and cooperative space.” With regard to the OSCE, the Next Generation EASI members, inter alia, advise that governments should engage in extensive strategic foresight exercises and in this context they suggest that a policy unit on strategic foresight could be created in the OSCE Secretariat. EASI member also recommend that special attention should be paid to trust and reconciliation in the OSCE area and that for this purpose an OSCE special representative should be appointed.

In conclusion, the Security Day Conference provided a good opportunity to listen to the views of a wide range of actors on the current security challenges in the Euro-Atlantic and Eurasian space and to gather recommendations on how the OSCE fits in and can best support the UN as a regional arrangement. One of the main conclusions that one can draw after listening to the debate is that the Ukraine crisis provides a challenge and opportunity at the same time for the OSCE. The crisis has changed the parameters of the “security game” and states have to show solid political will to use the OSCE to address the crisis and provide the Organization with the necessary resources.