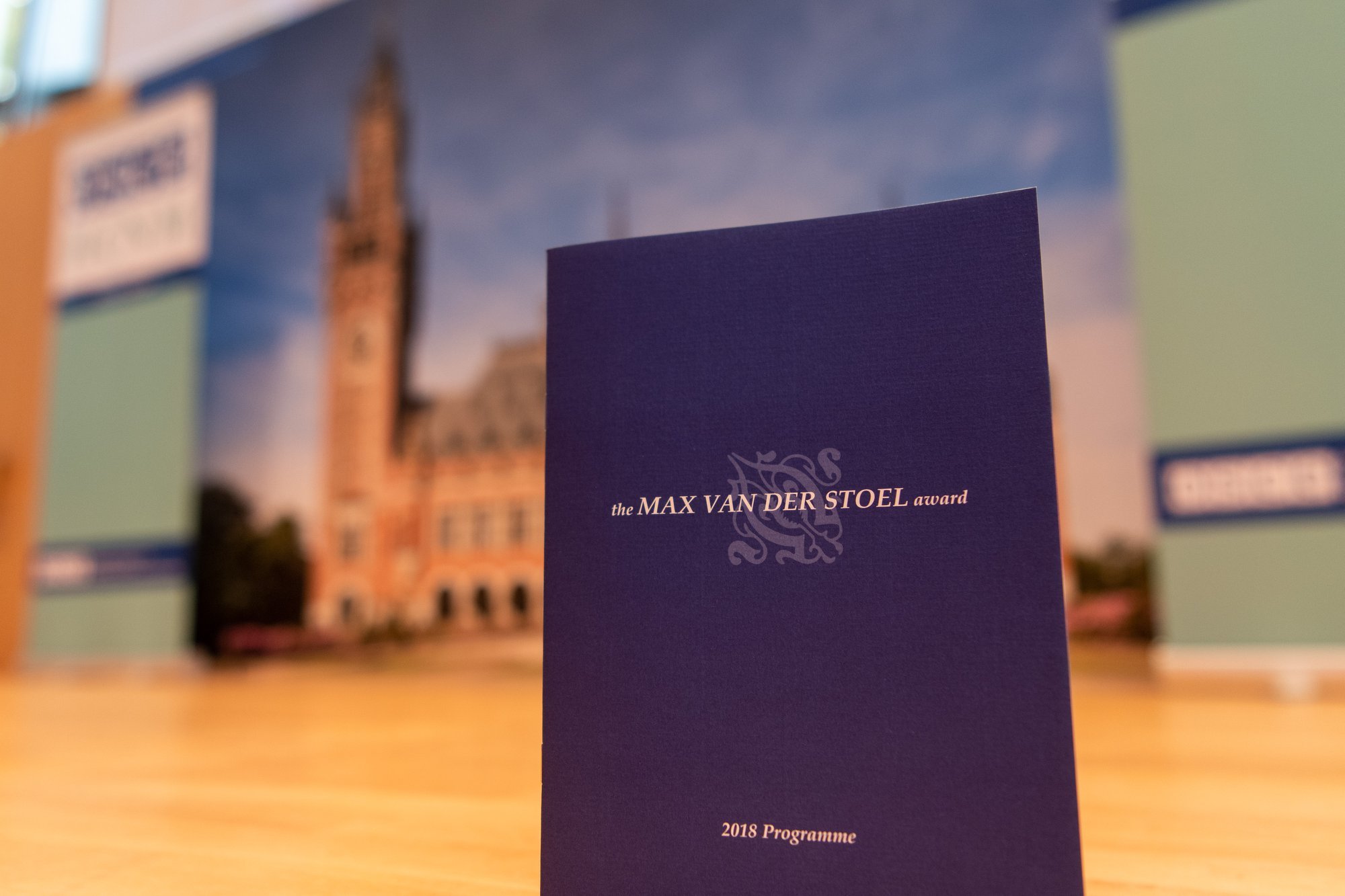 High school students from Jajce in Bosnia and Herzegovina were presented with the 2018 Max van der Stoel Award on 9 November in The Hague. In addition to the award ceremony, the event also commemorated the 25th anniversary of the OSCE Office of the High Commissioner on National Minorities (HCNM) with a photo exhibition.

“Diversity is not something to be feared but to be celebrated,” said OSCE Secretary General Thomas Greminger. That sentiment ideally captured the feeling surrounding the event. Indeed, it was this dedication to diversity while maintaining unity in school that inspired the jury panel’s unanimous decision to honour the Jajce high school students for their fight against segregation of their school. “These high school students demonstrated great tenacity in their belief in an educational system that promotes diversity,” said Lamberto Zannier, OSCE High Commissioner on National Minorities, representing the jury panel.

“We got into this fight with our hearts and souls, we knew from the beginning that we were right so we believed that success was guaranteed, the question was only when,” said Azra Keljalić during her acceptance speech on behalf of all the recipients. Keljalić also expressed her happiness that the upcoming generation of students remain committed to their values [of unity] and shared a message of hope for them that, “even a small group of secondary students are able to achieve things no one believed they could.”

Dutch Foreign Minister Stef Blok presented the award to the students. During his speech, he highlighted the fact that there are “very few countries that haven’t experienced first-hand the destruction of war” and commended the students’ action in contributing to reconciliation. “When confronted with such a legacy, what small things can [one] do to make reconciliation possible? – That’s exactly what these students did,” said Blok.

The event also commemorated the 25th anniversary of the office of HCNM. Greminger highlighted the establishment of the office as one of the “most important and most innovative mandates OSCE participating States have ever adopted,” noting that it was both “an institution of its time” and “ahead of its time, promoting integration, and highlighting structural prevention.”

During the event, the HCNM also presented the exhibition commemorating the 25th anniversary, opening this week in The Hague. In his opening remarks Zannier, described it as “a quarter of a century of quiet but successful conflict prevention” and welcomed the opportunity to showcase some of the office’s work throughout the years, which often takes place “behind closed doors.”

Looking towards the future of the office, Timmermans described what he sees as the return of ideological conflict in Europe and the rest of the world. The conflict, he described, is between those who harbour fear and isolationist policies (described by him as having a nationalist ideology) against those who seek solutions together. He called for the reinterpretation of the mandate of the HCNM to “also look into the potential of conflicts generating on the basis of this new political ideological confrontation.”

The HCNM and the Dutch Foreign Ministry co-sponsor the Max van der Stoel Award, presented every two years. It recognizes extraordinary and outstanding achievements in improving the position of national minorities across the OSCE countries. The event was hosted by the HCNM and took place at the Peace Palace in The Hague.

The exhibition titled, OSCE High Commissioner on National Minorities: 25 years of conflict prevention will take place in The Hague between 12 November and 1 December 2018.