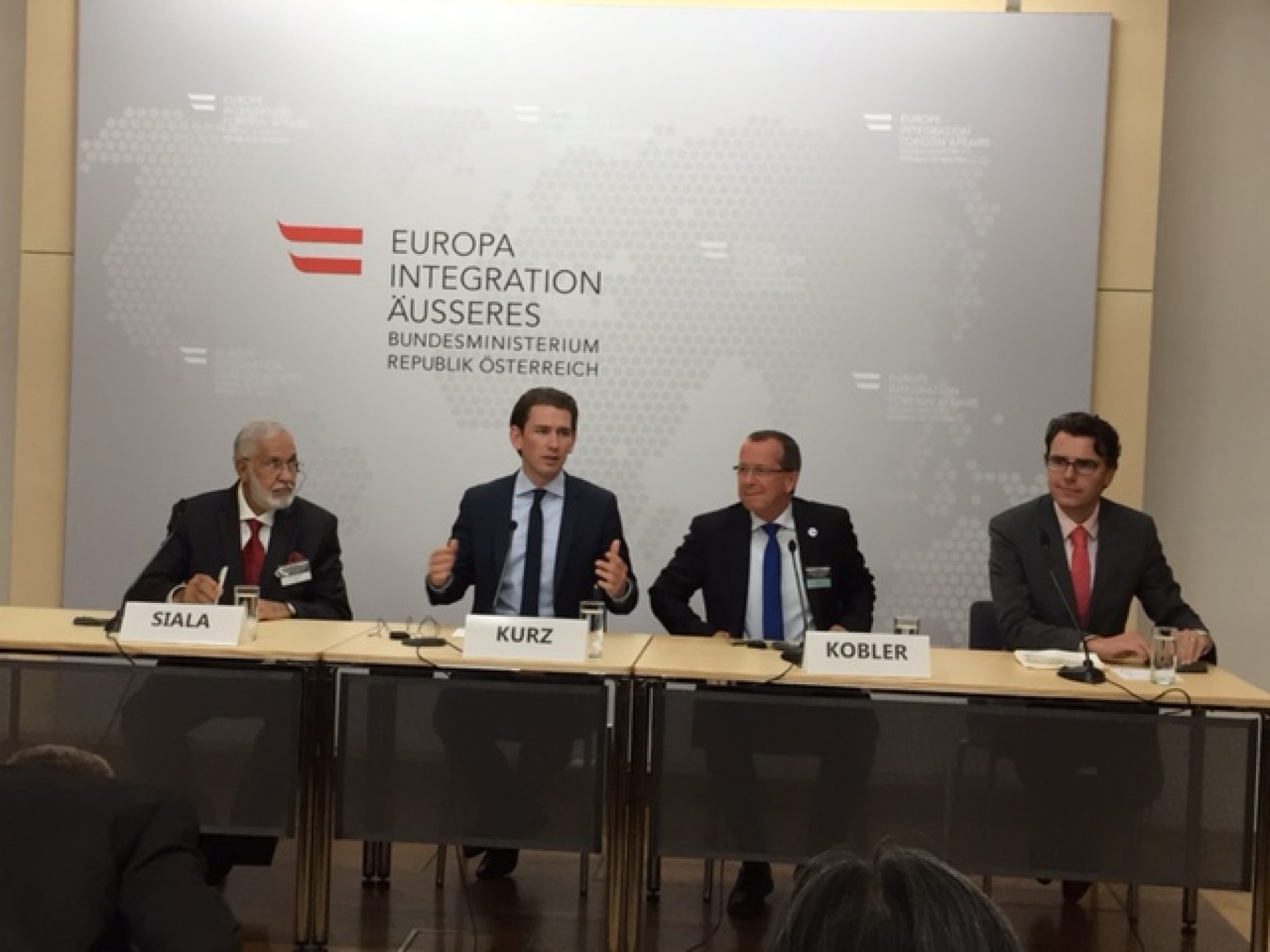 The topic of the conference was very timely, given the pressing security challenges that have an impact both north and south of the Mediterranean, which include terrorism, migration, violent extremism and radicalization, especially among youth. The conference provided a good platform for dialogue and an opportunity to exchange best practices and lessons learned on the most pressing topics.

Given Libya’s important role in all of the above, especially regarding managing migration flows towards Europe, Austrian Foreign Minister Sebastian Kurz took the initiative to invite Mr. Mohammed Taher Siala, Libya’s Foreign Minister of the Government of National Accord, to the high-level conference.

Two important issues emerged in the course of the conference.

At the OSCE Mediterranean Conference, Libya reiterated its interest in joining the OSCE Partnership for Cooperation. While in the past Libya has taken part in meetings of the Conference on Security and Cooperation in Europe (CSCE), it eventually pulled out and never formally joined the OSCE Partnership for Cooperation. Yet, in recent years Libya repeatedly expressed an interested in becoming an OSCE Partner. Most recently, Libya handed in an official application to the OSCE Secretary General in June 2013. However, at the time, no consensus could be found among the 57 OSCE participating States. Hence, the German Chairmanship should test the ground to reevaluate whether political circumstances have become more favorable. This issue should be followed up by next year’s Austrian OSCE Chairmanship.

That said, Libya’s expression of interest again raises the long unresolved question of what criteria are used to decide if a country can become a Partner for Cooperation. This issue has been discussed here before. Potential new Partners for Co-operation have to make a formal request to the OSCE Chairmanship, which in turn initiates an internal consultation process among the OSCE’s 57 participating States. During this process, several factors are taken into consideration, such as “the existing close relations between the applicant and the OSCE; sharing of the OSCE’s principles, values and objectives; commonality of security interests; intention to participate actively in the Organization’s work and the value of the partnership to the OSCE.” These factors are “neither exclusive nor cumulative” but they “reflect the idea of affinity that guides each decision to welcome a new Partner for Co-operation.” These loose and informal criteria are listed in an OSCE factsheet but there is no official consensus document that stipulates clear criteria.

In the case of Libya, it is obvious that there is strong commonality of security interests, especially regarding the issues of migration and fighting terrorism. What is more problematic is the fragmented nature of the Libyan state. The Government of National Accord effectively only controls the western part of the country, including the capital Tripoli. The eastern part of Libya still has a rival government in Tobruk and various armed militias still control various parts of the country. In addition, the so-called Islamic State, although weakened, still holds some ground, mainly around the city of Sirte. While granting Libya Partnership Status in the OSCE could help to strengthen the Government of National Accord, there is also a risk involved, in case that government collapses and a rival government takes over that is not recognized by the international community.

Nevertheless, there is consensus among participating States that “the security of the OSCE area is inextricably linked to that of its neighbors”, a mantra that is repeated in virtually every OSCE consensus document since the 1975 Helsinki Final Act. In this sense, the eventual inclusion of Libya in the OSCE Partnership for Cooperation should be seen as an opportunity to address common security issues, such as fighting terrorism and managing migration flows.

2. A Turkey-type deal between the EU and Libya on returning migrants seems unlikely in the near future

The common security issue of migration featured high on the agenda of the OSCE Mediterranean Conference, with the intention of highlighting the push and pull factors for young people south of the Mediterranean and discussing the integration of migrants and refugees into host societies.

However, the conference was somewhat turned into a forum to discuss a possible deal between the EU and Libya, similar to the one which had been struck between the EU and Turkey in March. One reason for this was the fact that the issue of managing migration flows is of particular importance to many EU countries, given the increase in refugees and migrants arriving in Europe from Libya via the Mediterranean Sea, after the closing of the Balkan route.

Libya is a transit country for many migrants and refugees from African countries such as Nigeria, Eritrea, Somalia and Sudan, and has become a key gateway for many refugees and migrants to reach Europe via the Mediterranean Sea. This year alone roughly 140,000 people reached Italy from Libya and 3,500 people drowned in the Mediterranean Sea so far.

Several EU countries, among them Austria, had hoped that a deal could be reached with Libya to send back refugees and migrants, who have been rescued in the Mediterranean Sea, to camps in Libya. Speaking at the OSCE Mediterranean Conference, Libyan Foreign Minister Siala stated that this would mean that “the EU is refusing to assume responsibility and is instead placing it on our shoulders”. At a joint press conference with Austrian Foreign Minister Kurz and UN Special Representative for Libya Martin Kobler, Foreign Minister Siala suggested that instead, job opportunities in countries of origin should be improved, and the EU should help by exerting pressure on countries of origin to take back migrants. Libya would only take back those migrants that could provide the necessary documents, such as Libyan visas, Siala specified.

In any case, the fragmented nature of the Libyan state, the political instability and the volatile security situation in the country raise serious questions as to whether it would be advisable for the EU to return migrants and refugees to camps in Libya, even if built and paid for by the EU.