SHRM Editorial Board member Ambassador Herman Schaper passed away November 30 in The Hague at the age of 72. 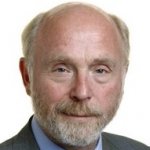 If anyone lived the process of European security and integration over the last 40 years, it was Ambassador Schaper. Educated as a historian in Leiden (cum laude) he joined the Netherlands Ministry of Foreign Affairs in 1980. In the early nineties, he was closely involved in the negotiation of the Maastricht Treaty, and in the years thereafter he had an important role in steering Dutch policy through those turbulent times as Director for Europe at the Foreign Ministry. A few years later he had a similar influence as Director for International Security. He crowned his MFA career as Netherlands Permanent Representative to NATO (2005-2009) and subsequently as the Netherlands Permanent Representative to the United Nations in New York (2009-2013).

Herman Schaper’s career spanned well beyond his work at the MFA. At a very young age, he was already a member of the Second Chamber of Parliament for D66 in 1981/1982, worked at the Netherlands Institute for International Affairs Clingendael from 1985 to 1987, and was a member of the First Chamber of Parliament (Senate) from 2015 to 2019. After his retirement from the Foreign Service, he returned to Leiden University where he held the Pieter Kooijmans Chair in Peace, Law and Security from 2014 until 2017.

He joined the Board of the Security and Human Rights Monitor in 2015, in addition to his academic and other activities.

His editorship constituted an important strengthening of our editorial ranks, since Ambassador Schaper was not only well-known for his diplomatic skills, but also for his great interest in scholarly analysis of international relations, including of the OSCE process in all its dimensions. He strongly enjoyed discussions on strategic political issues and reporting about it; and with that same energy and creativity he actively contributed to the discussions about the editorial policy of the SHR journal in more recent times.

Ambassador Schaper was an astute and original thinker and he had the gift of a good pen. His intellect and his charm will be sorely missed by us all.

With deepest sympathies to his widow and family,

The SHRM Editorial Board