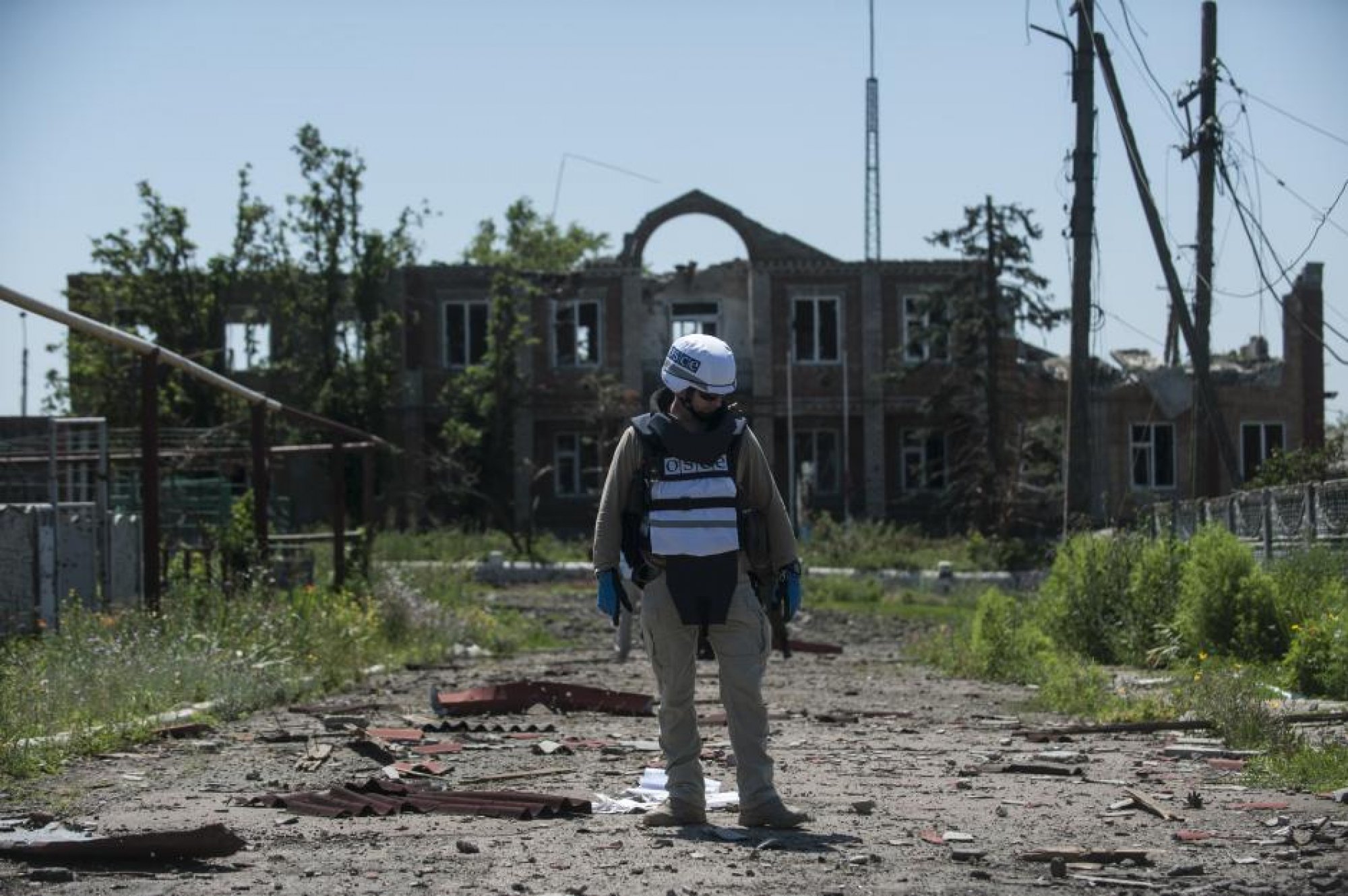 As the coronavirus pandemic spreads, even war zones and conflict areas are affected. In some conflict areas, the spread of the virus leads to more volatility and adds to the already existing security concerns. In others, it may lead to a temporary cessation of fighting, as called for by UN Secretary General Antonio Guterres.

When it comes to the conflict in eastern Ukraine, British researcher Thomas de Waal believes that the regions of Donetsk and Luhansk (the so-called “non-government-controlled areas” in eastern Ukraine) “have a cocktail of three problems that makes them especially susceptible to the worst effects of the pandemic”, including a bad health care system, many old people and weak governance.

But what has largely been overlooked is the fact that the spread of COVID-19 also seems to be exacerbating the already difficult situation of international monitors of the OSCE Special Monitoring Mission (SMM) in eastern Ukraine.

The SMM observes and reports on ceasefire violations and other developments in eastern Ukraine, where the conflict between Russian-backed rebels and Ukrainian government troops has been ongoing for six years, claiming the lives of 13,000 people.

According to twelve separate Mission reports, since 21 March, “members of the armed formations” on numerous occasions, continued to “restrict the SMM’s freedom of movement across the contact line, thus impeding the implementation of its mandate throughout the country”.

In reacting to this, OSCE Chairperson-in-Office Albanian Prime Minister and Minister for Foreign Affairs Edi Rama and OSCE Secretary General Thomas Greminger issued a joint statement on 23 March in which they expressed their “deep concern”, and called for “urgent steps to ensure the safety of SMM staff”. They also underlined the need for the SMM to be able to “continue to operate, while taking into account the need to control the spread of COVID-19”.

Indeed, the restrictions of the SMM’s freedom of movement run counter to the Mission’s mandate, according to which the OSCE observes should be given “safe and secure access throughout Ukraine”.

As of 21 March, the Mission began facing repeated denials when attempting to cross into “non-government-controlled areas” at checkpoints in the regions of Donetsk and Luhansk. Members of the armed formations cited “quarantine restrictions due to COVID-19”, or “new rules concerning virus protocols” but also simply “orders from commanders”.

The restrictions on freedom of movement not only concern the SMM’s movement across the front line (or contact line) but also to a certain degree within non-government-controlled area between the Donetsk and Luhansk regions, for example on 30 March.

There is a good case to believe that the restrictions will have a negative impact on the ability of the SMM to operate effectively. Without proper access for a prolonged period of time, the SMM will lose its ability to observe developments on the ground properly and to report on them in an impartial way.

The SMM is a key international actor in the region since it reports on ceasefire violations, observes the presence or removal of military hardware from the conflict zone, and reports on the military disengagement. The Mission’s reports are an important source of information for media, but also for politicians who need to take decisions.

“The restrictions on freedom of movement for the SMM are indeed very serious,” the OSCE Secretary General Thomas Greminger told the SHR Monitor. “While the SMM is still able to observe and report on developments in eastern Ukraine, in the short/mid-term things could become more difficult. This is due to the fact that we will soon have to start with routine replacements of monitors in the patrol hubs, and have to move equipment across the contact line. This could be made more difficult because of COVID-related restrictions.”

In addition to the work of the 750 civilian monitors, the OSCE SMM also uses technology, such as cameras and unmanned aerial vehicles (UAVs), to observe the situation on the ground in the conflict zone. This could help compensate some of the potential personnel shortages in the future. According to the SMM, the Mission is currently “adjusting the operational posture of teams”. “In this regard, technical means, in particular unmanned aerial vehicles and cameras are being highly utilized,” the Mission specified in a response to the SHR Monitor.

However, it is important to note that the SMM has also experienced jamming and shooting down of UAVs as well as damaging of cameras on repeated occasions in the past. So, this option also has its limits.

Furthermore, if the restrictions on freedom of movement continue, this could also have a dramatic impact on the SMM’s ability to facilitate local ceasefires that enable the repair and functioning of civilian infrastructure.

For example, the Mission has been facilitating the operation of the Donetsk filtration station, which provides water to approximately 600,000 people on both sides of the contact line. Through so-called mirror patrols, employees are safe to go to work without coming under small arms fire, and the station can continue to function and supply water.

“Stakes are very high when it comes to the SMM’s work on facilitating the functioning and repair of critical infrastructure, including repair of water infrastructure, power infrastructure, and maintenance of, for example, railway tracks,” Greminger said. “Without the ability of the SMM to access these areas and move around freely, these important humanitarian activities could be jeopardized in the midterm.”

Ukraine has 4,662 confirmed cases of COVID-19 within its borders, including 125 deaths, according to official sources. So far the country has done very little testing of its large population. Hence, “taking the fight against COVID-19 in Ukraine seriously is very important”, one source indicated, however, the OSCE SMM should be given free passage as it should be considered “an emergency or humanitarian actor, similar to the police, fire brigade or ambulances”, the source who wishes to remain anonymous told SHR Monitor.

Another diplomat based in Ukraine told SHR Monitor that in his view the current restrictions in eastern Ukraine and elsewhere in the country were part of a “genuine effort to help contain the spread of COVID-19”. However, the diplomat also emphasised the importance of regulations that should “permit free passage for humanitarian actors, including the SMM”.

Apart from restrictions on freedom of movement, the SMM itself is also affected by the coronavirus pandemic. According to the SMM, “the coronavirus contingency planning requires the Mission to balance between the SMM’s mandate implementation and duty of care of mission members. The Mission is implementing all procedures in line with the Ukrainian regulations during the COVID-19 crisis and best international practice.”

For example, the SMM is adhering to social distancing rules, has introduced daily temperature checks, uses face masks and is minimizing the number of people in vehicles while on patrol.

According to two sources, OSCE observers have also been given the option of repatriating, but so far only around one fifth of all monitors have indicated a wish to leave Ukraine. Some are also teleworking. While this could mean that around 150 monitors could leave the Mission temporarily, it remains to be seen whether this will actually have a negative impact on the daily functioning of the SMM.

In any case, it will be critical that the remaining OSCE monitors will have free access throughout Ukraine in order to fulfil their important function.