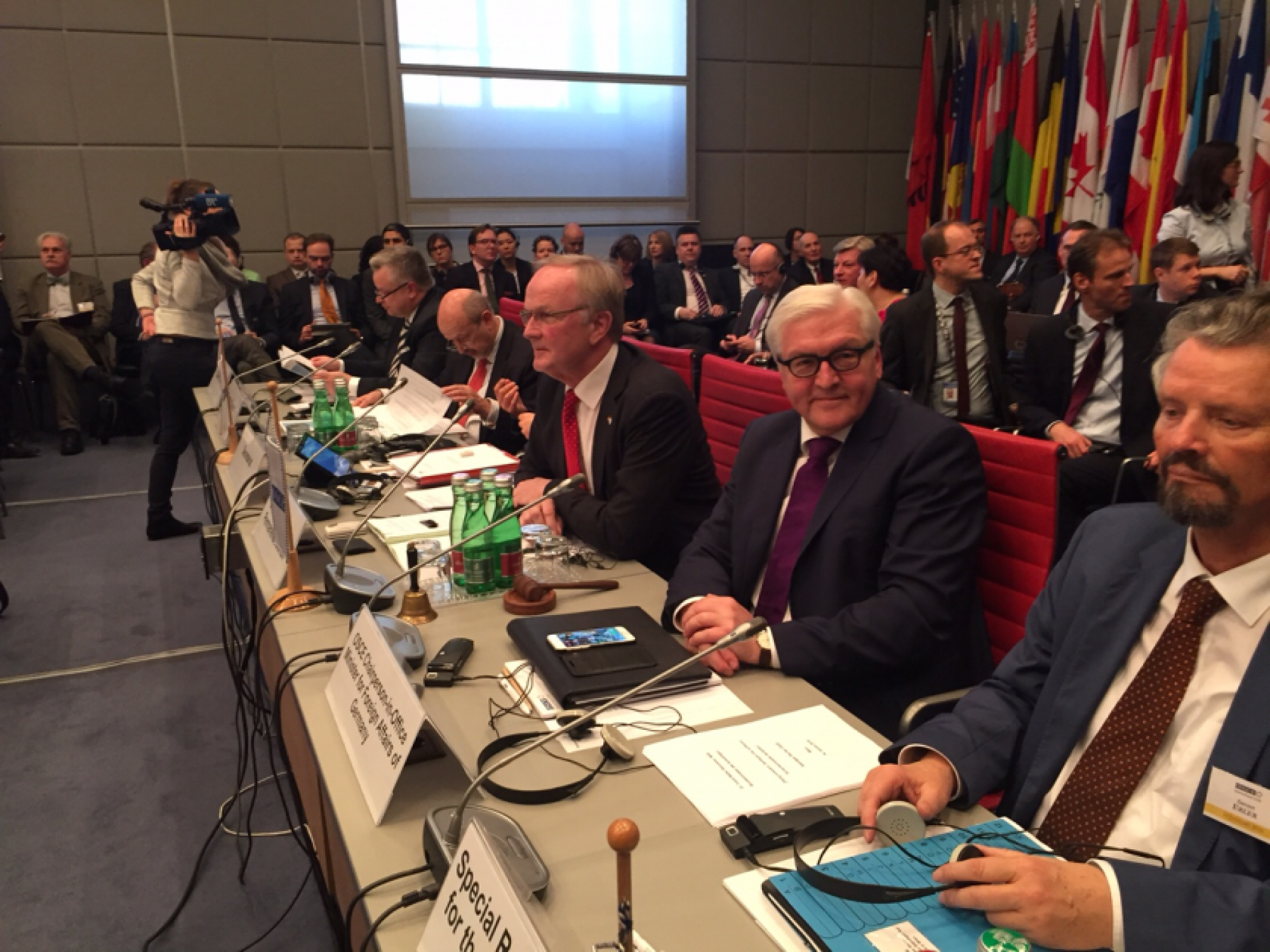 On 14 January, German Foreign Minister and OSCE Chairperson-in-Office, Frank-Walter Steinmeier, presented the priorities of the German OSCE Chairmanship to OSCE delegations in Vienna. The address by the new OSCE Chairperson-in-Office (CiO) to the OSCE Permanent Council at the beginning of the year is an annual event. This year, the Permanent Council meeting room was packed with journalists, diplomats and high-ranking officials who eagerly awaited OSCE CiO Steinmeier’s inaugural speech. Among them was Ukrainian Foreign Minister Pavlov Klimkin, who – through his attendance – underscored the important role of the OSCE in the management of the Ukraine crisis. Indeed, one could sense that a “political heavyweight” was taking over the Chairmanship, as Germany is “by far the most powerful OSCE participating State that has ever held the presidency of the organization”.[1] In this article, it will be argued that Germany should use its OSCE Chairmanship to offset the weaknesses of the EU and NATO in dealing with the Ukraine crisis. In its capacity as OSCE Chair, Germany presides over an organization with a broad membership and in which Russia is an equal partner, as decisions in the OSCE are taken by consensus. Germany can thus deal with Moscow in a more balanced way, not overshadowed by EU sanctions or military rhetoric. This may open new possibilities to ease tensions.

Under the motto “Renewing Dialogue, Rebuilding Trust, Restoring Security”, OSCE CiO Steinmeier outlined five priority areas of the German OSCE Chairmanship. Firstly, Germany will use the OSCE to further deescalate and defuse the crisis in Ukraine. In this context, CiO Steinmeier underlined the importance of implementing the Minsk Agreements as well as the role of the Trilateral Contact Group under the leadership of the Austrian diplomat Martin Sajdik. He also thanked all members of the OSCE Special Monitoring Mission to Ukraine for their commitment and work under sometimes “harsh and dangerous conditions”. In addition to defusing tensions in Ukraine, Germany will also continue the OSCE’s long standing work on finding lasting solutions to the so-called protracted conflicts in the OSCE area, including Transdniestria, Nagorno-Karabakh and the South Caucasus.

Secondly, Germany wants to work on strengthening the OSCE’s crisis response capacities. The first report by the Panel of Eminent Persons, led by Ambassador Wolfgang Ischinger, can serve as a basis for this important work. The report highlights essential points, such as providing the OSCE with a legal personality, enhancing the role of the Secretary General, and providing the Secretary General with better budgetary resources to deal with emergency situations.

Thirdly, Germany wants to use the OSCE to work on a broad range of issues of common concern, including conventional arms control and updating the Vienna Document. Arms control was an issue of major disagreement between Russia and the West already prior to the Ukraine crisis. Russia unilaterally suspended the CFE Treaty in 2007, as the West continued to insist on a Russian military withdrawal from Moldova and Georgia in exchange for the ratification by NATO of the Adapted Treaty on Conventional Armed Forces in Europe. In the current atmosphere, negotiations on arms control have become almost impossible. Yet, Berlin wants to focus on updating the politically-binding Vienna Document on Confidence- and Security-Building Measures, which is about information-sharing and inspections in the military realm. This is essential as the document’s reissue is due this year. The planned high-level Military Doctrines Seminar on 16 and 17 February in Vienna can serve as a catalyst in this regard.

Germany also wants to work on combating terrorism and tackling migration, two topics that are a concern to many OSCE participating States. Defining the role of the OSCE in tackling migration (see here previous blog on this issue) will become more urgent, as the EU is split on the issue and has not been able to agree on a common policy that includes mandatory quotas and sharing refugees more equally. Serbia in its capacity as OSCE Chair has done the groundwork on this topic in 2015 by having tabled and debated a draft Ministerial Council declaration on migration, which was close to reaching consensus in Belgrade.

Fourthly, CiO Steinmeier put special emphasis on the importance of respecting human rights and democratic institutions and called them “an integral part of our shared security”. He stated that Germany would focus on improving implementation of OSCE human dimension commitments and in this context announced that – similarly to Serbia and Switzerland –Germany would conduct a self-evaluation exercise in order to monitor its own implementation of human dimension commitments. The human dimension is an area of considerable disagreement among OSCE participating States with Russia and some of its proxies accusing the West of double standards and distorting the balance between the three security dimensions of the OSCE. This deep disagreement could be observed at last year’s OSCE Ministerial Council meeting in Belgrade, where participating States could not reach consensus on any of the human dimension texts that were on the table.

Fifthly, CiO Steinmeier said that Germany wants to work on enhancing economic cooperation in the OSCE area as this could “contribute to confidence-building”. For this purpose, Germany plans to hold a conference in Berlin in May in order to provide businesses the opportunity to discuss how to enhance economic connectivity in the OSCE area, including with regard to infrastructure, transport and digital lines of communication. This could help to upgrade the economic and environmental dimension of the OSCE during difficult times when there is not much agreement on politico-military and human dimension issues.

Germany a neutral and honest broker?

While Germany’s priority areas were generally welcomed and supported by most OSCE participating States, the question remains how Berlin will manage the renewed confrontation between Russia and the West. The crisis in eastern Ukraine and the illegal annexation of the Crimean peninsula have called into question core commitments contained in the 1975 Helsinki Final Act, the 1990 Charter of Paris and the 2010 Astana Declaration. It seems that a common understanding of how to maintain the security order of Europe is not in place anymore. Finding solutions for that lack of common understanding and rebuilding trust will be a major challenge for the German OSCE Chairmanship. Using the momentum that has been created by the final report of the Panel of Eminent Persons could be useful in this context. For this to happen, a dialogue on European security issues should continue within the OSCE. In addition, the final report very clearly lays out the different historical interpretations of the renewed East-West confrontation. As suggested by the OSCE Network of Think Tanks, initiating a dialogue on historical reconciliation could be a starting point in overcoming this deep divide.

With regard to the Ukraine crisis, Germany will be expected to act as honest and neutral broker and to help build consensus. Will Germany be considered neutral by all sides? It is hard to ignore that Germany is the leading power within the EU and a strong member of NATO. In comparison, the two previous Chairs, Switzerland and Serbia, were neither EU nor NATO members. Switzerland was particularly well-placed to mediate between Russia, the West and Ukraine, given its neutrality.

Hence, in the eyes of Moscow, Germany may be viewed as lacking neutrality, especially when it comes to mediating between the parties to the Ukraine crisis. Germany has supported sanctions against Russia within the EU and is a member of NATO and supporter of the alliance’s eastern enlargements. For Moscow, both the EU and NATO are working against its strategic interests in its near abroad and particularly in Ukraine. For Berlin, its engagement with Moscow has so far been dominated and influenced by the former’s role in those two western institutions. (Although it is important to mention that German Chancellor Angela Merkel has always had a privileged relationship with Russian President Vladimir Putin).

The OSCE Chairmanship may offer Berlin a new way of dealing with Moscow. In its capacity as OSCE Chair, Germany presides over an organization in which Russia is an equal partner as decisions in the OSCE are taken by consensus. Germany can thus deal with Moscow in a more balanced way, not overshadowed by EU sanctions or military rhetoric. This may open new possibilities to ease tensions, which today can neither be managed through the EU nor through NATO.

What may work in favor of Germany’s ability to manage events in Ukraine is the fact that it is also a member of the so-called Normandy Format, together with Ukraine, Russia and France. The four countries are all also part of the OSCE and this will lead to more stability and continuity with regard to the political management.

Apart from this, the good news is that the OSCE Unified Budget for 2016 has been adopted on time. This provides the German Chairmanship with the possibility to plan, and it ensures the operational functioning and capacity to act of the Organization. Yet, the mandate of the Special Monitoring Mission to Ukraine will have to be renewed in March and the mission has to be provided with a sound budget. In addition, Germany will have to find a way to reengage Azerbaijan in a positive way in the work of the Organization. Baku closed the OSCE Mission in its country in July 2015 and is at loggerheads with the OSCE Office for Democratic Institutions and Human Rights.

All in all, Germany takes over the OSCE Chairmanship during “stormy times”, as Frank-Walter Steinmeier put it in his inaugural address. Let’s hope that Germany will keep the OSCE ship on course during the next 12 months, until Austria takes over in 2017.

[2] Compare in this context the arguments made in Christian Nünlist and Petri Hakkarainen, ‘Trust and Realpolitik: The OSCE in 2016’, CSS Policy Perspectives, Center for Security Studies, ETH Zurich, Vol. 4/1, January 2016, available at http://www.css.ethz.ch/publikationen/css-policy-perspectives/details.html?id=/t/r/u/s/trust_and_realpolitik_the_osce_in_2016