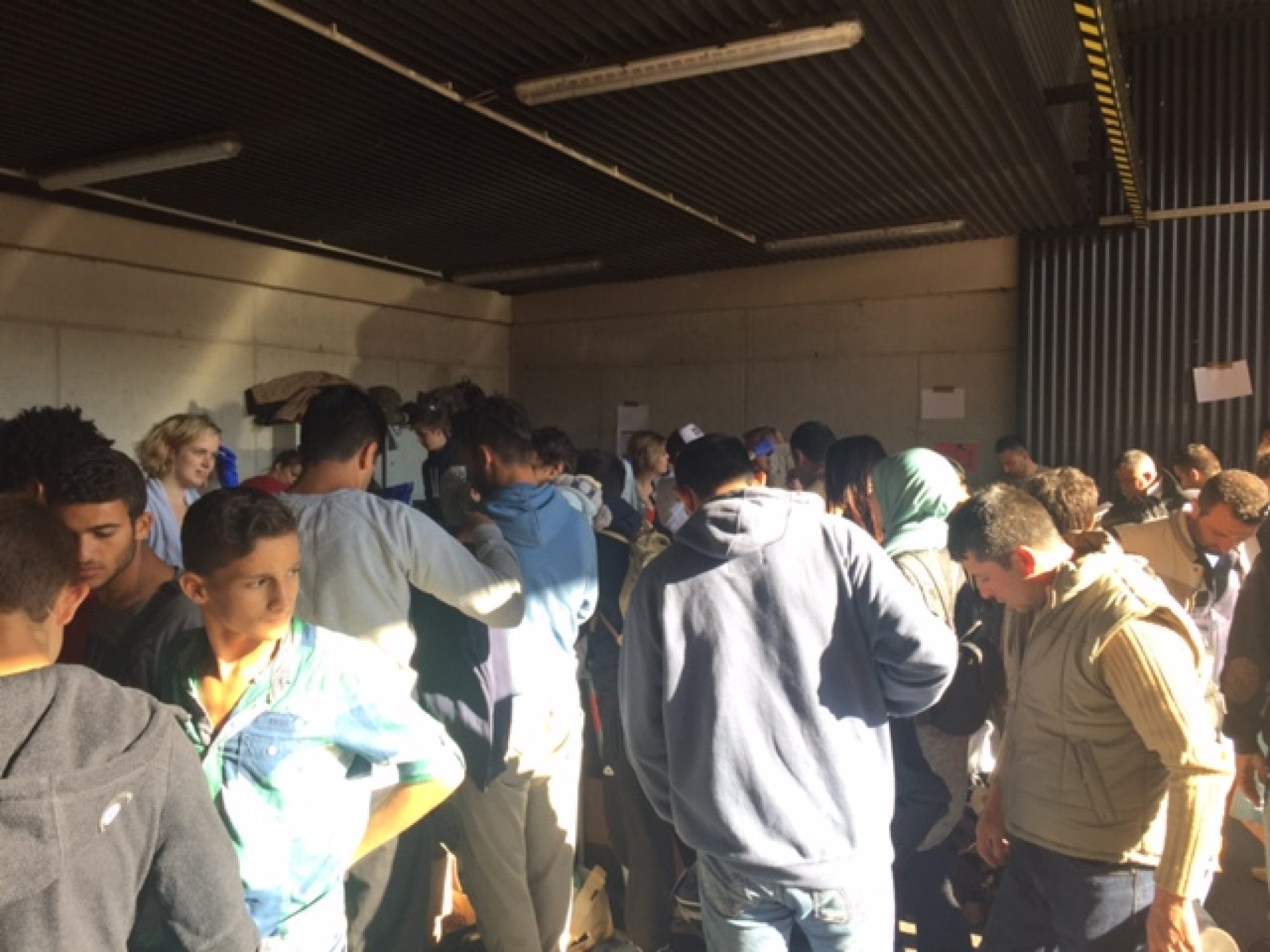 Europe at a crossroads: How the OSCE can help support the current refugee crisis

The current migration and refugee crisis is the biggest such crisis since the end of the Second World War. According to UNHCR, more than 300,000 people – mostly from Syria, Afghanistan, Iraq, Eritrea and Libya – have crossed the Mediterranean Sea into Europe so far this year. An estimated 2,600 have drowned in the Mediterranean Sea since the beginning of the year. Those who survive, arrive on the shores of Italy or Greece. An increasing number of refugees and migrants also arrive via the western Balkans through Macedonia, Serbia and Hungary, hoping to make it eventually to Austria, Germany or Sweden. They flee war, conflict or persecution in Africa or the Middle East, and UNHCR makes it clear that they almost universally qualify for refugee status. Hence, in the course of this summer, it became evident that the current crisis is predominantly a refugee crisis and not a migration crisis.[1]

In a 1 July statement, UNHCR Commissioner for Refugees, António Guterres, stressed that “Europe has a clear responsibility to help those seeking protection from war and persecution.” He also stated that “to deny that responsibility is to threaten the very building blocks of the humanitarian system Europe worked so hard to build.” Two months later, on 4 September, Mr. Guterres made another statement in which he stressed that “Europe cannot go on responding to this crisis with a piecemeal or incremental approach.” What is needed instead, he stressed, is a “mass relocation programme” for as many as 200,000 people. In a similar vein, Jean-Claude Juncker, European Commission (EC) President, today stressed in his first State of the Union Address that “we need more ‘Europe’ in our asylum policy and we need more ‘Union’ in our refugee policy.” In his speech, Mr. Juncker proposed a compulsory emergency relocation mechanism of 160,000 refugees.

However, unfortunately the truth is that EU member states are divided over the issue and are struggling to find a common solution. Germany and France support mandatory quotas while Hungary, Poland, the Czech Republic and Slovakia vehemently oppose this.

Yet, finding a common, EU-wide solution has never been more important. In the course of this summer, it became clear that the current crisis signifies a humanitarian emergency, which requires leadership, based on humanitarian values and solidarity among EU member states. In the past months, dramatic scenes have occurred all over Europe: mass drownings in the Mediterranean Sea, chaotic scenes in overcrowded refugee shelters in Greece and Italy, 71 suffocated refugees in a truck in Austria, clashes between police and refugees at the border between Greece and Macedonia, the harrowing image of the dead body of three-year old Aylan from Syria on a beach in Turkey, inadequate reception conditions for refugees in many EU countries, and finally thousands of desperate refugees making their way on foot along the highway from Budapest towards Austria. One cannot escape the question: “What else has to happen for Europe to act?” Indeed, it seems that Europe has reached a crossroads. EU member states have to decide whether they want to take common responsibility, based on common values, or whether they want to drift apart.

The truth is that Europe lacks a common asylum policy. For such a policy to work, EU member states would first and foremost have to implement existing EU legislation on equal reception standards and on when to grant asylum. Only at that point the introduction of mandatory quotas – as suggested by the EC and supported by France and Germany – would make sense. In addition, the current legislation – the so-called Dublin III Regulation – needs to be overhauled. This regulation stipulates that asylum applications must be filed and processed in the state through which the asylum seeker first entered the EU. Hence, refugees who have stranded on the shores of Greece have to file their application in Greece. If they cross the border into another EU member state, they can be sent back to the state through which they first entered the EU. This puts the main burden on the states at the edge of the EU, such as Greece, Italy or Hungary. Hence, sharing refugees more equally is necessary, but implementing existing European legislation on reception conditions and on when to grant asylum is a prerequisite.

What can the OSCE do?

So, if the EU is currently overwhelmed with the refugee crisis, what could the OSCE do? Indeed, the instability in the Middle East and Africa has significant consequences for the security of the OSCE region. The massive influx of refugees into Europe creates socio-economic challenges in a large part of the OSCE region. Within the OSCE’s comprehensive approach to security, the refugee crisis affects the human and the economic dimensions. Therefore, the OSCE should not close its eyes to this crisis and should develop a response on both a political and practical level.

So far, the OSCE has covered migration-related issues in a variety of ways, mostly focusing on labor migration management and the integration of labor migrants into the societies of OSCE participating States. Decisions on migration management have been adopted on a ministerial level in 2005 and 2009. The OSCE has also worked on preventing exploitation of migrant workers and combating trafficking in human beings. Yet, what is missing is a more systematic and coherent approach to the issue, as well as a stronger focus on how to manage the current influx of refugees (as opposed to migrants) seeking protection from war and conflict. Here are six suggestions that the OSCE could consider:

1. OSCE participating States – which make up the largest regional security organization, based on common values – have a long history in holding each other accountable to implement international and OSCE commitments. Hence, on a political level and through peer review, participating States should call on Hungary, Macedonia, but also on France and Austria, where reception conditions have been criticized, to honor their international commitments in relation to the protection of refugees.

2. In addition, participating States could identify gaps in OSCE commitments related to the protection of refugees, and attempt to strengthen their normative framework. For example, in the 1992 Helsinki Document participating States expressed support for “unilateral, bilateral and multilateral efforts to ensure protection of and assistance to refugees and displaced persons with the aim of finding durable solutions.” Also, in the 1999 Charter for European Security, the OSCE participating States reaffirmed their commitment “to respect the right to seek asylum and to ensure the international protection of refugees as set out in the 1951 Convention Relating to the Status of Refugees and its 1967 Protocol […]”. These commitments should be renewed and strengthened.

3. The Serbian OSCE Chairmanship – affected by the crisis as many refugees pass through its territory to reach Europe – should table a declaration on the refugee crisis for adoption at the upcoming OSCE Ministerial Council in Belgrade in December 2015. This could launch a more systematic approach that will have to be followed-up by the incoming German and Austrian Chairmanships, both rich EU countries, which many refugees eventually hope to reach.

4. Furthermore, the OSCE should stand ready to provide a platform for political dialogue on the refugee crisis. The EU is divided over the issue and seems incapable of agreeing on obligatory quotas and sharing refugees more equally. The OSCE could start a political process on the broader consequences of the refugee crisis, including its economic aspects, social aspects, humanitarian aspects, and also link this debate to other related topics such as combating terrorism or trafficking in human beings. The advantage of the OSCE is its comprehensive approach to security and its broad membership that includes non-EU states such as Macedonia, Serbia or Turkey, all of which are affected by the current refugee crisis.

5. Furthermore, work with the OSCE Mediterranean Partners for Cooperation should also be enhanced and a dialogue should be started on how OSCE Partners for Cooperation, such as Egypt or Jordan, could help tackle the refugee flow towards Europe. These states already host the majority of Syrian refugees. It would therefore be particularly useful to build a bridge – with the help of the OSCE Partner states – to rich Arab Gulf states who could help to host refugees from war-torn countries.

6. The OSCE could also think of creating the post of a Coordinator for Migration and Refugee Issues in the OSCE Secretariat in Vienna. The Coordinator may not only help to create a more systematic approach to migration- and refugee-related issues, but could also support the setting up of a flexible, roving mission that could be dispatched to advise OSCE states east and west of Vienna, including Greece, Italy, Hungary, Macedonia, Austria but also Turkey or France on refugee-related issues. Experts from OSCE field operations as well as from the OSCE Office for Democratic Institutions and Human Rights (ODIHR), who have dealt with refugee issues before, could be asked to join such missions temporarily. In order to be effective, such a roving mission would have to work closely with local NGOs as well as with UNHCR. The mission could first depart on a fact-finding mandate, and then issue recommendations and launch projects on how to integrate asylum seekers into local societies, but also develop proposals on how to create adequate reception conditions for refugees.

While such proposals would require additional resources, OSCE participating States should not forget that the refugee crisis has an enormous socio-economic and security impact on parts of the OSCE region and that the influx of refugees into Europe isn’t likely to stop any time soon, given the unresolved armed conflicts in Syria, Afghanistan; Iraq and Libya.

In addition, the EU’s inability to agree on a common solution – despite Germany’s strong leadership and the EC’s proposals to share refugees more equally – creates a very bad image of Europe. Indeed, if Europe is seen as a group of likeminded countries that share a common heritage and common values, EU member states should start developing a joint approach, based on solidarity. As Jean-Claude Juncker stressed in his State of the Union Address: “No poems, no rhetoric; action is what is needed.” Let’s hope that – with the support of the OSCE and the international community at large – Europe will choose the right path.

[1] A refugee fears to be persecuted in his or her home country and is forced to leave for that reason. A migrant freely takes the decision to leave his or her country, predominantly for economic reasons (For exact definitions consult the 1951 Geneva Convention on the Protection of Refugees and the International Organization for Migration (IOM).