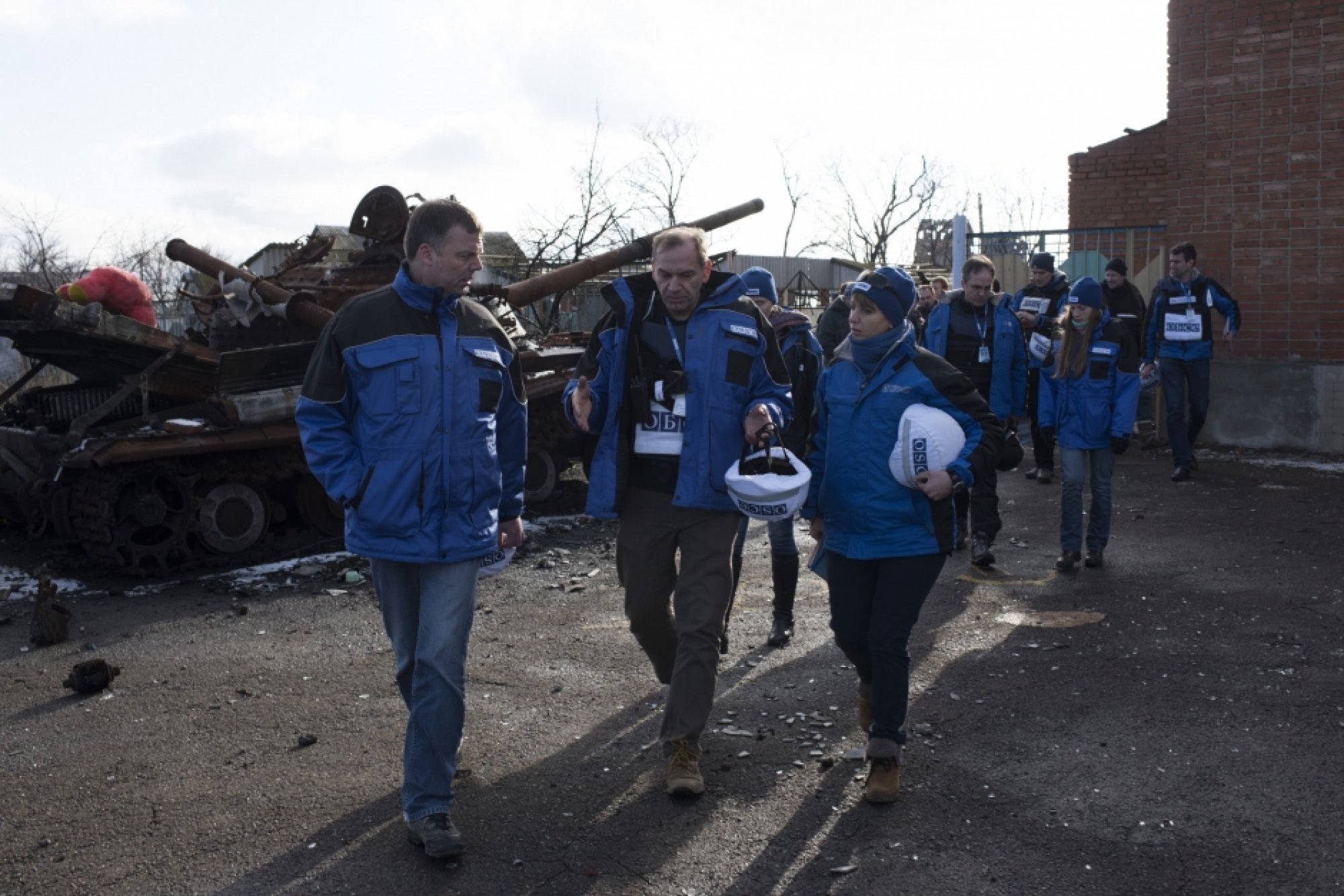 Advantages of a Civilian Mission: Keeping the Peace in Ukraine

Ukraine, which slipped into civil war more than 3 years ago, is not at peace: the guns in Donbas are still not silent, and the Minsk cease-fire agreement is violated every day. According to the UN, the death toll in the conflict now exceeds 10,000 lives including about 2,800 civilians, and over 24,000 civilians injured.

This “forgotten conflict” –continues to create an unending hardship to the civilian population who are caught in-between, with difficult access to education, health and other public services. There is shelling of urban areas, water facilities, electricity lines and critical infrastructures. Moreover, the conflict threatens to further escalate, and concerns abound that there could be new escalations of armed violence in Eastern Ukraine, and possibly between Ukraine and Russia, in the not-too-distant future.

How can the international community help the peace in Ukraine, and contribute to the political process toward a settlement of this injurious conflict? With recent calls for the deployment of a United Nations peacekeeping force in the conflict – which both Russia and Ukraine have floated in recent weeks – it is worthwhile to step back and consider the virtues of a civilian mission in this context and the relative merits, and demerits, of a UN engagement.

The Special Monitoring Mission (SMM) has been established by a consensus decision of all 57 participating states of the OSCE in early 2014, when disturbances and violence began to occur across Ukraine in the aftermath of the Maidan upheaval. It is an unarmed, civilian mission with the mandate to monitor and report on the crisis situation in Ukraine and to facilitate dialogue among all parties to the crisis. After the conclusion of the Minsk cease-fires in September 2014 and then again, in February 2015, the SMM had increase its holdings from 100 to 1000 monitors. Today, there are around 800 monitors observing compliance in a highly volatile cease-fire environment.

Over the years, the mission has been exposed to numerous critical security incidences. For example, a patrol was kidnapped three years ago, and, more recently, a member of the Monitoring mission was killed last April and two more injured in a land mine incident. Other threats to SMM monitors include exposure to indirect fire and attacks on their unarmed UAVs with weapons and jamming.

Despite the continuous presence and good work of the SMM in the contested zone, there is little space for the political settlement, as agreed in Minsk in early 2015, to move forward. The stalemate is due to disagreements among the parties over sequencing of the implementation of the Minsk commitments. This includes the full access to the Russian-Ukrainian state border and the constitutional adjustments and legislations by the Ukrainian parliament that should enable local elections in certain areas of the Donestsk and Luhansk regions to proceed under Ukrainian law. Moreover, the continuous lack of security remains a key concern.

It is in this stalemated situation that President Poroshenko of Ukraine and Foreign Minister Lavrov of Russia have both submitted last month their separate proposals for a UN peacekeeping mission in Ukraine to the High-Level Segment of the UN General Assembly. Not surprisingly, the Ukrainian and Russian approaches to such a mission rest on very different arrangements and associated strategic logics: Russia envisages a hybrid arrangement, where UN peacekeepers would protect SMM monitors of the OSCE mission. The Russian draft resolution sees the peace force operating along the “factual line of contact” that risks creating conditions of separation, but not necessarily of conflict resolution. Furthermore, the planning and deployment of the mission would be contingent upon the approval of Russia’s allies in “certain areas of the Donestsk and Luhansk regions of Ukraine”.

For Ukraine, the UN mission should rather act as a robust operation enforcing the Minsk cease-fire and supporting the Ukrainian government in its efforts to regain full control over the territory of Ukraine “within its internationally recognized borders”. In the Ukrainian draft “the certain areas of the Donetsk and Luhansk regions of Ukraine” constitute a “threat to international peace and security”. Accordingly, the Ukrainian proposal requests the mission to be deployed with potentially robust (i.e., proactive) enforcement authority under the UN’s Security Council’s Chapter VII. Furthermore, the UN mission would incorporate in its mandate elements of the political settlement, such as the monitoring of the withdrawal of foreign forces from the territory of Ukraine and “assisting in the reinstatement of full control of the state border by the Government of Ukraine throughout the conflict area”.

How would a future UN peacekeeping mission in Ukraine relate to SMM, the pre-existing civilian and unarmed mission of the OSCE? In the spirit of a stronger regional-global partnership, the UN could work with the OSCE towards a hybrid mission mandate, with distinct responsibilities and distinct organizational identities. Such a model of co-deployment is proposed by the Russian draft resolution that makes the protection of the SMM the centrepiece of the UN operation. The draft refers distinctly to the SMM in the proposed name of the UN Mission (“United Nations Mission on Support in Protecting the SMM OSCE in the South-East Ukraine”), and stipulates that the UN mission’s equipment with small arms and light weapons is “mandated exclusively to ensure security of the SMM OSCE observer groups”. It would be a kind of force protection mission by “bodyguards with blue helmets”, but with no enforcement authority towards the break-away republics.[1] Kiev, in turn, makes no reference to the SMM, when it comes to the UN mission mandate. In fact, under the original Ukrainian plan, the fate of the OSCE mission would be unknown.

The peacekeeping proposals have been welcomed with some caution by the US, Germany, and Canada among other states, all insisting that the peacekeepers would need access to all of the Ukrainian territory, including the Russian-Ukrainian state border. In view of the diametrically opposed views between Russia and Ukraine, and the fact, that there is currently no peace to keep in the Donbas region, the chances for an agreement among the Security Council members for a peacekeeping mission in Ukraine remain slim.

The virtues of a robust civilian mission

Given the difficulties to deploy a UN peacekeeping mission in Ukraine, what options do exist for third parties such as the OSCE to facilitate the implementation of a peaceful settlement of the conflict in Eastern Ukraine? Could the OSCE as a regional organization step in with a military peace mission under Chapter VIII of the UN Charter? On legal grounds, the OSCE has the ability to deploy a military peacekeeping force on its own right.[2] But it has currently neither the experience nor the capacity to deploy an armed force. Moreover, the required consensus decision of all 57 OSCE participating states for the deployment of an armed force is highly unlikely.

The OSCE has conducted missions in the past that had peacekeeping attributes. In 1998, it deployed a large and complex civilian mission in Kosovo with an intrusive cease-fire verification mandate; it also deployed an unarmed military unit to Bosnia, as well as unarmed military observers to Moldova and Georgia and did send civilian police advisers as part of the Community Security Initiative to Kyrgyzstan. The OSCE mission in Eastern Ukraine is the first one where monitors operate across a war zone for several years.

There are a number of advantages for deploying a civilian monitoring mission, or a special political mission instead of a peacekeeping operation[3].

How to make a civilian mission more robust?

It is clear that civilian unarmed missions are not “fit for purpose” for force protection tasks nor for the protection of civilians. The OSCE mission in Kosovo, for instance, had to rely on a NATO extraction force for security assurances. In Ukraine, in light of the absence of a UN peacekeeping force, how can the SMM protect itself, especially in view of a history of hostage taking and other types of risks? Here are a few measures drawing from the SMM experience that could make a mission more resilient; they may also be useful for other civilian missions of the UN and regional organizations:

Civilian missions and the future of peace operations

To what extent could the SMM be a model for future peace missions? As a civilian mission, its strength is its vulnerability: no arms, no uniforms, no national insignias, impartial with a flexible mandate that allows the mission to evolve over time. Furthermore, the various hardening measures and the extensive use of advanced technical means allows compensating for the lack of a military dimension.

The adaptability of civilian-led multidimensional missions facilitates the programmatic and operational linkage to peacebuilding and humanitarian actions. There are now other civilian missions endowed with classic peacekeeping principles of consent, impartiality and the non-use of force, such as the UN Verification Mission in Columbia that also operate in a potentially volatile security environment. In light of the current review of the UN peace architecture, including the role of peacekeeping, the spectrum of and interactions between peacekeeping and special political missions must be reviewed.

This also applies to the OSCE that needs to review its field missions in light of the UN reforms. The increased resilience of civilian missions makes them de facto peacekeeping operations, as they operate in conflict zones where the implementation of a peace agreement is at risk. In fact, the differentiation between peacekeeping and civilian missions appears increasingly obsolete in view of the UN reform towards a single political and operational structure in peace and security.

This article originally appeared on ‘Political Violence @ A Glance’. It was written by Fred Tanner, who was a Practitioner-in-Residence at the Korbel School of International Studies in September 2017. The views expressed in this contribution are those of the author only.

[2] Larissa Daria Meier, A Role for OSCE Peacekeeping? From the 1992 Helsinki Guidelines to the Special Monitoring Mission to Ukraine, CORE Working Paper 27, 2015. https://ifsh.de/file-CORE/documents/CORE_WP27.pdf

[3] For the purpose of this paper I will use the terms of civilian mission and special political mission interchangeably, even tough the latter is a UN term.