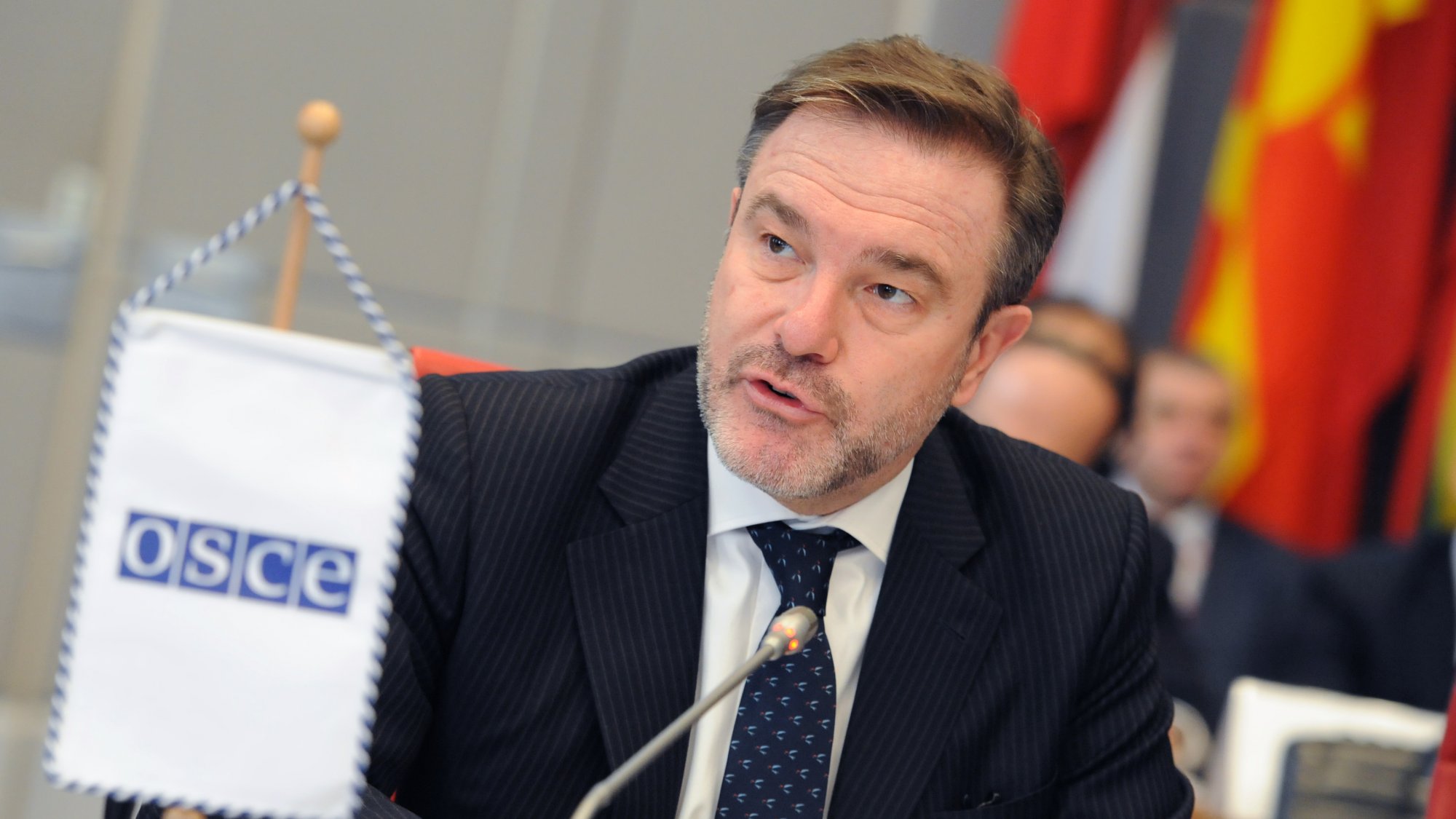 “The essence of the spirit of dialogue is to involve everybody”

Looking at the past twelve months of your OSCE Chairmanship, in which area would you say that Italy invested most of its political capital?

Azzoni: We tried to act at 360 degrees but if I have to choose one issue I would say that we invested a lot in helping to make further progress in Transdniestria. It is a protracted conflict and we proved that with political capital something can be achieved. Former Italian Foreign Minister Franco Frattini travelled to the region several times and held talks with all sides. He was supported by the OSCE Mission to Moldova. We proved that with the right mixture of political capital, commitment of the Chairmanship, and presence on the ground, we can achieve something.

As a concrete example, following the successful “output-based approach” adopted by the German and Austrian Chairmanships, we established the first Joint Vehicle Registration Offices, which allowed the resumption of international road traffic for Transdniestrian vehicles. I believe that the Slovak decision to reappoint Mr Frattini as Special Representative of the Chairperson-in-Office paves the way for further progress in 2019.

Furthermore, the appointment of Paola Severino as special representative for fighting corruption, made a real difference. She is a former, very well-respected Minister of Justice in Italy. Concretely, she tried to raise awareness of the wide-spread problem of corruption. We never lectured anybody and never pretended that we were better than anyone else. This is not the Italian style. Instead, we explained to participating States how we in Italy – while still fighting against this phenomenon – succeed in fighting corruption. We showed that it was important not to deny that there is a problem. We all know that almost every OSCE participating State is affected by corruption in one way or another.

Which of your other priorities did you manage to implement? What are the challenges that remain after the end of your OSCE Chairmanship?

Regarding the remaining challenges, I would say that we had hoped to achieve more in helping to settle the conflict in and around Ukraine. This was unfortunately not possible. To future Chairmanships I would like to say that it is vitally important that the OSCE Special Monitoring Mission in Ukraine feels that the Chairmanship is strongly and continuously supportive.

How will the declaration on the Mediterranean dimension concretely change the work of the OSCE?

Looking at other decisions that were adopted at the OSCE Ministerial Council in Milan, which ones do you consider most important?

Seriously, I have to tell you that, just like a father with his children, I love all of the decisions equally [laughing]. Also, after a week of an average sleep time of two hours per night in Milan, I reached my physical, intellectual and diplomatic limits. For a while, I was honestly afraid that there might not be many decisions adopted in Milan. So, when the first decision on the safety of journalists came about, I was very happy and relieved, and proud. It was the first decision concerning freedom of the media that the OSCE adopted in 24 years!

But I admit that what really moved me was the decision on combating violence against women. When we adopted it, after 4 years of no decisions in the “human dimension” of the OSCE, I had two immediate thoughts: First, we filled a black hole in the OSCE, and second, we witnessed that the OSCE was alive and not just a talking shop. I consider it very positive that an OSCE head of mission told me that he has already started using the decision, for example for projects, workshops, and meetings on the issue of combating violence against women.

I also want to briefly mention those decisions that – unlike the other 11 – failed to reach consensus, namely those in the politico-military dimension. We did achieve an unexpectedly substantial discussion on military security issues among participating States, even if we failed to build the necessary consensus. We were fully committed and I really want to pay credit to my team who worked so hard to achieve a positive outcome.

Looking at some of your personal lessons-learned, I would be interested in your views on the OSCE leadership model. From your experience this year, with Italy holding elections during the OSCE Chairmanship, do you believe that the model is viable in the long-term, or should it be changed?

Yes, true, we held elections early in the year. It then took four months to form a government and the new Chairperson-in-Office took over in June, just before the OSCE summer recess.

To be honest, this was a difficult situation. As Ambassador in Vienna, I missed some political weight above me that could act when pure diplomacy reached a dead end. However, once the new government was formed, I had that support again. But it came late in the year and therefore there was a political vacuum for a while.

Nevertheless, I am not sure there is a lot of room for completely changing the leadership system in the OSCE.

What we did instead is we took over a very smart idea by the Austrian 2017 Chairmanship. Austria at the time decided to make much better use of the OSCE Troika. We did the same and inherited this system. The Troika guarantees continuity in the work of the Chairmanship. Many of the issues stay the same over the years, such as the conflict in and around Ukraine. In my view, the Troika should be even further enhanced.

In addition, I think that it would be advantageous if we could decide earlier in advance who will chair the Organisation during which year. This would greatly help to enhance planning and improve predictability.

On a more futuristic note, we should start thinking about a rotating Chairmanship in alphabetical order, like in the European Union. The advantages are that we would know many years in advance who will chair the OSCE and this would give us a lot of predictability. The main disadvantage, in my view, would be that the political weight of the Chairperson-in-Office would be automatically reduced.

Another issue that is unique in the OSCE is its consensus principle. Given your experience during your Chairmanship, how do you view this principle in the OSCE? Should it be changed or adapted?

It should definitely be adapted. Consensus should be reserved to political decisions, such as for example the decision on sending a monitoring mission to Ukraine. Being based on consensus from all 57 participating States, this decision has a lot of legitimacy and it is strong as steel.

However, when it comes to smaller, administrative issues, such as renewing the computers of the OSCE Secretariat, the consensus principle should not apply. Let me share with you one insight about consensus that I have once heard from a former colleague, who told me: “Consensus is reached when everybody leaves the room a little bit pissed off. If there is somebody too happy or too unhappy, then consensus is likely to break down again.”

In the OSCE, we should reduce the amount of issues that have to be adopted by consensus, because the main problem of the consensus principle is its abuse. If you have to spend time, energy and political weight in order to achieve consensus on every minor issue, the OSCE loses credibility. I find it very hard to justify having to ask a Foreign Minister – whose agenda is full with serious issues – to actively look into the issue of buying new computers for the OSCE Secretariat [laughing].

Finally, can you give a few points of advice to the 2019 Slovak OSCE Chairmanship?

Second, never take anything for granted. The only friend of the Chairmanship is the Troika. For one reason or another, as a Chair, you are like a paratrooper: always surrounded by “enemies” [laughing].