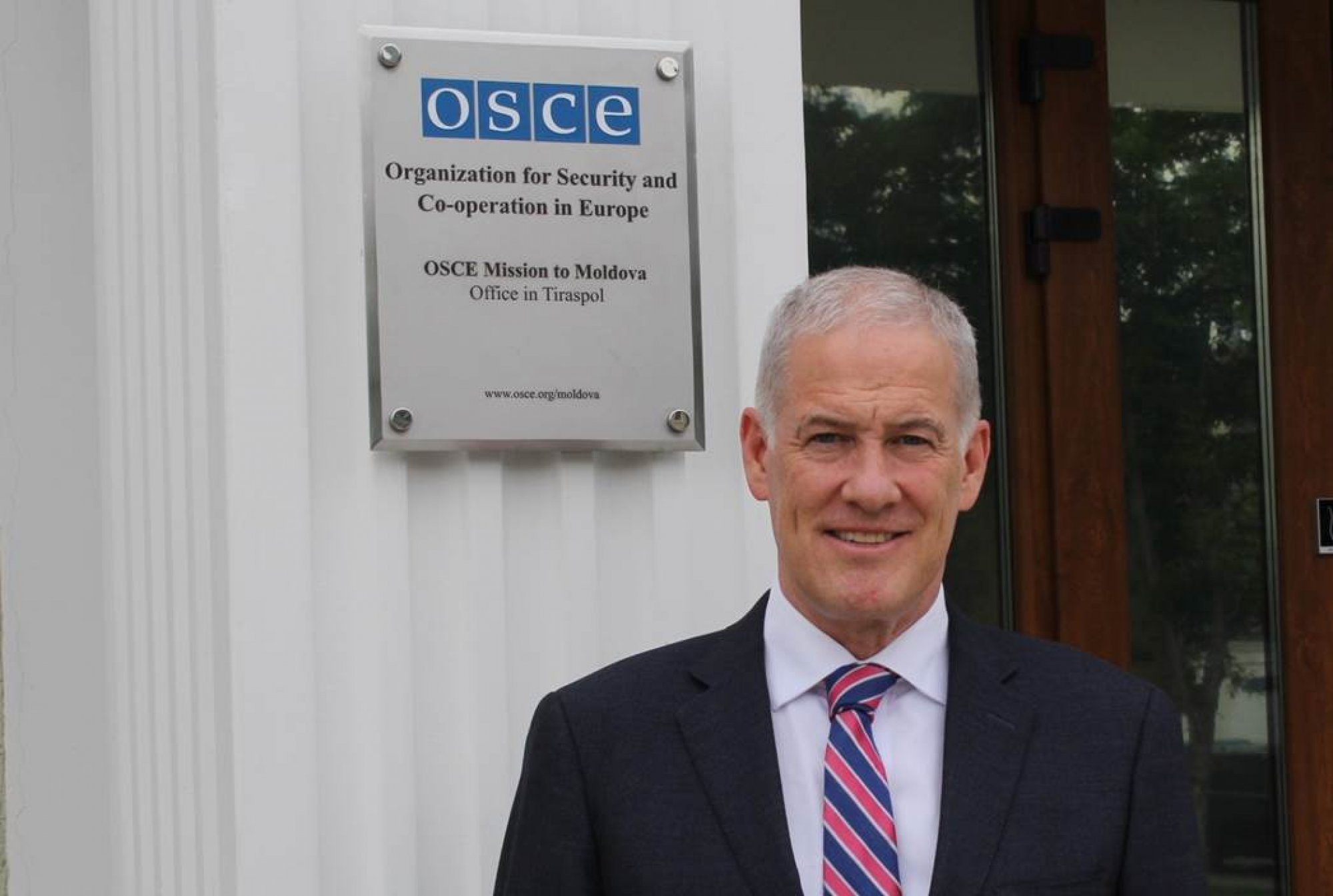 “I am confident that a settlement is possible”

Ambassador Michael Scanlan from the United States was appointed Head of the OSCE Mission to Moldova and the OSCE mediator to the Transdniestrian settlement process in July 2014. Before joining the OSCE, he served as Director of the Office of Eastern European Affairs in Washington, D.C., and Chargé d’Affaires to the U.S. Embassy in Minsk, Belarus.

In this exclusive interview, Ambassador Scanlan provides unique insights into how the Transdniestrian settlement process has evolved over the last four years.

The protracted conflict between Moldova and Transdniestria dates back to the dissolution of the Soviet Union, when the region of Transdniestria broke away from Moldova in a brief war in 1992, claiming over 1000 lives. Despite a ceasefire brokered by Russia, the underlying political conflict was not settled. Transdniestria turned into a de-facto state but has never been recognized as a sovereign and independent country by the international community.

The OSCE chairs the negotiations between Moldova and Transdniestria aimed at achieving a final settlement to the conflict that affirms the territorial integrity and sovereignty of the Republic of Moldova, with a special status for Transdniestria within Moldova. Since 2005 this process, which has a three-tiered negotiating format, has been officially known as the 5+2 format, which includes Moldova and Transdniestria as the sides, Russia, Ukraine and the OSCE as mediators, and the USA and the EU as observers.

A meeting of the Transdniestrian settlement talks in the 5+2 format took place in Rome on 29 and 30 May 2018. What was decided at that meeting and what was the concrete outcome?

The 5+2 meeting in Rome, as was the case in Vienna last November, was convened to mark the remarkable progress made by the sides in reaching and implementing agreements since the fall of 2017. These agreements were reached at the OSCE Mission’s offices in Chisinau and Tiraspol through direct negotiations between the Chief Negotiators and in the 11 thematic Working Groups they oversee. The 5+2 meeting in Rome also saw the sides commit to finalise by the end of 2018 the remaining issues from the so-called ‘package of eight’, the priorities the sides had identified at the start of 2017. A number of these issues have been under discussion for 10-15 years, but now formulas have been agreed upon and are being implemented by the sides.

They relate to the functioning of Latin-script schools on the left bank, the access to farmlands in the Dubasari region, the opening of the Gura Bicului-Bychok bridge, the free movement of people, goods and services, the apostilization of Transdniestrian university diplomas by Moldova’s Ministry of Justice, the reintegration of the telecommunication market, the establishment of a mechanism that would allow the participation of vehicles from Transdniestria in international road traffic, and a review of criminal cases for possible resolution related to some of the issues above that are now being resolved.

What is important is that the commitments by the sides in the Rome 5+2 protocol affirm that we have established a new dynamic that we call the ‘new norm’. We are now in a position where the sides reach agreements with defined timelines and mechanisms that guide the ensuing implementation. I must also add this would not have been possible without our 5+2 international partners – the Russia Federation, Ukraine, the United States and the European Union – working in concert to send the message to the sides that output in the process is what is needed, and indeed, expected.

In the context of the overall process, how significant are the diplomatic achievements of the last three years?

Quite significant as agreements are being implemented, and thus people are starting to feel the benefits that will come from a settlement. The journey to this positive dynamic that gives people hope started in 2014. At the time, I suggested in Vienna that the then Swiss OSCE Chairmanship and the OSCE Head of Mission, the latter as the OSCE mediator, work with a coordinated voice and a common policy approach, and that collectively we seek to move the negotiations from a process-based approach to an output-based one.

What I had in mind was to convene 5+2 meetings when the sides achieved concrete progress. Holding a meeting for the sake of the meeting was not a recipe for success. The issues to solve are complex and thus there needed to be an impetus for frequent direct meetings between the sides as the expertise lies with them to find solutions, as reintegration requires agreements on how to structure governance, commerce and social services. The Swiss Chairmanship agreed, as did every subsequent Chairmanship; this continuity and the pooling of efforts is what helped foster the success we are seeing today.

Why is there such significant movement in the negotiation process now?

Today we are seeing local ownership and an active role by the political leaders on both sides, and the importance of that cannot be overstated. Also, the “package of eight” agreements are structured to positively affect the lives of people on both banks of the Dniester. This thus creates constituencies in the population that support the settlement process. This is the ultimate success.

When it comes to what is the end state for the negotiations, it has never been in question. The end state must affirm Moldova’s sovereignty and territorial integrity with a special status for Transdniestria within Moldova. This has been consistently affirmed by all 57 OSCE participating States, including the Republic of Moldova. Now it is up to the Sides to work out what that special status for Transdniestria within Moldova will look like, and the agreements in the ‘package of eight’ is starting that process.

What exactly is the role of the OSCE and your role in the negotiations?

The way the process is structured is that the Head of the OSCE Mission to Moldova is also the OSCE mediator in the settlement process. I am also the only participant from the 5+2 international format that also participates in the other two tiers of the negotiation process in the country. With the focus now on the direct meetings between the Sides held in the Mission’s offices, the OSCE is particularly well positioned to facilitate progress.

To support this process, I use silent shuttle diplomacy to mediate between all the stakeholders on both sides. In general, my goal is to help the sides find common ground. This means that I try to motivate them to focus less on their criticism of the other side, and more on what they can do to move the process forward.

For this to work all parties have to develop a sense of respect and understanding of each other’s roles; and I am happy to say we are now seeing this.

Right now, the process is so dynamic that the OSCE Mission to Moldova is actually stretched to its limit. To illustrate this more precisely: We had 20 working group and Chief Negotiators meetings in just one month. But this is good as it underscores the commitment of the sides to work together to find the compromises needed to achieve agreements. There is no doubt that the process is moving forward at a fast pace.

What is the concrete impact of the conflict for the population on the ground?

The administrative boundary line between Moldova and Transdniestria prevents freedom of movement and this has to be addressed. It is important to understand that freedom of movement applies to all aspects of daily life. If you want to travel for personal or commercial reasons, you need to be able to move freely within your own country.

In a broader sense, the insecurity and lack of predictability also affects the livelihood of the people on the ground, especially when it comes to foreign investment, tourism and the economy in general.

So, if the goal is to move people’s lives forward and to create a future for everyone, in a collective sense, the economic drag on Moldova and the economic insecurity created by the lack of freedom of movement and the perception of security threats that it engenders needs to be removed.

Also, the government – to its credit – has started to promote an inclusive and tolerant society that values the diversity that exists in Moldova and creates a sense of place for all the people of Moldova be they national minorities or regional groupings. In particular, people in Transdniestria are closely watching for signs that Moldova is ready to accommodate them in a reintegrated Moldova. In the same context, there needs to be a healing discussion of painful periods of Moldova’s history before, during and after World War II. There are diverging interpretations of this modern history between many on the right and left bank, including their recent painful past. The government has started to address some of these subjects such as the Holocaust in a local context.

People in Transdniestria also need to believe the talk of a special status is credible. Moldova’s Chief Negotiator in 2017 frequently stated that the vision of special status for Transdniestria would resemble the autonomy of Gagauzia within Moldova. Thus, a fully functional autonomy of Gagauzia would be a reassuring signal for Transdniestria; but unfortunately, the legislative steps by the central authorities to make this a fact still remain a work in progress 24 years after Moldova adopted its 1994 Law on the Special Legal Status of Gagauzia.

As a final question, I would like to ask whether you would have any specific advice for your successor? Especially given that you have been in your position for four years and noting that your mandate ends at the end of this summer.

What I would recommend is to keep nurturing the process we have now; meaning the ‘new norm’. The agreements the sides have struck and implemented are creating a degree of trust between the sides that had not existed before.

It is the cultivation of this trust that will make possible a reintegrated Republic of Moldova that includes within it a special status for Transdniestria. This will also send a strong signal to the entire region that it is possible to resolve protracted conflicts, and that the OSCE with the cooperation of the participating States can play a helpful role.

After four years, I leave the OSCE with gratitude for having been able to be a part of the OSCE and the good work it does. I can also say I leave confident that a settlement is possible.

The interview was conducted in Vienna on 6 June by Stephanie Liechtenstein, Web Editor-in-Chief.