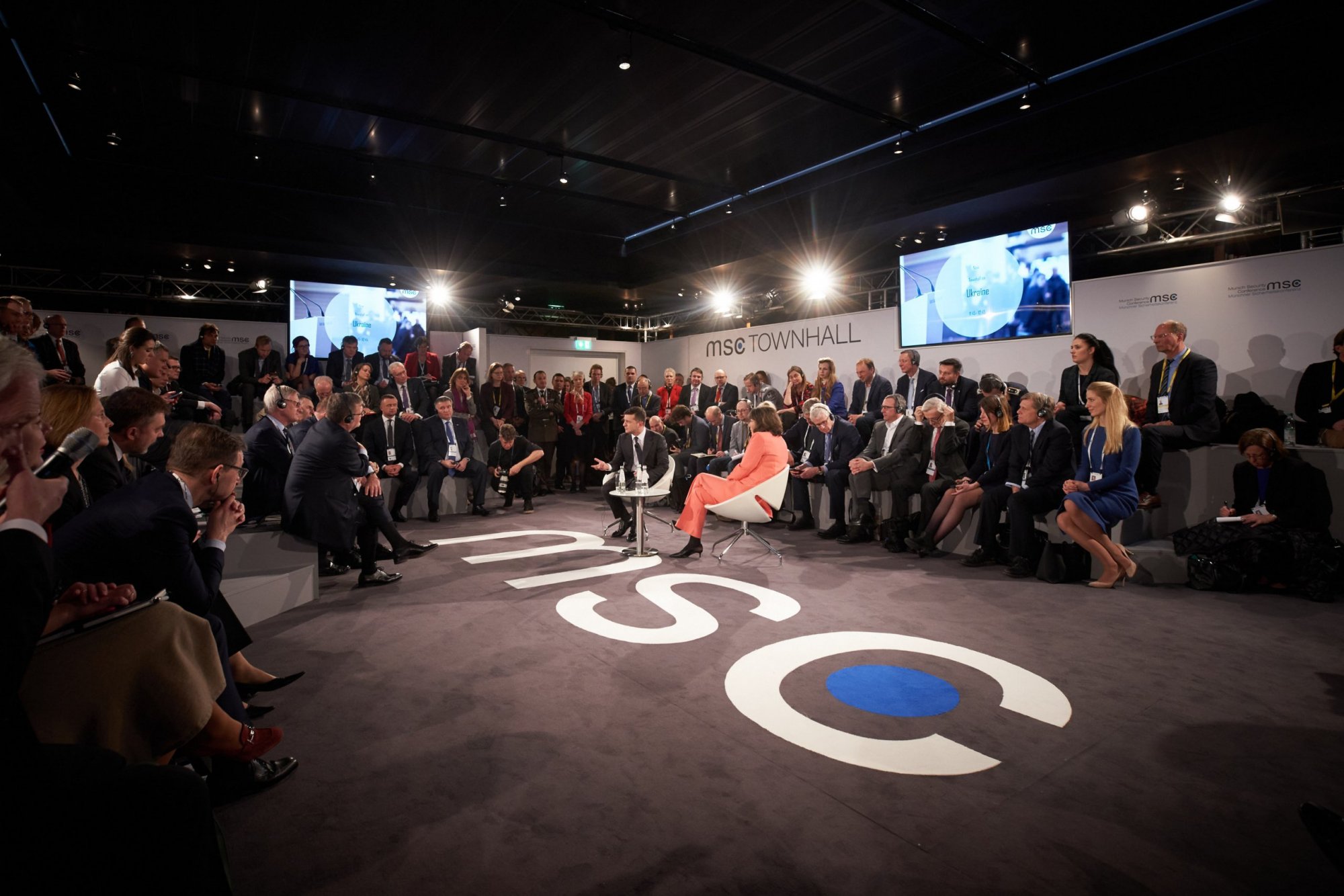 The strong focus on China and Chinese technology at this year’s Munich Security Conference pushed other issues to the sidelines, including the continuously strained relations between Russia and the West, and the ongoing conflict in eastern Ukraine.

Unlike in previous years, Russian Foreign Minister Sergey Lavrov spoke a mere seven minutes, and after all the talk about China, it seemed that his remarks remained somewhat in the background. He lamented many of the issues that are by now well-known to the international community, such as the deployment of NATO military infrastructure along Russia’s borders, military exercises in the vicinity of Russia’s borders, as well as a general increase in military spending.

In Lavrov’s words, all of this shows a “barbarisation of international relations”, which is leading to “unpredictability”. He called upon reinstating the “principle of indivisible security”, as laid down in the 1975 Helsinki Final Act, 1989 Charter of Paris and 2010 Astana Declaration.

Yet, most leaders at the conference remained conspicuously silent on how to deal with Russia, particularly against the background of ongoing tensions between East and West, as well as Russian jets bombing rebel-held towns in northwest Syria’s Idlib province.

It was mainly French President Emmanuel Macron who took up the issue of how to handle Russia in the immediate EU neighbourhood. He called for a closer dialogue with Russia to resolve differences, since, according to him, other policies such as sanctions and counter-sanctions had not produced any results.

“We need a European policy on Russia, not just a transatlantic policy,” he said. And he added: “There is a second choice, which is to be demanding and restart a strategic dialogue because today we talk less and less, conflicts multiply and we aren’t able to resolve them.” He said that in the end, Russia would need a “European partner” as other alliances, including with China, were not “viable” for Moscow in the long-term.

Yet, Macron did not give any specific conditions for such a closer dialogue with Russia.

The French President also took up the issue of Ukraine and reminded the audience of the recent Normandy Four Summit in Paris, which in his view, restarted some form of “dynamism”.

In contrast, U.S. Secretary of State Mike Pompeo’s speech did not touch upon how to mend relations with Russia or how to find concrete solutions to pressing security issues. He focused on the Nord Stream 2 pipeline project, which Washington does not support because it believes that it will significantly increase European dependence on Russian gas. In this context, Pompeo also announced that the U.S. would provide 1 billion USD to bolster an energy project for Central European countries on the Baltic, Adriatic and Black Seas in an apparent effort to counter the Nord Stream 2 pipeline from Russia to Germany.

Nevertheless, Pompeo and Lavrov had a bilateral meeting on the margins of the Security Conference, even if the U.S. State Department did not publicise the meeting and refused to give further details on it. Lavrov told reporters on Monday: “We touched upon all the problems on the agenda of our strategic dialogue, including those in the competence of the UN Security Council permanent members and arms control issues.”

NATO Secretary General Jens Stoltenberg also referred to competition from “a more assertive Russia, which seeks to return to a world of spheres of influence”. As a result, NATO Allies are “significantly increasing the readiness” of their forces and are “upholding sanctions”, he said.

Hence, the impression emerged that little attention was devoted to finding concrete solutions to the pressing security issues facing Russia and the West, including military exercises, the faltering arms control regime, and the lack of military-to-military contacts and cooperative solutions.

Similarly, the conflict in Ukraine was not discussed as prominently as in previous years, despite the fact that this conflict – on European soil – remains unresolved in its sixth year.

A peace plan for Ukraine was presented on the margins of the Munich Security Conference, but it drew heavy criticism particularly from Ukrainian and U.S. experts for being too much in favour of Russia. The plan was presented by a group of European, American and Russian former government officials and experts called the Euro-Atlantic Security Leadership Group.

Ukrainian President Volodimir Zelensky himself did not get a place on the main stage of the Munich Security Conference, and instead addressed a smaller so-called townhall meeting on the margins of the main conference. He remarked that he had “mixed feelings” about the Munich Security Conference Report, which mentions Ukraine only eight times. “This is the lowest number since the annexation of Crimea,” he said.

Zelensky delivered a short speech at the meeting, before being interviewed by CNN anchor Christiane Amanpour.

Zelensky said that international treaties did not protect any nation from the rule of the strongest. “No documents, no signatories, no memorandums can protect anyone. This is what we tell you as Ukrainians with our example. Honestly, my suggestion to all other countries from our own experience: All of you cannot trust any documents,” Zelensky said.

During his speech, Zelensky also spoke about the recent Normandy Four Summit in Paris and said that the intention now was to identify three additional disengagement areas in eastern Ukraine by the end of March, as agreed during the Summit in Paris. “But this can only be achieved if there is no illegal military hardware in the zone,” he said. He also stressed that the OSCE Special Monitoring Mission (OSCE SMM) needed to get around the clock access as a “key condition for the successful implementation of the Minsk Package”.

On this particular point, OSCE Secretary General Thomas Greminger also took the floor at the townhall meeting. He was happy to note the recent positive dynamic in eastern Ukraine, including the repair of the Stanitsya Luhanska Bridge, the successful disengagement from three areas in eastern Ukraine, as well as the exchange of detainees.

He also briefed about the work of the OSCE SMM, including the Mission’s work on negotiating windows of silence and local ceasefires. He said that the OSCE would “do its utmost to increase its monitoring capacities” in order to comply with additional tasks given to the Mission by the Normandy leaders at their summit in Paris.

These include the expansion of the mandate of the OSCE SMM to 24/7 monitoring, including strengthening the SMM’s night-time capabilities in terms of manpower and technical means.

On this particular point, Greminger told the SHR Monitor in Munich, that he had requested a 10% increase in the budget of the OSCE SMM in order to comply with additional tasks. This budget increase is currently under negotiation by OSCE participating States in Vienna. “Of course, nothing is guaranteed, but given the current atmosphere, I am confident that things will turn out just fine,” he told the SHR Monitor.