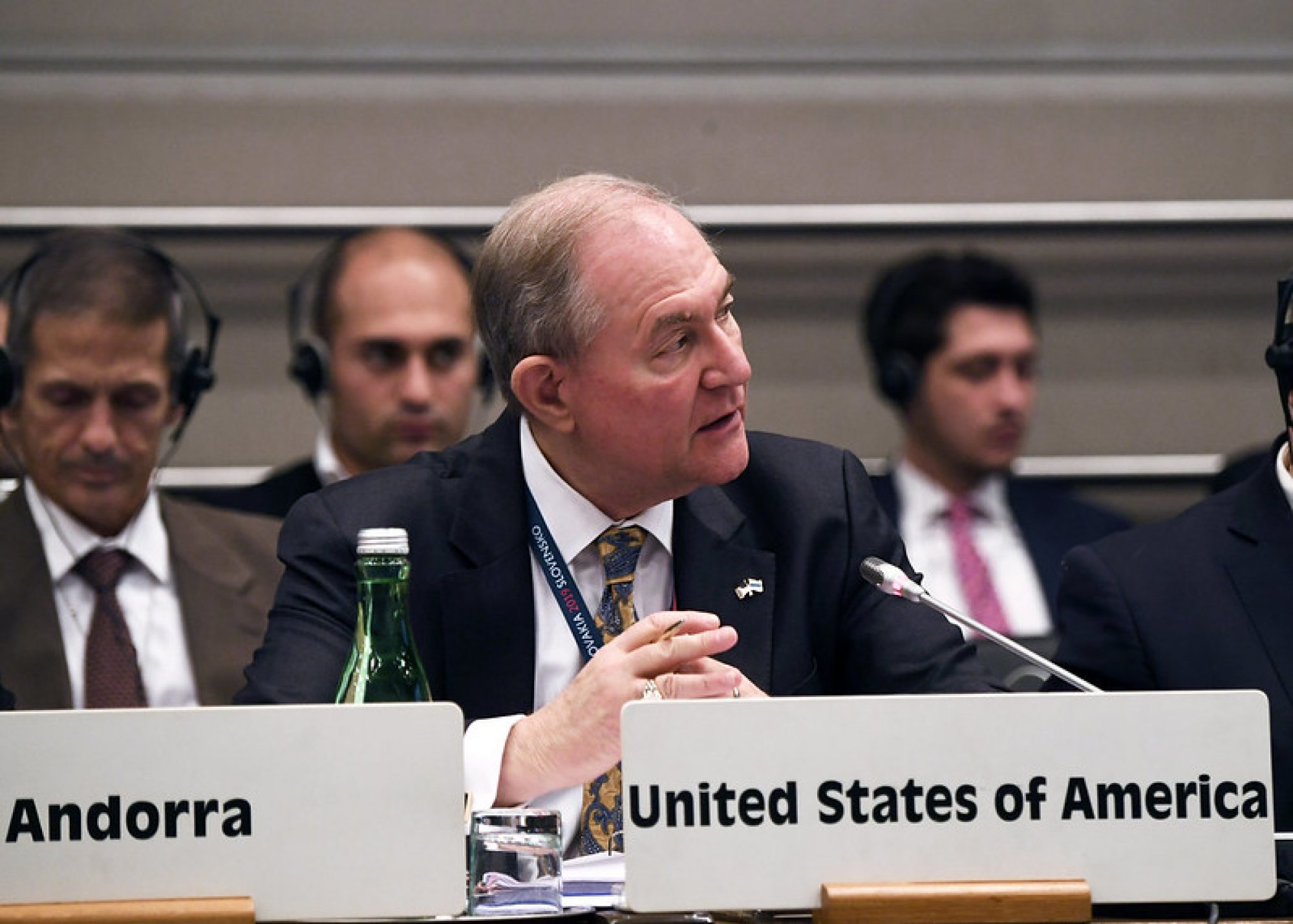 “The U.S. withdrawal from international treaties is a myth”

In this interview, the United States (U.S.) Ambassador to the OSCE, James Gilmore III, talks about strategic priorities of the U.S. in the OSCE context and explains the U.S. national security strategy with regard to multilateral institutions and treaties. He also answers questions about the intended U.S. withdrawal from the Open Skies Treaty, and provides his views on the current leadership vacuum in the OSCE.

SHR Monitor: What are the strategic priorities of the U.S. in the OSCE context? Do you feel that the OSCE gets the attention it deserves in Washington?

James Gilmore: I think the OSCE deserves more attention in the general public and in the U.S., but also elsewhere in the OSCE region, including for example in Russia. The OSCE is a major organization of 57 participating States and it plays an important role in the security of the Northern Hemisphere.

Of course, there are other multilateral organizations that are better known, such as NATO or the European Union (EU). But the OSCE is unique in the sense that it is based upon international security, diplomacy and relations between very diverse countries.

The OSCE includes a variety of countries such as the U.S., Russia, France, and the United Kingdom, which just withdrew from the EU. In addition to that, it contains all the Baltic states, the Balkan states, and Central Asian states. So, in my view, the interactions that take place within the OSCE among all of those very diverse countries, are virtually unique.

What are the strategic priorities of the U.S. in the OSCE context?

We have a very sizeable diplomatic mission here in Vienna and the U.S. is very committed to the OSCE. We participate in everything, we are financially supportive, we contribute to the field missions, to OSCE projects, and we are constantly talking to our allies, but also to those States with whom we don’t agree with.

Furthermore, the OSCE is also a place for me to talk directly with Russia.

In general, our focus is to play a major role in the international politics of the Northern Hemisphere through the OSCE. Here in Europe we helped to provide stability and to encourage countries to live up to the commitments they made within the OSCE context, especially those contained in the 1975 Helsinki Final Act.

In addition, the OSCE deals with major conflicts in Europe. The OSCE monitors those conflicts and helps to resolve them via negotiation and diplomacy.

First and foremost, I am referring to Ukraine and the Russian purported efforts to take over the Crimea. The OSCE is engaged in Ukraine with a large monitoring mission that helps to keep down the conflict.

The OSCE is also engaged in Nagorno-Karabakh, Moldova, and Georgia. It helps to prevent those conflicts from escalating further. In general, I would say that the OSCE is a place where conflicts and challenges can be aired out in order to resolve them, or at least a place where they can be prevented from getting worse.

How is the U.S. engagement in the OSCE context compatible with an apparent lack of trust in multilateralism in Washington? The U.S. has withdrawn from a number of international treaties and organizations in the past few years. How can this be explained?

The national security strategy of the Trump Administration contains an explanation of the value of multilateral organizations.

So, I think that the issue of U.S. withdrawal from multilateral organizations is more of a myth than anything else. It is not really true.

But just take a look at the recent U.S. withdrawal from the Intermediate-Range Nuclear Forces (INF) Treaty, the Paris Climate Accord, the World Health Organization, or the Open Skies Treaty. Of course, I realize that those are all very specific and diverse cases, but still they are all facts on the table. Those examples all signify withdrawals from treaties or organizations.

As a result, the U.S. decided that it is not going to adhere to the Treaty on our side, while we tolerate violations by Russia.

So, the point is that the world has changed. Russia has moved away from working with the U.S. as partners and friends. Unfortunately, this policy has been reversed. Under President Vladimir Putin, Russia has become more aggressive and seems to be trying to gain a military advantage. The U.S. is simply not going to tolerate that.

Still, there seems to be a pattern when looking at the many withdrawals from international agreements.

There is pattern. The pattern is that the U.S. is reviewing all of the institutions and treaties, based upon the current circumstances of today’s world.

One other example would be the New START Treaty negotiations. We insist that China becomes part of the Vienna negotiations because China is part of the international situation on nuclear weapons. We simply cannot ignore those facts.

On the Open Skies Treaty, is there anything that you can see happening in the next few months – before the withdrawal takes effect – that will make the U.S. reconsider its decision?

Russia has to return to a spirit of cooperation and mutual security. At that point, a reassessment might be done.

But if there are constant efforts to violate the Treaty in order to gain a military advantage, and to use the Treaty to target rather than to observe, then it does not make sense. Such a behavior tells the U.S. and its allies that Russia has malign intentions.

Do you understand some of the concerns of European NATO states? For them the Open Skies Treaty is an important trust-building tool with Russia, but also an intelligence gathering tool.

First of all, the Open Skies Treaty is understood to be a confidence-building tool. But it isn’t doing that. As a result, for the safety of our country and of our allies, we had to take action to return Russia back into the spirit and letter of the Treaty.

As a result, we had to take action based upon the trends that we are seeing. To ignore those trends could potentially be leading to a conflict in the future. We really want to avoid that.

Taking up a different topic, I would like to ask you about the U.S. position on the failed reappointments of the four OSCE leadership positions, including the Secretary General. Do you fear a leadership vacuum at the head of the OSCE?

The U.S. endorsed extending the terms of all four incumbent OSCE Heads of Institutions. This would best ensure leadership stability at the OSCE during the challenges of the COVID-19 pandemic. Unfortunately, as you know, consensus among all 57 States was not possible.

The Albanian Chairmanship also tried to secure a temporary extension for all four leadership positions, just to keep them in office until after the OSCE Ministerial Council meeting, scheduled to take place in Tirana in December. Unfortunately, this effort also failed and the leadership had to step down at the end of their terms on July 18.

We look forward to supporting the Albanian Chair’s efforts to identify and appoint new qualified leaders who are committed to the principles of the Helsinki Final Act and who can work with States to address States’ security interests across the OSCE region.

While the U.S. would have preferred to renew, or extend the incumbents, and expressed no objections to any of the reappointments, we do not view the OSCE as being in any kind of crisis. The organization will continue. The OSCE Special Monitoring Mission to Ukraine will continue to monitor. The thirteen field missions will continue to operate. The OSCE Chairperson has issued a letter appointing Deputies to operate the four institutions with leadership vacancies. The Permanent Council will continue to meet. The diplomacy, program, and commitments of the OSCE will continue, pending new leadership selection.

As a final question, will the U.S. invite the OSCE to observe the U.S. Presidential election in November?