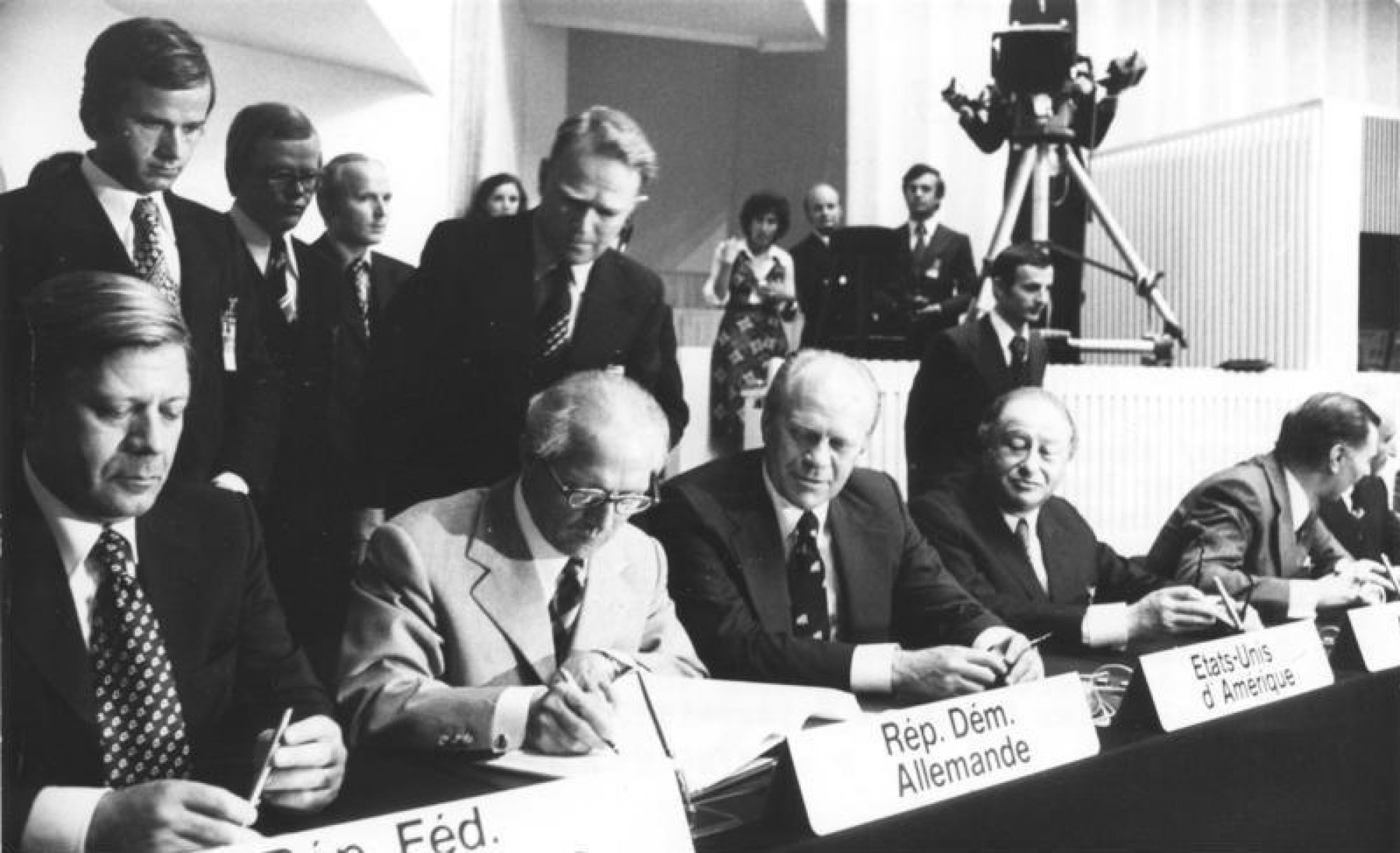 The Spirit of Helsinki at 50: Contemplating Commemoration

Discussions on how to mark the 50th anniversary of the signing of the 1975 Helsinki Final Act in 2025 have begun to gain momentum. Noteworthy proposals include an OSCE Parliamentary Assembly (PA) initiative, a civil society initiative by the Netherlands Helsinki Committee and the Andrei Sakharov Research Center for Democratic Development, a report commissioned by the German Federal Foreign Office, authored by Wolfgang Zellner with input from OSCE scholars and diplomats, as well as a developing initiative from Finnish President Sauli Niinistö.

Both President Niinistö’s and Zellner’s proposals suggest a summit meeting in 2025. Each proposal attempts to harness historical memory of cooperation during the times of the Conference on Security and Cooperation in Europe (CSCE) to deescalate conflict in global and international politics. Yet each enterprise sets slightly different parameters for a potential conversation. President Niinistö frames his initiative by using the metaphor of reviving the Spirit of Helsinki, while Zellner uses the rhetoric of building a New Helsinki Consensus.

In their original conceptualizations, there were two main differences between Zellner’s and President Niinistö’s recommendations. Both proposals use the Helsinki Final Act’s 10 founding principles, known as the Helsinki Decalogue (or simply Decalogue), as a foundation for their proposals. However, they have slightly different perceptions on how the Decalogue should be discussed leading up to 2025. Secondly, the proposals initially differed with regard to the forum for a potential 2025 summit: the OSCE or some external format.

If developing proposals for a 2025 summit continue to mature with different parameters and distinct end goals, the political power of the 50th anniversary of the Helsinki Final Act may be split. Only by initiating an open and public conversation on existing proposals within the OSCE community and with other interested parties can competition over commemoration be avoided and political memory of the Helsinki Final Act be adroitly utilized.

How and whether to discuss the Helsinki Decalogue

The first conceptual difference in President Niinistö’s and Zellner’s ventures is how they understand the Helsinki Decalogue and what they deem open for discussion.

President Niinistö argues that “contested norms make it increasingly difficult to arrive at a consensus…The problem is the violation of the Helsinki principles, not the principles themselves. The Helsinki Final Act is a tried and tested blueprint for comprehensive security, and it must not be opened up for revision”.

Zellner’s report largely agrees with this perspective but significantly highlights a need to open a conversation on contested norms as a way to find a New Helsinki Consensus. Niinistö also sees dialogue with “adversaries and competitors” as a key to reviving the Spirit of Helsinki, but does not believe that there is a need for dialogue in relation to the Decalogue, i.e. opening up the key principles for negotiation.

Disputes over how to handle Decalogue violations resumed following the illegal 2014 Russian annexation of Crimea. OSCE scholars argued that the Helsinki Principles were severely damaged. The OSCE Parliamentary Assembly stated that if the Decalogue survived Ukraine, it would emerge “in a greatly diminished form”.

Numerous OSCE states charged the Russian Federation with breaking principles I, III, V, and VII (sovereign equality, respect for the rights inherent in sovereignty; inviolability of frontiers; peaceful settlement of disputes; and respect for human rights and fundamental freedoms). The Russian Federation claimed principle VIII (self-determination of peoples) in defense of its actions.

Arie Bloed argued that Western countries in their strategy to engage Russia and minimize conflict after 2014 were “willing to compromise about these very Helsinki principles”. The Ukraine crisis illustrates that shifting interpretations of the Decalogue are similar to a tango: both violator and enforcer play a role in how each side comes to interpret the power of the principles.

President Niinistö’s and Zellner’s outlooks highlight differences among Western leaders and academics over how to engage dissimilar perspectives. Should the Helsinki Decalogue have one final interpretation or should different interpretations of OSCE norms be properly discussed to re-strengthen their applicability, as was the premise in 1975?

Zellner proposes as part of his 2025 agenda that “violated OSCE norms continue to matter and can be re-strengthened by being properly discussed”. Alternatively, President Niinistö’s position seems to reflect what Zellner described as existing sentiment among Western leaders that “starting a dialogue on norms would lead to negotiations in which OSCE principles and commitments would be watered down”. To this Zellner responds, “if OSCE commitments are not discussed, their relevance is likely to decrease further”.

Is the Spirit of Helsinki leaving the OSCE?

Reviving the Spirit of Helsinki has been a major OSCE talking point over the past twenty years, partially to remind actors of what was accomplished in the 1970s during Détente. The Spirit of Helsinki was invoked to frame discussions about the future of the OSCE for the 30th, as well as 40th anniversary of the Helsinki Final Act.

Finnish decision-makers have often utilized the Spirit of Helsinki to conjure up the historical memory of 1975 and Finnish foreign policy accomplishments. This rhetoric helps fortify Finland’s positive image as a peace mediator and the credibility of Finnish-led initiatives. A non-OSCE summit in 2025 as seen in President Niinistö’s current proposal would allow Finnish foreign policy priorities—such as arctic issues and climate change—to take a more central role.

Although President Niinistö acknowledges that 2025 can be used to “improve the capacity of the OSCE”, his original agenda clashed with the perspective of a New Helsinki Consensus due to the role each ascribed to the OSCE for 2025. Zellner argues for an OSCE summit in 2025 in an attempt to reverse the trend of the OSCE as “one of the most underused resources for Euro-Atlantic and Eurasian stability and security.”

Defining a Helsinki Spirit for the 21st century

The basic question of the OSCE’s purpose remains prevalent. How should the Helsinki Decalogue be discussed? Disagreements on this core question have beset the institution over the past decade, if not longer.

In response, reviving the Spirit of Helsinki has remained the motivational refrain for reform over the past 20 years, though with limited results. To overcome this in 2025, an OSCE Network of Think Tanks initiative should ask decision-makers in OSCE participating States what the Spirit of Helsinki means in practice. This research endeavor could be part of Zellner’s track 1.5 proposal to discuss “the meaning and interpretation of basic OSCE principles and commitments”.

The Finnish offer to take on the 2025 OSCE Chairpersonship is a significant first step to avoid competition over commemoration, but ambiguity over any 2025 summit remains. The OSCE’s 50th anniversary and subsequent 2025 Chairpersonship offer responsibility as well as opportunity. With President Niinistö’s interest, a Finnish Chairpersonship could begin work now and open a conversation to collectively define an OSCE Spirit of Helsinki for the 21st century, if not build a New Helsinki Consensus.

*Bradley Reynolds is a doctoral candidate in political history at the University of Helsinki and an associated researcher with the Academy of Finland project, The Baltic Sea Region and the Post-Cold War Hysteresis (BALTRANS). He researches international history and decision-makers’ memories in Finland and Russia, specifically looking at shifting perceptions of European security in the 1990s and the CSCE/OSCE from a transnational perspective.