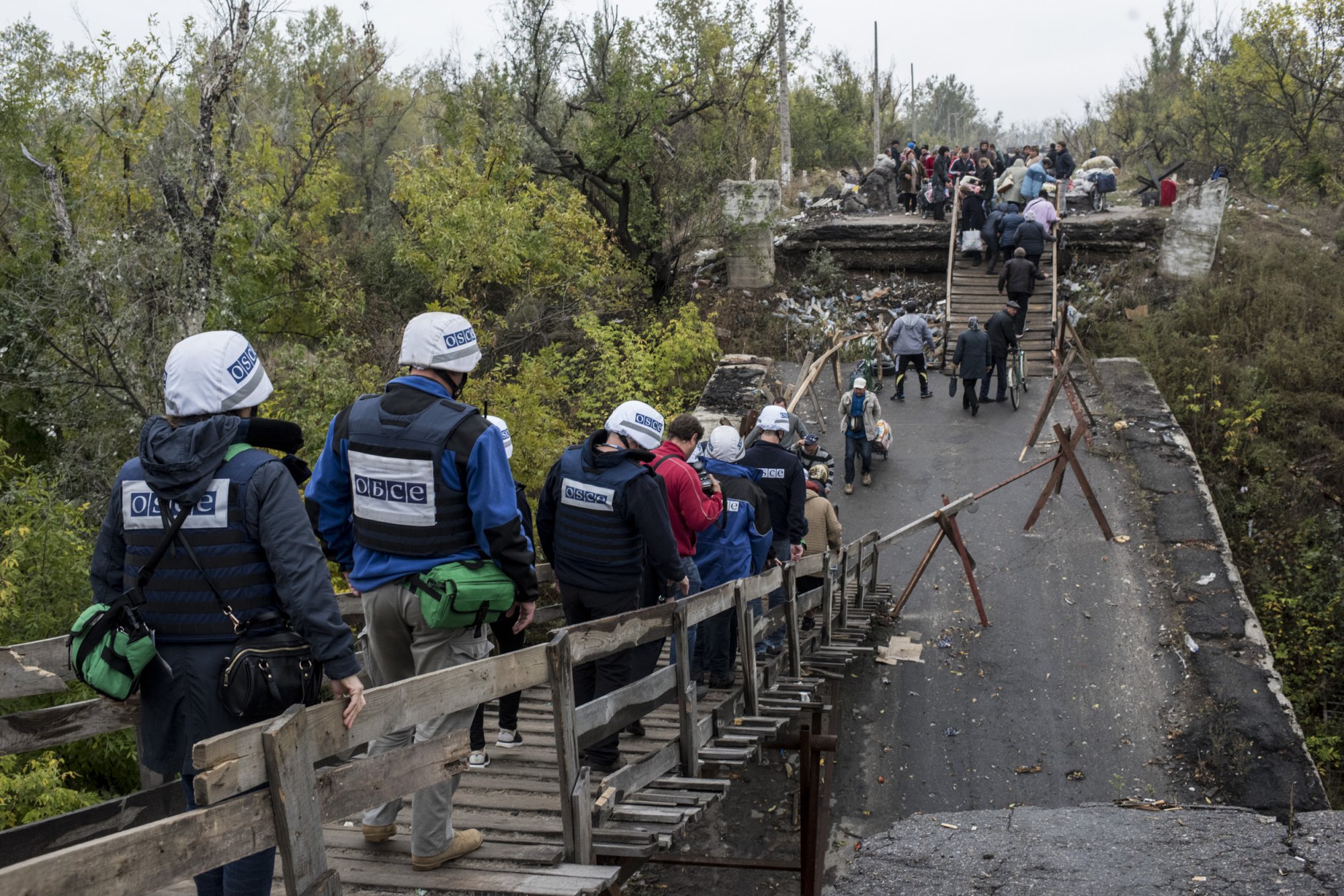 “We do all we can to make this stick”

Mark Etherington, who joined the OSCE Special Monitoring Mission to Ukraine as Deputy Chief Monitor in November 2018, explains in this interview the OSCE’s role in verifying the recent successful disengagement of forces in eastern Ukraine around the Stanytsia Luhanska bridge, which is used by almost 11,000 civilians every day.

Mr. Etherington, you took over the post of Deputy Chief Monitor on 1 November 2018. In your professional career so far, you have seen many conflict and post-conflict situations, from Syria to Iraq, Afghanistan and the Balkans. What was it like for you to settle in Ukraine?

Mark Etherington: Ukraine is not entirely new to me. I was actually here in 2014 during the first six months of the OSCE Special Monitoring Mission (SMM) to Ukraine, when it was set up. When I came back here, I realized that it was useful for me to have seen the roots of this conflict in 2014. It helped me to better understand some of the trajectories that have taken us to where we are now.

In general, I am very struck by the militarization of the conflict, by how many armed people there are now on the ground, and by the size of the forces opposing each other across the line of contact. When I was first here in early 2014, even the sight of a Kalashnikov was rare. Then we very quickly saw heavy artillery, tanks and rocket launchers. The speed at which this conflict has developed is a very striking characteristic.

In the last few days the SMM facilitated and monitored the disengagement of forces and hardware near Stanytsia Luhanska in eastern Ukraine. The actual framework decision of the Trilateral Contact Group relating to this disengagement was singed in Minsk back in September 2016. Can you explain why it took so long for this to be implemented and why disengagement was successful now?

What made the difference is a renewed political impetus. This has had an influence on the negotiations in Minsk and led to a new agreement. But it is one thing to agree on progress on the ground and another to actually execute it. In this endeavour, the SMM had a key role to play, especially in monitoring and verifying the disengagement process.

How does disengagement on the ground actually work? What happens concretely when forces disengage?

The sides had actually provided us with notifications in advance that they intended to disengage. In doing so, they had given us a baseline of the number of troops they had in the area and the weapons they held. We then checked the withdrawal against the baseline.

It actually took about 48 hours for both sides to fully disengage. So, by day two we were able to verify that these military positions inside the disengagement area were vacant. We visited each one of them. Security constraints also meant that we had to use our drones in some areas.

Part of our job now is to verify that the positions remain vacant. Our presence shows that we support disengagement and that we believe in its importance. And our visibility is key to retaining confidence by both sides in the disengagement process.

The disengagement area around the Stanytsia Luhanska bridge has become emblematic of the conflict. Up to 11,000 civilians use the bridge every day. Many of them are elderly, trying to collect their pensions or visiting relatives. The bridge is damaged and there is a lot of hardship involved in the crossing, especially for elderly people. The bridge has become symbolic of the effects of the conflict on the civilians living there.

But disengagement from this area not only has symbolic importance but also practical importance. Because if we can continue the disengagement process and thus carry out bridge repair, we can ease the hardship on the civilians.

Is there already a positive impact for the civilians crossing the bridge now or is this going to take more time?

It is certainly going to take more time.

While military disengagement is complete, there are other steps that still need to be taken. For example, there are still a number of fortifications along the road.

But the separation of forces means that there will be less firing in the area. Also, some demining has taken place and so it is beginning to look more orderly and it has become safer. If we can restore a degree of peace to this area, this symbolic importance is significant.

What does this mean for the wider conflict?

In addition, it would be desirable if the sides could recommit to another ceasefire and we really hope that it will last longer than the previous one, which lasted only for four days.

I thought that disengagement around Zolote and Petrivske had already taken place in October 2016?

It is correct that there was disengagement from Zolote and Petrivske in October 2016, but there has been reengagement, unfortunately. The forces re-entered the area. As you know, we as a monitoring mission cannot hold ground. We simply oversee the disengagement area and liaise with the sides and encourage them to stick to agreements.

Do you think that the current disengagement will be durable and sustainable?

We very much hope so. We are working extremely hard to make it happen. The SMM has been working long hours to retain visibility around the bridge and to make sure that we are seen and available to the sides to discuss any issues that might arise. Confidence is a delicate thing.

And don’t forget, already this year there have been 65 civilian casualties, including 6 injured children. The imperative for us to do all we can to make this stick and to replicate it elsewhere is a powerful one.