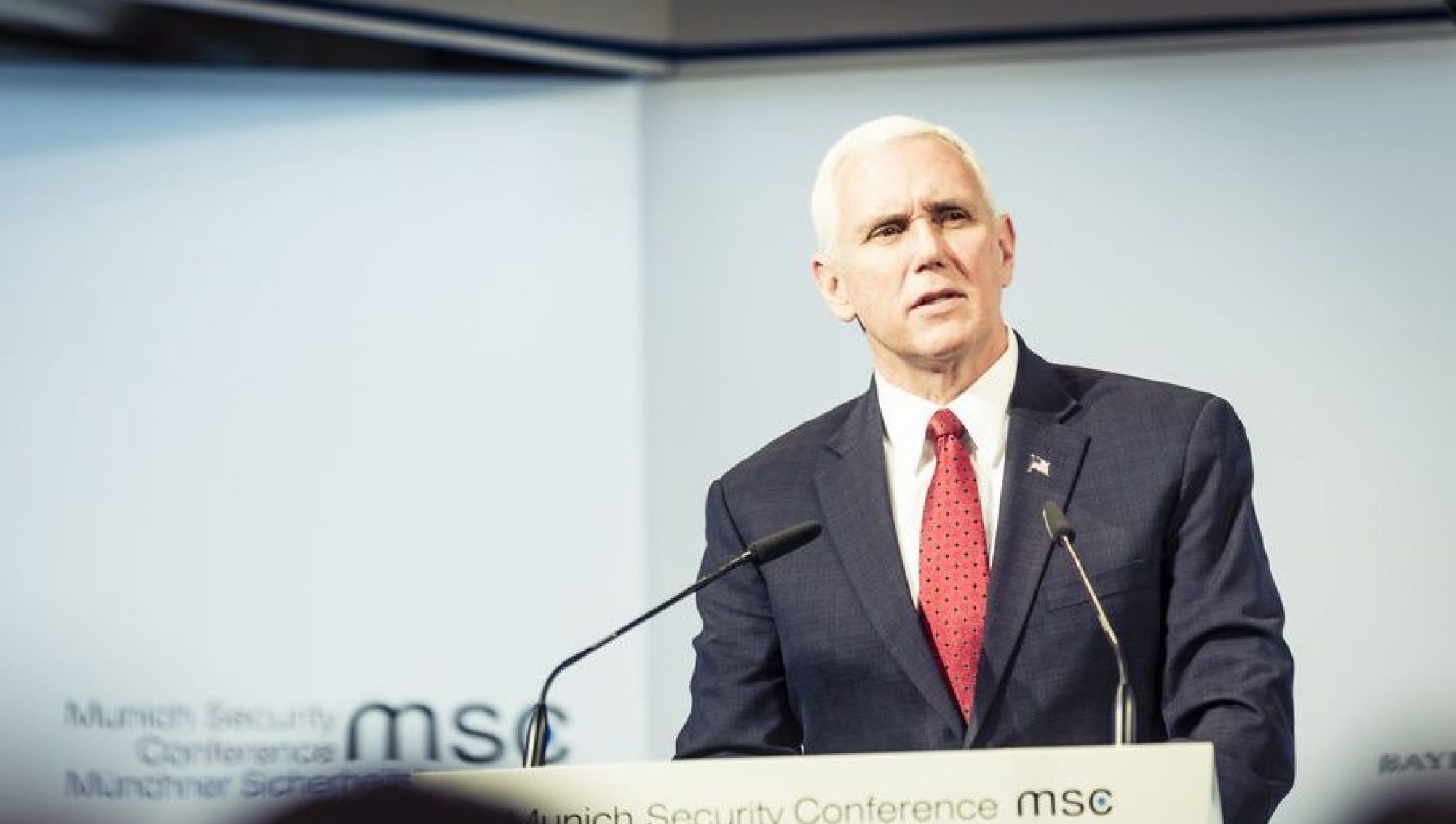 The Security and Human Rights Monitor was on the ground at the 2017 Munich Security Conference, providing readers insights into the debates and topics.

On the second day of the Munich Security Conference, United States Vice-President Mike Pence delivered a speech to a packed conference hall filled with Presidents, Ministers, diplomats, foreign policy experts and journalists, all eagerly awaiting some clarity about the new United States (US) administration’s views on pressing foreign and security policy issues.

At the outset, the Vice-President stated: “Today, on behalf of President Trump, I bring you this assurance. The United States of America strongly supports NATO and will be unwavering in our commitment to this transatlantic alliance.” At this point the hall erupted into spontaneous applause. A sense of relief could be felt as European leaders had been worried over the course of the last months about whether the new Trump administration would continue to value NATO, in light of Trump’s previous comments during the election campaign that NATO is “obsolete”.

Stressing the close US-EU relationship, Vice-President Pence reminded conference participants of past tragedies that had bound Europe and the US together. He spoke of the US sacrifices in the first and second World Wars, and referred to the shared defeat of Communism. In a display of high emotion, Vice-President Pence also told the audience that he would never forget European solidarity in the wake of the 9/11 terror attacks. “With the smoke still rising from Ground Zero and the Pentagon, the strength of our alliance shown forth.” He also said that he witnessed first-hand the wall of flowers surrounding the American Embassy in Berlin, an image that he said will forever be etched in his heart and mind.

In the first major foreign policy speech of the Trump administration, Vice-President Pence announced that the US is developing plans for significant increases in military spending in order to ensure that “the strongest military in the world is stronger still”. At the same time, he told the audience that “Europe’s defence requires your commitment, as much as ours.” He referred to Article 3 of the NATO Founding Treaty, in which allies commit to contribute their fair share for the common defence. He also referred to the commitment made at the 2014 NATO Wales Summit, where NATO member states promised to move towards a minimum security spending of at least 2 percent of their GDP on defence within a decade. Since to date only the US and four other NATO member states fulfil this commitment, Mr. Pence stressed that “the promise to share the fair burden of our common defence has gone unfulfilled for too many for too long”, adding that “the US expects the allies to keep their word.”

At this point it must have dawned on many that the “unwavering support” of the US for NATO might be based on the condition of increased European defence spending.

Regarding Ukraine, Vice-President Pence said that the US would “continue to hold Russia accountable, even as we search for new common ground, which as you know, President Trump believes can be found.” He also called for the full implementation of the Minsk Agreements.

Speaking before Vice-President Pence, German Chancellor Angela Merkel vowed Germany’s commitment to implement the 2 percent target but also hinted that it would be difficult to achieve an increase in military spending every year. She also noted that other activities such as investing in education and development aid or accepting and integrating refugees into society also should be considered as contributing to enhancing security. Regarding Ukraine, she emphasized the need to uphold the principle of territorial integrity, which has served as the basis for peace in post- World War II Europe. She received the longest applause on that day.

NATO Secretary General Jens Stoltenberg agreed with Vice-President Pence that all NATO allies needed to contribute their fair share to the alliance by increasing their defence spending. He also emphasised that NATO and the EU are not competing with each other but rather complement each other.

In a similar vein, Federica Mogherini, the EU High Representative for Foreign Affairs and Security Policy, stressed that the EU was ready to do more with regard to its own defence capabilities, and plans to put in place a defence fund to encourage defence cooperation among EU member states.

Hence, while it seemed possible during the US election campaign that Donald Trump would embark on a pro-Russian course once elected President, the tide seems to have turned now for Russia, whose Foreign Minster sat in the front row of the main conference hall, listening to the speeches.

With European allies under pressure to increase their military spending, and the US embarking on a course of military reinforcement, Russia is now faced with the likelihood of an even stronger NATO in the vicinity of its borders. While it still remains unclear whether all European NATO members will actually all be willing and able to reach the target of spending 2 percent of their GDP on defence, there seemed to be a broad consensus at the Munich Security Conference among the speakers that European NATO members needed to shoulder greater responsibility.

This begs the question whether the world could be entering a new arms race, with Russia over the past years also engaged in significant military reinforcement. This could be particularly dangerous as Europe is lacking a conventional arms control regime ever since Russia’s 2007 suspension of the Treaty on Conventional Armed Forces in Europe.

In addition, Russia might come to the conclusion that NATO is becoming an even greater threat to its national security. Such a scenario should be avoided. Instead, readiness for dialouge should be emphasised by the West.

Picking up on some of this, Konstantin Kossatschew, the chairman of the foreign affairs committee in the Russian Parliament who sat in the audience, questioned Stoltenberg’s reference to European security as a whole as in his view NATO did not represent the security interests of all European countries. Instead, Kossatschew considered other organizations such as the OSCE and also the Council of Europe to be better fora for discussing European security.

Similarly, Russian Foreign Minister Sergey Lavrov argued for a “post-West” world order and stressed that “the US cannot be the only power”. He voiced strong opposition to the continuous spread and expansion of NATO and said that the defence alliance is gridlocked in Cold War thinking. He called for pragmatic relations between the US and Russia, based on mutual respect.

Hence, it became apparent that confrontation between Russia and the West endures, and talks of increased military spending in the US and the EU might only lead to an increase in tensions.

In order to counter this, the OSCE could be used as a forum to increase confidence between Russia and the West. On the basis of a mandate adopted at the 2016 OSCE Ministerial Council meeting in Hamburg, that calls for launching a structured dialogue on European security issues, Russia could be included as an equal member at the table in the security conversation. Topics such as mutual threat perceptions, military doctrines, military force postures and eventually the issue of conventional arms control could be discussed in this structured dialogue, which could thus serve as a confidence- and security-building measure in times of great uncertainty and military build-up.

As evident at this year’s Munich Security Conference, some may think that deterrence is necessary. But so is détente. If there is going to be a two-track approach, the role of the OSCE needs to be taken more seriously.