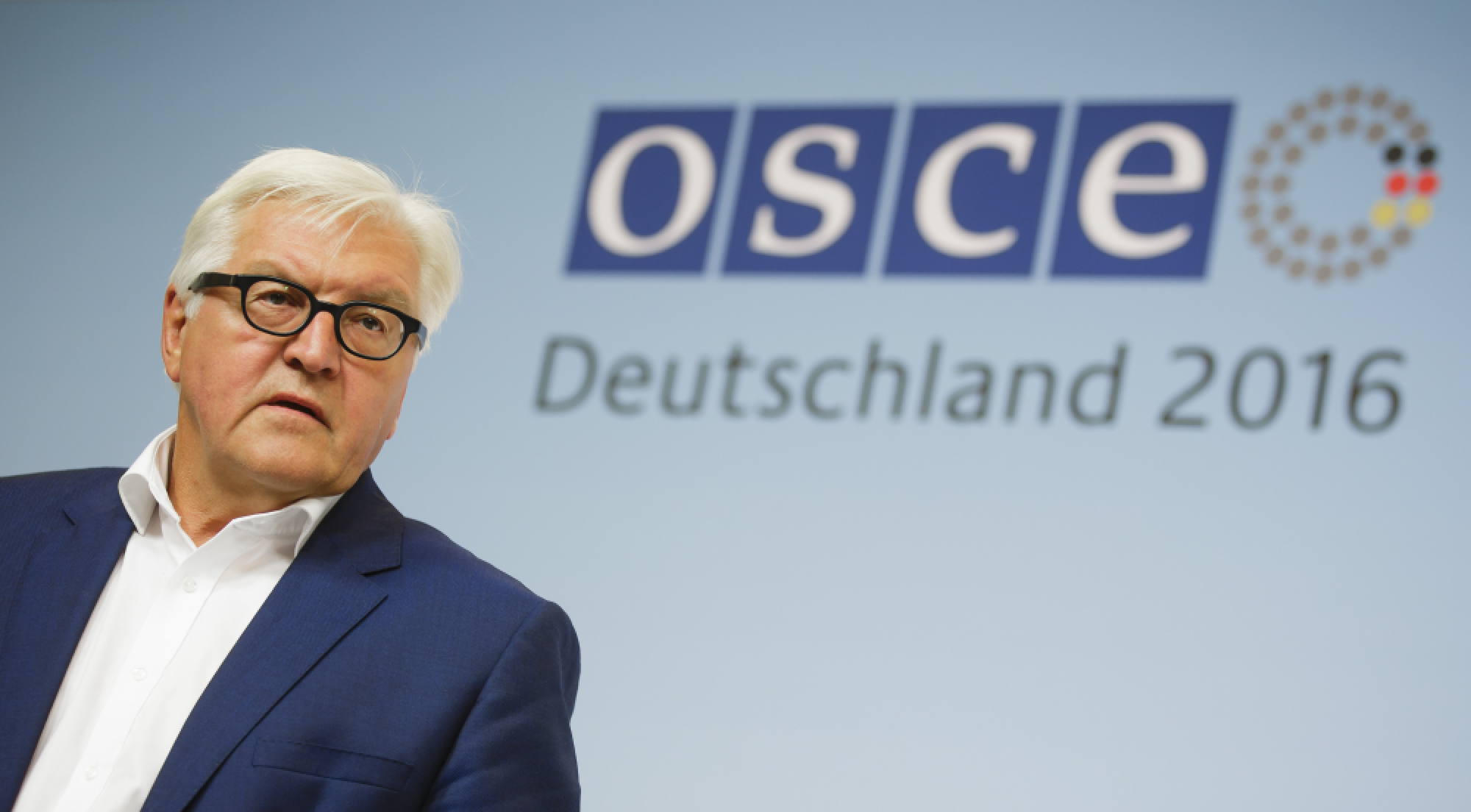 In this written interview, Foreign Minister Steinmeier talks about the topics that will dominate the OSCE Ministerial Council meeting that will be held in Hamburg on 8 and 9 December. He also shares his views on arms control as well as on the crisis in and around Ukraine, and explains how the OSCE can help to manage and diffuse that crisis.

SHR Monitor: Foreign Minister, at the beginning of the year you addressed the OSCE Permanent Council in Vienna for the first time in your capacity as OSCE Chairperson-in-Office. In your address you mentioned “renewing dialogue, rebuilding trust and restoring security” as your top priorities. Today, 12 months later, would you say that your main goals have been achieved?

Frank-Walter Steinmeier: The security situation in Europe is extremely tense. For the first time since the fall of the Berlin Wall, Europe’s security is under threat again. In a situation like this, the OSCE, as the largest regional security organization in the world, is absolutely essential. It offers a unique forum for dialogue and confidence-building between East and West.

This role has been especially important in the past year: The OSCE has taken on two very important functions in dealing with the conflict in Ukraine, namely the monitoring of the contact line undertaken by the Special Monitoring Mission (SMM), and mediation between the separatists and the Ukrainians in the Trilateral Contact Group – for example in connection with brokering a deal for the exchange of prisoners, reconstructing bridges, and determining areas for a withdrawal of troops and weapons. The mediation of the OSCE was also required this summer, when the conflict in and around Nagorno-Karabakh flared up again. I strongly believe that renewing dialogue, rebuilding trust and restoring security played a crucial part in all of these events.

SHR Monitor: For the next two days you will host the OSCE Ministerial Council meeting in Hamburg. What concrete outcomes do you expect and what are the main topics that will dominate the debate among ministers?

Frank-Walter Steinmeier: First of all, it is good news that almost all the Foreign Ministers of the OSCE participating states have announced their intention to attend the Ministerial Council in Hamburg – we all know that this has not always been the case in years gone by! The Council will give us the opportunity to deal with the big questions that Europe is dealing with at the moment: That includes the conflict in and around Ukraine, but also new initiatives for conventional arms control and the role of the OSCE in the prevention, mediation and follow-up of conflicts. I hope that this year’s Ministerial Council will send a strong signal to all participating states: we urgently need the OSCE in the future to jointly overcome global challenges, prevent violent confrontations and solve existing conflicts.

SHR Monitor: The crisis in and around Ukraine has dominated the OSCE agenda for the past three years. At the last meeting of the Normandy Format, held in October of this year in Berlin, a roadmap was agreed upon to help break the stalemate with regard to the implementation of the Minsk Agreements. How is work on the roadmap progressing?

Frank-Walter Steinmeier: It is no secret that the progress in the implementation of the Minsk Agreements has actually been very slow – especially with regard to the security situation. However, without a lasting ceasefire, I do not see any chance of progress in the political process, either.

Our last Foreign Ministers’ meeting in the Normandy format in Minsk clearly showed this difficulty. We did manage to move forward in some respects. The sides have agreed to grant the International Committee of the Red Cross (ICRC) full access to all prisoners, in order to prepare a prisoner exchange that will hopefully take place before Christmas. Concerning the disengagement of troops, however, both sides still seem to be buried in their trenches and unable to move.

I did, however, take away one important thing from our meeting in Minsk. Both sides, Kyiv and Moscow, have stated clearly that they want the mediation process in the Normandy Format not only to be continued, but actually to be finalized and brought to a solution. That is a hopeful sign.

SHR Monitor: Would it be wise, in your opinion, to send an armed OSCE police mission to eastern Ukraine to help ensure the security of future local elections in Donbass?

Frank-Walter Steinmeier: Such a mission would set a precedent – we have never had an armed OSCE mission, and I daresay it is hard to reconcile with the essence and principle of OSCE missions. Nevertheless, if the two sides ask for such a mission, it is my duty as Chairperson-in-Office to examine the possibility. Of course, all of the OSCE participating states would have to agree to such an endeavour. We would therefore welcome a structured proposal by the sides on the form such a mission should take, so that we can start the coordination process within the OSCE.

SHR Monitor: Foreign Minister, you started an initiative to relaunch a structured dialogue within the OSCE on arms control issues. This is of central importance, given Russia’s 2007 suspension of the CFE Treaty and its opposition to the modernization of the 1999 Vienna Document on Confidence- and Security-Building Measures. In your own words you said you wanted to “try the impossible”. Have you succeeded?

Frank-Walter Steinmeier: In times when the security situation in Europe is strained, we must do everything in our power to mitigate risks and build confidence between Russia and the West. The initiative for a relaunch of dialogue on arms control is exactly that: an attempt to build trust and create transparency where it has been lost. I am glad that many of my colleagues in Europe have expressed their approval for this approach. Together with 14 other states, we have formed a like-minded group and issued a joint ministerial statement, in which we promote an inclusive and structured debate on the future of conventional arms control in Europe. The OSCE is a key forum for such a structured dialogue.

SHR Monitor: Finally, what advice can you give to the incoming OSCE Chairperson-in-Office, Austrian Foreign Minister Sebastian Kurz?

Frank-Walter Steinmeier: Just like Germany last year, Austria is taking over the OSCE Chairmanship in difficult times. One of the issues that will keep us busy in the coming year will certainly be the conflict in and around Ukraine and the role of the OSCE in the monitoring and mediation process. The future of conventional arms control in Europe is another issue that we are confident the new Chairperson-in-Office will continue to focus on. In an organization like the OSCE, continuity is key for successfully implementing an agenda. We are glad that Austria has declared its intention to continue our work, and we will give them every possible assistance in the OSCE Troika.

As a personal piece of advice, I will say this: the OSCE is based on consensus. Any participant, and the Chairperson-in-Office all the more so, has to face a multitude of discussions and coordination processes – sometimes without any concrete outcome other than the dialogue itself. I would tell my successor to “keep calm and carry on” – even if decision-making within the OSCE is a slow and laborious process. I think is worth it!