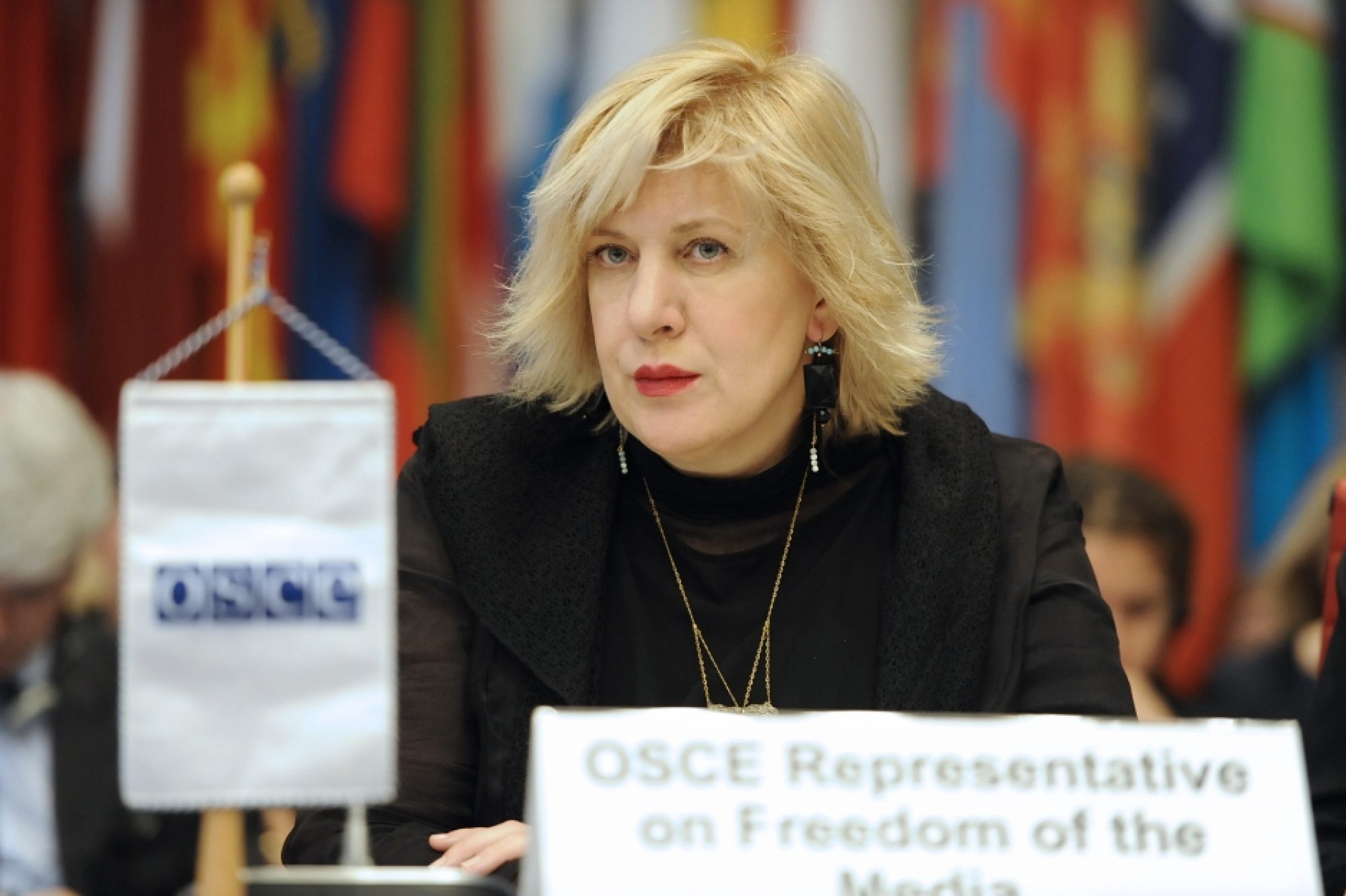 Interview with Dunja Mijatović, OSCE Representative on Freedom of the Media

SHR Monitor: As the OSCE’s Representative on Freedom of the Media you have the mandate to observe relevant media developments in the 57 OSCE participating States and to advocate and promote full compliance with OSCE principles and commitments regarding freedom of expression and free media. How would you describe the current situation of free media across the OSCE region?

Dunja Mijatović: The general situation for free media in the OSCE region is that states are more and more engaged in activities restricting free expression, using different measures. The two major problems I see are the increasing number of attacks on journalists/bloggers and the attempts to restrict free flow of information on the Internet.

The safety of journalists must be ensured at all times, not just for the sake of justice, but also for the sake of democracy. And the fact is that we see more attacks on journalists today than we did five or ten years ago, this trend has to be reversed. And when I say attacks, I include a whole host of actions taken – not just physical assaults. Reporters/bloggers are jailed on dubious charges or held under house arrest simply for not toeing the government’s line.

We have also seen a shift in how members of the media are being attacked and threatened, with the scale of these threats growing in both magnitude and severity. One example is the mounting number of online threats targeting female journalists, who are being singled out and attacked on the Internet, often with threats of rape and sexual violence.

Moreover, the challenges to free media in conflict zones, in particular in and around Ukraine, with regard to journalists’ safety are often compounded with the vicious elements of propaganda used to incite war and hatred.

At the same time, we have to acknowledge that while the Internet, in many ways, has become the new battlefield for free media, it also provides us ordinary citizens the opportunity to easily exercise our right to free expression.

The Internet is frequently under attack in parts of the OSCE region. There are definitely forces in motion that seeks to hinder the advancement of human rights online, making the Internet the new front line in the fight for freedom of expression and media freedom worldwide.

SHR Monitor: Since the attempted coup in Turkey in July, more than 125 media outlets have been closed and 120 journalists detained. This restriction of freedom of the media is alarming. What is your concrete response to this situation, besides publicly condemning the developments in Turkey?

Dunja Mijatović: I remain greatly concerned by the recent measures adopted by the Turkish authorities in the wake of the attempted coup, as several of them constitute a severe crackdown on critical journalists and media outlets. Besides publicly addressing these issues on several occasions, I also continue raising specific issues directly with the Foreign Minister of Turkey, including certain humanitarian cases where I urged the authorities to ensure immediate and appropriate medical attention for all detained journalists reportedly suffering from health problems. The shutdown of media outlets and the arrest of over a 100 journalists stroke a major blow against public debate and government accountability, and I continue to strongly urge the authorities to reconsider these decisions.

Let me also add that there are a number of tools at my disposal to raise issues that pose a threat to media freedom in the OSCE region, the most important tool by far is the Representative’s voice. As the Representative I have the right – and obligation – to speak out about breaches of the OSCE media freedom commitments. And I raise my voice regularly, with public statements and communications with OSCE participating States, on issues such as journalist’s safety and Internet freedom.

One additional example on how we work to improve media freedom in Turkey are the four seminars my Office has organized and hosted for some 160 judges and prosecutors from Turkey in Vienna. The seminars focused on OSCE commitments and international standards on the protection of freedom of expression and freedom of the media, and the importance of the judiciary to safeguard and promote these values.

SHR Monitor: What role does the media play in the conflict in and around Ukraine?

Dunja Mijatović: Like in any democracy, media plays an important role in Ukraine. Let me first say that with the current conflict in and around the country, the media freedom situation in Ukraine continues to be challenging.

One issue that continues to plague modern journalism, and also affects the role media play in the current conflict, is the very difficult situation with propaganda. My firm standpoint is that false and misleading information must be countered and fought with truthful and factual information.

It seems to me that it is clear that actors are deliberately distributing and relaying information that is misleading, and this is happening in mainstream media as well as in social media. (note, please see our communique on propaganda in times of conflict).

Let me also say that there are specific tools that already exist in the area of media regulation for dealing with biased and misleading information. These include rules, in line with international standards on free media and free expression, on balance and accuracy in broadcasting; independence of media regulators; prominence of public service broadcasting with a special mission to include all viewpoints; a clear distinction between fact and opinion in journalism; transparency of media ownership, media literacy, self-regulatory mechanisms, to mention a few.

In order to reverse the deteriorating media freedom situation and to achieve a real and lasting change I believe that all actors, including authorities, media, civil society and the international community have to act jointly. Especially civil society in Ukraine, which is very active and mobilized, provide a voice that is essential to bring about positive changes and reforms that will support greater media freedom.

SHR Monitor: 7 October marked the ten-year anniversary of the killing of Novaya Gazeta journalist Anna Politkovskaya in Moscow, Russia. How would you describe the situation in Russia today, ten years later, with regard to impunity for crimes committed against journalists?

Dunja Mijatović: The number one issue plaguing media freedom in Russia in 2006 – and today – is the rapidly deteriorating journalists’ safety situation. The Committee to Protect Journalists reports that since 1992, 56 journalists have been murdered in Russia in connection with their work and the vast majority of the killings remain unsolved.

This vicious circle of impunity for crimes committed against journalists continues to have a detrimental effect on the media freedom situation in the country. It is unacceptable that 10 years on after the horrific murder of Anna Politkovskaya the masterminds behind her assassination are still at large.

But in addition to the issue of journalists’ safety, media pluralism is at an all-time low with very few independent media outlets. Russian media itself is in dire need of self-examination and a need to cleanse journalism of fear and propaganda. Because in the absence of independent and critical journalism, democracy suffers and deliberate misinformation becomes the standard.

Finally, your mandate was exceptionally extended until March 2017 because the 57 OSCE participating States could not agree on your successor on time. Once your successor does take over, what would your advice be to him or her?

Dunja Mijatović: It will be for my successor to determine his or her own priorities and path. But looking at the current challenges to media freedom, the Office will need to continue to be engaged in safety of journalists in all areas and on all platforms.

Representative on Freedom of the Media Dunja Mijatović of Bosnia and Herzegovina took over the post in March 2010. Mijatović was a founder of the Communications Regulatory Agency of Bosnia and Herzegovina. In 2007 she was elected Chair of the European Platform of Regulatory Agencies. She also chaired the Council of Europe’s Group of Specialists on freedom of expression and information in times of crisis. Mijatović is an expert in human rights; communications and media strategy and regulatory and media policy. She has extensive knowledge of institution-building in transitional states and many years of experience in issues related to journalists’ safety and new media, including digitalization, convergence and the Internet.