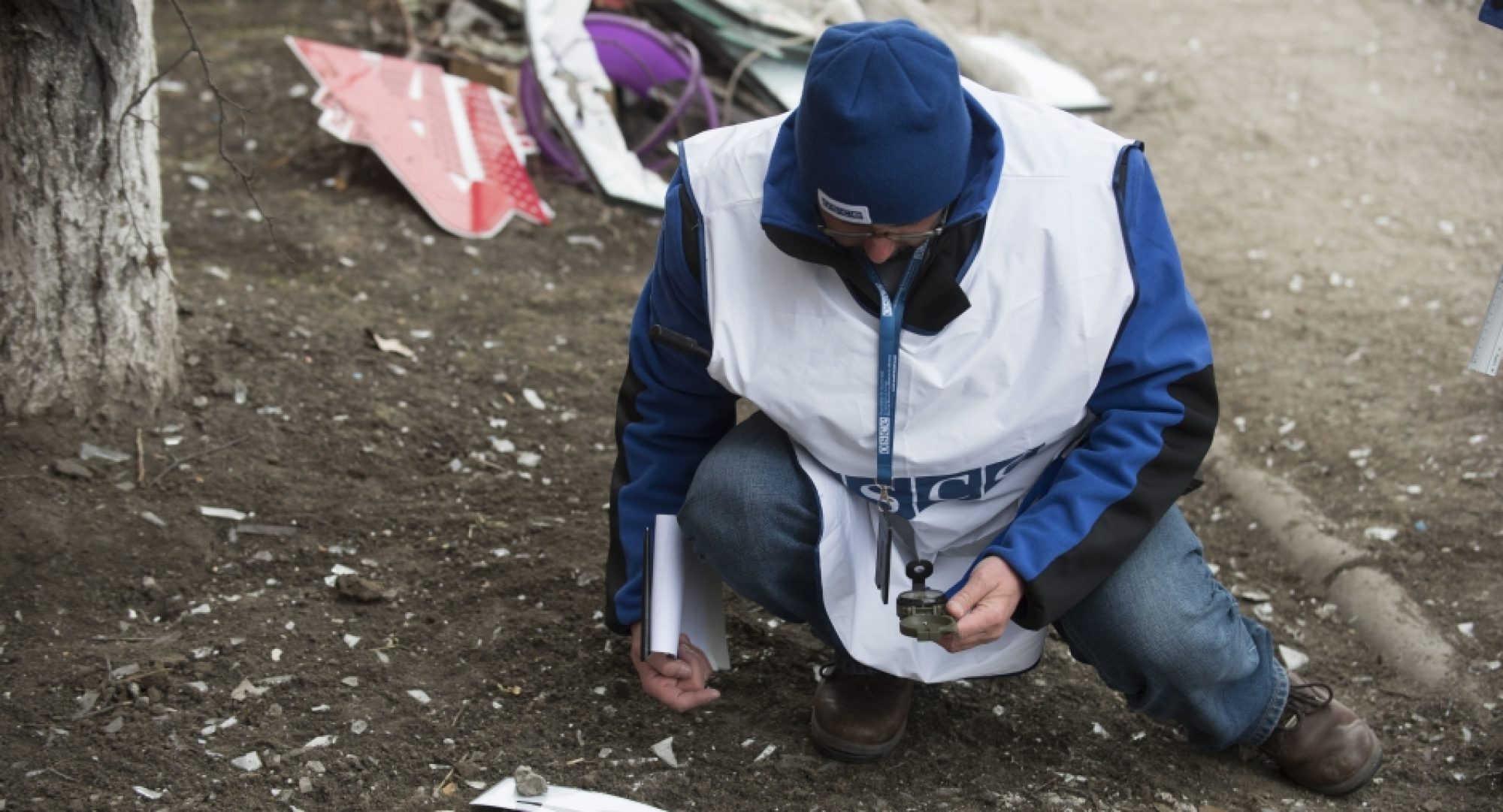 Interview with Alexander Hug: Political will has to be translated into operational instructions on the ground

On 12 February 2015 a package of measures was agreed in Minsk, which serves as an implementation plan of the September 2014 Minsk Agreements. The package of measures was signed by the Contact Group, after the so-called Normandy group of states (consisting of Germany, Russia, Ukraine and France) engaged in marathon negotiations in Minsk in order to bring an end to renewed bloodshed and fighting in eastern Ukraine. The package of measures foresees that two days into the ceasefire, heavy weapons should be pulled out from the zone of conflict in order to create a demilitarized zone. In addition, prisoners of war should be exchanged, foreign armed groups should be withdrawn, amnesty should be granted to all those involved in the conflict, and economic links should be restored between Kiev and the Donbass region. The OSCE is tasked to monitor the ceasefire, the withdrawal of heavy weapons and of foreign armed groups.

An important point of the agreement is the fact that the restoration of full Ukrainian government control over the state border, throughout the conflict zone, will only begin after the holding of local elections in the Donbass and will be completed after a political settlement is reached (by the end of 2015). In other words, Ukrainian government control over the border is made conditional upon granting the Donbass region additional political autonomy.

Into the first week of the ceasefire, the OSCE Special Monitoring Mission (SMM) to Ukraine continued to observe ceasefire violations, especially around the city of Debaltseve, a strategically important railway hub between Donetsk and Luhansk. OSCE monitors were prevented from entering the city. On 18 February Ukrainian President Petro Poroshenko ordered the withdrawal of Ukrainian troops, which were trapped inside the city that was surrounded by rebel forces.

In this interview, Alexander Hug, Deputy Chief Monitor of the SMM states that on 21 February OSCE monitors were able to enter Debaltseve for the first time. He also explains why he believes that additional technological equipment could help the unarmed civilian monitoring mission to perform its tasks efficiently, especially in light of the volatile security situation. In his opinion, what is needed the most though is that political will is translated into operational instructions on the ground.

SHR Monitor: A new ceasefire agreement was signed in Minsk on 12 February 2015. Can you let us know what the situation is like in eastern Ukraine now (21 February) and whether you have observed ceasefire violations?

Alexander Hug: I would like to clarify that there is only one ceasefire agreement. It was reached in Minsk in September of last year. The new package that has been agreed on 12 February of this year is a package for the implementation of the September 2014 document. There is no new Minsk agreement. The OSCE Special Monitoring Mission (SMM) to Ukraine clearly sees that the September 2014 Minsk documents are the only available tools at the moment that can bring back peace and stability to Ukraine, in particular eastern Ukraine.

The situation in eastern Ukraine changes very quickly, and is not stable. The situation may look different already today in the evening. It has to be said that the front line or contact line is very long; in fact it is almost 500 km long. The security zone built around it will be on average 100 km wide, which creates an area as large as Switzerland. That of course explains the enormity of the task ahead and it is clear that it is difficult to hold the fire in an area and on a front line as big and as long as that. We still see violations as we speak, in particular to the east of Mariupol, in and around the airport of Donetsk and sporadically in the northern part of Luhansk, where the contact line is located. That looked different yesterday. Yesterday we also observed fighting in the city of Debaltseve.

SHR Monitor: What does the situation in Debaltseve look like now?

Alexander Hug: A patrol is there as we speak. It is quiet at the moment. The town is heavily hit and affected by the conflict. I will have to wait until my patrol returns to Donetsk to see what the exact findings are. Our findings will be reported.

SHR Monitor: May I clarify: Has your patrol managed to enter the city of Debaltseve?

SHR Monitor: You have already mentioned at the beginning of this interview that there is only one ceasefire agreement. Could you explain the difference between the 12 February 2015 agreement and the September 2014 agreements?

Alexander Hug: The protocol and memorandum that have been signed and agreed on the 5 and 19 September 2014, respectively, lay down the basic steps to ensure that peace and stability return to eastern Ukraine. The package signed on 12 February 2015 is an implementation plan of these steps. It starts with a ceasefire that should have been put in place on Sunday a week ago (15 February). This should be followed – two days into the ceasefire – by the withdrawal of heavy weapons. This in turn should then be followed by various other measures, including the holding of elections, economic recovery, political dialogue etc.

SHR Monitor: What are the ramifications of the new package of measures adopted in Minsk on 12 February 2015 on the OSCE SMM? How will the OSCE SMM adjust its functions? Does the SMM plan to use additional technology in order to monitor the ceasefire?

Alexander Hug: Immediately following the 12 February agreement, we have started to reconfigure. But let me first clarify the following point. I would like to stress here that the SMM operates in eastern Ukraine not based on the Minsk Accords but based on our mandate which was agreed on 21 March 2014 by 57 OSCE participating States. The Minsk Accords foresee tasks that can be carried out under the mandate. Yet, should there be new tasks that are not covered by the mandate we would need a new decision by the OSCE Permanent Council.

Coming back to the SMM’s adjustments, I would like to say that as an immediate measure we have redeployed staff from the western part of Ukraine – where we also have teams – to the eastern part. We have now almost 300 monitors present in eastern Ukraine and another 50 or so are now being prepositioned in Dnipropetrovsk and Kharkiv. We will deploy them to the eastern oblasts next week. That will make up 350 monitors for eastern Ukraine. Another 150 monitors will be split up to work in the remaining eight duty stations all over Ukraine.

Indeed, because of the enormity of the task we are looking into using additional technology. We already use drones and will probably multiply them. The 12 February package of measures also refers to the possible use of satellite imagery. We have made first steps to get access to those images. For example, we can get access to those images through individual OSCE participating States but also through the European Union. We also look into using fixed cameras that can be mounted on satellite-like devices that can hover over certain critical areas. We are also looking into purchasing webcams that can be installed, for instance, on important routes or storage places where withdrawn heavy weapons will be kept.

For the technology to be operated we need additional personnel and we estimate that this will require us to increase our staff by another 50 to 150 people, depending on the kind of technology we will use. We will need for example picture analysts, operators and IT specialists.

SHR Monitor: The OSCE SMM is an unarmed civilian observer mission. Yet, the ceasefire monitoring in eastern Ukraine is in many ways comparable to a peacekeeping scenario that is usually performed by military monitors. Do you think that with the current mandate the SMM can perform its tasks effectively?

Alexander Hug: Yes, I believe that we can perform the ceasefire monitoring with our current mandate efficiently. Given the way the conflict is led and given the size of the area that has to be monitored, it would be equally difficult for another mission with a different mandate to get access to all areas and to gain the overview that is needed.

Yet, what is required now for the SMM to be really efficient is that political will is translated into operational instructions on the ground. The main point is that the ceasefire is observed by all sides. And this is not what we as an OSCE mission demand but what the sides have themselves agreed to. The mission stands ready, we have the equipment. But if the sides are not willing to let us operate, then access to all areas for us is difficult and this prevents us from doing our job properly. It is a dilemma of course and security is the main obstacle. As an unarmed civilian observer mission there are limitations due to security considerations. But we try to remedy this by deploying technological devices that will help us to access areas and monitor areas which we cannot access with staff due to security considerations.

SHR Monitor: Is it correct that you are also trying to recruit more people who have military backgrounds?

Alexander Hug: Yes, this is what we already do. But it is not necessarily a military background that it needed. What we need are people who have previously worked in conflict environments. For example, people who have worked in crisis areas or who have worked for example with the International Committee of the Red Cross (ICRC). Because even if you have a military background, you may not have been exposed to conflicts since most western OSCE participating States don’t actually engage in active war. What we need is the actual experience of conflict not the qualification as such.

You have to understand that the circumstances under which we have to work in eastern Ukraine require being familiar with a risky and depressing environment. For example, you have to be able to save yourself when you are under artillery fire. This can be quite a disturbing experience when you witness it for the first time.

SHR Monitor: Since the SHR journal not only covers hard security issues but also the human rights aspects of conflicts, I would like to ask you about the situation of prisoners of war. Have you had access to them? Does the SMM cooperate with other international organizations or NGOs that can provide for example legal support to them?

Alexander Hug: Yes, we do all of that. To begin with, the SMM has a specific human dimension unit which has its head office in Kiev, but there are also respective officers present in each monitoring team. They cover issues such as human rights, minority rights, dialogue facilitation and gender mainstreaming.

Regarding the detainees, we have all along been facilitating dialogue between the sides to enable the simultaneous release of individuals deprived of their liberty. We don’t work on this alone but together with the ICRC, which by now has established a footprint in eastern Ukraine. We have also adopted some of the rules and operational tools that the ICRC uses regarding the release of hostages or detainees.

In the past, we have also had access to detainees. We were given access to them by the government of Ukraine in the early days when the eastern part of Ukraine was not yet in conflict but was being run over by protesters, some of whom ended up in prison in Kiev. We were given access to them in May of last year. To a lesser extent we have also had access to hostages in direct communication with the rebels. So we are engaging in these activities, in coordination with other organizations, in particular with the ICRC.

SHR Monitor: How and on which issues does the SMM cooperate with local civil society in Ukraine?