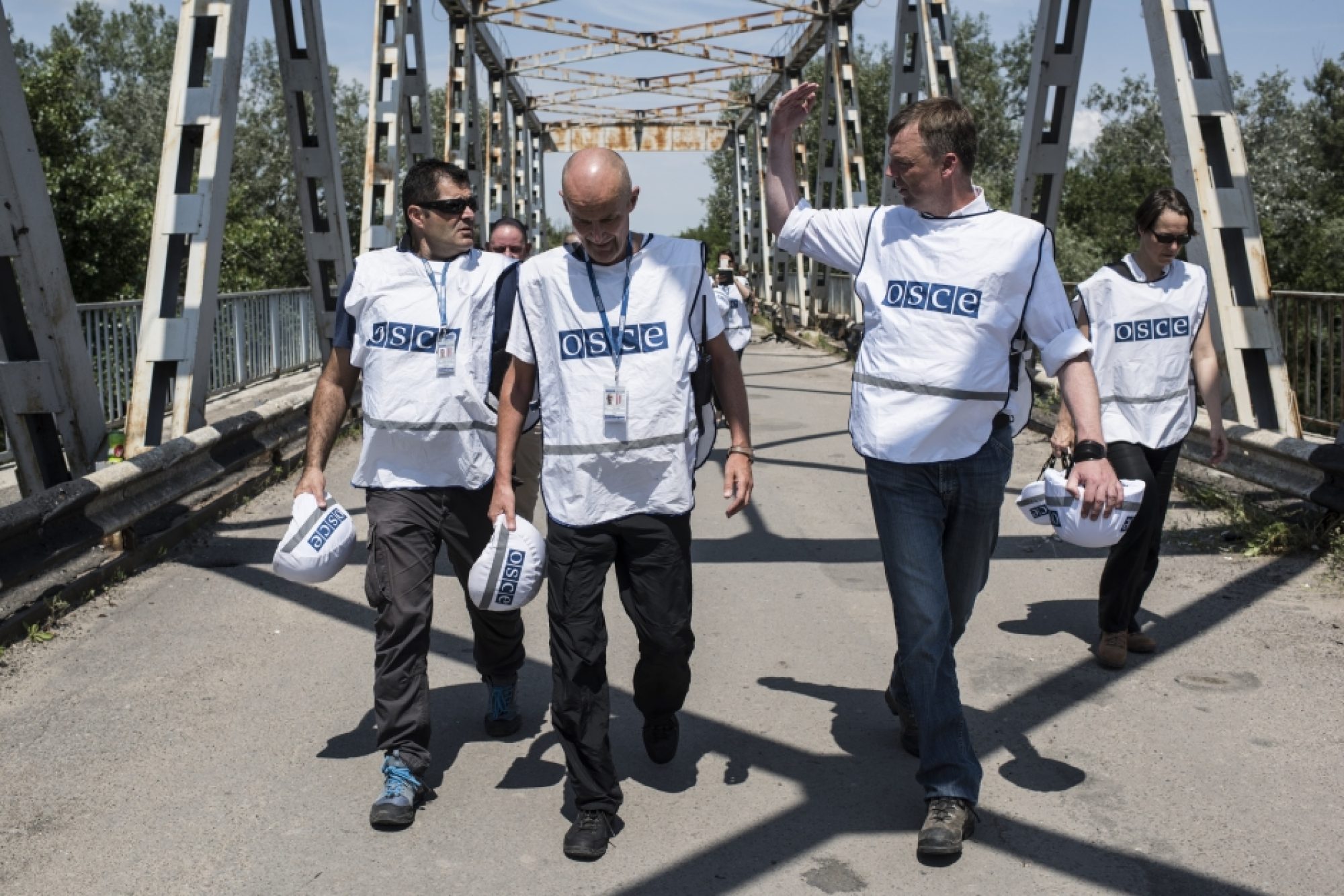 At the Frontlines of Peace: Should the OSCE send Armed Personnel to eastern Ukraine?

In recent weeks, confusing information appeared in the international media on the OSCE deploying armed personnel or an armed OSCE police mission to eastern Ukraine, in an endeavor to ensure the security of possible local elections in the Donbas region at some point in the future. This article stresses that currently there is no indication that a formal agreement on this topic has been reached, and that any form of armed security provider can only be deployed once the 57 OSCE states take a formal decision on this by consensus. It should not be ignored that the single most important precondition for holding local elections in eastern Ukraine is a permissive security environment that enables the OSCE Office for Democratic Institutions and Human Rights (ODIHR) to observe the elections in line with its standards.

In recent weeks, confusing information appeared in the international media (for example on Euronews, Reuters and Ukraine Today) on the OSCE deploying armed personnel or an armed OSCE police mission to eastern Ukraine to ensure the security of possible local elections in the Donbas region at some point in the future.

Although it is true that OSCE participating States and in particular the Normandy Format (Germany, Russia, Ukraine, France) have started debating the options at hand, there is currently no indication that any form of formal agreement on this topic has been reached. The debate has become politicized and as a consequence there is a risk that each side will abuse it to advance its own interests. The debate has also become speculative, to say the least, with the media reporting on options that are simply unrealistic in the current circumstances. Conducting a responsible debate on this topic is particularly important as any misinformation or misinterpretation of the facts by the general public can lead to more instability in eastern Ukraine and increased threats against the OSCE civilian monitors. This was underlined when on 10th June several thousand people took to the streets of Donetsk to demonstrate against an armed OSCE presence.

It is therefore necessary to provide a sense of realism and to put the debate into the right perspective.

Currently, the OSCE has deployed roughly 720 unarmed, civilian monitors in Ukraine, thereof 600 in the Donbas region. The mandate of the Special Monitoring Mission (SMM) to Ukraine was agreed upon by all 57 OSCE states (including Russia, Ukraine, the USA and the EU member states) in March 2014, after weeks of difficult and lengthy negotiations. This was considered a great diplomatic success, especially against the backdrop of heightened tensions created by the illegal annexation of the Crimean peninsula by Russia, which took place during that same month.

The OSCE monitors report on the situation on the ground and contribute to the reducing of tensions by facilitating dialogue. With the adoption of the two Minsk Agreements in September 2014 and February 2015, the tasks of the SMM were further defined to include the observation of the ceasefire, the pullout of heavy weapons, foreign armed formations and mercenaries from the territory of the Ukraine. These are tasks that are typically carried out by a UN peacekeeping mission, which usually consists of armed peacekeepers.

Yet, the OSCE monitors are unarmed. In that sense, they are peacekeepers without weapons.

The prospect of local elections in eastern Ukraine

The holding of local elections in eastern Ukraine is one of the key points contained in the February 2015 Minsk Agreement, which was signed by the OSCE Contact Group, after the Normandy group of states engaged in marathon negotiations in Minsk to bring an end to the bloodshed and fighting in eastern Ukraine.

However, there are several aspects that need to be clarified before such elections can be held. In order for the OSCE Office for Democratic Institutions and Human Rights (ODIHR) to observe elections in line with its standards, the sides will have to ensure a permissive security environment and put in place necessary security guarantees for all OSCE staff on the ground. This would require a complete cessation of hostilities for a substantial period of time prior to the elections and guaranteed access to the entire territory of Ukraine, including Donbas, for OSCE monitors. According to the ODIHR Election Observation Handbook, “[e]lection observation is a civilian activity. Nevertheless, election observation can take place in post-conflict situations, so long as minimum standards for credible election observation are met. This assumes that an appropriately secure environment exists, allowing for a meaningful election process to be conducted and for free, unimpeded movement for election observers.” This unequivocally means that in the current circumstances it is not possible for ODIHR to observe the elections in line with its standards.

It is also currently rather unrealistic that the security situation will change any time soon, as the SMM is reporting on a growing number of ceasefire violations in eastern Ukraine and OSCE monitors continue to face severe restrictions of movement. More dramatically, OSCE monitors have come under small arms fire several times, most recently on 27 May near the line of contact. Furthermore, the SMM’s drones have been downed on several occasions.

Yet, the holding of local elections is a key point of the February 2015 Minsk Agreement and it is a necessary step in advancing its implementation. This implementation is in the interest of all parties concerned. For Moscow, it could mean the relaxation of sanctions, for Ukraine a more stable country, for eastern Ukraine more self-government, and for the West improved relations with Russia.

Therefore, let’s imagine a scenario where the preconditions for holding local elections are in place. In such a case, the parties will have to agree on a general framework for the elections and on some form of armed presence that ensures the security of the elections. What could such an armed presence look like?

Three options for an armed presence

One option would be to aim for a full-fledged armed (UN-type) peacekeeping mission (as part of the SMM or as a stand-alone mission), which would include armed OSCE military personnel. This option is highly unrealistic (and undesirable) for three reasons. Firstly, a number of key players, including Russia and Ukraine, will have problems accepting this option. Secondly, if such a military mission were to become part of the SMM, this option would entail changing the mandate and civilian character of the SMM, which would be a great risk in itself as the civilian character of the mission was one of the main reasons all parties could actually agree to it. Reopening negotiations on the mandate of the SMM to include an armed element could thus involve the risk of losing the mission altogether. Thirdly, the OSCE has been developed as a soft security organization whose power lies in facilitating peace and security through dialogue, cooperation and common action. The idea that the conflict in eastern Ukraine can be solved by means of deployment of OSCE armed military personnel that enforces the peace therefore entirely contradicts what the OSCE stands for.

Another option would be to aim for a stand-alone OSCE armed police mission that would bear the sole responsibility for providing the security of the elections. This second option may entail a whole set of additional challenges, including the question of whether a United Nations Security Council Resolution under Chapter VII would be required. It would also mean agreeing on the rules of engagement as well as the use of weapons and negotiating a new Memorandum of Understanding with the host state (Ukraine). The costs for such an armed police mission would be very high, the police would have to be trained and OSCE states would have to be identified that are willing to deploy policemen. Hence, a considerable amount of time for the planning of such a mission would have to be calculated.

A third option would be to aim for an unarmed OSCE police mission, which could maybe be incorporated into the SMM. In this case, the current limit of 1000 monitors would have to be amended, but the civilian character of the mission would remain intact. This scenario would also mean that an unarmed police mission could not be seen as the main security provider. This role would have to be fulfilled by some other, local security provider, and the OSCE police mission would rather oversee the performance of the local security provider, in line with international police standards. (The OSCE has considerable experience in training and advising local police. Concretely, the OSCE advised and trained police in Croatia in 1998, in the Former Yugoslav Republic of Macedonia in 2001, and developed a police assistance program in Kyrgyzstan in 2003 and in Georgia in 2005.)

While it is necessary to continue the debate on how the implementation of the Minsk Agreements can be advanced and on how the security of local elections (that may be held at some point in the future) can be guaranteed, that debate should not be politicized. It should be conducted in a responsible manner. As the deteriorating security situation on the ground shows, the mere fact that various ideas are being considered triggered growing hostility against the OSCE in eastern Ukraine. Monitors are increasingly being intimidated and they are facing restrictions of movement.

Whatever the (armed) security provider will look like, it will have to receive the support of all sides of the conflict and it will have to be agreed upon in a formal decision by all 57 OSCE participating States by consensus. Without the prior consent of all parties involved, any solution is totally unrealistic.