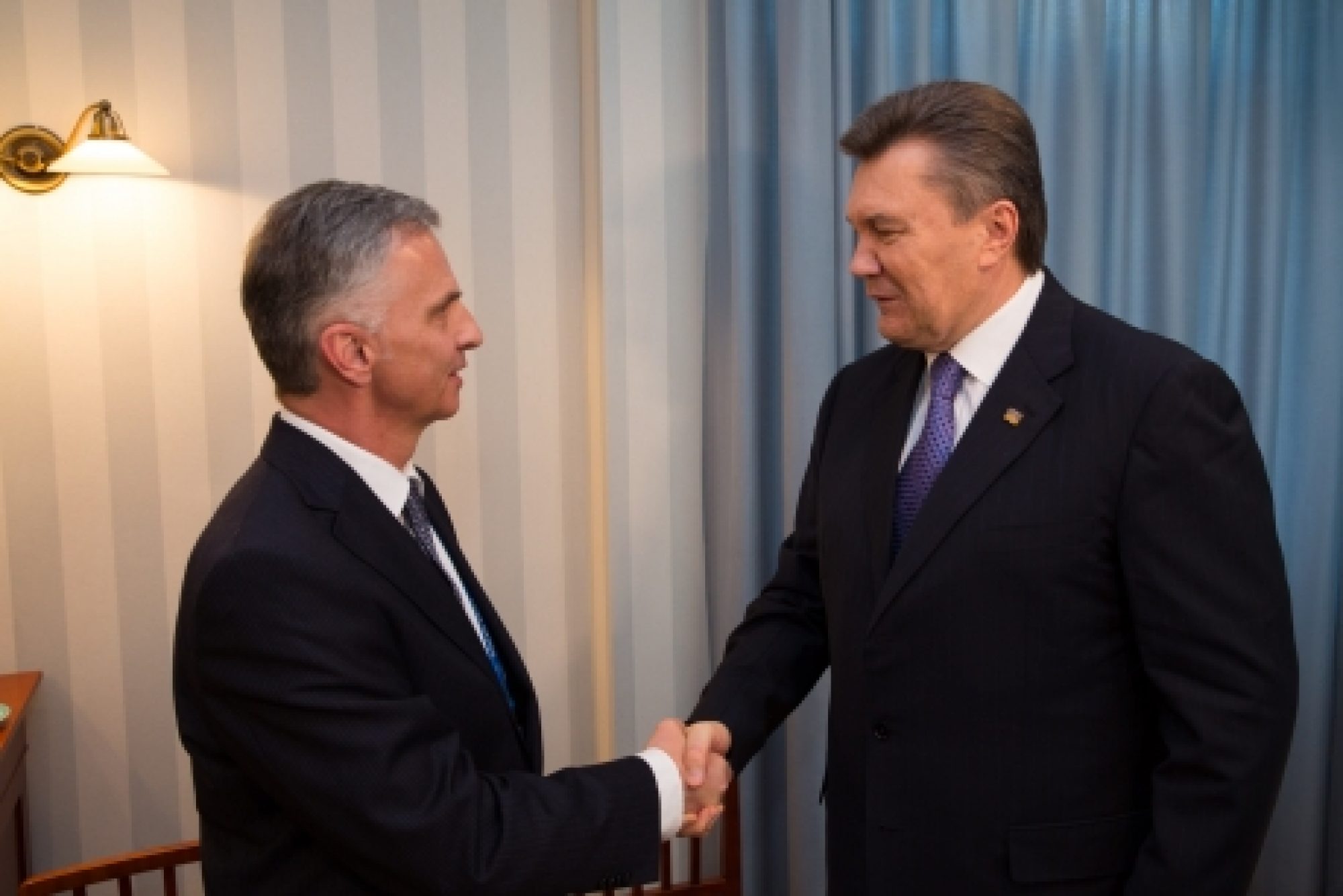 Can the OSCE help to settle the political crisis in Ukraine?

The leaked recording of a phone call last week between Victoria Nuland, assistant secretary of state for European and Eurasian affairs at the US State Department and Geoffrey Pyatt, US ambassador to Ukraine unequivocally revealed US frustration with the EU’s handling of the political crisis in Ukraine. The expletive used by Victoria Nuland to vent her anger leaves no doubt in this regard. The recording also highlighted Washington’s preference for a stronger engagement of the UN and Secretary General Ban Ki-moon’s special envoy to “help glue this thing”.

Certainly there are arguments for and against an increased UN role in Ukraine. In comparison to the EU, a UN special envoy might have less trouble taking a clear line and might eventually also enjoy Russian support. As is widely known, the EU is having trouble finding a common position on Ukraine and thus is often accused of not being able to act fast enough and speak with one voice. This has happened several times in the past, for example during the Kosovo crisis of the late 1990s. Furthermore, in the case of the Ukrainian crisis, the EU is considered part of the problem rather than an honest broker.

Yet, Ukraine is clearly a European issue. So why not involve the OSCE? It is a regional arrangement of the UN (under Chapter VIII of the Charter of the United Nations), and it includes the EU, Ukraine, the US, and Russia. Its very raison d’être is to encourage dialogue and cooperation, and to prevent the opening of new dividing lines in Europe.

Concretely, what could the OSCE do? What are the possibilities and limitations?

The OSCE has several tools available to support countries undergoing a political crisis. The 1992 Helsinki Document provides for the possibility of sending fact-finding missions in order to help manage a crisis politically. However, such a fact-finding mission would have to be decided upon by consensus by all 57 OSCE participating States. As an additional tool, the Chairmanship (which is currently Switzerland) could designate on its “own responsibility” a personal representative with a “clear and precise mandate in order to provide support”. That said, such a move could only be launched if the Swiss were confident that no participating State would be against it. And for the time being it seems that participating States have different preferences. But since Ukraine had the OSCE Chairmanship in 2013, it would be hard for it to reject such an offer. The OSCE Secretary General could also offer ‘good offices’, and send technical missions comprised of experts from the OSCE Secretariat to provide expertise and technical assistance. But this would not resolve the underlying political tensions.

OSCE Chairperson-in-Office (CiO), Swiss Foreign Minister Didier Burkhalter (who is also the President of Switzerland), has recently used all major international fora to actively promote the OSCE’s role in helping to settle the political crisis in Ukraine. On the margins of the Davos World Economic Forum, President Burkhalter met with then Ukrainian Prime Minister Mykola Azarov and proposed that the OSCE “could offer its expertise to facilitate dialogue between the government and opposition”. In addition, Mr. Burkhalter made use of the Munich Security Conference to meet with Leonid Kozhara, acting foreign minister of Ukraine, Ukrainian opposition leaders Arseniy Yatseniuk and Vitali Klitschko, as well as with Catherine Ashton, EU High Representative for Foreign Affairs and Security Policy. Most recently, Mr. Burkhalter also held a meeting with Ukrainian President Viktor Yanukovych on the margins of the opening ceremony of the Winter Olympics in Sochi.

Apart from facilitating dialogue, the OSCE could also help to address human rights violations in Ukraine, assist in the preparation of elections and provide further support through its institutions, such as the High Commissioner on National Minorities and the Representative on Freedom of the Media.

In short, there are a number of factors in the OSCE’s favor for helping to facilitate dialogue and reduce tensions in Ukraine. The OSCE is a neutral platform and framework that can help bring the parties together and that will act on the basis of a request by Ukraine. The OSCE is a cooperative security forum, it is a regional arrangement of the UN, it involves all the relevant actors, the CiO is both Foreign Minister and President (which gives him additional gravitas and access), Switzerland is neutral, and Ukraine is part of the OSCE Troika. If the parties are reaching a hurting stalemate and their neighbors want to reduce tensions, the OSCE can be the safety valve.

Conversely, the situation could further deteriorate, not only increasing the risk of dividing Ukraine, but also opening a rift between the EU and the Moscow-led Customs Union, consisting of Russia, Belarus and Kazakhstan. This would split Europe between a Euro-Atlantic space in the West and a Eurasian space in the East rather than creating a common Euro-Atlantic/Eurasian security community as envisaged in the 2010 OSCE Astana Commemorative Declaration.