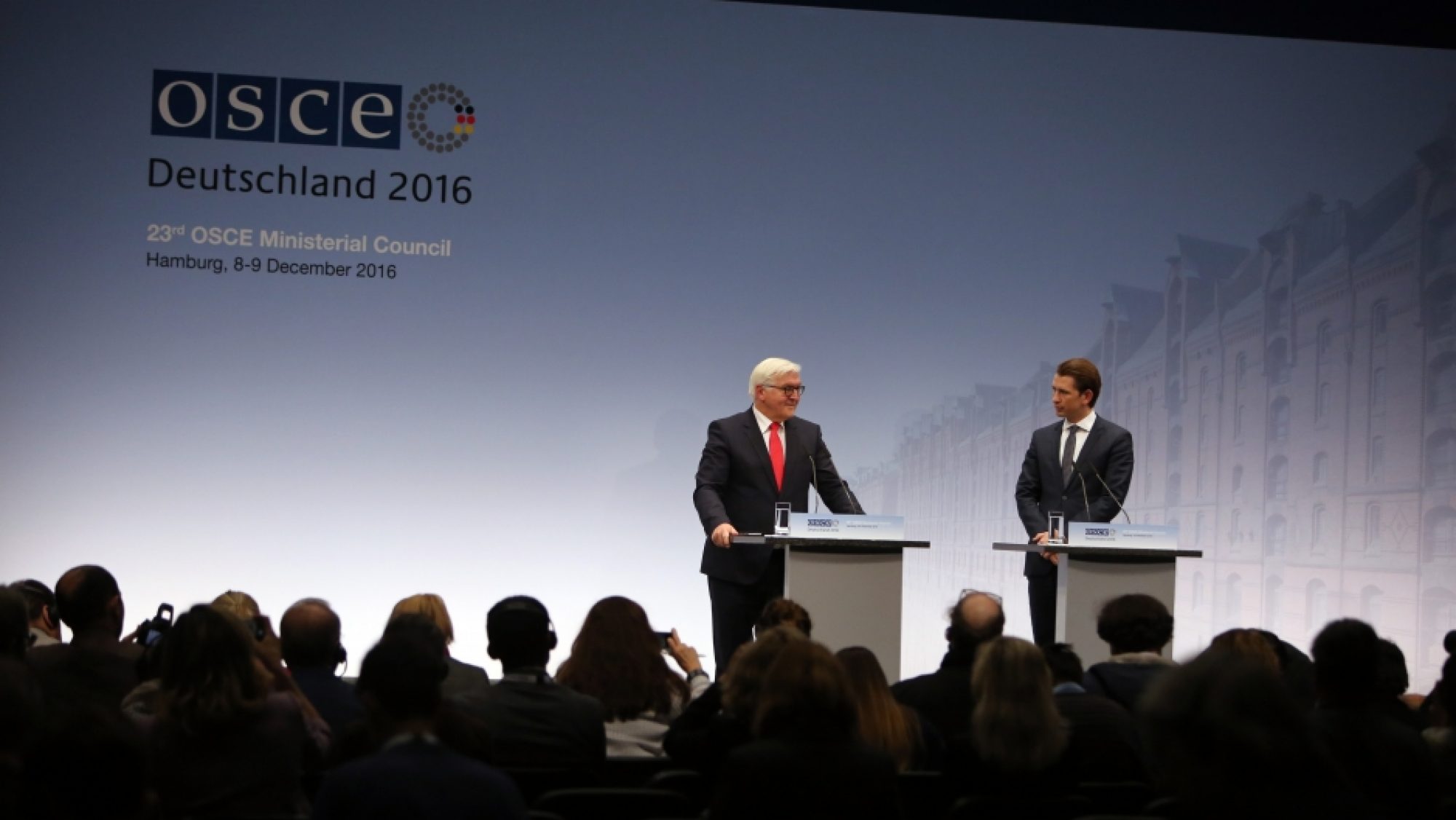 The OSCE Ministerial Council (MC) meeting, held in Hamburg on 8 and 9 December, was the final highlight of Germany’s 2016 OSCE Chairmanship. At the opening session, OSCE Chairperson-in-Office (CiO), German Foreign Minister Frank-Walter Steinmeier compared the OSCE to a lighthouse to guide the course of the organization in turbulent times. The metaphor of “turbulent times” was used in almost every OSCE speech Steinmeier gave in 2016. In such stormy times, the OSCE offers a platform for dialogue and cooperation.

The Hamburg Ministerial concluded Germany’s resolute efforts to pursue the course of multilateralism in addressing new challenges and in order to rebuild trust among the OSCE participating States. Though the 57 OSCE participating States were able to reach agreement on a number of joint decisions, fundamental differences of opinion remained evident throughout the two-day conference. Plenary statements were reminiscent of Cold War tensions, with 53 mentions of Russia’s aggression towards Ukraine. The United States (US), at the closing session, characterized Russian behavior in Hamburg as “bullying dressed up as politesse” and “a stunning display of disrespectful bad faith”, highlighting that at least seven ministerial decisions “died on a Russian sword”, with Russia often being the only country blocking consensus. Russian Foreign Minister Sergey Lavrov blamed the West for fragmenting Europe “into separate zones with different levels of security guarantees” and tried to dispel the “myth of a Russian threat”. He also noted the “ramifications of meddling in internal affairs” in particular in the MENA region and emphasized the migration crisis in Europe as a serious consequence of such actions.

Clearly, the OSCE’s vision of cooperative and comprehensive security is no longer shared by all participating States. None of the eight prepared decisions in the human dimension reached consensus. 42 states thus decided to separately publish a joint statement on “Human Rights and Fundamental Freedoms”, thereby making public the 15 states, including Russia, which did not support the statement.

OSCE foreign ministers also failed to produce a consensus declaration on the Ukraine conflict. In his opening address, Foreign Minister Steinmeier promised: “We won’t forget Crimea”. Similarly, to the innovative Chairmanship summaries Switzerland had introduced in Basel in 2014, Germany published “conclusions of the CiO”. In the document, “ministers deplored the violation of international law and common principles and commitments in relations between OSCE participating States”. The document also emphasized that in “focusing on the crisis in and around Ukraine, Ministers called upon all sides to meet their commitments swiftly and comprehensively.”

Since 2002, OSCE foreign ministers have failed to find consensus on a common political declaration. Since then, ministerial decisions have mostly dealt with transnational threats. This year in Hamburg, such decisions laid the foundation for better equipping the organization in the fight against terrorism, small arms and light weapons, and the challenges in the cyber area.

In the end, only 11 of more than 20 prepared draft ministerial decisions and declarations were adopted by consensus in Hamburg. Two decisions merit special mention. First, re-launching conventional arms control in Europe has ranked among the top priorities of the German OSCE Chairmanship. In August 2016, Steinmeier launched an initiative with an op-ed in the “Frankfurter Allgemeine Zeitung”. As a result, a side-event on arms control was attended at the MC in Hamburg by over 30 OSCE participating States, including the US and Russia. Thus, Steinmeier’s initiative did shake up a yearlong standstill in the arms control dialogue. The success of Steinmeier’s initiative can be seen in Decision No. 4/16, adopted by consensus at the MC in Hamburg, which underlines the importance of conventional arms control and confidence- and security-building measures for advancing comprehensive, cooperative, and indivisible security in the OSCE area. Ministers committed themselves to exploring how the negative developments of recent years in the arms control regime in Europe can be reversed and launched a structured dialogue on the current and future challenges and risks to security in the OSCE area. Thus, the Austrian Chairmanship now has a clear political mandate for moderating such an informal dialogue on arms control in 2017. However, both the US and Russia added interpretative statements, demonstrating US limits to military-to-military contacts and Russian reservations about modernizing the 2011 Vienna Document on Confidence- and Security-Building Measures.

Second, OSCE ministers managed to find consensus on a decision on migration governance, after a similar effort by the Serbian OSCE Chairmanship had failed in 2015. The German Chairmanship successfully set up an Informal Working Group (IWG) in March 2016, headed by the Swiss Permanent Representative to the OSCE, Ambassador Claude Wild. The IWG conducted a mapping of already existing OSCE expertise and activities related to migration, e.g. in the fields of labor migration, protection of human rights, promotion of tolerance and non-discrimination, combating organized crime, and border management. Germany was able to strengthen the visibility of the OSCE’s migration-related expertise and the topic of large movements of migrants and refugees as a security challenge was put higher on the OSCE agenda. However, several states, including Turkey, the US, and Switzerland, regretted in their interpretative statements that a stronger and more substantive decision could not be adopted.

In general, Germany’s OSCE diplomacy in 2016 was negatively affected by the surprising outcome of the Brexit referendum in June and Donald Trump’s election to the US presidency in November. As a result, German diplomacy in 2016 had to deal with the implications of the Brexit referendum for the EU, and the challenge of keeping divergent positions together within NATO in the run-up to the NATO Warsaw Summit in July. Uncertainty about US foreign policy under Trump has also cast a shadow on the OSCE.

In the end, Germany could not fully live up to the high expectations. In fact, it was for the first time in OSCE history that a relatively powerful state such as Germany took over the OSCE Chairmanship. Traditionally, small and medium-sized states have volunteered for the OSCE Chairmanship. According to a Gentlemen’s Agreement between the US and Russia, neither State will seek the OSCE Chairmanship. In the last 20 years, the UN veto powers France and Britain have also refrained from applying for the OSCE Chairmanship. In recent years, bloc-free countries such as Finland (2008), Kazakhstan (2010), Ireland (2012), Ukraine (2013), Switzerland (2014), and Serbia (2015) have predominantly shaped the OSCE’s activities, in addition to EU and NATO members Greece (2009) and Lithuania (2011).

In a turbulent year, Germany could not really make a difference within the OSCE, despite tireless efforts to encourage dialogue with Russia. Economic connectivity, the re-launching of conventional arms control, and tackling migration will form the legacy of Germany’s OSCE Chairmanship. But no major progress could be achieved in the Ukraine Crisis despite the fact that Germany was also a member of the Normandy group (together with France, Russia, and Ukraine).

In January 2017, Austria will take over the OSCE Chairmanship from Germany. Responsibility will thus return to a medium-sized State with a reputation of being an impartial bridge-builder between East and West. The Austrian OSCE Chairmanship will focus on fighting radicalization among youth, including fighting the threat of foreign jihadist fighters, and continuing work within the agreed negotiation formats on the protracted conflicts, including on Ukraine. Due to its strong role in promoting human rights during the CSCE Helsinki process, Austria also has a special responsibility to emphasize commitments in the human dimension.

In the “Hamburg Declaration”, the incoming OSCE Troika (Germany, Austria, Italy) invited all OSCE participating States to work jointly along five lines of action to strengthen the OSCE in supporting a secure Europe. First, to use the OSCE as platform for dialogue across dividing lines and to keep political channels of communication open. Second, to make the organization more effective in the conflict cycle. Third, to revitalize conventional arms control and modernize the Vienna Document. Fourth, to focus on joint responses to problems such as terrorism, extremism, or cybercrime. Fifth, to strengthen the institutional structure of the OSCE.

Attending his final OSCE Ministerial Council meeting as OSCE Secretary General, Lamberto Zannier concluded that he was proud to leave the OSCE in a stronger and more prominent position than when he took up his post in July 2011. Yet, he also conceded that the vision of the OSCE as a platform for engagement by countries with different perspectives and interests, has progressively eroded in recent years. He urged the return to real debate and engagement rather than using the OSCE as a forum for mutual accusations of violations of key commitments.

The Hamburg meeting was used both to deliver carefully scripted statements and to encourage informal debates on pressing topics. In 2017, under Austrian leadership, more genuine dialogue would be desirable over a continuation of verbal warfare and a clash of propagandistic prepared statements that result in little to no real interaction.

*Christian Nünlist is a Senior Researcher at the Center for Security Studies (CSS) at ETH Zürich. He is a member of the steering committee of the OSCE Network of Think Tanks and Academic Institutions. His most recent publications include “Trust and Realpolitik: The OSCE in 2016” and “Back in Business: The OSCE and Conflicts in Europe’s Neighborhood”.