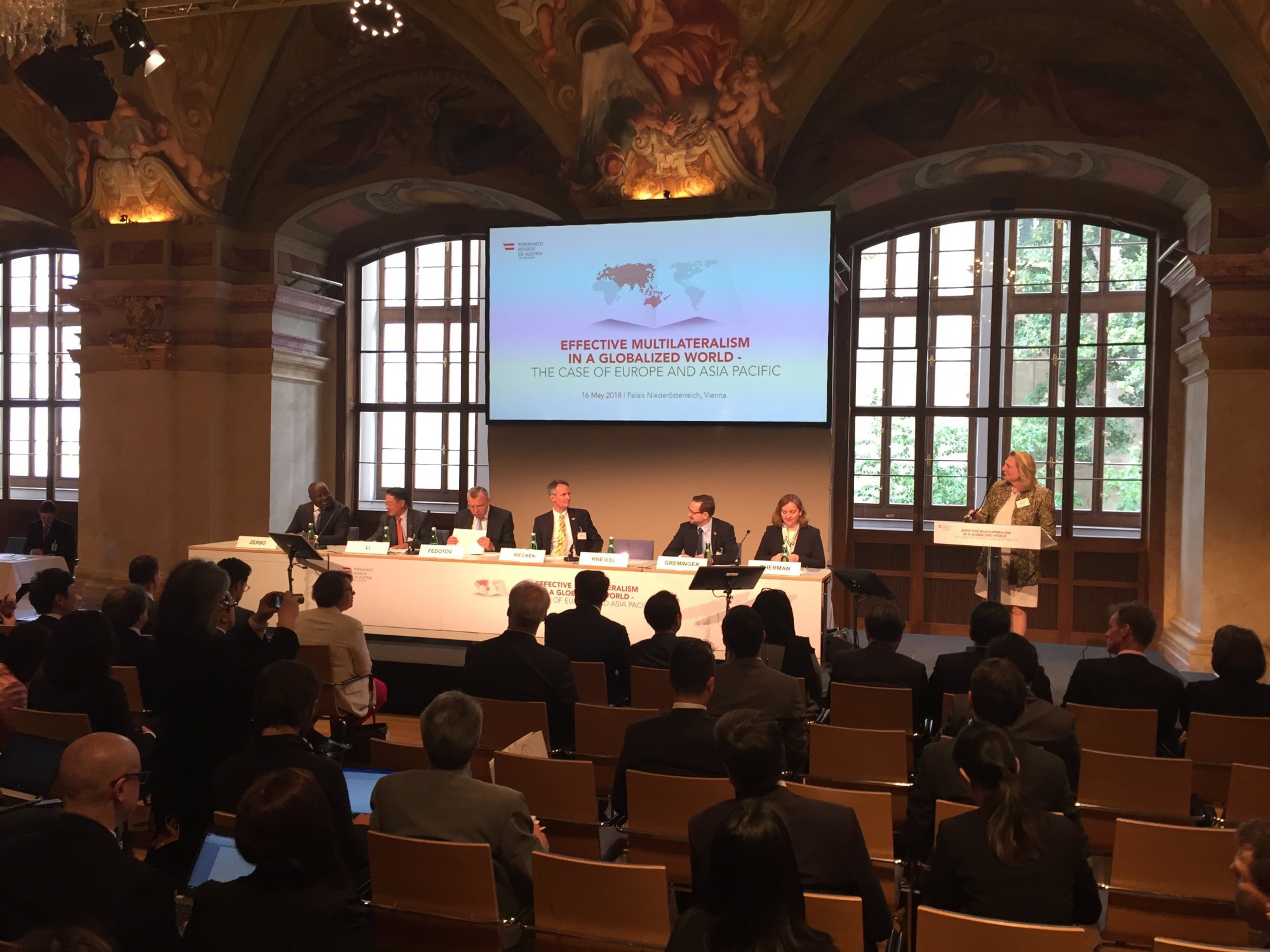 “Austria will do its utmost to make multilateralism matter again”

Austrian Foreign Minister Karin Kneissl today opened a high-level conference in Vienna entitled “Effective Multilateralism in a Globalized World – The Case of Europe and Asia-Pacific”. She delivered a keynote address, which was followed by statements by Yury Fedotov, General Director of the Office of the United Nations (UN) in Vienna; Thomas Greminger, Secretary General of the OSCE; Natalia Gherman, Special Representative and Head of the UN Regional Centre for Preventive Diplomacy for Central Asia; and Lassina Zerbo, Executive Secretary of the Preparatory Commission of the Comprehensive Nuclear-Test-Ban Treaty Organization (CTBTO).

The high-level conference takes place against the framework of the Austrian Chairmanship of the OSCE Asian Contact Group. “Austria’s current role within the OSCE’s Asian Partnership matches the heightened geopolitical importance my Ministry attaches to the Asia-Pacific region,” Kneissl said. Referring to the geopolitical changes in the Asia-Pacific region, Kneissl said that “it has become a necessity for us to look beyond our traditional foreign policy focus and to make this region a full-fledged priority”. This new priority was exemplified during the recent Austrian state visit to China from 7-13 April, which not only resulted in the signature of numerous business contracts, but also paved the way for political and cultural exchanges.

“The global security environment has become unstable. The principles on which our order has been based are being called into question and are being violated, both in Europe and the Asia-Pacific. We therefore need to better understand the factors that are putting our order under stress,” Foreign Minister Kneissl stressed in her keynote opening speech.

In this context, Kneissl also made reference to international agreements, such as the Joint Comprehensive Plan of Action (JCPOA) or Iran deal, which was concluded after lengthy negotiations in Vienna in 2015. “Pacta sunt servanda,” she stressed, specifying that she was brought up with the idea that contracts and treaties had to be preserved.

Foreign Minister Kneissl also referred to the upcoming Austrian Presidency of the Council of the European Union in the second half of 2018, and said that during this time Austria would “do its utmost to make multilateralism matter again”. After all, “a global order that is based on strong and cooperative multilateralism is both in the EU’s and in Austria’s interest”, she stated.

With regard to Austria’s 2017 OSCE Chairmanship, Foreign Minister Kneissl said that this was “an example of how multilateralism can work in practice”. She recalled the three Austrian OSCE Chairmanship priorities: continuing work on settling the protracted conflicts, combating extremism and terrorism, and rebuilding trust and confidence. In this context, Kneissl put special emphasis on the importance of preventive diplomacy and on working behind the scenes, stating that “for successful preventive diplomacy, you never get a medal of bravery in the field”.