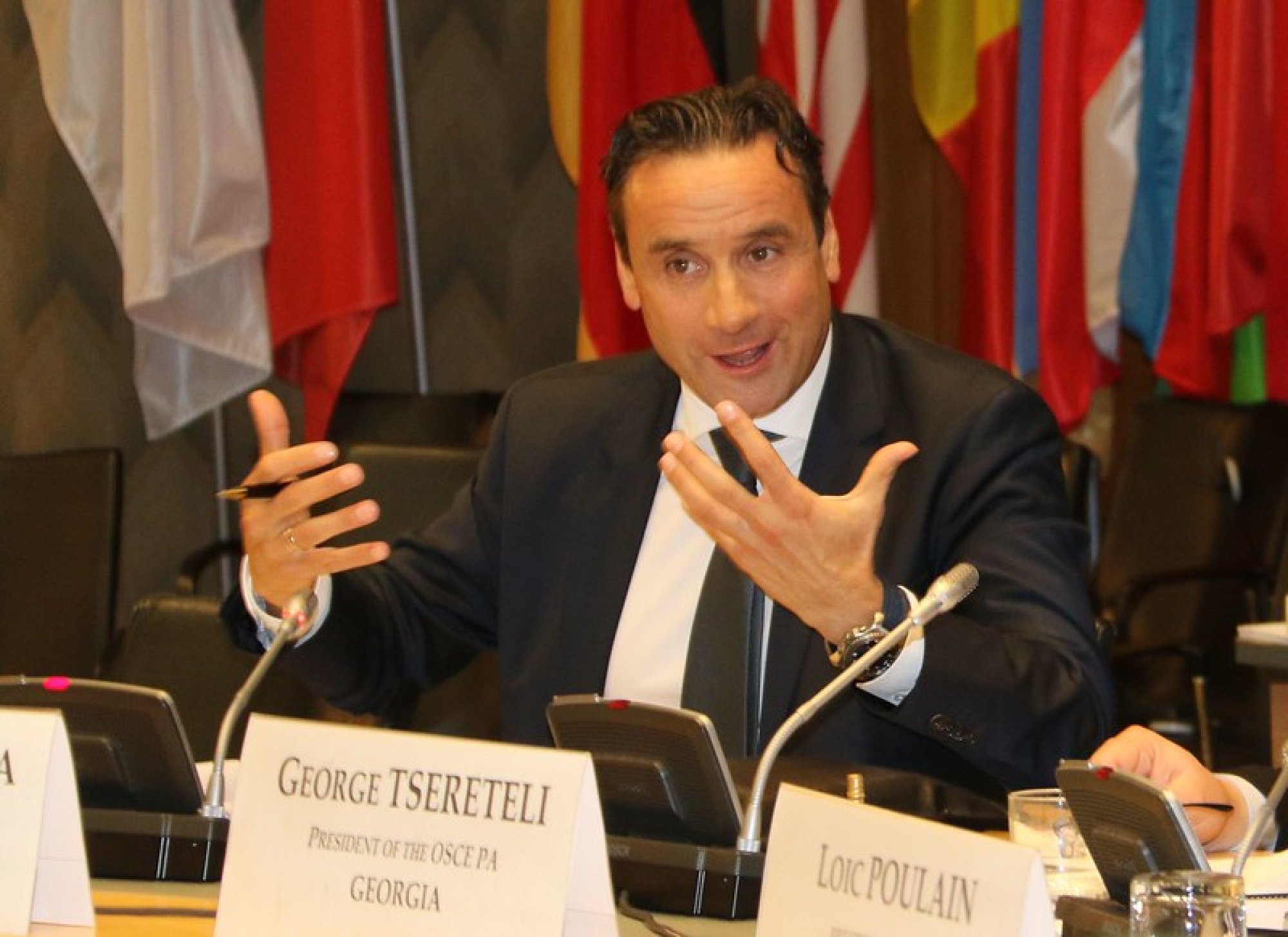 In this interview, OSCE Parliamentary Assembly Secretary General Roberto Montella, highlights the comparative advantages of parliamentarians in helping the OSCE overcome political stalemate and in mediating conflicts in the OSCE region.

SHR Monitor: What is the exact role of the OSCE Parliamentary Assembly (PA), particularly in comparison to the OSCE executive structures, Institutions and the OSCE Chairmanship? Why do we need the OSCE PA?

Roberto Montella: As President Frank Walter Steinmeier said when he was OSCE Chairperson-in-Office, the OSCE PA is the democratic backbone of the Organization. It includes over 320 members of parliament from 56 countries, representing all in all 1 billion citizens. The sole fact that national delegations to the PA are constituted by members of parliament from both majority and minority parties, essentially meaning from ruling and opposition parties, injects political pluralism and offers a wealth of policy viewpoints to the Organisation.

This and other distinguishing factors, such as decision-making through simple majority rather than consensus, and the possibility to speak up on all pressing issues within the OSCE, enable the PA to provide a distinct contribution, also based on parliamentary assets and added values, to the overall work of the OSCE, effectively complementing yet carefully coordinating with the action of the executive structures.

The contribution of the PA is undertaken via two main avenues. The first is at the international level, as we provide an interparliamentary platform for dialogue among legislators and facilitate, to the extent possible, parliamentary diplomacy. The second is constituted by the interlinkages between the national and the international levels: Parliamentarians are the best advocates of the 1 billion people the Organisation serves. They bring to the international agenda issues of interest and the needs of the citizens they represent. In turn, they also bring back home, both in their national parliaments and within their constituencies the commitments, the achievements and the solutions offered by the OSCE.

To substantiate what I am referring to with a concrete example: We have publicly encouraged the parliaments of Armenia and Azerbaijan to work with their constituencies and prepare the respective populations for peace.

Lastly, the PA also provides constructive oversight, critical thinking and political support to the Organisation. I sometimes view the PA as the political think tank of the OSCE.

The OSCE region is currently witnessing a number of crises. What is your role in addressing them? Do you also get engaged in mediation, for example in Belarus or in relation to the Nagorno-Karabakh conflict?

This is precisely where PA’s comparative flexibility usually kicks in. We have seen this most recently in relation to recent events in Belarus, Kyrgyzstan as well as with the Nagorno-Karabakh conflict. We haven’t approached any of these with prefixed plans but rather through awareness raising in relation to our distinct parliamentary toolbox. We left it entirely up to the “sides” to decide on whether to make use of our toolbox or not. This is what we have consistently offered, guided primarily by two principles: First, do no harm and second, work hand in hand with the governmental branch of the Organisation so as to support its toolbox and maximise traction in the delivery of support and assistance to the people we serve.

On Belarus, for example, we have offered our platform for informal dialogue facilitation between the authorities, the opposition and other national stakeholders. Our Bureau held a long discussion with the Head of the Belarusian Delegation to the PA, Andrei Savinykh, and Belarusian presidential candidate, Sviatlana Tsikhanouskaya. This can be repeated in multiple formats if the sides request it. I want to be clear that we don’t have a political agenda beyond ensuring the best interest of the people of Belarus whom we have had the privilege and honour of knowing more closely and appreciating their extraordinary human qualities on the occasion of PA’s 2017 Annual Session in Minsk.

We acted similarly concerning the conflict in Nagorno-Karabakh, which is now unfortunately developing into a full-scale war. We are active with our Armenian and Azeri delegations promoting all available OSCE instruments to help settle the conflict, starting with the Minsk Group and Minsk Group Co-Chairs, as well as the efforts of the Personal Representative of the Chairperson-in-Office, Ambassador Andrzej Kasprzyk. On top of that, our President engaged with the Speakers of both Parliaments and we again offered our platform to hold dialogue, in any needed format, between the two sides at parliamentary level. We will continue to put our tools at the disposal of the sides once again free of political agendas and in the best interest of the people we serve.

In general, I believe that solving the conflict is also about generating political will besides preparing the respective populations for peace. This can be achieved through various forms. I believe the most effective tool is a respectful dialogue, based on OSCE values and without prejudices of any sort. A prejudice free approach and an honest effort not to fall into the trap of adopting double standards ranks very high on my own personal agenda and that of the PA.

Has the OSCE PA done anything concrete to address the ramifications of the COVID-19 pandemic?

As soon as the pandemic broke out, I had a series of meetings with the leadership of the PA to discuss how to readapt our work and preserve the relevance of our Assembly also in this crisis situation. Just like the migration crisis or the climate crisis, this pandemic requires a global answer. We need to strengthen international cooperation and revive multilateralism in order to deal with this challenge, and parliamentarians are very well placed to promote and enact this concept in their countries.

Among several initiatives, we tried to be a hub for the exchange of needs and of best practices among our parliamentary delegations and we launched a cycle of Parliamentary Web Dialogues focusing on the implications of the COVID-19 pandemic in different key areas of the OSCE’s work, such as conflicts, human rights, the economy, migration, terrorism and so on. We had at least 100 parliamentarians engage with high-level experts, international organizations and OSCE officials every other week, exchanging best practices and discussing proposals and policy priorities for parliamentary work.

How do you make sure that something concrete comes out of it?

This resulted in a comprehensive document we published in July, containing highlights of the discussions and a set of operative policy recommendations, which we sent to all OSCE Foreign Ministers and Speakers of Parliament. We do not have enforcement tools, but our role is to provide a platform for dialogue where legislators can exchange ideas and can coordinate their efforts, in line with OSCE principles and commitments. We definitely succeeded in facilitating this kind of dialogue and I know our activities were instrumental to inform the work of our Members in their national Parliaments.

The OSCE is not exempted from the general downward trend affecting multilateralism. The causes which are threatening to weaken our Organisation originate both within and beyond the OSCE region. Consequently, the remedies are not exclusively intrinsic to the OSCE. Part of the solution will have to come from within the OSCE, while for the rest, the OSCE will have to rely on an inversion of the tide sweeping across the global multilateral infrastructure. So where do we start if we only hold one of the two keys? We should really start by treasuring what we have through an introspective exercise of the memorable achievements of the OSCE.

This will in turn catalyse the political attention the organisation deserves also in times of political distraction and predominant inward looking national policies. I am personally positive. A downward swing always offers an opportunity for reflection, revival and, if needed, reform. I think what should not be forgotten is that the countries that have been direct beneficiaries of the OSCE, for example the countries where the OSCE has field missions, have seen concrete improvements of the lives of people living there. I myself worked in the field with the OSCE, helping to broker agreements to defuse ethnic tensions and facilitate reconciliation. I saw the positive changes our organisation can bring and touched first-hand the beneficiaries, people whose lives have improved thanks to the work of the many women and men who serve in the OSCE.

If we can bring back the political thrust all the other pieces will fall in place. One should consider that, after all, the OSCE’s annual budget is approximately 140 million Euros. This is very little, particularly when compared with what states spend on defence or when compared to the 750 billion Euros that the European Union will spend on fighting the coronavirus pandemic.

As naïve as it may sound, there is also another important precondition and that is to act in good faith. National strategic interests and geopolitical engineering are physiological and legitimate. But they can find a peaceful coexistence within the boundaries of international order and multilateralism. What I am trying to say is that participating States should not sweep aside altogether our collective achievements and interests. In Vienna, this would start with avoiding to abuse the consensus rule just to highlight a concrete example.

How can the OSCE PA contribute to this?

The OSCE PA has some assets that could help to rebuild a political momentum around the OSCE. This is why I have launched what I informally called “Operation Lazarus”.

The main concept is to leverage on the capacity of parliamentarians to generate political thrust and raise public awareness, to stimulate the work of the OSCE and bring back high level political attention to it. Such initiative is not meant to work independently from the OSCE governmental side but rather, taking into account the complementarity of the different OSCE components, to offer to the governmental side support from the parliamentary dimension.

This initiative will initially unfold through a political manifesto, targeted events on the importance of the OSCE, including an upcoming one on the occasion of the 30th anniversary of the Charter of Paris. It will also include an overall mobilization of our OSCE Parliamentary delegations, as they can try to generate political interest in their capitals and untangle some of the contentious issues with their own authorities.

We want to help the Organization focus again on real substance and on doing its job. We also want to help create the political conditions in OSCE capitals that will help unblock some of these issues.