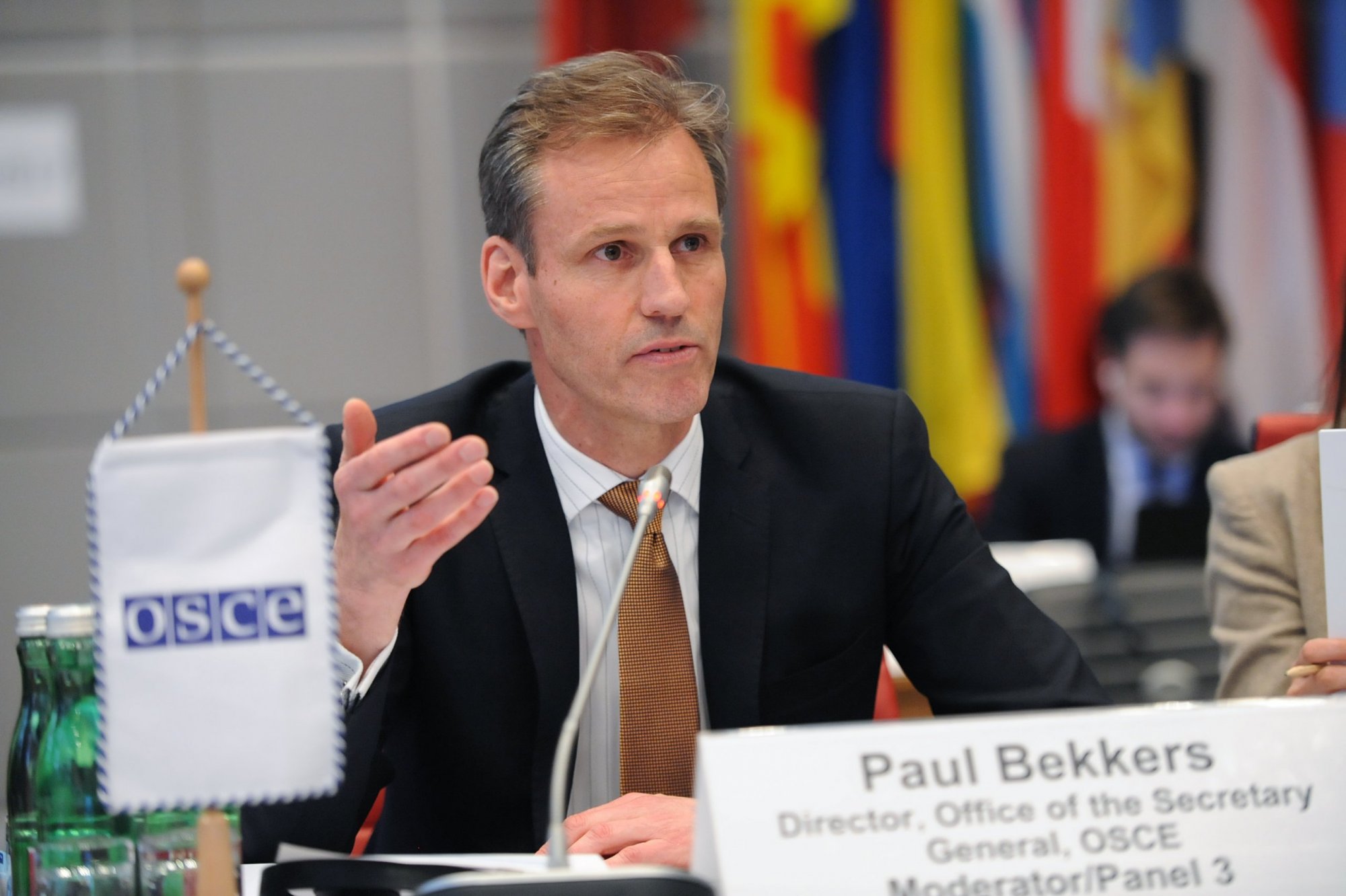 “The biggest fans of the OSCE have never been to Hofburg”

In this interview, Ambassador Paul Bekkers, who served as Director of the OSCE Office of the Secretary General until recently, shares his insights into his job of the past four years. He believes that the OSCE’s unique platform for dialogue is not used responsibly and efficiently by all OSCE states. He also calls on OSCE states to make better use of the OSCE Secretariat and Secretary General, particularly by providing the OSCE with the necessary financial resources.

SHR Monitor: After having served for four years as Director of the Office of the Secretary General, how would you describe the added value of the OSCE, particularly vis-à-vis other international organizations?

Paul Bekkers: The OSCE is a unique platform for dialogue. In the current world, there is an urgent need for states to talk to each other and engage with each other. In Vienna, at the OSCE, states can do that. By talking behind the scenes, we prevent bigger problems, we build bridges, and ultimately prevent more conflict.

Let me give you an example. It is clear that the annexation of the Crimean Peninsula is a flagrant violation of international law. While Russian actions are clearly wrong, there are several ways to deal with the situation.

The first one is: We won’t talk to Russia at all until they move out of Crimea. The second one is: In order to prevent things from getting even worse, the West decides to talk to Russia and in this way we manage to solve other issues together. By taking this second option, we are enabling progress in other areas, and we are actually preventing even more conflict, and perhaps persuade Russia to change course. This can happen only at the OSCE in Vienna.

In addition, the OSCE in Vienna is slightly off the radar and the Organization is less in the news. Diplomats can discuss in formal and informal settings a wide range of issues, including disarmament, anti-terrorism, climate change, and migration. The OSCE is less in the limelight and therefore there is less pressure.

Are you saying that the lack of visibility is actually a good thing?

On the one hand, it is a pity that the OSCE is not so much reflected in the media, because it really has so much to offer. On the other hand, the lack of visibility is an advantage, because diplomates are under less public pressure to deliver. This in turn also enables honest debates and helps states solve difficult issues together.

Can you actually see that concrete issues are solved within the multilateral framework of the OSCE? Or does the lack of media spotlight indeed sometimes lead to a climate of impunity, where states just block each other, and in the end simply don’t find a solution?

It sometimes feels as if the biggest fans of the OSCE have never been to Hofburg [the meeting place of the OSCE in Vienna]. Let me explain. I have been privileged to talk to groups, for example in the Middle East or in Asia, who would like to set up an organization similar to the OSCE in Vienna.

They really admire what we do and would like to copy it. The fact that the OSCE in Vienna is organized in a way that states actually have to sit together in a cooperative spirit, and prevent and solve conflicts, is admired by many. But there is a discrepancy between this outside perception and the reality at Hofburg.

What I really want to say is that – after my four years here – I think that the platform for dialogue is not used efficiently. Of course, this is in part due to the difficult political climate and zero-sum mentality that we are currently witnessing globally.

Yet, I do see that even in the current climate most states do have a certain room for manoeuvre. While Ambassadors always work on the basis of instructions, it is also their obligation to make their own assessments, and to help work things out and achieve solutions. This is not happening enough.

What would be your concrete suggestion?

There are several things that could be changed or adapted. We all want more efficiency at the OSCE. But the same states that call for efficiency are blocking it. For example, during my four years here at the OSCE Office of the Secretary General, OSCE Secretary General (SG) Thomas Greminger came up with very good proposals in his so-called ‘fit for purpose’ agenda.

Yet, in order to implement most of his suggestions, the SG actually needs the support from participating states, and for that, you need consensus among states. This is not always easy to achieve, as you know. The consensus rule has advantages, but it also has a paralysing effect on change in the Organisation.

Do you feel that the mandate of the SG from 2004 should be changed or adapted so that such situations can be avoided?

I actually think that the mandate of the SG is quite powerful. The main issue is that he should be allowed to use it to the full. But a handful of OSCE participating states see his role mainly as chief administrative officer. In my view, you should then select a bookkeeper, and not a qualified diplomat like Thomas Greminger.

It would make so much more sense if participating states made full use of the SG, who is an excellent advocate of the Organization, who meets regularly with foreign ministers, and who can convey important messages. But also, here, some states criticize his trips abroad.

Can you give examples?

For example, he has been criticised in the past for going too often to Moscow. I know very well that the SG would be more than ready and happy to go as often to Washington or Paris. We have been working for several years for him to go to Paris, but he is never seriously invited. Therefore, I think that this criticism is unfair.

Could one worry also be that the OSCE actually has a double-headed leadership, with the OSCE Chairperson-in-Office fulfilling an important political function next to the OSCE SG?

I do not consider this to be a problem at all. The Chairperson-in-Office (CiO), who is the foreign minister of the country chairing the OSCE, is the boss. The only important issue is that both, the CiO and the SG, work well together and coordinate their messages and act in concert.

Another negative dynamic hampering the efficiency of the OSCE is the fact that the annual budget is not approved on time. What, in your view, is holding back OSCE states to approve the budget on time, particularly given the fact that there has not been an increase in the level of the budget for so many years? [The total annual budget has been around EUR 138,000,000 – 140,000,000 for many years].

Actually, if you do think about it, the budget de-facto goes down, because zero-nominal growth does not consider inflation.

Several states have their political preferences and hobby horses and this plays out almost every year. In an ideal world, they should agree on the goals that they want to achieve within the OSCE, and then provide OSCE executive structures with the necessary money so that their goals can be implemented.

The OSCE Secretariat works hard to develop a realistic budget proposal every year. A lot of time and energy goes into this work. But then, during the negotiations, states have opposing views and the OSCE becomes a pawn in the hands of participating states.

Can you give more concrete examples?

Some states ‘east of Vienna’, for example, tend to be critical of the OSCE Office for Democratic Institutions and Human Rights (ODIHR), based in Warsaw. Some western states, in return, zealously guard the interests of certain OSCE Institutions, which ultimately leads to a lower budget for everyone.

Do you have any concrete suggestions how this could be improved in the future? Would a biennial budget cycle make any sense?

The OSCE budget is like an annual ritual dance, where the outcome is pretty much the same every year.

If you look at the amount of time that goes into preparing the budget proposal here at the OSCE Secretariat in Vienna as well as at the OSCE Institutions and OSCE Field Operations, and then the extra time that is needed to negotiate the proposal among OSCE delegates, yes, it would definitely make sense.

It is a fact that the OSCE is very inexpensive, particularly when you look at all the great work it does not only here in Vienna, but also in the field. In absolute terms, the OSCE budget is very small.

On this point, I also want to add that during the past four years, I made the observation that there is a disconnection between capitals and OSCE delegations here in Vienna. When the SG talks to foreign ministers about the budget during his trips abroad, there is usually not much of a disagreement. But for some reason this does not trickle down to diplomates in Vienna.

Finally, I would like to ask you, for you personally, looking back on those four years, is there any specific moment that was particularly rewarding from a professional point of view?

Representing the OSCE outside of Vienna was the most rewarding thing for me. When the SG is prevented from traveling abroad, I sometimes deputized for him. Outside of Vienna, people and other organizations actually look up to us. They even sometimes see better what we are good at, and why we are needed.

Ambassador Paul Bekkers has served for four years (2016-2020) as Director of the OSCE Office of the Secretary General in Vienna. Prior to this post, he was the Ambassador of the Netherlands to Poland and to Malaysia.

The interview was conducted by Stephanie Liechtenstein in Vienna on 21 February 2020.