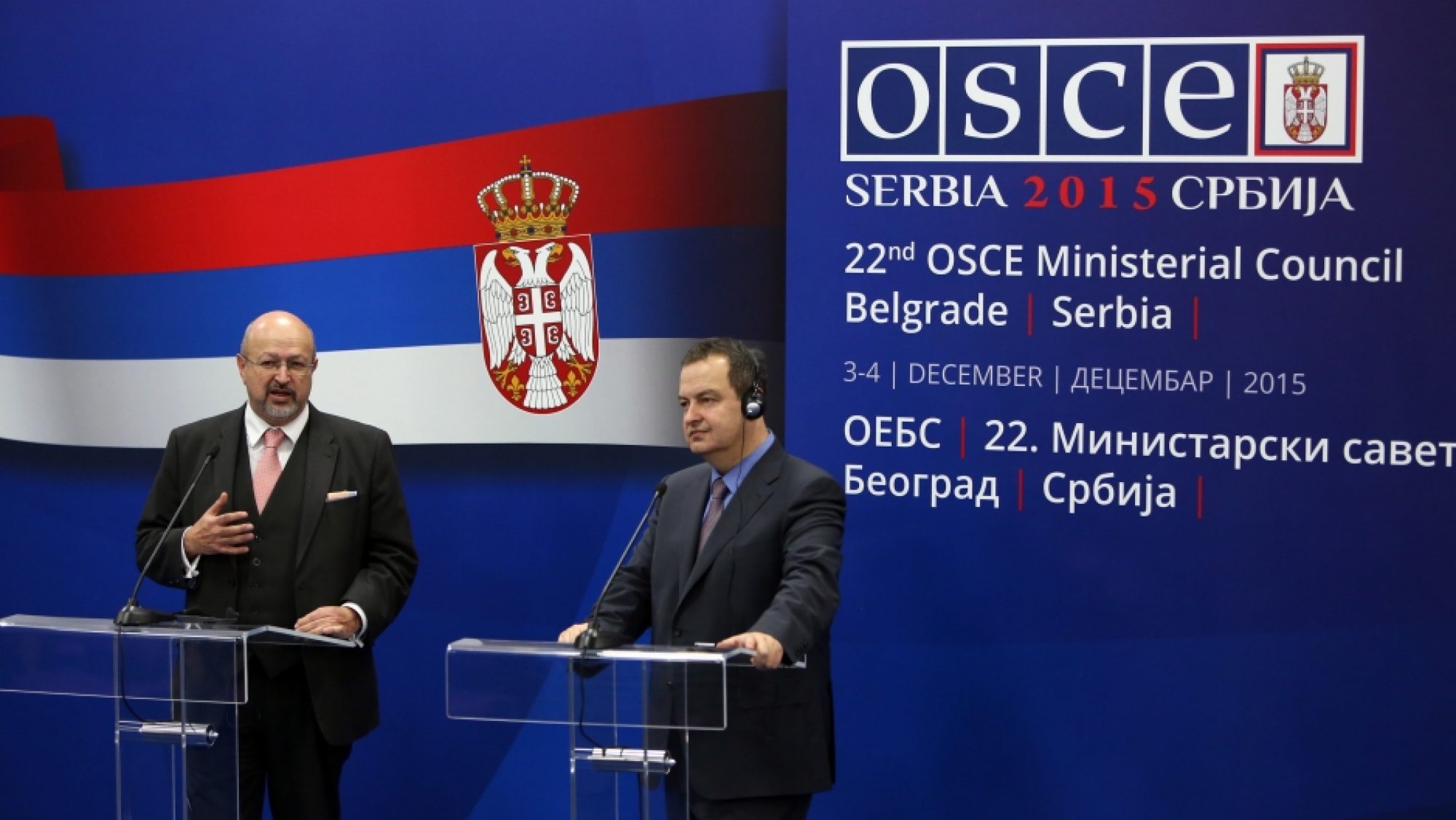 “Soldiering Through”: A Preliminary Assessment of Serbia’s OSCE Chairmanship

When in December 2011 Serbia – together with Switzerland – put forward its candidacy for the OSCE Chairmanship, it was seeking wider international affirmation and influence. Belgrade wanted to prove itself as capable of sustaining a serious, committed service to European security, and also hoped to bolster its chances for EU membership. The fact that 2015 presented an important milestone – 40 years since the signing of the Helsinki Final Act – was not without significance.

Two countries running consecutive Chairmanships wisely agreed that Switzerland would be concentrating on the Western Balkans, commonly understood to be the most difficult of the tasks ahead for Serbia in its capacity as OSCE Chair. It is important to note how at this moment in time no one saw the Ukraine crisis developing. “Back in 2012, when Serbia’s OSCE Chairmanship was announced, no one could have guessed that Ukraine would be at the center of the OSCE’s attention three years later”, according to Dejan Sahovic, Head of the working group that the Government of Serbia had tasked with coordinating the OSCE Chairmanship. “Because of different expectations surrounding the Ukrainian crisis, the Chairmanship indeed presented a hot potato for Serbia”, added one of Serbia’s top diplomats. The role of the Organization became all the more important as the crisis developed, since it soon became clear that the OSCE would be the one actor accepted by all parties. When in January 2015 its parliamentarians were stripped off their right to vote in the Council of Europe, Russia and its political representatives announced how they would – from now on – engage even more through the OSCE and its institutions (in this case, the OSCE Parliamentary Assembly).

For all these reasons, officials of the Serbian Ministry of Foreign Affairs decided that Serbia would first and foremost act as an “honest broker” in the wider dispute between Russia and the United States, despite Belgrade’s apparent closeness to Moscow. This was precisely the term that Serbian Foreign Minister Ivica Dačić used when making his first address as OSCE Chairperson-in-Office to the OSCE Permanent Council on 15 January 2015. Indeed, Serbia has attempted to keep “an equal distance” between the two poles of power, referring to “impartiality” and “transparency” as two major themes. This presented a major challenge and many questioned the ability of Serbia to take on such a major task.

In addition, many questioned whether Serbia would have the human and financial resources to take on the OSCE Chairmanship. Yet there was Serbian customary – if not always praiseworthy – resourcefulness, along with a sense of urgency and great responsibility. After all, Serbia’s OSCE Chairmanship was perceived as a priority commitment by two successive governments, which is some feat in its conflict-ridden political context. Civil society was asked to provide inputs, and was consulted on priorities – although this happened only in late 2014.

Expectations of Serbia and the potential role it should play in the Ukraine crisis were unrealistic from the start and many voices diminished them further, explaining how “Germany and France do not need an intermediary to communicate with Moscow”, or that “it will not be upon Serbia to dictate the Organization’s agenda”. Ultimately, prime movers behind any agreement would be the four major powers that have already brokered Minsk 1 and 2. Nevertheless, the Ukrainians themselves expected more, complaining how Belgrade opted to stay on the sidelines and focused on expanding the OSCE Special Monitoring Mission (SMM) instead.

The work done by the SMM is precisely what Belgrade sees as a relative success (achieved amidst difficult circumstances), as well as the OSCE Youth Ambassadors initiative – which it encouraged and supported, here again following the Swiss precedent. Serbia indeed played a role in doubling the SMM in size as well as extending its mandate; with the Trilateral Contact Group (Ukraine, Russia and OSCE) forming four working groups within which specific issues were to be resolved. Even if these steps were not conceived by the Serbian Foreign Ministry, they remain important.

Voices raised in regard to Serbia’s record within diplomatic circles were by and large positive. Among members of the Panel of Eminent Persons, apparently it was only the Russian representative who criticized Serbia’s approach. Given that the Ukrainian side also expressed its reservations, this could be seen as a proof that Belgrade indeed attempted a “balancing act”. On different occasions, compliments could be heard from both Secretary General Lamberto Zannier as well as diplomats preparing Germany’s upcoming tenure. Finally, the Head of the OSCE Mission to Serbia himself commended Serbia at times when “all seem to have lost their compasses”.

Civil society’s perspective is somewhat different. A coalition of five civil society organizations (CSOs) was set up in order to monitor Serbia’s implementation of the OSCE human dimension commitments while chairing the Organization. This is important as the OSCE Chairmanship should lead by example. Each CSO focused on one specific obligation, including the situation of Roma (an issue across Central and Eastern Europe), the situation of national minorities, freedom of the media and freedom of assembly, as well as transitional justice. The coalition’s agenda was ambitious and it intended to contribute to each of Serbia’s planned activities.

Finally, the so-called self-evaluation exercise can probably be seen as one of the most important aspects of the Serbian OSCE Chairmanship. The self-evaluation exercise was initiated by the 2014 Swiss OSCE Chairmanship. Its goal was to analyze how Switzerland and Serbia implement their OSCE human dimension commitments. This was important for Serbia as this year’s European Commission Progress Report stressed that “sustained efforts are (still) needed to ensure effective and consistent implementation” of human rights legislation. The EU’s concerns regarding freedom of expression, promotion and protection of vulnerable groups and efforts to improve the “difficult living conditions of Roma” correlate with those expressed by the mentioned coalition of CSOs. Thus, it is possible to say with some certainty that through the self-evaluation process, Serbian civil society has found a new way of holding the authorities accountable.

In conclusion, Serbia has “soldiered through” what was an unexpectedly difficult year of chairing the OSCE. Aware of its limited capacities, the Serbian Ministry of Foreign Affairs opted for a low-key approach, working through the OSCE institutions, and lobbying, within its means, for bolstering of the SMM. Hopes of how Serbia could somehow achieve a breakthrough in Russia’s clash with the West were overoptimistic. Although they don’t see eye to eye on Serbia’s human rights record, or media freedoms – being in danger second only to times of Milosevic’s regime – the Serbian Ministry of Foreign Affairs and civil society cooperated. Ways and frameworks for continuing the self-evaluation process should be sought.

The 22nd OSCE Ministerial Council meeting, which will commence in Belgrade tomorrow, will provide a platform for dialogue on all of the above mentioned issues and will hopefully lead to the adoption of a number of ministerial decisions, reflecting the priorities of Serbia’s OSCE Chairmanship.