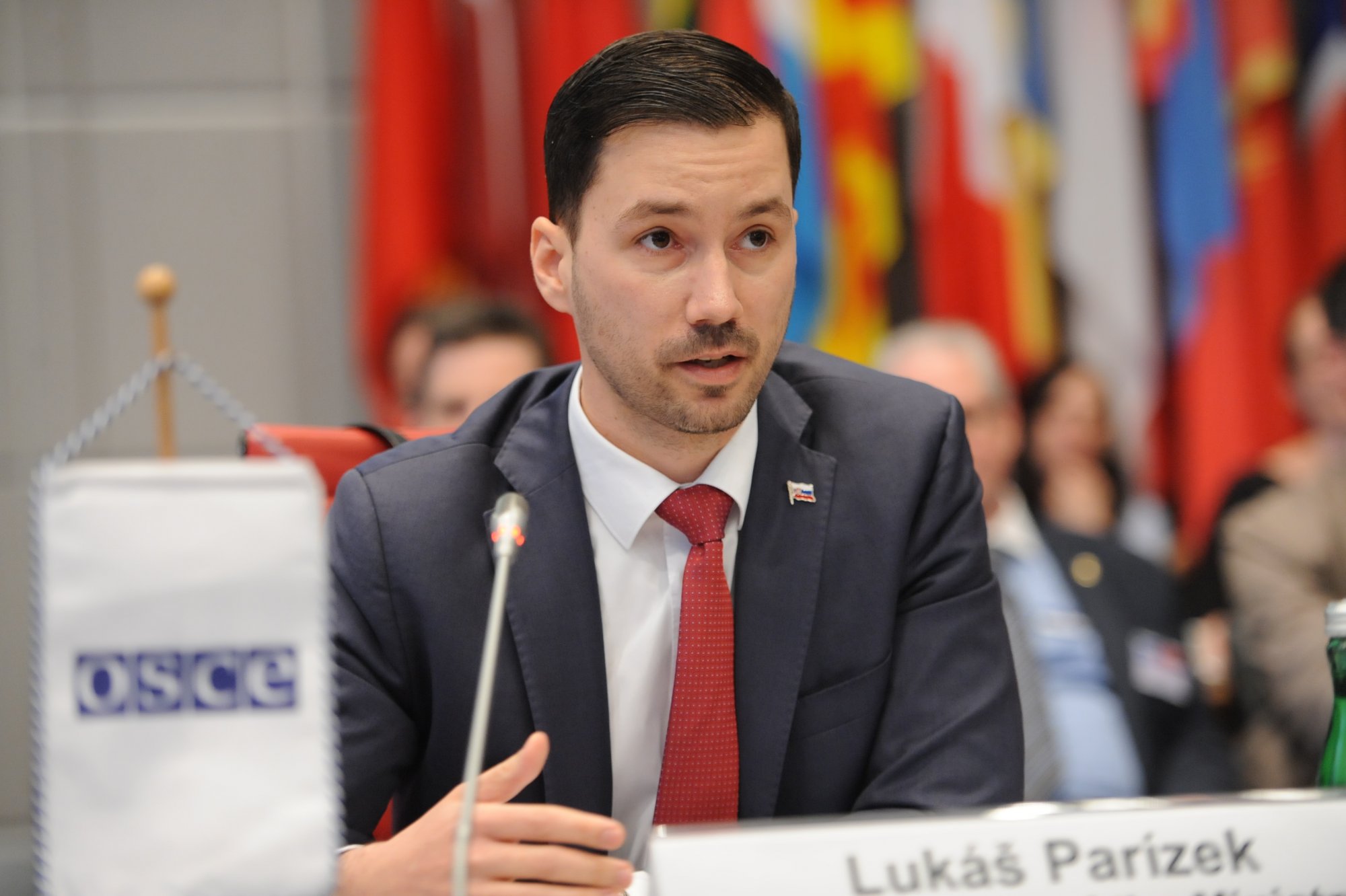 “Reform of Scales of Contribution is almost achieved”

In this interview, Slovak State Secretary Lukáš Parízek explains that despite great efforts by the 2019 Slovak OSCE Chairmanship, there is still no consensus on the contentious issue of the so-called OSCE Scales of Contribution, with 56 out of 57 states backing the reform proposal. Albania is now in the driving seat, trying to find a solution on this controversial issue as well as attempting to forge consensus on the 2020 OSCE budget and thus averting financial uncertainty.

SHR Monitor: How would you describe the successes and shortcomings during your OSCE Chairmanship in 2019?

Lukáš Parízek: First of all, we faced a problematic situation with the approval of the OSCE budget. Under my leadership, we managed to achieve consensus on the financial mechanism of the Organization which led to the approval of the 2019 budget in April.

We also achieved many other things throughout the year, particularly in and around Ukraine. We witnessed the successful repair of the Stanytsia Luhanska bridge, several recommitments to the ceasefire, an exchange of detainees, and successful military disengagement from three areas. I think that the reconstruction of the bridge is highly symbolic, but it also has a very concrete impact for people on the ground, who can now safely cross the line of contact and thus reconnect with their communities.

We were also actively engaged in other conflict regions, either directly, or through special or personal representatives. I would say that we managed to reduce the threat of armed conflict, as the conflict situations have not significantly deteriorated throughout 2019.

We also hosted a successful informal ministerial gathering in the High Tatras mountains in July with the participation of 23 foreign ministers, 11 state secretaries and almost 300 delegates from across the OSCE region. Ministers agreed on the high relevance of the OSCE in the current European security architecture.

Of course, the public scrutiny assesses the Chairmanship by the number of adopted Ministerial Council decisions. In general, I think that expectations of Ministerial Council meetings should not be too high, because discussions are often dominated by polarized positions of participating States.

Despite the fact that the OSCE Ministerial Council meeting in Bratislava ended with a limited number of agreed documents, we did ensure the continuity of the Organization’s leadership by agreeing on the Swedish and Polish OSCE Chairmanships for 2021 and 2022, respectively.

On the eve of the Ministerial Council meeting in Bratislava, the OSCE Parallel Civil Society Conference convened. I have been informed that Slovakia has not participated in the so-called self-evaluation exercise that the previous Swiss, Serbian, German, Austrian, and Italian Chairmanships have all participated in. The self-evaluation is supposed to review the implementation status of existing commitments in the human dimension and is widely seen as a way for the Chairmanship to lead by example. Why has Slovakia decided not to follow this practice?

All OSCE countries are members of the UN and are also subject to the Universal Periodic Review. In 2019, the Slovak Republic was subject to this Review, where 82 UN member states (of which 22 are member states of the EU) addressed 195 recommendations to Slovakia, of which 185 were accepted.

Slovakia concentrated all its efforts during the OSCE Chairmanship on conflict prevention, with special focus on humanitarian aspects, including activities for a secure future for our societies and effective cooperation of multilateral organisations.

We consider it sufficient to communicate the results of the Universal Periodic Review of the human rights situation in Slovakia in 2019, a de facto transparent and impartial audit of the international community and intergovernmental organizations.

Apart from this issue, there are also other unresolved topics that will have to be dealt with by the Albanian Chairmanship in 2020. One of them concerns the inability of OSCE participating States to agree on the so-called OSCE Scales of Contributions that define how much each of the 57 participating States annually pay for the OSCE. Where does this issue stand now?

As I said before, we managed to achieve agreement on a set of provisional Scales of Contributions for 2019, which also led to the approval of the 2019 OSCE annual budget in April 2019.

The swift approval of the 2020 annual budget is now a top priority, in order to enable the OSCE to function normally as of the beginning of the year, and to prevent any uncertainties. I am not excluding that the approval of the budget will again be made conditional on an agreement on the Scales of Contributions or other difficult issues, for example nominations for top OSCE positions.

In any case, throughout 2019, we came very close to an agreement on a long-term solution for the Scales. This historical reform is almost achieved, all we need is one more confirmation.

Our proposal is very unique and tailored. We carefully crafted a framework that would entail a mathematical formula which would provide for a certain amount of flexibility and voluntariness.

According to this formula, participating States would be allowed to either chip in more money, if they want to, or request that their contributions are not raised. Under this same formula, the so-called chronic underpayers would have to pay more.

We put this mechanism on the table and it is still being negotiated. So far, we have the support from 56 out of 57 participating States. We are very close to consensus. I think that Albania can take it up from here and can hopefully secure the approval in 2020.

I would like to add that I think that the Scales of Contribution should not be up for regular negotiations. Ideally, there should be an automatic mechanism that remains valid for decades.

Which state is not backing the proposal?

What would be your advice to the 2020 Albanian OSCE Chairmanship?

My main message to them would be to ensure continuity.

The situation in and around Ukraine as well as in other conflict zones is still of great concern. The leadership of the Chairmanship needs to be not only visible, but also physically felt showing presence on the ground. Commenting from Vienna, Bratislava or Tirana alone is not enough. We will of course support Albania in all of this, particularly within the context of the OSCE Troika.

In this context, I would like to pay tribute to all members of the OSCE field missions. They implement their mandates by literally engaging with local authorities, civil society, youth and civilians on the ground.