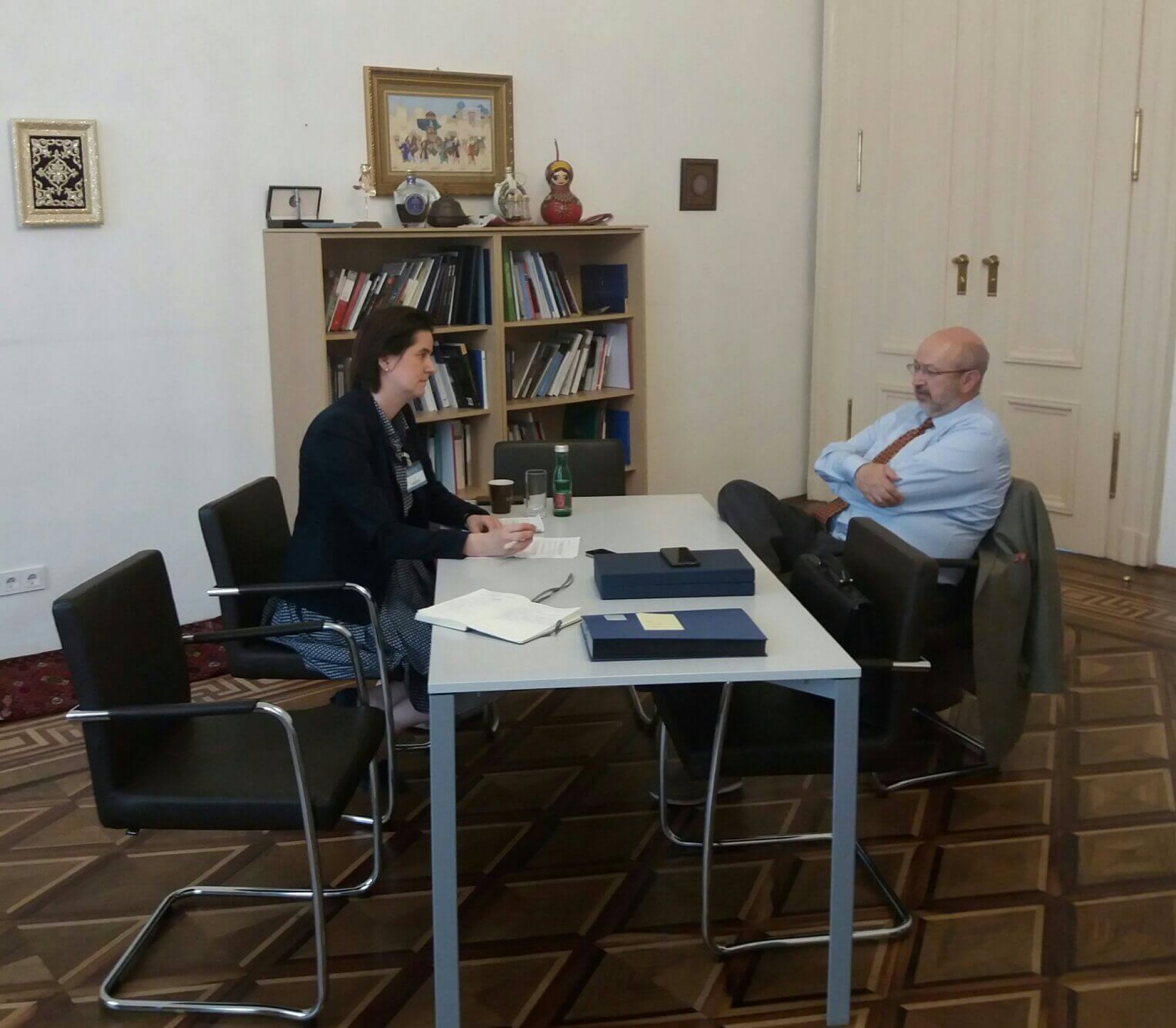 On 28 June, just two days before the expiration of the mandate of the OSCE Secretary General, Stephanie Liechtenstein, Web Editor-in-Chief, met with Lamberto Zannier in Vienna for an interview.

In this interview, Lamberto Zannier shares his views about the mandate of the OSCE Secretary General. He underlines the necessity to create the post of a Deputy Secretary General. He also suggests to introduce a system whereby OSCE Chairmanship countries rotate in alphabetical order, as this would automatically strengthen the role of the Secretary General and of the OSCE institutional structures. Zannier also stresses that the Secretary General should be recognized as the public face of the entire OSCE, working to coordinate an increasing number of multi-dimensional challenges across the OSCE. Furthermore, Zannier recommends that work should continue on the legal personality of the OSCE. He also suggests to update the current concept of OSCE Field Operations. Zannier also points out that the voting rights of certain countries, who are more than three years behind with their payments, could be suspended. Finally, he calls for a return to a more genuine dialogue, where countries become the protagonists of the debate again, and where they take responsibility for the Organization.

SHR Monitor: How do you view the official mandate of the OSCE Secretary General? What are its positive aspects and what are the challenges attached to it?

Lamberto Zannier: The mandate of the OSCE Secretary General (SG) is relatively restrictive, but I interpreted it in a broad manner and I found support for the way I did my job. I made sure not to take anyone by surprise by informing and consulting participating States in a transparent manner. This helped me to build trust.

Yet, talking only about the mandate of the SG is not enough. The role of the Chairmanship needs to be included in this discussion. I feel that the OSCE, in many ways, has run its course as a post-Cold War organization. We are entering a new phase where we need to rethink some of the fundamentals, both in terms of policies and in terms of structures. The system whereby countries choose an adequate Chairmanship is slightly presumptuous. I don’t think this system exists anywhere else. My feeling is that we need to go back to basics and give more ownership to all participating States. We cannot have groups of states who are allowed to chair the Organization, and others who are not really considered to be qualified for that job. I am therefore in favor of a system whereby Chairmanship countries rotate in alphabetical order. Once such a system is adopted, it will be less expensive for individual countries to hold the Chairmanship, and the role of the OSCE institutional structures, such as the role of the SG, will be strengthened automatically.

One other aspect that I would like to raise in this context is the relationship between the SG and the Heads of Institutions. During my time, it has been a relationship of mutual respect and it worked well. But I do think that, undeniably, the SG is the Chief Administrative Officer of the whole Organization. He or she has to be recognized as the public face of the entire OSCE.

This becomes even more important as we are entering a new phase, where most of the challenges are multi-dimensional in character. This means that most issues are actually multi-dimensional and that there are very few areas where one single OSCE Institution can act independently. Instead, coalitions need to be built, and work needs to be coordinated across the entire Organization.

One example is the fight against violent extremism and radicalization. This issue needs to be addressed in a multi-dimensional and cross-institutional manner. It touches on multiple themes, including on terrorism, free societies, human rights, minority issues and free media. All Institutions and departments in the OSCE should work together to develop strategies to address such complex issues. In this joint effort, the SG should adopt a coordinating role, while respecting the mandates of the OSCE Institutions.

SHR Monitor: In light of the current difficulties of forging consensus on your successor, what happens if there is no OSCE Secretary General for a while?

Zannier: Well, I am the wrong person to ask. You should ask the Chairmanship. But let me clarify the following.

The SG is, on the one hand, Chief Administrative Office of the whole OSCE, including of all OSCE Institutions. On the other hand, the SG is also the Head of the OSCE Secretariat in Vienna. Once the mandate of the SG ends, there is a Deputy Head of the Secretariat (the Director of the Conflict Prevention Center) who could head the Secretariat as interim solution until a new SG takes office. There is, however, no Deputy Secretary General, who could take over the function of Chief Administrative Officer of the entire OSCE, including all Institutions, until a new SG takes office. This is a problem, in my opinion, and therefore already in 2011, I proposed the creation of the post of Deputy Secretary General – a request which was unfortunately refused by participating States. So, it is the responsibility of the Chairmanship to appoint an acting Deputy.

When I started my job as OSCE SG in 2011, I was based in Kosovo working as United Nations Special Representative. I was asked to begin my job only 16 hours after I was informed of my appointment. I came overnight from Kosovo because I was told that the OSCE cannot remain without a Chief Administrative Officer.

SHR Monitor: Speaking a bit more about the need to reform the OSCE, what are the lessons-learned from the outbreak of the Ukraine crisis in 2014?

Zannier: First of all, the OSCE was very efficient in this context. I had people on the ground in Ukraine very quickly, even before we had an agreement on privileges and immunities. Such a situation could be avoided if the OSCE had a legal personality. Hence, work needs to continue on this issue as it has a negative impact on the work of the OSCE.

Second, we rely a lot on the secondment system which provides us with a large number of people who are not always familiar enough with the OSCE. We therefore have to make a huge effort to train people before we send them to the field. In the case of Ukraine, we needed to find people who have a military background, which proved to be problematic, especially at the beginning.

Third, supporting the work of the OSCE Special Monitoring Mission (SMM) to Ukraine requires a strong SG and a strong Secretariat to provide appropriate backstopping, much needed guidance and direct support in many areas. It should not be forgotten that the SMM does much more than just monitor the situation on the ground. OSCE monitors help to broker local ceasefires, they are assisting the local population by facilitating the repair of critical infrastructure such as water and electricity. The SMM also facilitates civilians crossing the line of contact, and helps to rescue civilians who are stuck in no-man’s-land between mines.

On the other hand, the SG is very often overloaded with operational work, which again underlines my argument that it would be important to create the post of a Deputy Secretary General.

SHR Monitor: The situation on the ground in eastern Ukraine has become very tense and the work of the SMM is being hampered and has become much more dangerous. Tragically an OSCE patrol member died on 23 April when his armored car hit what seemed to be a landmine. What can be done to help ease tensions in Ukraine? What could the Chairmanship do?

Zannier: The Chairmanship can make sure that the OSCE is well-resourced and that the OSCE SMM is supported. When it comes to moving the negotiations forward, you need a convergence of minds and wills of the key players. The Chairmanship can help to create a space to facilitate negotiations and help the key players come together. In this case, it would have to be not only the Normandy Format countries but also the United States.

Zannier: My view is that the current concept of OSCE field presences is outdated. I don’t think that there is a crisis of OSCE field operations on the ground, but rather a crisis of an old method that needs to be updated.

For example, in the future, thematic activities could be launched in a number of countries, including in some where we don’t have field operations yet. For such thematic activities, no official mandate (that is approved by consensus) is needed. The OSCE should also invest more in so-called Centers of Excellence. We already have very successful examples in Central Asia, namely the OSCE Academy in Bishkek and the Border Management Staff College in Dushanbe. It would also be a good idea to open small OSCE information offices across the OSCE region in order to better inform the general public about the OSCE’s activities.

One of the main problems that I see is that there is a certain feeling and sense of imbalance. A certain group of countries feels that they are scrutinized by other countries. We need to move away from this progressively.

Of course, the OSCE should maintain its classical field operations that have been deployed in response to a conflict or to a post-conflict situation. Such field operations still need to be based on strong mandates that are approved by consensus.

SHR Monitor: How would you describe your legacy on the OSCE?

Zannier: There is one thing that I am particularly attached to. I spent some time with the CSCE during the Cold War in the 1980s. At the time, the CSCE was a process of dialogue, it was difficult and tough at times, but it was a dialogue.

I don’t see this genuine dialogue anymore. Instead, I see recrimination, formal statements, and little appetite for proper consultation and debate. I tried to open up the Organization and therefore created the OSCE Security Days as a new format for dialogue. I also created good channels of dialogue between myself and OSCE heads of delegations.

I am of the opinion that we need to return to the old method where countries become the protagonists of the debate again and where they take responsibility for the Organization.

SHR Monitor: What should happen to certain countries who don’t seem to take this responsibility seriously? Indeed, some states very often block consensus and thus hamper the core functions of the OSCE. Should there be consequences for this kind of behavior?

Zannier: As Chief Administrative Officer, I would like to point out that there are some countries that are more than three years behind with their payments. My recommendation to the Chairmanship would be, that their voting rights should be suspended. In the context of the OSCE that would mean that they would not be able to participate anymore in the process of forming consensus.

SHR Monitor: Finally, what would be your advice to your successor?

Zannier: Listen to everybody, this is half of your success. Have a lot of patience, because very often you will encounter situations that you cannot solve quickly. Have perseverance, and finally, focus on a clear line. You need to continue going straight when others might be turning left or right.