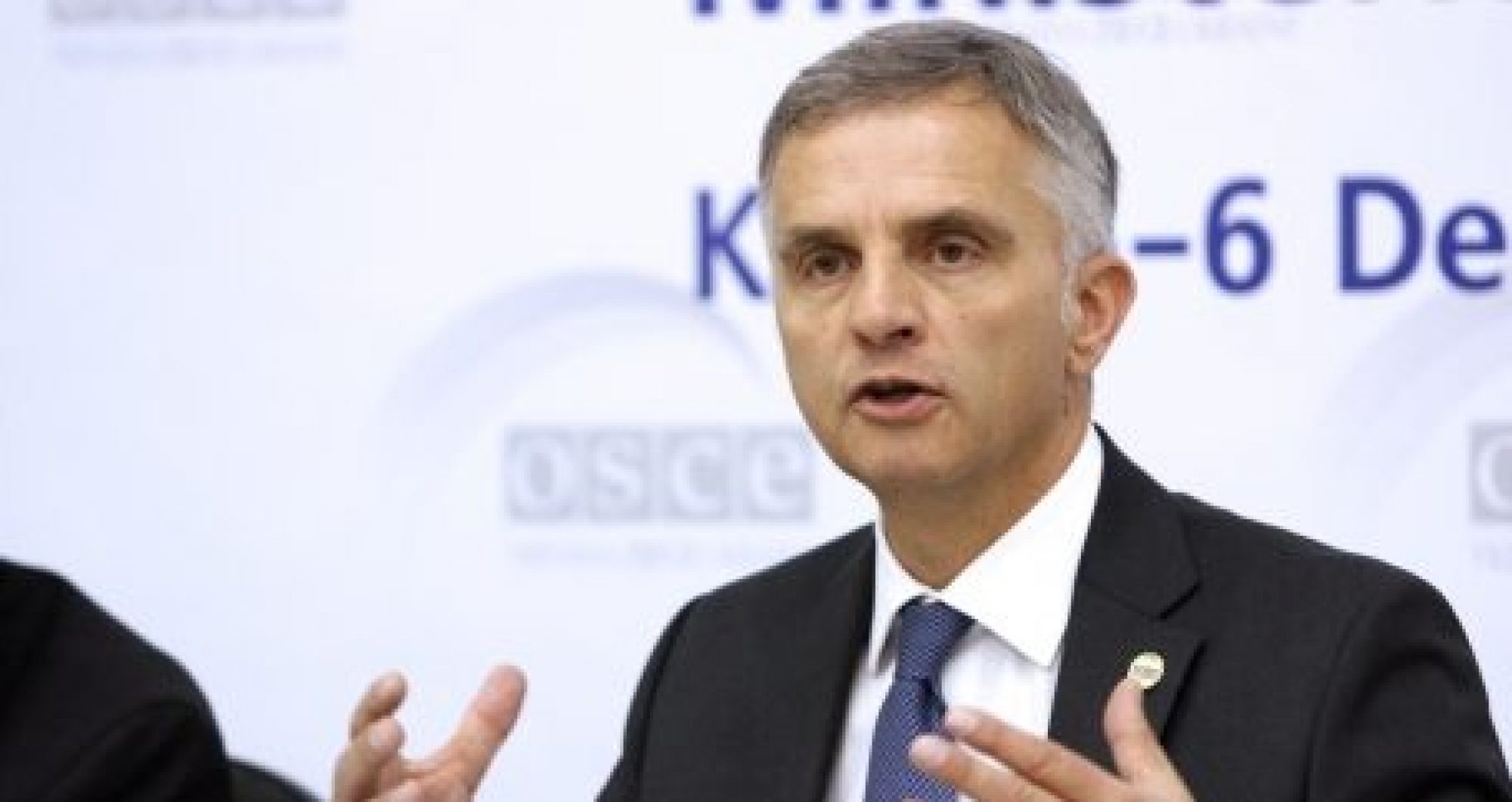 “Today, the OSCE is not the organization over which foreign ministers are racking their brains when they wake up early in the morning.” This was how Irish Foreign Minister Eamon Gilmore characterized the state of the OSCE at the end of Ireland’s Chairmanship in 2012. Indeed, the OSCE is still alive, but the organization has lost its appeal and is struggling for a raison d’être. Why did Switzerland volunteer, as the very first OSCE participating State, to chair the organization in 2014 for the second time after 1996?

Switzerland did not actively seek the Chairmanship, it did not push for it. The rather delicate history of the Swiss candidacy is poorly known. In 2011, it was initially Serbia, which ran for the 2014 OSCE Chairmanship. Before the UN General Assembly, Serbian President Boris Tadic argued with the 100th anniversary of the outbreak of World War I for Serbia’s OSCE Chairmanship. The symbolism of a Serbian OSCE Chairmanship 100 years after “1914” should demonstrate how much Europe had changed since then – also thanks to the OSCE. In Western capitals, however, Tadic’s argument made diplomats sit up. It was feared that Serbia could misuse its OSCE year for propaganda purposes. Thus, the Swiss government was discreetly asked if it could not take the OSCE Chair in 2014 instead of Serbia.

Bern solved the thorny request from countries like the United States or Germany rather skillfully. It refused to campaign against Serbia, but declared its readiness to launch a double candidacy together with Serbia for 2014-15. Switzerland would serve as Chair in 2014 and Serbia would follow-up in 2015. Switzerland campaigned for the votes for this innovative concept of two consecutive Chairmanships by saying that the OSCE’s trust in Serbia would lead to further stabilization of the Western Balkans. In addition, it was argued that such a two-year tandem Chairmanship would give the OSCE more continuity and more sustainable priorities.

It is no surprise that the Western Balkans is the top priority for Switzerland’s OSCE year. The region was already at the center of Switzerland’s activities during its first OSCE Chairmanship in 1996. It is also a key region for Swiss foreign affairs in general. Since the wars in former Yugoslavia in the 1990s, up to 170,000 persons from Kosovo live in Switzerland. In 2014-15, Swiss Ambassador Gérard Stoudmann will serve as OSCE Special Representative for the West Balkans and try to deepen the rapprochement between Belgrade and Pristina. Closely cooperating within the two-year double Chairmanship, Switzerland is improving bilateral relations with Serbia. In 2008, Switzerland’s quick recognition of Kosovo’s independence had angered the Serbs.

A second priority is confidence-building in the Southern Caucasus. Again, this region is already an established key focus of Swiss foreign policy. After the war between Russia and Georgia in 2008, Switzerland successfully mediated between the two countries and established itself as honest broker in the Geneva talks. With Angelo Gnädinger, Switzerland appointed a Swiss diplomat as OSCE Special Representative for the Southern Caucasus. In late 2012, Switzerland presented a four-year, 100 million CHF cooperation strategy for the region. Thus, this second OSCE priority for 2014 fits perfectly with Swiss foreign policy. In mid-December 2013, Ambassador Heidi Grau, who is heading the OSCE Chairmanship Task Force at the Swiss Federal Department of Foreign Affairs in Bern, explained in a public seminar at the Center for Security Studies (CSS) at the Swiss Federal Institute of Technology in Zurich (ETH Zurich) that the situation in the Southern Caucasus was very complicated and confessed that she was rather pessimistic whether substantial progress was possible in that region in 2014.

Ambassador Grau was also pessimistic with regard to the Swiss priority to modernize the OSCE’s conventional arms control regime. Since late 2012, the Swiss Foreign Ministry has always emphasized that the adaptation of the Vienna Document to modern warfare in the 21st century would be one of the top priorities of the Swiss Chairmanship. However, it now seems that Swiss diplomats realize that, realistically, no substantial progress can be expected in this realm in 2014. Swiss efforts will, therefore, focus on providing discussion platforms and on coming up with creative ideas to break the current impasse within the OSCE. Of particular interest are updating sub-regional regimes for the Balkans and for the Caucasus.

More optimism rules with regard to the multi-year OSCE reform process called “Helsinki plus 40”. At the Kyiv OSCE Ministerial meeting, Switzerland together with Ukraine and Serbia presented a roadmap for the OSCE reform process called “Helsinki+40“. Ahead of the 40th anniversary of the Helsinki Final Act of 1975, reforms are planned in eight areas that will strengthen the organization. Didier Burkhalter in Kyiv asked the other 56 OSCE members for high-level political engagement in three areas:

Independently, Burkhalter also urged the OSCE to think about mid-term planning beyond the 40th anniversary. Switzerland also plans to focus on the fight against terrorism and against the phenomenon of kidnapping for ransom as a source of terrorism financing. Switzerland will host an OSCE conference on this topic in April 2014 in Interlaken. Another promising topic in the field of dealing with transnational threats is the concrete realization of confidence-building measures in the cyber space just decided at Kyiv.

Even though at Kyiv it was possible for the first time in three years to adopt OSCE decisions in the human dimension, Swiss diplomats realize that progress in better implementing the OSCE human rights principles will be difficult. Swiss efforts will focus on the issues of torture and minority rights.

So much for the Swiss planning for 2014. However, OSCE Chairperson-in-Office Didier Burkhalter will simply not be able to act according to the well planned program. He will also be tested as crisis manager if an unexpected conflict breaks out. His “double presidency” in 2014 will also be constraining – he also serves as President of the Swiss Confederation in 2014, a very time-consuming job that annually rotates among the seven members of the Swiss Federal Council. While it certainly will be an advantage to be a president himself when meeting OSCE leaders such as Russian President Vladimir Putin or US President Barack Obama, many domestically important appointments in his capacity as Swiss president will prevent him from spending time as OSCE chairperson-in-office.

What can Switzerland achieve in 2014 in the OSCE? Masterstrokes cannot be expected. The culture of compromise has suffered in the last decade. Between Russia and the West, a new East-West gulf has opened. It is commendable that Switzerland will get involved with modernizing conventional arms control in Europe and mediating in the Western Balkans and Southern Caucasus. The OSCE Chairmanship gives Switzerland a chance to distinguish itself as an active and credible bridge builder. Its mediation efforts profit from the fact that Switzerland does not carry a historically strained rucksack and does not have ulterior strategic motives.  At the helm of the OSCE, Switzerland will thus make a solid contribution to stability in Europe and the European neighborhood. In addition, it will also make its established peace supporting activities more internationally visible.

Recent developments between Russia and the West do not augur well for the OSCE and the Swiss Chairmanship in 2014. Indeed, for the next 12 months, Didier Burkhalter will have to think quite a lot about the OSCE when he gets up early in the morning.

*Christian Nünlist is head of the think tank team “Switzerland and Euro-Atlantic Security” at the Center for Security Studies (CSS) at the Swiss Federal Institute of Technology in Zurich (ETH Zurich). He is the co-editor of Origins of the European Security System: The Helsinki Process Revisited, 1965-1975 (London: Routledge, 2009) and editor of the monthly online publication series CSS Analysis in Security Policy.