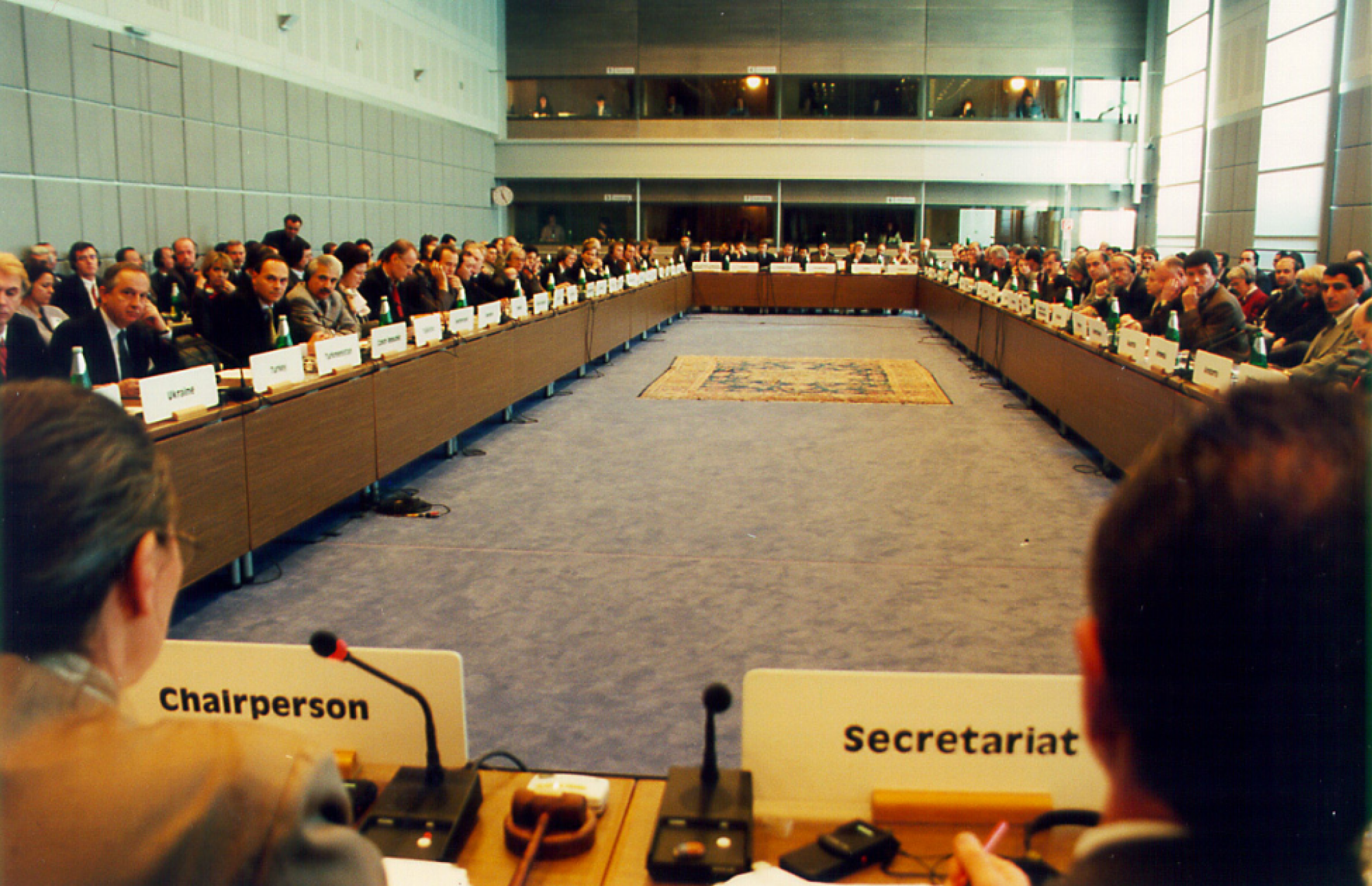 Decision-making in the OSCE

Since the early days of the Conference on Security and Co-operation in Europe (CSCE), decisions among CSCE states have been taken by consensus. This principle of the equality of the CSCE states was reflected as early as 1973 in the Final Recommendations of the Helsinki Consultations (Blue Book).[1] In the meantime, the consensus rule has been further codified in the Rules of Procedure of the OSCE, adopted in 2006, which reiterate the 1973 Blue Book recommendation and further specify that “decisions of the OSCE decision-making bodies shall be adopted by consensus. Consensus shall be understood to mean the absence of any objection expressed by a participating State to the adoption of the decision in question.”[2] Hence, the consensus rule and thus the equality of all participating States, no matter their geographical size, political or financial power remains a fundamental characteristic of the OSCE.[3] The Rules of Procedure do, however, provide participating States with the possibility to express a formal reservation or their specific interpretation of a given decision, while still joining the consensus. The so-called “interpretative statement” has to be attached to the decision in question as well as to the journal of the respective Permanent Council (PC) or Ministerial Council (MC) meeting.[4] Another fundamental characteristic of the OSCE is that all decisions are of a politically-binding nature (as opposed to the legally-binding nature in other international institutions). Hence, participating States make political commitments that they hold each other accountable for.

In addition, decision-making in the OSCE is based on an inclusive and relatively transparent consultative process.[5] Draft decisions in all three security dimensions may be tabled by the Chairmanship or any other participating State, or even a group of participating States. Usually, draft decisions are first negotiated in one of the PC’s “informal subsidiary bodies” (such as the expert-level committees). Once discussions on the expert level are completed, the draft decisions usually get passed on to the Preparatory Committee, which finalizes the draft decisions for adoption by ambassadors at the PC or foreign ministers at the annual MC meetings.[6]

Hence, the PC and the MC have decision-making power while the expert-level committees and Preparatory Committee are the places where draft decisions are negotiated and finalized for adoption. For example, the PC decides on the establishment of field operations as well as on the extension of their mandates, on dates and agendas of annual OSCE meetings, and on the OSCE unified budget. The PC also takes some substantive decisions for example in the areas of combating illicit drug trafficking, combating terrorism and trafficking in human beings or promoting tolerance and media freedom. It seems, however, that the bulk of decisions adopted by the PC are of an organizational nature and that most substantive decisions are left to be adopted by the annual MC meetings at the end of the year.

This practice of leaving most substantive decisions to be adopted by foreign ministers at the end of the year creates a lot of pressure on the MC and its preparation. Indeed, in the run-up to the MC meetings, it is not unusual that delegates negotiate into the early morning hours until consensus can be found on all (or most) draft decisions. This is not only due to the large amount of draft decisions under negotiation but also to the consensus rule. The consensus principle brings with it a lot of legitimacy for every decision that is adopted, but it also often leads to difficult, lengthy and painstaking negotiations and indeed sometimes to deadlock. To bring everybody on board is difficult but consensus becomes impossible if a participating State decides to unilaterally block a decision to advance some purely national interests or if states link unrelated issues for leverage. Such deadlock can have negative consequences for the daily workings of the OSCE and may lead to criticism of the OSCE in the media and elsewhere.

For example, foreign ministers have failed to adopt a political declaration since the Porto MC meeting in 2002, due to diverging views on the protracted conflicts and other contested issues. And there have been no MC decisions in the human dimension for two years, mainly because of the opposition of one participating State. This should be avoided as it only plays into the hands of the critics who see the OSCE as losing its relevance. This being said, it is important to emphasize that the consensus rule (and the equality of all states) should remain untouched. There are other ways to avoid unilateral blocking of decisions and to ease the pressure on the annual MC meetings.[7]

First, it would be useful to allow the PC to adopt more substantive decisions throughout the year. The PC is the central place for peer review, where participating States debate the implementation of OSCE commitments. However, it is also a decision-making body that in addition to “governing the day-to-day operational work of the Organization”[8] is concerned with taking substantive decisions. In this way, there would be less pressure on delegates to negotiate a large package of MC decisions and the debate at the MC itself could become more focused. Second, the political games and pressures around the MC could be reduced if participating States adopt a more “value creating and cooperative approach” instead of a “competitive, value claiming approach.”[9] Cooperative, value creating behavior is associated with advancing common interests instead of purely national self-interests and can be observed when participating States try their best to join consensus on a given decision and mutually search for creative solutions. Creative solutions that will satisfy all states can, however, only be found if there is enough information available on the underlying interests of all states concerned. This means that states will have to be fair enough to communicate reasons for their positions. Eventually, such an approach will help not only to maintain and increase the prestige and credibility of the Organization but also to ensure its efficient functioning.

The next Ministerial Council meeting is scheduled to take place in Kiev, Ukraine, on 5 and 6 December 2013. Let’s hope that participating States will adopt a value creating approach to negotiations that will lead to a package of decisions in all three security dimensions and to a clear political message supported by all 57 participating States.

[1] Final Recommendations of the Helsinki Consultations, Helsinki 1973, available at: http://www.osce.org/mc/40213

[3] There exists one particular exception to the consensus rule which was decided upon in 1992 at the Prague meeting of the CSCE Council, amid the worsening human rights and rule of law crisis in the then Federal Republic of Yugoslavia. In order to be able to protect human rights and the rule of law within the CSCE region – regardless of the opposition of the state concerned – CSCE states suspended Yugoslavia from the CSCE in May 1992. This remains to date the only occasion the so-called “consensus minus one” provision was applied. To a certain extent, the Moscow mechanism as well as the Berlin mechanism can also be considered an exception to the consensus rule, the former of a substantive nature and the latter of a procedural nature. For more information on this, see Bloed, Arie, ed. (1993). The Conference on Security and Co-operation in Europe, Analysis and Basic Documents, 1972-1993. Dordrecht; Norwell: Kluwer Academic Publishers, pp. 20-21.

[4] See paragraph IV.1(A)6 of the OSCE Rules of Procedure

[5] The inclusiveness and transparency of the decision-making process was significantly improved with a decision adopted at the 2006 Brussels Ministerial Council (MC.DEC/17/06 of 5 December 2006) on “improvement of the consultative process”, available at: http://www.osce.org/mc/23191. With this decision, participating States introduced a committee structure, following the recommendation of the 2005 Panel of Eminent Persons.

[6] This is a simplified version of the OSCE decision-making process. For the sake of completeness, the role of the Forum for Security Cooperation (FSC) has to be considered as well. The FSC discusses and takes decisions in the area of military security. For a complete overview consult the OSCE Rules of Procedure.

[8] See paragraph II.(B)4 of the OSCE Rules of Procedure

[9] For more information on the two approaches in negotiations, see for example Lax, David A. and Sebenius, James A. The manager as negotiator, 1986, (New York: The Free Press).